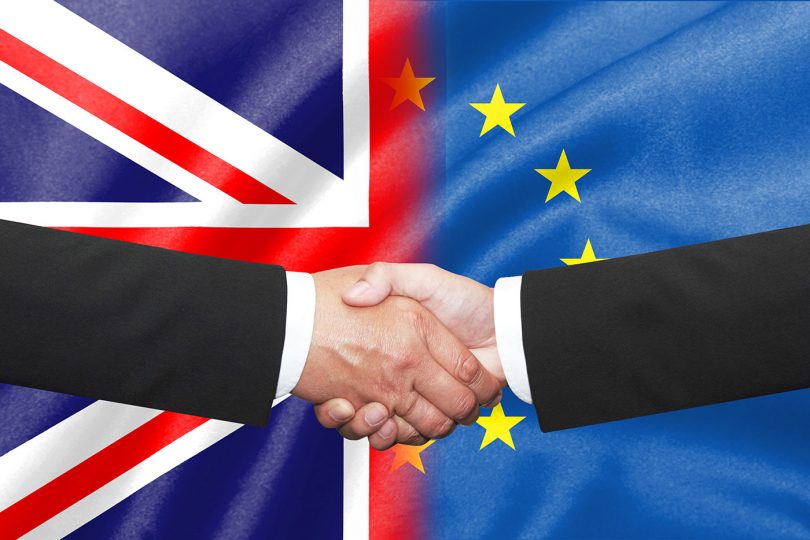 Short-term political pressures, plus a lack of long-term strategic economic thinking, make it likely the UK will agree a trade deal with the EU. Any such deal is likely to be very unfavourable to the UK in several key areas, as will quickly become obvious. Far from forming the basis of a durable new relationship between the UK and the EU, the deal will be a source of continued friction and acrimonious disputes. Within a short space of time, the UK government will regret signing it and will be looking to escape from it.

The UK government is likely to agree a trade deal with the EU shortly. This will not be cause for any optimism on the UK side, as the deal will be highly unfavourable to the UK.

A deal will be agreed because the UK is not prepared, politically, to grasp the nettle of ‘no deal’. Going for no deal would involve being prepared to face down not just the EU, but a host of domestic UK business lobbies, the bulk of the UK press, and a large chunk of the parliamentary Conservative party. In the context of the ongoing Coronavirus crisis, this just isn’t very likely.

It will also be agreed because the government and the UK political class more generally still don’t understand the strategic economics behind Brexit. There is a widespread misconception that there is a massive difference between the economic impact of no deal and of the kind of limited free trade deal that is under discussion. In fact, as we have previously argued, the benefits from a deal in terms of trade barriers are quite modest – and almost certainly offset by the greater freedom of action in areas like tax and regulation.

The UK political class also remains entranced by the notion that ‘access’ to the EU market is key for UK prosperity. It is not widely known that UK goods exports to the EU have been stagnant, in volume terms, for nearly two decades, while UK exports of goods to the rest of the world have risen by 75% (see Chart 1). 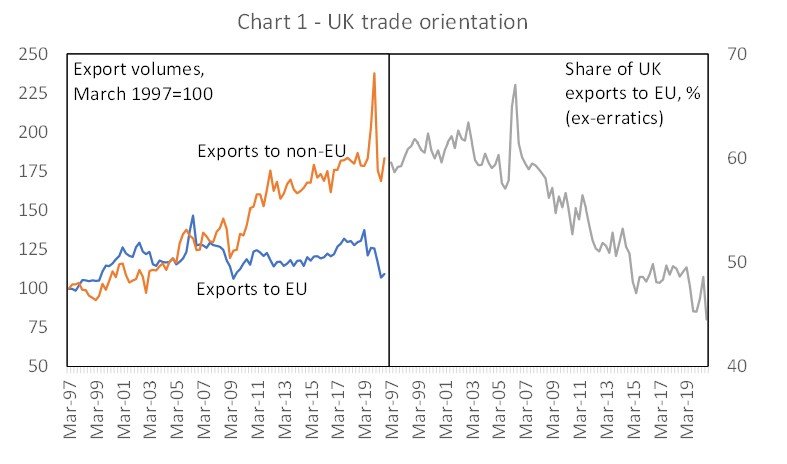 Nor is it understood that the steady decline in the EU’s share of UK trade is going to continue, and probably accelerate, over the next two decades. This will be the result of higher trade barriers with the EU but much more importantly, of markets in the rest of the world growing far faster than EU markets. The EU will account for just 5-6% of world growth to 2040. The share of UK goods exports going to the EU may be as low as 30% by then, despite geographical proximity.

Moreover, with services now over half of UK exports and even less bound by economic geography (over 60% of UK services exports are already to non-EU destinations), the share of total UK exports of goods and services to the UK will be even lower. Note any UK trade deal with the EU is likely to do very little for services over and above WTO rules.

A trade deal with the EU will thus become increasingly less valuable over time for the UK – especially given the onerous strings that will be attached to it. And those strings will cause massive problems long before we get to 2040.

The biggest area of problems will be the ‘level playing field’ conditions the EU is insisting on. Not only is the EU insisting on ‘non regression’ from existing standards in areas like the environment, labour and tax policy, but it is also demanding a ‘ratchet clause’ whereby if the EU changes its rules in these areas, the UK could be penalised with tariffs if it fails to follow suit. The EU also demands the right to unilaterally decide if such divergences have occurred and react to them without independent arbitration. Note that this might also include the ECJ deciding to ‘reinterpret’ existing rules, not just consider new ones.

This set of demands amounts to an attempt to lock the UK into backdoor dynamic alignment with a massive area of EU regulations. It is also a recipe for endless disputes as the UK and EU fall out over interpreting changes to rules in these areas and what might be appropriate remedies. Over time, such disputes and associated trade ‘retaliation’ would whittle away the value of a free trade deal. Anyone who thinks a deal with the EU will create sufficient ‘goodwill’ that such regulatory attacks on the UK won’t happen is being very unrealistic.

It’s also worth noting that the EU’s plans for its future trade relationships with the rest of the world mean these kinds of disputes are going to become more and more common with all its trade partners. The EU is now intent on using environmental arguments in particular as an excuse for ‘border taxes’, i.e. new forms of protectionism. Having a free trade deal with the EU will be no protection against this.

The EU is also trying to set up a highly unequal arrangement for state aid. Some limitations on state aid are normal in modern free trade deals, but the EU quite incredibly is demanding that massive areas of its subsidies (such as the recent package related to the Coronavirus crisis) be exempted from such rules while similar UK subsidies are not. We can also expect this area to be one that features endless disputes, with the EU interpreting any perceived divergences from its state aid rules by the UK as ‘anti-competitive’ and demanding remedies.

A deal with the EU is also likely to include unpalatable and unstable arrangements on fisheries. The UK government has already made a bad mistake in allowing fisheries to be linked to the broader deal but is now also considering a lengthy transition period to give EU fishing industries time to adjust to lower quotas. It is easy to see what will happen here – after the deal is signed, the EU will threaten to collapse it in its entirety long before the ‘transition’ comes to an end, unless the EU’s privileged and disproportionate access to UK waters is maintained.

The Northern Ireland protocol (NIP) will be another massive headache. The EU has spent much of the last four years grandstanding about how its single market is ‘under threat’ from ‘substandard’ or ‘cheap’ goods crossing from Northern Ireland to the Irish Republic. This argument has always been nonsensical given the pitifully low level of Irish cross-border trade, but we should not imagine they will stop using it.

There is currently no agreement between the EU and UK as to what constitutes goods ‘at risk’ of crossing the border and so potentially subject to tariffs. Expect this to continue, with the EU constantly trying to widen the definition of such goods in order to exert pressure on the UK not to sign third country trade deals or diverge from EU regulations. Also expect ongoing complaints from the EU that the UK is not implementing the NIP properly and attempts to penalise the UK for supposed shortfalls in this area. Finally, we should also expect the EU to attempt to use legal processes (including in UK courts) to extend EU competition law (which applies to Northern Ireland under the protocol) to the rest of the UK.

The above list of problematic areas is not exhaustive but gives a flavour of what is likely. The EU’s key aim is to maintain as much economic and political control over the UK as possible. Anyone thinking a free trade deal will see the EU allowing abandoning this aim and allowing the UK to drift away from its orbit is kidding themselves. The EU will use every possible element of any deal (and as we have noted there are many potential bad elements) with the UK to harass the UK economically and try to force it back into close economic alignment.

The UK government will quickly regret signing such a deal as it becomes clear that it offers only an endless process of disputes with the EU in return for modest and rapidly declining economic benefits. As a result, it would make most sense not to sign such a deal at all – because all the problems associated with ‘no deal’ will at best be temporarily averted and all the many benefits of no deal will be delayed or lost. In addition, it should be clear from the above that the best way to deal with potential economic and political harassment from the EU is to move as rapidly as possible to reorient the UK’s economy away from trade with the EU, reducing the pressure that the EU can exert.