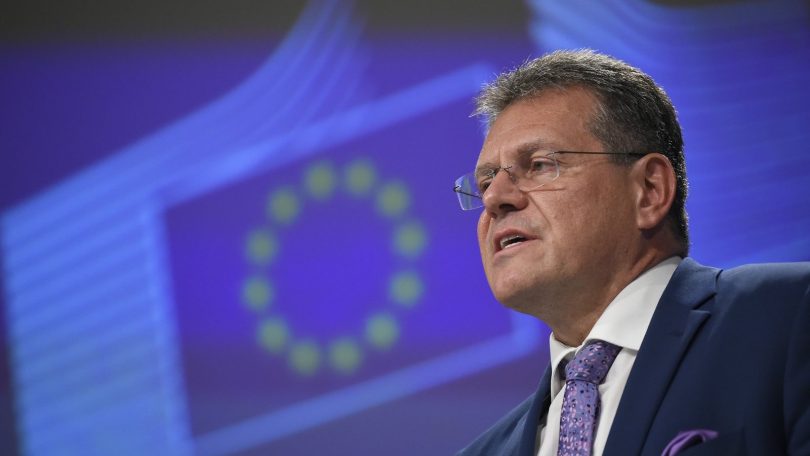 Our regular contributor Sir Peter Marshall has recently written to the EU official charged with negotiations over Northern Ireland, and allows us to publish the text.

We have been given to understand that, when it meets this week,  the EU/UK Partnership Council will discuss the Northern Ireland Protocol. This is welcome news: but unless you are able to display more flexibility than is indicated in paragraphs 16-19 of the Conclusions of the Special Meeting of the European Council on 24 and 25 May,  I fear there will be little meeting of minds.

Let us start with the Conclusions.  Paragraph 16 states that the Trade and Co-operation Agreement,  together with the Withdrawal Agreement ,  “provides the framework for our relations with the UK”. Article 50 of the Lisbon Treaty,  on the other hand, specified that what has to be taken into account is the framework for the future relationship between the United Kingdom and the Union  which,  as we all know,  is a very different matter.

The same deliberate inversion occurs in both the Withdrawal Agreement and the Political Declaration.   Both texts,  in consequence,  are likewise at variance with terms of Article 50.  As the progeny of the Guidelines which the European Council adopted  on April 29, 2017,  and insisted should be the sole basis of negotiation for our withdrawal from the EU,  they could not but be so.

The first paragraph of the Directives of the New Partnership,  approved by the European Council on February 25, 2020,  states that the Union negotiated and concluded with the United Kingdom an agreement setting out the arrangements for its withdrawal “in accordance with Article 50”  (italics again mine).  That is a manifest untruth,  as is evident from even a cursory reading of the introductory paragraphs of the EU Guidelines.

The ostensible reason  for sidelining Article 50,  as advanced in the third unnumbered introductory paragraph of the EU Guidelines,  is that “the UK decision to leave creates significant uncertainties that have the potential to cause disruption”.  “With this in mind”,  the paragraph continues, “we must proceed according to a phased approach giving priority to an orderly withdrawal”.  “The main purpose of the negotiations”,  according to numbered paragraph 4 of the EU Guidelines,  “will be to ensure the UK’s orderly withdrawal so as to reduce uncertainty, and,  to the extent possible,  to minimise disruption caused by this abrupt change (sic)“.

The contention that priority must be given to “an orderly withdrawal” is spurious.  It would not survive the briefest of rigorous examinations in a court of law that knew its business.  It would be instantly exposed as a subjective ploy to circumvent the objective provisions of Article 50,  to the clear advantage of the Union,  and to the no less clear disadvantage of the UK.

The over-arching objective of the Guidelines has been to ensure that we are not seen to gain from our withdrawal,  and thus encourage “contagion”

Paragraph 17 begins with an irrelevant statement of the obvious:  “a non-member state cannot enjoy the same benefits a member”.  No-one on this side of the Channel has suggested that it can.  All we want is to be treated like anyone else as a third country.

“Relations with the UK”,  paragraph 17 continues, “can under no circumstances (italics mine) undermine the integrity of the Single Market, the Customs Union or the EU’s decision-making autonomy”.  If we are to take that sweeping statement at full value,   our interdependent existence,  assailed by numberless current issues,  by the pandemic,  by the necessity to control  climate change, and by the prospect of rapid technological advance affecting every aspect of our lives and livelihoods,  would make it necessary to interpret the words “undermine the integrity” very broadly indeed.

“If the application of this Protocol leads to serious economic,  societal or environmental difficulties that are liable to persist,  or to diversion of trade, the Union or the United Kingdom may take appropriate safeguards”.

As was to be expected,  the question of diversion of trade has so far attracted  attention.  But the rest of the sentence,  in something like its full absurdity,  is now heaving into view.

A few basic questions:  who decides that the application of the Protocol leads to serious difficulties?  And why only of an economic,  societal or environmental nature?  How can you conscientiously  judge whether they are likely to persist without waiting a little to see what actually happens?  In which case,  is it not liable to become a matter of locking the stable door after the horse has bolted?

And what are we supposed to understand by the meaningless phrase “appropriate safeguards”.  What are they? Who decides whether they are appropriate? The implication of the Article as whole is that the answer to the latter question  would come out in the wash,  in the sense of seeing what the other party does by way of “balancing” safeguard action   ie retaliation.

Exasperating though the content of Article 16 may be,  it is as nothing when compared with the mindset which authorised,  or insisted on, it.   What scale of values is it which,  in full knowledge of the complexity and the delicacy of the situation on the Emerald Isle,  as outlined in the Belfast Agreement and the twenty-three preambular paragraphs of the Protocol itself,  can even contemplate the imposition of a regime so likely to lead  to civil unrest  and even violence that a special Article has to be added, validating emergency remedial action?

Whichever way you look at it,  the Northern Ireland Protocol is a peculiar injustice,  knowingly visited on the people of Northern Ireland.  It is the direct consequence  of the EU’s  determined refusal to accept its obligations under Article 50 to take account of the framework for our future relationship when negotiating our withdrawal agreement,  The present situation is unsustainable.. Everyone knows it.

Let us now return to the May 24-25 Special Council Conclusions.  In paragraph 18,   Mr Vice-President,   you are invited to continue your efforts to ensure full implementation of the Agreements, including in the area of citizens’ rights,  fisheries and level playing field “making full use of the instruments under the Agreements,  in continuous and permanent dialogue with the Council and its preparatory bodies in accordance with established practice”.

That reads more like a confrontation with a hostile stranger than a partnership with a near neighbour.   Paragraph 18 is depressing confirmation of the cold comfort of  paragraph 17.  In expressing the determination of the  European Council to remain seized of the matter, and to continue to be united in its engagement with us,  it is warning us that nothing has changed in the five years since the referendum.  Talleyrand said of the Bourbons that they had “learned nothing and forgotten nothing”.  We would all be the poorer if that were to be the case with the EU.

In a few days’ time the G7 will be gathering in Cornwall for what will almost certainly be the most important meeting in its fifty year history. If Coronavirus circumstances permit,  COP 26 in Glasgow in November bids fair to be the largest international meeting ever held in this country. Should some part of the “continuous and permanent dialogue” mentioned in pragraph17 be with us?

With highest respect and every good wish