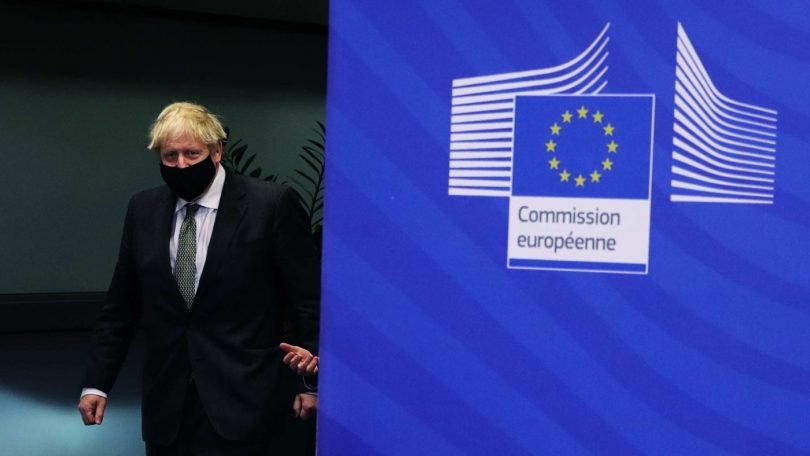 Lee Rotherham has examined the text of the Christmas Eve Trade and Cooperation Agreement. He sees serious faults that could lead to future problems, but future improvements possible in fisheries. The raft of new committees supervising the deal is a cause for concern

St Gregory of Tours opened his great History of the Franks with a simple and somewhat unhelpful summary of contemporary events: “A great many things keep happening, some of them good, some of them bad.” Much the same can be said of the Brexit Treaty. I would suggest on close review, the sum rests far more in the positive column, but there are also some heavy minuses to debit.

Given that the preamble alone exceeds the normal length of an article, any reflection has to confine ourselves to a couple of elements. Anyone looking for nerdy detail can read a longer version on our Reports page.

The immediate standout elements are those which are not in the text. The Services section has been left paddling pool depth, though to be fair it has never formed the deep end, even within the EU treaties. Alarmingly, the Northern Ireland Protocol still stands unfixed, save for some permissions allowing relabelling of goods from Britain to take place in designated warehouses. As the Protocol was meant to be only a backstop this remains a defeat, though one locked in by Barnier’s self-interested insistence on sequencing and the rolling incoherences of the May team’s strategy.

Many other omissions, however, are deliberate. Overall, the texture of the treaty largely feels like an FTA. Lots of the elements could have been pulled from an EU bilateral that a country like Malaysia or the US might have signed. Indeed, the cynic is left wondering if the plug had been pulled in, say, October, how many of these sections would have been cobbled together as mini-deals. I suspect a lot, but that’s a secret for the EU’s archives in Florence and future memoirs of retired EU negotiators to ultimately yield.

There is an element of elasticity in some of the more contentious areas. Contrary to what was being spun by the likes of Denis MacShane, the Human Rights clauses do allow reform. The text recognises the importance of the principles behind the European Convention on Human Rights, but does not require the UK to retain the calamitous Human Rights Act 1998. It merely states that if the HRA is removed there should be some other domestic framework to replace it – which might well be the mooted ‘Charter of Rights and Obligations’.

The Level Playing Field similarly includes a degree of suppleness. The UK can indeed go out and identify red tape, whether to do with environmental costs or safety or business. It can fix these, so long as it is guided by the basic international standards (rather than more prescriptive EU ones). If the changes that follow mean that a British business gets a noticeable competitive advantage, then the Commission can apply redress. It still has to prove its case, the penalty can’t be escalatory but has to be of equivalent value, and a review panel could find it in the wrong.

Collectively this provides a mechanism that allows the UK to diverge from existing EU red tape where rules are more of a burden than an advantage, and particularly where non-EU commerce and universally-applied costs are concerned. Importantly, it does so in a way that does not deter the UK from pursuing reforms, since any EU retaliation is both uncertain and clearly bounded.

Better yet, I would also suggest that the Commission may find it politically embarrassing at times to challenge regulatory diversion, because it would have to demonstrate the extent to which its own legislation carries considerable red tape costs. Furthermore, I suspect this will encourage the EU side to reflect on regulatory burdens, and might encourage economic liberals within the EU institutions to pursue proper cost-benefit analysis of proposed laws. It could even rejuvenate the Commission’s wheezy regulatory review audit. If so, it would be a remarkable parting gift to the reformers within the EU27 if it did turn out this way. However, that’s an optimistic take — Brussels rarely misses the opportunity to miss an opportunity.

More of a concern is the retention of the Precautionary Principle. This is not so much of an issue on the UK side, but it does raise the prospect of the Commission applying it as a protectionist tool. The problem is that the treaty constrains challenges when it is used – by doing so it effectively assumes that applying the precautionary principle is bound to be right. This creates a loophole which could be abused to obstruct trade. It may also prove a strategic disincentive to the UK exploiting emerging biotechnologies. Direct retaliation becomes difficult because any response using the same excuse could be more easily identified as an act of bad faith.

Another area of real concern we can point to is the size and complexity of the architecture underpinning the agreement. There will be no fewer than 19 new committees and four working groups beavering away behind the scenes, all in the mould of Brussels comitology. Here the flexibility is double-edged. These committees can provide fixes to gaps that people overwhelmingly want to plug, like finding a replacement system to EHIC (a structure that the Spanish badly need to more easily recoup costs of treating UK pensioners abroad). The problem arises when they go tonto, as they inevitably over time will, signing up to programmes with political objectives aiming at ever closer union.

This risk is compounded by the fact that UK money is already from 2021 going into supporting participation, though the figure is expressed as a percentage (‘0.5% rising to 3%’) so the extent of our commitment is presently unclear. However, the combination of a largely blank sheet of programmes, plus money that is now there and ‘needs to be spent’, risks generating a civil service cadre incentivised to keep rebuilding links to Brussels.

Worse, as things presently stand this will happen without any clear oversight procedures from Parliament. The saving grace here is the legal fragility of what these committees spin. A good minister who spots excessive integration or poor deals can sweep agreements away quite easily under the treaty terms. But if left to build up over time, and to interlock with other new agreements and cement into multi-year budgets, then the shanty becomes more of a permanent structure.

These new committee structures and powers, along with the deal’s various opportunities for creating red tape, should weigh heavily now in the mind of all MPs. Taking back control was about bringing powers back to Parliament for proper oversight. The EU system, with its hidden comitology processes, has immense voids where oversight is impossible, undertaken in regions in the legislative upstream coloured black on the lawmaker’s charts. That now needs to change (and here are some suggestions).

But the big argument that will be had is over fish. The core problem is this: there was a massive win to be had under the international default. A bit of a win has happened. But this is being sold as bigger than it actually appears to be.

We still need the cold facts. It’s not surprising there was the reported confusion amongst EU27 Governments about what the deal on fish meant, because it’s not especially clear from the text. The changes in catch are in percentages, not tonnes and not value. They start from 2021, so any immediate gain is not clear. But what does seem clear is that they are not as good as they could have been, and perhaps by a long way. Even the clauses on tackling quota-hoppers don’t appear to have the same ambition as the proposals that led to the Factortame Case three decades ago, while we were still EU members.

Those figures will come out soon enough and people will be able to make an informed call. An early pointer lies in the limited amounts of subsidy already being announced on the EU side for their trawlermen losing out.

It is worth noting how the fish deal can be changed, because there has also been a confused reference to it running out in 2026. Sadly, that’s just when catch share gets bartered again, and in a process that has no incentives for change. But there are as I see it five options within the treaty, three of which are nuclear (though with varying kilotonnage).

Option (i) is to terminate the fisheries agreement under FISH.17 (p273), also collapsing parts of the treaty relating to Trade, Transport, and possibly Aviation. Option (ii) means withdrawing from the whole of Part 2 of the Treaty under Article OTH.10 (p281), which means most of the trade elements. Option (iii) is withdrawing from the whole of the treaty under Article FINPROV.8 (p405). Realistically, I don’t see much political appetite for these routes and it decreases with each one in turn.

However, there is also option (iv), which allows for negotiating better arrangements on quota-hoppers though the regular meetings of principals at the Partnership Council, via ORIG.31(p41). I’m not sure EU Member States necessarily spotted this.

Finally, there is a real option to renegotiate the fisheries terms, tucked away in a separate part of the text. My reading is that fisheries could be included as part of the LPF/trade rebalancing through LPF.9.4.4 (p216), to be traded off against something else that the Commission might choose to add to the table. This does come at incidental risk of collapsing all these parts of the treaty if talks go really badly, so there is a slight wild card element possibly in play here.

Both these options do mean that the UK could seek to improve the fisheries deal in the future without unravelling the entire text. This becomes a matter of honour if it turns out that Ted Heath’s infamous sell out – “swallow the lot, and swallow it now” – has only been very partially redeemed.

One is reminded of Seneca’s observation: “Truth strikes deep if she finds the right kind of advocate.” So far we have not seen that with the confused and unconvincing spin on fisheries. Until we know the unvarnished detail, the significant gains that do emerge from across this treaty will hang under a shadow of a great lost opportunity and an enduring injustice. One that will still need to be fixed.