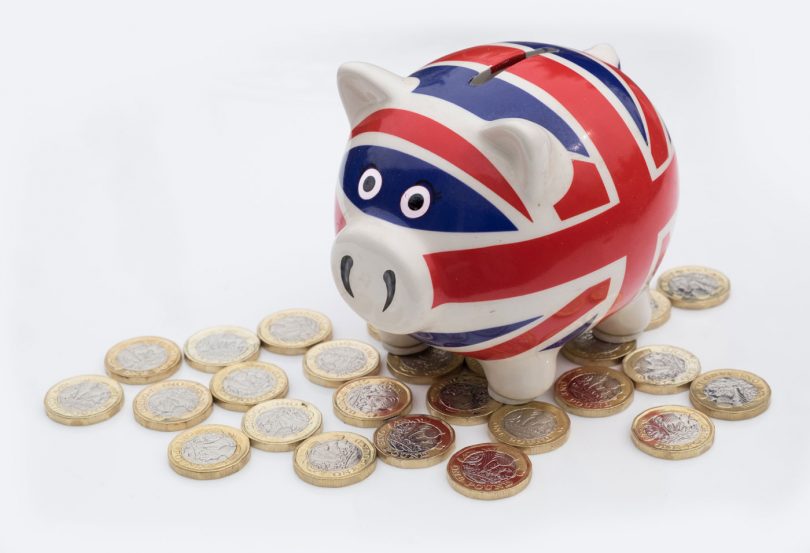 The ‘crashing out’ propaganda claims that leaving the EU on WTO terms will result in catastrophe. This Report shows precisely how it can bring huge economic gains.

Over recent weeks, there have been renewed efforts to claim that the UK leaving the EU on WTO terms will result in economic catastrophe. The general approach has been to claim huge downsides while ignoring or minimising possible upsides. We have argued repeatedly that claims that UK trade and GDP will collapse in case of a move to trading with the EU on WTO terms are hugely exaggerated, being based on wildly unrealistic assumptions about productivity shifts and other factors.

Trade barriers will rise and bilateral trade volumes between the UK and EU will decline, to some extent, in a WTO scenario. But some of what will also happen is that UK exports will be diverted to the home market and other destinations, and EU imports will be displaced by UK production and imports from third countries (weaker sterling will also help this shift).  Because of these offsetting shifts in sales patterns, the net effect on UK GDP of a WTO Brexit will be a small fraction of the effect on UK-EU trade. Nobel laureate Paul Krugman estimates for the US that even a 70% fall in trade would only cut GDP by 2%. Using the same approach, we estimate the likely effect on UK GDP from rising UK-EU trade barriers at just 0.5% of UK GDP. Distinguished economist Ashoka Mody suggests a similar figure, which would amount to £10.5bn. This is ten to fifteen times smaller than the effects the Treasury and Bank of England are claiming.

Meanwhile, there are a range of potential positives from a WTO-based Brexit that could outweigh these losses:

the UK fishing industry could potentially double in size after Brexit, as the UK takes full control of a natural resource which currently is mostly harvested by EU boats. Estimates by Napier (2018) and others suggest a rise in catch of up to £700-800mn per year which with positive supply chain effects could see a total boost to output of around £3bn per year – already offsetting a third of the possible trade losses.

Ending budgetary payments to the EU

over the last three years net contributions to the EU have totalled £10 billion per year, or around 0.5% of UK GDP. Ending these payments alone essentially cancels out the possible trade-related losses.

The CAP costs British taxpayers twice over – once through subsidies paid to farmers and twice by keeping food prices artificially high. OECD data suggests EU farm prices are around 5% above world prices and our estimates based on this data suggest UK consumers pay around £2billion per year in higher prices due to the CAP.

The EU imposes high tariffs on foodstuffs and also some other areas including clothing and textiles, where applied tariffs on third-country imports are 6-8%. UK tariff revenue from these items totals about £1bn per year but gains to consumers from the abolition of tariffs on these items could be much larger than that as domestic prices for clothing and textile products generally (not just the imported items) would likely fall. With textile and clothing spending at £82bn per year even a 3% price fall would boost consumer incomes (and potentially spending) by £2.5bn.

More broadly, the IFS has estimated that the abolition of all EU tariffs would cut consumer prices by up to 1.2%. With UK consumer spending at £1.3tn in 2017, this implies gains for consumers of up to £15bn (note tariff cuts discussed here would reduce budgetary gains by £1-3.5bn depending on how broad they were).

A targeted immigration policy could keep the fiscal benefits accruing to the UK from high-skilled immigrants while cutting the burden associated with the lower-skilled. The Migration Advisory Committee suggests the fiscal ‘break-even’ point for EEA immigrants is a salary of around £30,000 per year while government figures suggest benefit payments to EEA nationals of around £1.6bn per year. This latter figure could be reduced to near-zero by appropriate immigration rules.

An EU assessment of the benefits of striking free trade deals with a range of third countries including the US and Asian economies suggested these could boost EU GDP by 1.2% and by up to 2% if productivity effects are allowed. For the UK alone this would represent an annual gain in GDP of £25-£40bn. But the figures could easily be higher for the UK due to the UK’s bigger trade with non-EU countries.

The cost of EU regulations is hard to calculate but the EU’s own estimates suggest the cost to business is large, as much as 4-6% of GDP. Removing all of this is unrealistic, but even reducing the burden by 25% would potentially yield savings of 1-1.5% of UK GDP or £20-£30bn per year in business costs. And the positive impact on GDP could be bigger than this: The UK better regulation taskforce in 2005 reported a Danish government estimate implying that for every £1 decline in the administrative burden of regulation, GDP could rise by £2.70. Importantly, we are not talking about a regulatory ‘race to the bottom’ here – just smarter regulation better targeted at the interests of the UK economy. 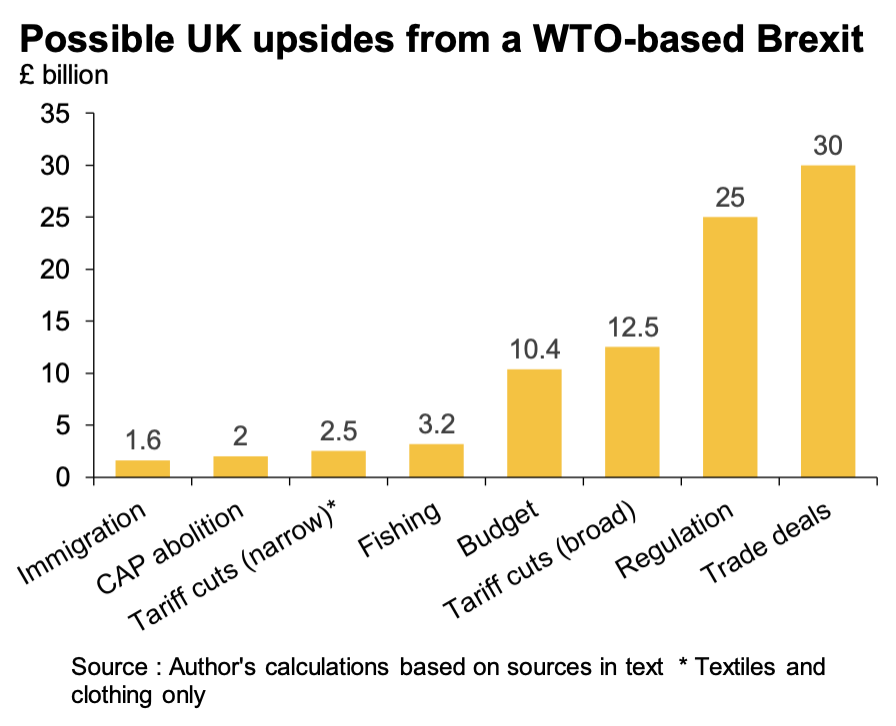 Adding all these upsides together (with appropriate netting on the budgetary side), we can easily come to a figure for net gains of around £80bn or nearly 4% of GDP, far outweighing the potential trade costs mentioned earlier of £10.6bn or 0.5% of GDP.

Now it is quite likely that not all the upsides would materialise, and also that trade costs might be higher. But even more pessimistic – but still realistic – takes on trade costs such as in the German IFO study of 2017, CEP (2017) , Gudgin, Coutts et al (2017) or Ciuriak et al (2018) suggest costs of only around 1.5-2.5% of GDP. The midpoint of these estimates is still only half of the potential upsides we have identified.

A smart WTO Brexit with well-designed trade, immigration, agricultural, fishing and regulatory policies would, far from being a ‘disaster’, have an excellent chance of delivering substantial long-term net benefits.

Professor David Paton, Chair of Industrial Economics at Nottingham University Business School, and Co-Editor of the International Journal of the Economics of Business