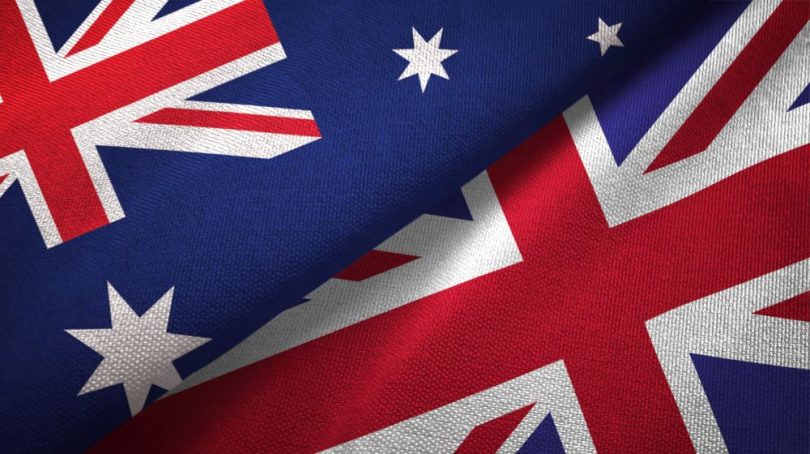 Fears of a ‘surge’ in ‘cheap/low quality’ Australian food imports that will ‘undercut’ UK farmers are greatly exaggerated: imports of sensitive items like meat from Australia would be likely to remain modest and the biggest losers would be likely to be other countries exporting to the UK, such as Ireland. Claims that Australian production standards are ‘low’ are not supported by the evidence and make little sense in the context of widespread factory farming in Europe and the UK. Suggestions that the UK would have to offer similar terms to other FTA partners in the future are also inaccurate.

A variety of objections have recently been raised by farmers’ unions and some politicians to liberalising agricultural trade with Australia in the context of a free trade agreement (FTA). These claims appear to be largely bogus and motivated by a mixture of protectionist instincts, special interests (not necessarily UK ones) and political aims.

A large range of Australian farm products face restrictions in the UK market. Much of the concern raised about the proposed trade deal, however, has centred around meat imports. Imports of meat from Australia are severely restricted by the protectionist structures carried over from the UK’s EU membership. These include restrictive quotas (some not tariff-free) for meat imports and very high tariffs on out-of-quota imports (up to 80% by value, in practice a prohibitive level). There are also notable non-tariff barriers to beef imports such as those relating to the use of growth hormones. 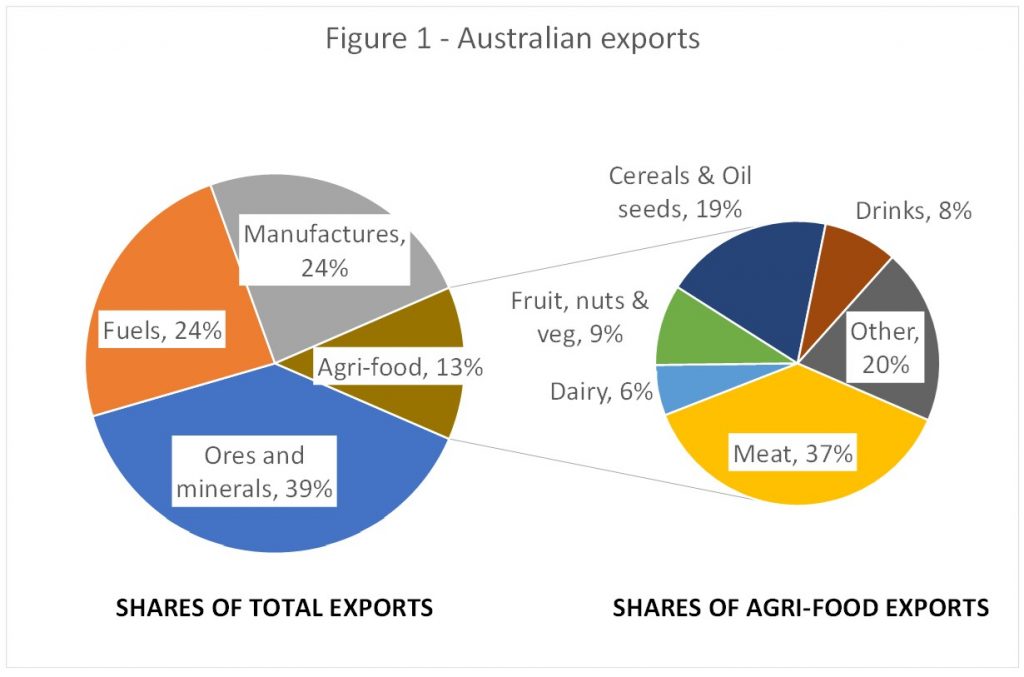 It is important to note that meat exports represent around 40% of Australian food exports (Figure 1). There is theoretically scope for a deal that would just offer tariff and quota concessions in areas like fruit (where UK production is limited), sugar, cereals and perhaps dairy. But any deal that does not offer significant liberalisation for the meat sector is going to be of limited value to Australia.

This is also because the great bulk of Australian exports to the UK already benefit from low or zero tariffs. Only about 13% of Australia’s total goods exports are agri-food goods, with the rest being mining products, fuels, metals and manufactures which are not greatly restricted by the UK’s existing regime of tariff and non-tariff barriers. 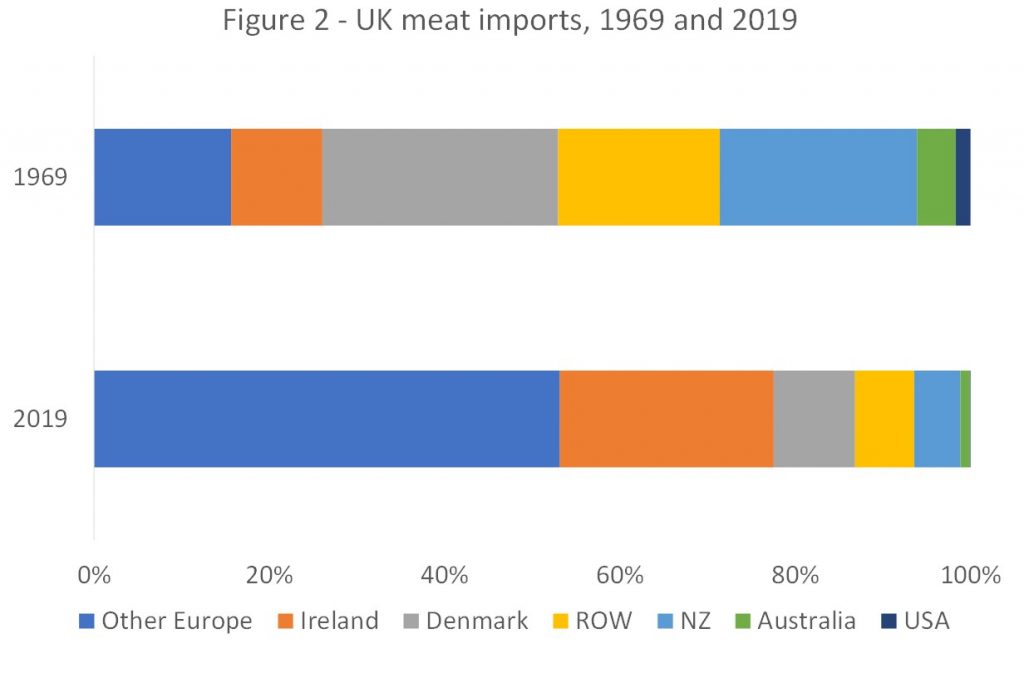 We now consider the various arguments against liberalising imports of meat products from Australia:

The risk of a damaging ‘surge’ in imports:

Australian meat products currently form a tiny part of the UK meat market. Thanks to restrictive quotas, in 2019 they represented 1% of UK meat imports and perhaps 0.3% of UK meat consumption (Figure 2). There is no doubt that liberalisation would increase this share, given the extent of the restrictions that currently exist. But the total level of UK imports of meat from Australia would be likely to remain modest for several reasons:

Overall, while there is certainly plenty of room for meat imports from Australia to increase, the risk of a damaging ‘surge’ looks small – even a tripling of imports would still leave Australia with a tiny market share. Crucially, it is also likely that to the extent Australian meat imports did rise after liberalisation, the biggest competitive pressures from this would come to bear not on UK farmers but on other countries that export meat to the UK. Domestic products enjoy a ‘home bias’ that imports do not, so that the extent of substitution between import sources is often larger than between domestic supply and imports. Particularly at risk from liberalisation of UK meat imports would be the large share of meat imports to the UK that currently come from Ireland (25% of the total). This would also be the case because Irish beef tends to be used in food processing because of its price advantage – making it vulnerable to keenly priced alternatives. 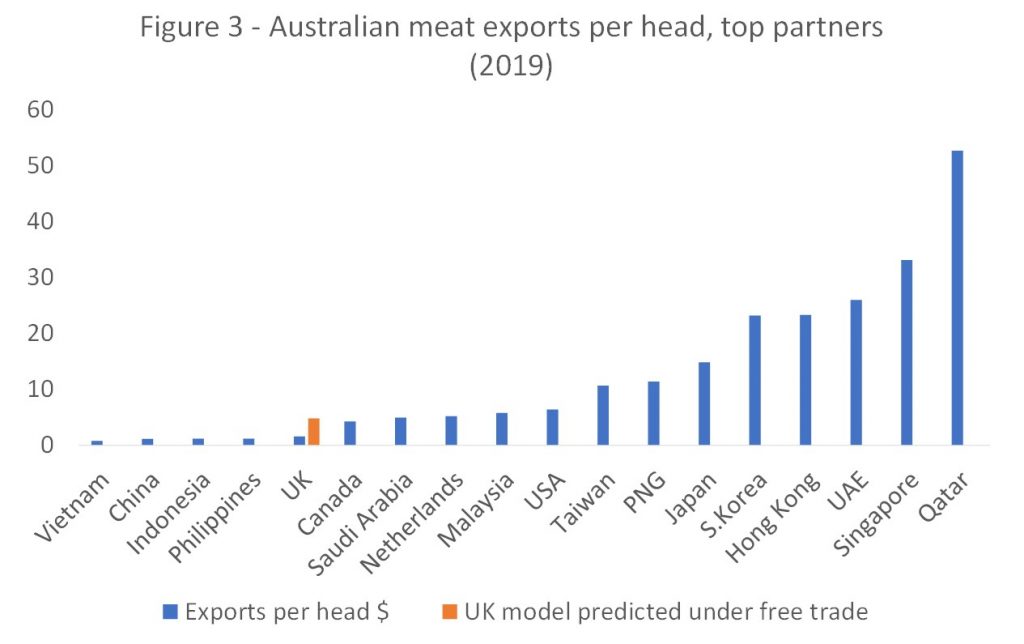 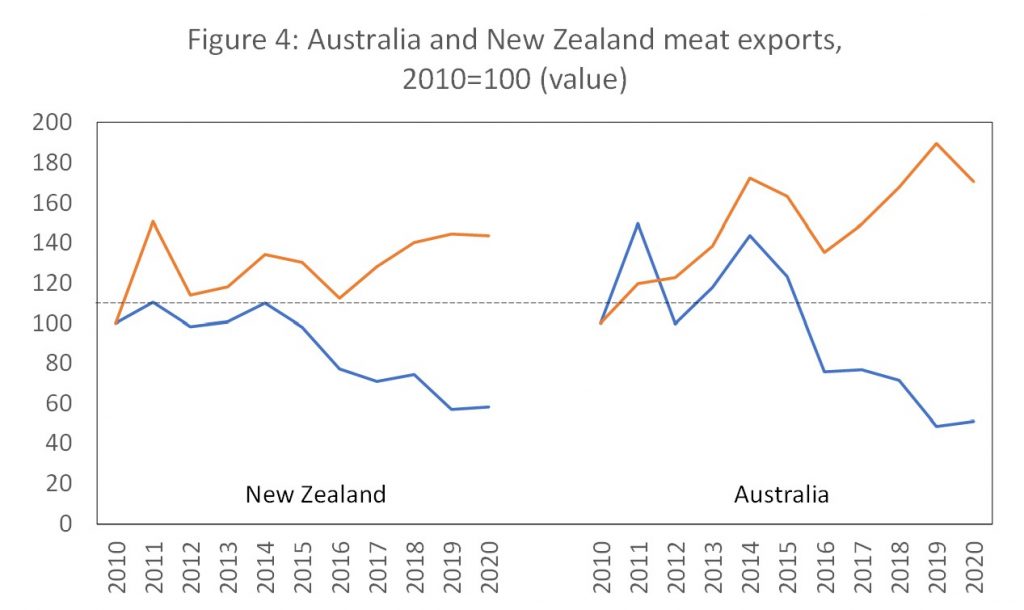 The impact on animal welfare standards:

Arguments that a trade deal with Australia would undermine UK animal welfare standards are flawed on several grounds:

The impact on UK hill farmers:

A key point with reference to this is that UK and Australian seasons are inverted, so that supplies of lamb – a key hill farm product – are most abundant from Australia (and NZ) when they are least abundant in the UK. This is one reason UK sheep farmers have managed well over the last fifty years even with NZ having a relatively generous zero-tariff quota for exporting lamb to the UK. As noted earlier, this quota has not actually been filled in recent years.

More generally, the value of output from hill farms is small as a share of the broader UK farming sector and the numbers employed are also small. It would not be expensive to increase payments to hill farmers for environmental goods produced (perhaps the key reason for support for this sector) to offset any increased competitive pressures (e.g. in sectors like beef). Indeed, many of these farms already derive a large fraction of their income from subsidies (which are likely to continue). If their meat output falls the main adjustment cost would fall on their suppliers (including foreign firms).

There is no requirement that agricultural liberalisation offered in one bilateral FTA need be extended to other countries in other FTAs. The argument here appears to be that generous treatment for Australia (and NZ) would set a ‘precedent’. But there is no legal precent set and the same argument might have been deployed to oppose the trade deal with the EU – the ‘precedent’ argument therefore is bogus.

Importing more agricultural produce from Australia would potentially increase the carbon content of the UK economy but the impact would be minimal (and partly offset by lower imports and freight movements from elsewhere). Of around 275 million tonnes of bulk freight imported into the UK in 2019, agricultural products totalled 10.8 million tonnes (4% of the total). Of this, Australian goods would have been around 1%, so 0.04% of UK bulk freight.

In discussing competitive pressures potentially being faced by the UK farming sector it is also important to note that the UK sector is shortly to receive a significant boost to its competitiveness versus EU producers. The UK is due to phase in full SPS and customs controls on EU food imports from October this year. Based on the experiences of UK meat exporters to the EU since the start of this year, this may add 6-10% to the costs of importing EU food products. Again, based on the UK experience, a decline of perhaps 10-20% in agricultural imports from the EU could result from this.

The overwhelming beneficiaries from this are likely to be UK farmers, although some third-country importers may also gain. UK farmers are going to get a cost advantage of up to 6-10% against their main competitors – from whom £29bn was imported last year (including £5bn of meat products). This massively outweighs their possible loss of competitiveness against Australian farmers, from whom just £100mn was imported last year (excluding beverages). UK farmers would remain hugely advantaged overall even if Australian farm imports to the UK tripled or quadrupled.

The economics of the Australian trade deal

The purpose of a trade deal with Australia and other third countries is twofold – to expand markets for UK goods and to provide UK consumers and businesses with new options for buying cheaper and often better goods. The second of these purposes is frequently forgotten. Improving the range and value of imports is a prize, not a danger. This was once the guiding light of UK trade policy and for good reason – it is the welfare-maximising policy and means a more competitive economy. This is especially the case for trade in agricultural products, where the UK has been reliant on imports for 30-50% of supplies since the early 19th century.

On top of this, a deal with Australia is a crucial stepping stone to the UK’s accession to the trans-Pacific CPTPP trade area – likely to be one of the major poles of world trade in the coming decades. There are potential domestic adjustment costs from any change in trade relationships, but these look modest and can be managed with for example lengthy transition periods.

Strategic and political reasons for the Australian trade deal

Along with the economic reasons for liberalising trade with Australia, there are also strong political arguments for it:

Attempts to prevent this deal being done look largely politically motivated. The various arguments about damage to farming, welfare standards or Scottish and Welsh hill farmers are weak, reliant on emotive and misleading arguments, and disguise other motives. These include basic protectionist instincts, producer interests (especially of Irish farmers) and a desire to keep the UK locked into existing patterns of trade with the EU and into EU regulations as part of a strategy to promote a long-term re-integration of the UK and EU.