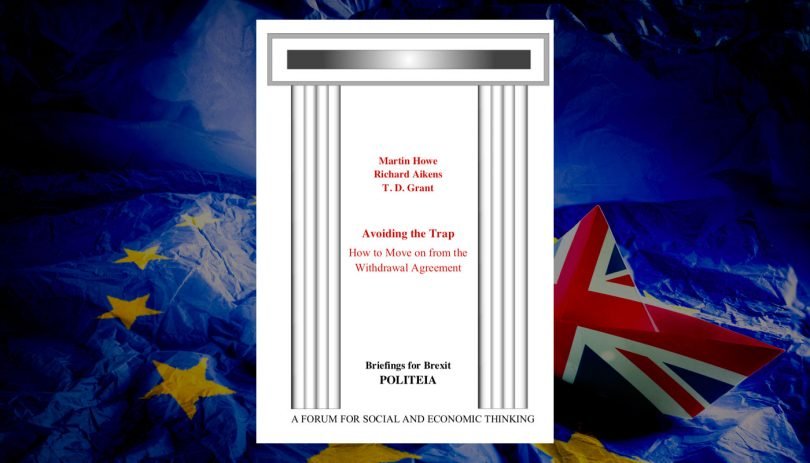 Last Monday, Briefings for Brexit and Politeia hosted a discussion of an analysis of the traps contained in the Withdrawal Agreement and the Political Declaration negotiated by Theresa May’s government, and laying out the way towards an equitable free trade agreement. Below is an executive summary of the analysis.

Below is the summary, The full report can be downloaded here.

1. As Mrs May departs, the Conservative Party is selecting a new leader who will become Prime Minister.  That person’s principal task will be to achieve Brexit and deliver the results demanded by the 17.4m people who voted to leave the EU in 2016.

2. This task requires a new start.  It should not involve an attempt to renegotiate the Withdrawal Agreement (“WA”) which resulted from Theresa May’s disastrous negotiations with the EU. Such an attempt would be futile, since the EU has set its face against any “reopening” of the WA.  It extracted a formal commitment from Mrs May not to try to reopen it as a condition of the European Council decision to grant an extension of the Article 50 “two year negotiating period” to 31 October 2019.

3. The WA (of which the Northern Ireland backstop Protocol is “an integral part”) would become legally binding in international law if ratified by the UK and the EU Parliaments. The WA contains a series of remarkable features which are detrimental to the UK and which would make “Brexit” illusory:

(1) It would perpetuate the doctrines of “direct effect” and supremacy of EU law over UK law (including new EU laws on which the UK would have no voice or vote), under which the UK courts are required to strike down Acts of Parliament if found to be inconsistent with EU law or even vaguely drafted treaty provisions.   The doctrines apply to the provisions of the WA itself and also any long term relationship agreement with the EU that would replace it.

(2) The WA would perpetuate the jurisdiction of the ECJ either directly, or via a backdoor mechanism modelled on the EU’s agreement with Ukraine, under which the supposedly neutral arbitral tribunal set up under the WA would be bound on matters of EU law by decisions of the ECJ.  Meanwhile the ECJ itself would have become an entirely foreign court with no post-Brexit British judge.

(3) The WA has uniquely stringent mechanisms for breaches by the UK, which would make the UK subject to financial penalties or even to discriminatory trade sanctions.  Any attempted recourse by the UK to WTO disputes procedures would be prohibited.

(4) The WA requires the UK to use “best endeavours in good faith” to negotiate terms for a long term future agreement in line with the principles set out in the Political Declaration (PD). The absence of an exit clause from the backstop Protocol would trap the future PM into having to negotiate against the genuine and formidable threat of the UK falling into the backstop if it did not agree to the EU’s terms. The scope for negotiation on any future long term deal is severely reduced by the concessions that have been made by the UK in the terms of the PD.

(5) The WA has no exit clause from the backstop Protocol except with the agreement of the EU, a fact unique amongst international treaties.

(6) Even in the wholly unlikely event that the EU were to agree to remove the whole backstop Protocol from the WA, the rest of the WA would still contains serious constraints on the UK and little or nothing of value. For example: (a) Its “long tail” jurisdiction would lead to UK companies being subjected to State aid or competition proceedings for many years after the UK had left the EU and after the transition period; (b) It contains an obscure clause on “geographical indications” which would severely disrupt future trade negotiations with other countries.

4. If the WA were to come into force, even if the UK would be nominally leaving the EU it would still be subject to all EU laws (including new ones), the jurisdiction of the ECJ, the decisions of EU institutions such as the Commission and EU Parliament and the UK would not be entitled to submit “proposals, initiatives or requests for information to the (EU) institutions”: WA Art 128(5)(b).

5. Because Article 184 of the WA requires the UK (and EU) to use best endeavours to negotiate a long term agreement which conforms to the principles set out in the Political Declaration (PD), the UK cannot attempt to negotiate for any future agreement that departs from those principles.  A failure to agree a long term relationship in accordance with those principles will mean that the UK is locked into the backstop Protocol terms with no way out and no legal means of complaint.  This constraint does not appear to have been appreciated by either Mrs May, her advisors or any of the current Conservative party leadership candidates.

6. There is no requirement that a Withdrawal Agreement has to be concluded in order for a member state to withdraw from the EU under Article 50 and given the position we are in, the current attempt to conclude a withdrawal agreement should be stopped.  The EU will not agree any changes and the current version will not be agreed by the UK Parliament.

6. Instead, the future PM should concentrate on addressing the longer term relationship between the UK and the EU.

7. A “no deal” exit from the EU means no withdrawal agreement under Article 50; it does not mean leaving the EU with no deals of any kind unless the EU refused to enter negotiations, despite the UK’s willingness to do so.

8. In the absence of a trade agreement between the UK and the EU, WTO rules require that the EU must charge its Common External Tariff (CET) on goods imported from the UK and the UK must charge its standard external tariffs (those charged on imports from the rest of the world) on goods imported from the EU.  Contrary to common belief, the UK is not obliged to continue to charge tariffs at EU levels – it will be free to reduce them or remove them on sectors of goods where they are not warranted.  The UK government envisaged doing so pre 29 March 2019.

9. A Civitas study demonstrates that the total value of tariffs charged on UK goods imported into the EU, and subject to the CET would be approximately 4.5% on average.  This does not amount to a swingeing increase in the price of UK exported goods to the EU.  It is less than half the net contributions that the UK makes to the EU budget each year.

10. The future PM should propose the continuation of zero tariffs on goods between the UK and the EU.  The mechanism would be a simple temporary Free Trade Agreement, to apply until a fuller long term FTA can be negotiated and ratified.  A draft (complying with GATT rules) has already been prepared by Dr Lorand Bartels of Cambridge University.

11. Such a bridging arrangement would be preferable to the elaborate and highly constricting “transition period” envisaged by the WA, under which the UK would be subject to all EU laws (including new laws on which it would have no vote) and could not implement any trade agreements with third countries. By contrast, this bridging arrangement would be compatible with the immediate negotiation and implementation of trade agreements with third countries such as the USA.

12. As for the suggestion that there would have to be a closed land border in Ireland to deal with tariffs, it must be recalled that both the Channel ports and the Irish land border are already fiscal borders for the imposition of VAT and Excise Duties on goods imported into the UK.  VAT is currently satisfactorily collected by businesses filing electronic returns with periodic inspection to ensure compliance. The same process can be applied to any collection of trade tariffs (if there are any).

12. As for regulatory barriers post-Brexit, under the terms of the 2018 Withdrawal Act, the UK’s post Brexit regulations relating to goods will be the same as the EU’s, unless and until divergence occurs in particular areas. Moreover, UK law (the 2018 Withdrawal Act) lays down the default rule of continuing to recognise EU goods as conforming to British standards.  There will be no legal barrier against the continued importation into the UK of goods made and certified under EU standards and rules.  Stories of “shortages” of food and medicine are wrong.

13. Arrangements on regulatory recognition are normal between trading countries whether or not they are in any existing special trade agreement.  They are mandated by the World Trade Organisation’s (WTO’s) TBT and SPS agreements.  Thus the EU will be under both legal and practical pressure to enter into arrangements to continue to recognise UK goods as conforming with EU standards.

13. As for services, the UK is a net services exporter.  There are no current plans to change the rules and standards of UK based services providers, so that the EU has no rational basis on which to refuse recognition.  In the financial sector, EU industries’ access to the City is important, if not vital.  Under the Withdrawal Act 2018 the default position is that EU-based service providers would continue to be recognised and able to provide services to UK customers unless and until UK rules are positively changed.

14. A zero tariff FTA is hugely beneficial to the EU having regard to the size of the UK’s deficit in goods trade and the way in which EU goods exports to the UK are concentrated in high tariff sectors. It would be entirely reasonable for the UK to ask in return for interim access for goods and services into the EU market for as long as relevant rules remain aligned.

“What we have proposed is a better way forward than the WA from all angles. Nobody can guarantee how the EU will choose to react, but if they have any sense and if these proposals are pushed by a determined UK Prime Minister then they present the best chance of an optimal exit from the EU.”

Avoiding the Trap – How to Move on from the Withdrawal Agreement, by Martin Howe, Richard Aikens and T. D. Grant, is published by Briefings for Brexit and Politeia, 14a Eccleston Street, SW1 W9LT, priced £8-00. Hard copies are available to journalists on request from press@politeia.co.uk.

Martin Howe QC, 8 New Square; Chairman, Lawyers for Britain; Author, The Cost of Transition: Few Gains, Much Pain? (2017) and How to leave the EU: Legal and Trade Priorities for the New Britain (2016).

Above is the summary, The full report can be downloaded here.