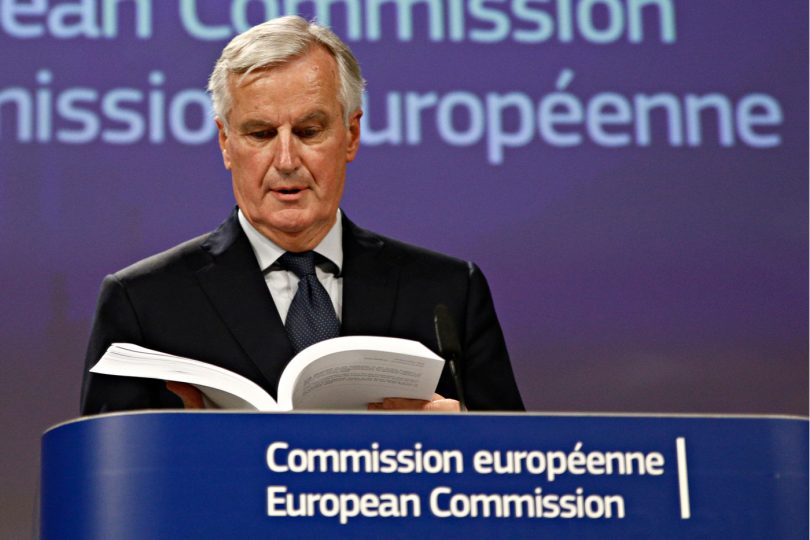 Last week, Michel Barnier stated that while the UK would regain full sovereignty over its waters post-Brexit, the fish in those waters were ‘another story’. Unfortunately for Barnier, international law proves him completely wrong on this point.

Last week, the EU’s chief negotiator Michel Barnier gave an online talk on the state of the Future Relationship negotiations, organised by Ireland’s Institute of International and European Affairs (IIEA). Needless to say, British and European journalists tuned in, listening carefully for their next headline story.

They weren’t disappointed. Media outlets were soon reporting Barnier as having made an extraordinary statement on the UK’s right to control fishing in its waters. Tony Connelly, EU correspondent for RTE (Ireland’s equivalent of the BBC) quoted him as follows:

‘Barnier: We are ready to move on our initial position [on fisheries] if the UK moves. The UK will regain full sovereignty over its waters, no doubt, but regaining control over the fish in those waters is another issue.’

Could Barnier really have made such an astonishing remark? And if so, what did he mean exactly?

It turns out that Connelly’s slightly paraphrased quotation was spot on. To put to bed any charges that he may have been misquoted or misrepresented by the media, here are Barnier’s words verbatim and in the full context that he said them:

‘Becoming an independent coastal code [sic – presumably ‘state’], obviously the UK will recover full sovereignty on their waters – no doubt and no question on this point. But it is another thing, another story, speaking about the fish which are inside [sic] the waters.

‘Looking [at] and respecting the international regulations and also what must be done on this issue, we think that we have to speak about the quota share to find a sustainable, long-term and balanced agreement with the UK.’ [1]

The position in international law

As a matter of international law, Barnier’s assertion is simply false. What we colloquially refer to as ‘fishing waters’ is referred to in international law as a country’s Exclusive Economic Zone (EEZ). EEZs are defined by the United Nations Convention on the Law of the Sea (UNCLOS), and reach to 200 nautical miles from a nation’s coastline, or the ‘median line’ if there is less than 400 miles between two countries’ coastlines (as is the case between the UK and the Republic of Ireland, for example).

UNCLOS is crystal clear that national sovereignty (it explicitly uses the term ‘sovereign rights’) applies not only to the waters, but to ‘natural resources, whether living or non-living’ within them:

‘1. In the exclusive economic zone, the coastal State has:

‘(a) sovereign rights for the purpose of exploring and exploiting, conserving and managing the natural resources, whether living or non-living, of the waters superjacent to the seabed and of the seabed and its subsoil, and with regard to other activities for the economic exploitation and exploration of the zone, such as the production of energy from the water, currents and winds;’ [Article 56]

There can therefore be no doubt that Barnier’s remark about the fish in UK waters being ‘another story’ is completely and unambiguously false.

What did Barnier mean?

Could this be a genuine error on Barnier’s part? Doubtful. Let us recall that Barnier served as French Minister of Agriculture and Fisheries for two years (2007–9). It would seem odd for any former fisheries minister not to be familiar with the basic definition of an EEZ as laid out in UNCLOS, let alone one renowned for being on top of the minutiae of his brief like Barnier.

Another possibility, given his remark immediately afterwards about ‘looking [at] and respecting the international regulations’, is that Barnier was making a cryptic reference to other provisions of UNCLOS. Let us examine the possibilities.

Firstly, Article 62(2) of UNCLOS states that if a coastal state has spare resource and does not have the fleet capacity to harvest it all, then their neighbours can use that resource. The British fishing fleet has been seriously diminished by decades of being subject to the EU’s Common Fisheries Policy (CFP). Whether the UK has the capacity to harvest all of the resource in its own EEZ is a matter for debate.

However, that does not mean that EU fishermen would be entitled to sail in and help themselves. Article 62(2) is clear that other countries’ ‘access to the surplus of the allowable catch’ should be ‘through agreements or other arrangements.’ It would therefore be incumbent on the EU to seek an agreement with the UK to harvest any surplus fish stocks that British fishermen were not capable of harvesting themselves.

Moreover, Article 61 of UNCLOS clearly states that it is for the UK to set the ‘total allowable catch’ (TAC) of fish within the UK EEZ. The UK’s TAC cannot be arbitrary: states are obliged to take into account a number of factors, notably balancing ‘the economic needs of coastal fishing communities’, against their responsibility to ensure that fish stocks are ‘not endangered by overexploitation’. But there is certainly scope for the UK to lower its TAC to allow for the replenishment of its fish stocks after decades of overfishing under the CFP while its fleet is built up again.

Finally, Article 63.1 states that a coastal state shall cooperate with neighbours to agree TAC shares of stocks in fisheries areas that fall within both parties’ EEZs. But while the UK is indeed obliged to cooperate with the EU ‘to agree upon measures necessary to coordinate and ensure the conservation and development of such stocks’, it is far from obliged to agree to any old EU demand on TAC shares, least of all demands that entail the antithesis of conservation. Indeed, such cooperation need not even be directly with the EU: it can be ‘through appropriate sub-regional or regional organizations’, which would be the natural step for a newly-sovereign UK.

In short, there is no obvious answer as to what exactly Barnier meant when he said that Britain regaining sovereignty over its fish was ‘another story’. Given that it is hard to imagine this former fisheries minister not being well-versed in the intricacies of international law vis-à-vis fishing rights, one can only surmise it was a theatrical but throwaway comment made in frustration at said international law not being on his side. Fishing, remember, is a totally different story to trade. While trade between the UK and EU will continue on WTO terms in the event of no-deal, fishing by EU fleets in the UK’s EEZ must stop dead on 1 January 2021 until such time as a deal is reached. Barnier’s ‘another story’ is nothing more than a fairy tale, and a fishy one at that.

[1] The full video broadcast of the event can be viewed online here. Barnier’s fisheries remarks begin at around 51:30.