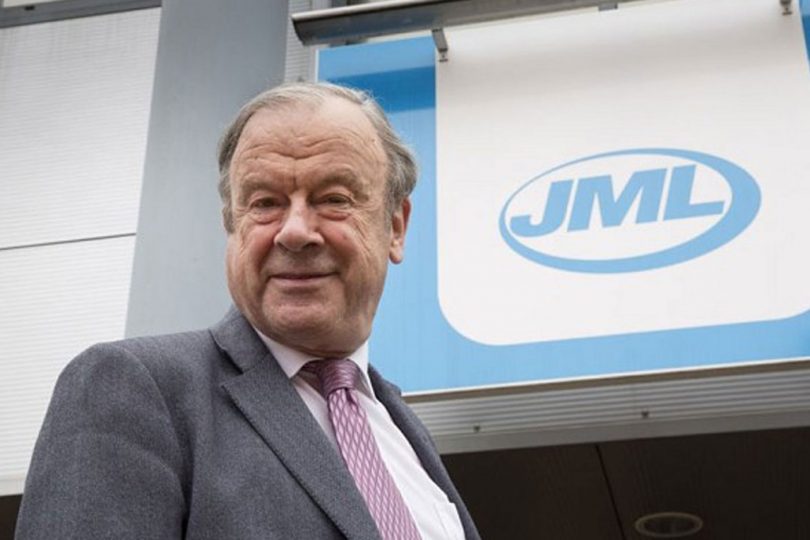 One UK businessman who has pinned his colours firmly to the mast of Brexit is John Mills, Chairman of John Mills Ltd, (JML) which sells high volume consumer products. Mills is also a founder of Labour Leave.

One UK businessman who has pinned his colours firmly to the mast of Brexit is John Mills, Chairman of John Mills Ltd, (JML) which sells high volume consumer products. Mills is also a founder of Labour Leave.

JML sends 2,000 containers a year to around 85 countries in and outside of the EU 28 and finds no difficulty in trading on WTO (World Trade Organisation) rules.

“About 80 per cent of these are on WTO terms and we have no problems”, Mills explains in this 20 minute audio podcast for the B4B website.

Mills begins by explaining that he thinks there is a 50/50 chance of Theresa May, the Prime Minister, and Dominic Raab, the Brexit Minister, securing a deal on behalf of the UK with the EU but that it will be hard to get agreement to it in Parliament, as both hard-line Brexiteers and some Labour MPs may not be willing to vote for it.

“It is not a good deal (Chequers). There may not be a majority for all the bad elements that are now proposed and as a result of that it may not go through. It will probably split the Labour vote as the Party won’t want to shore up the government’s bad deal,” he said.

He also said that in his view there is no reason why the UK can’t go on trading with the EU27 “more or less whatever happens in terms of the Brexit outcome”.

Mills said that he did not think it would be “more costly” for the UK to trade outside of the EU and that all that was needed additionally for businesses like his to do that was “a certificate of origin” which was really a formality. He said that from first-hand experience he knew that the cost of getting these was only around 1 per cent of the container load costs.

In an article he has written previously for B4B, with one of its co-founders Dr Graham Gudgin, Mills had challenged the HMRC (Her Majesty’s Revenue and Customs) estimates that trading outside of the EU customs union would cost UK firms as much as £20 billion a year.  In fact they estimated the figure would be nearer £2 billion.

He continued: “The £20 billion figure is absurd. There is a pattern of scare mongering to make it sound a much more difficult situation than it really is.”

Responding to an opinion poll earlier this week conducted by Channel 4 news that said most voters now wanted to remain in the EU, Mills said the poll reflected similar figures to those that pertained before the Brexit Vote in June 2016 but that he believed if another referendum was held the result might be much the same as it was then with a narrow majority for Leave.

He went on to explain that he thought the EU had not been good at negotiating trade deals or responding to a globalised World and that even a country the size of Peru had been better at securing global trade deals. “Size doesn’t really give you an advantage”, he said.

Agreements such as the CPTPP (Comprehensive and Progressive Agreement for Trans-Pacific Partnerships) that the US may soon join up to can help to facilitate trading arrangements. He said that globalisation had resulted in a “substantial number of losers” both here and in the States but that more generally globalisation does help to “raise living standards”. “Trade liberalisation is the right step forward”, he said.

He strongly believes that the issue of the NI backstop has been “blown up out of all proportion”. He said that his company trades with Southern Ireland and that he “doesn’t think” there would be a problem organising some kind of trading checks without a hard border.  “You could see your way through it”, he said.

Overall Mills thinks UK firms outside of the EU can trade successfully including the car manufacturers’ who rely on just in time supply chains as some like Honda are already trading on WTO terms. ”This shouldn’t be an obstacle at all”, he said.

He also said that when there had been a strike in France in the recent past there had been 19 days of no movement of goods at Calais but medicines and other essential goods did not run out.  “It is very easy to get all this exaggerated,” he said.

Manufacturing industries, he thought, would benefit from a drop in the exchange rates if there was a no-deal, as they did immediately after the Brexit vote in 2016. He went on to say that the “shock” of Brexit would help to stimulate enterprise in the economy and enable the government to take action to deal with regional imbalances. “It could help people to think in more constructive ways”, he said.

He pointed out that growth in the UK economy was 60 per cent below the World average and that most people had not had a wage increase in ten years. “Brexit could produce better outcomes for Labour voters”, he said.

Mills concluded by saying that he supported a Canada style Brexit agreement and that this should have been May’s preferred option from the beginning of the negotiations. “We may not even now have time to get a Canada style agreement by next March,” he said.