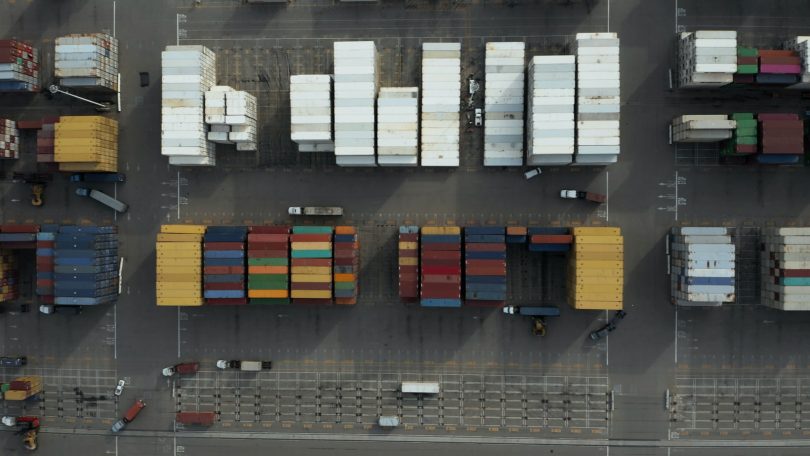 Narratives pushed by Remainers and parts of the media suggest that UK exports have slumped over the last year due to increased border frictions affecting trade with the EU, and that the UK’s economic performance will badly hit as a result. But a careful look at the data does not support these claims. The lurid claims of trade collapsing due to an avalanche of border bureaucracy are based on misreading or deliberately misrepresenting the figures.

A look at the UK media and statements of some politicians and lobby groups over recent months might yield, to the casual observer, the following picture about how UK trade has performed in the year or so since the UK left the EU customs union and single market –

All these contentions are, however, either entirely untrue, half-truths or extremely contentious. Let’s consider each of them in turn: 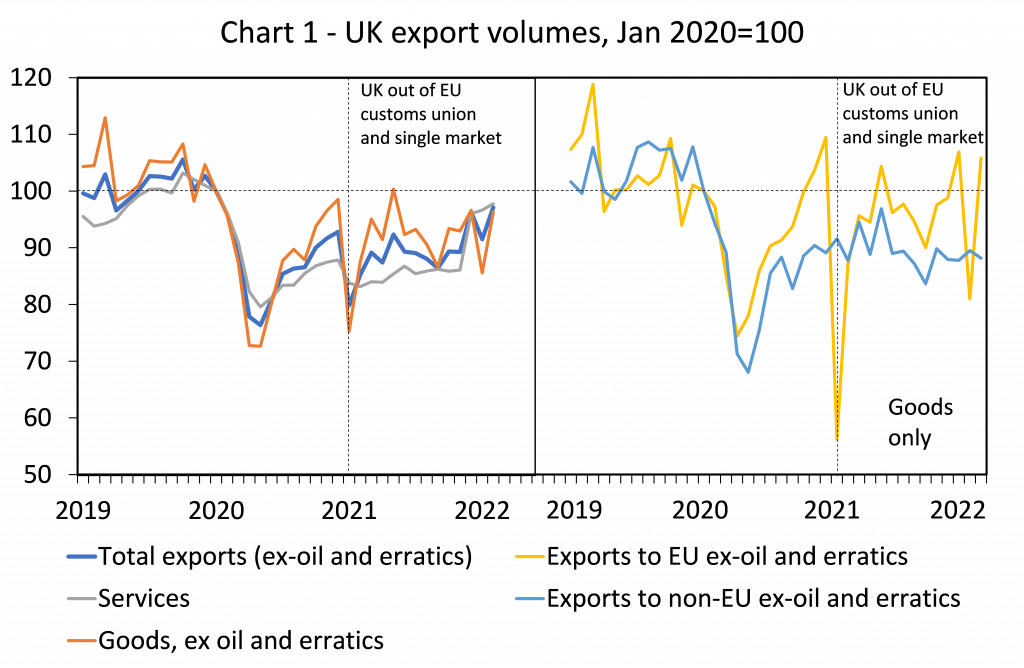 Overall UK export performance: The UK left the EU single market and customs union at the start of 2021. Just over a year later, in February 2022, UK exports of goods and services (excluding oil and erratic items) were about 2% below the level seen in January 2020, just before the coronavirus crisis. This is not the massive decline that the Treasury and other observers predicted before (and after) the UK Brexit referendum.

Moreover, any weakness of goods and services exports in the last year or so has not been primarily due to exports of goods to the EU. In fact, UK goods exports to the EU excluding oil and erratic items were about 6% higher in February 2022 than in January 2020. There was a temporary slump in recorded exports in January 2022, gleefully blamed by Remainers on new border processes brought in by the UK (illogically, as these related largely to imports from the EU). But this drop was mostly due to changes in the way the data was collected which caused a break in the time series, as the UK statistical authorities noted at the time, and the decline was reversed the following month.

Instead, the main drags on UK exports in 2021 and early 2022 have been exports of services and exports to non-EU countries. The services export decline was mostly due to the dramatic impact on world services trade of the coronavirus pandemic and is now reversing rapidly as this abates – UK services exports in February 2022 were back to 98% of the level of early 2020, having been 15% or so below it for most of the last year.

Meanwhile, UK goods exports to non-EU countries are about 12% down on their early 2020 levels (see Chart 1). The causes of this are not clear although weakness in road vehicle and machinery sales seems to be largely responsible. But whatever the underlying cause, it cannot be due to Brexit as trading relationships with non-EU countries have not been significantly affected by Brexit. 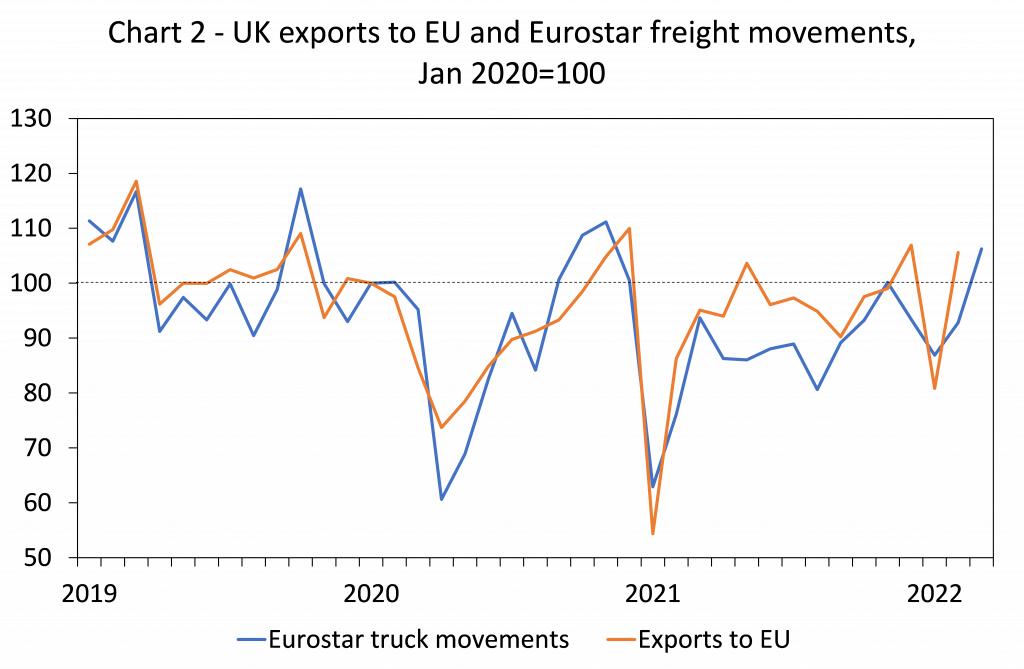 Available leading indicators suggest UK exports are likely to improve further in March. Eurostar freight movements, which correlate well with UK exports to the EU, rose in March to a level 13% higher than a year before. The level of shipments was close to that seen in late 2020 when traders were pushing through unusually high levels of shipments ahead of the UK’s exits from the customs union and single market (Chart 2). Similarly, the March UK CBI industrial trends survey showed export order books at their strongest since March 2019.

Export performance by sector: Looking at export performance by industry shows some surprising patterns and reveals an underlying performance stronger than the headline data suggest. First, oil and erratic items have been significant drags on exports, both falling by around 40% since the start of 2020. We have generally excluded both items from our analyses of UK exports over the last year because their extreme moves are not related to Brexit but are instead statistical noise or in the case of oil due to long-run supply shifts.

Another weak area has been road vehicles, where exports in February 2022 were 35% below January 2020 levels. But this is also probably not due to Brexit, but instead due to supply chain problems in the auto industry resulting from the coronavirus pandemic – principally a serious shortage of computer chips. If we exclude road vehicles from exports to the EU as well as oil and erratics, UK exports in February were 12% above January 2020 levels (Chart 3) with the machinery sector doing especially well (exports up 22%).

A final weak area worth noting is clothing exports to the EU, which are down by half since early 2020. This looks like a genuine case of loss caused by Brexit. The reason is that many UK clothes ‘exporters’ pre-Brexit were actually effectively re-exporting goods made in Asia – these now face tariffs at the EU border making this business model unviable. 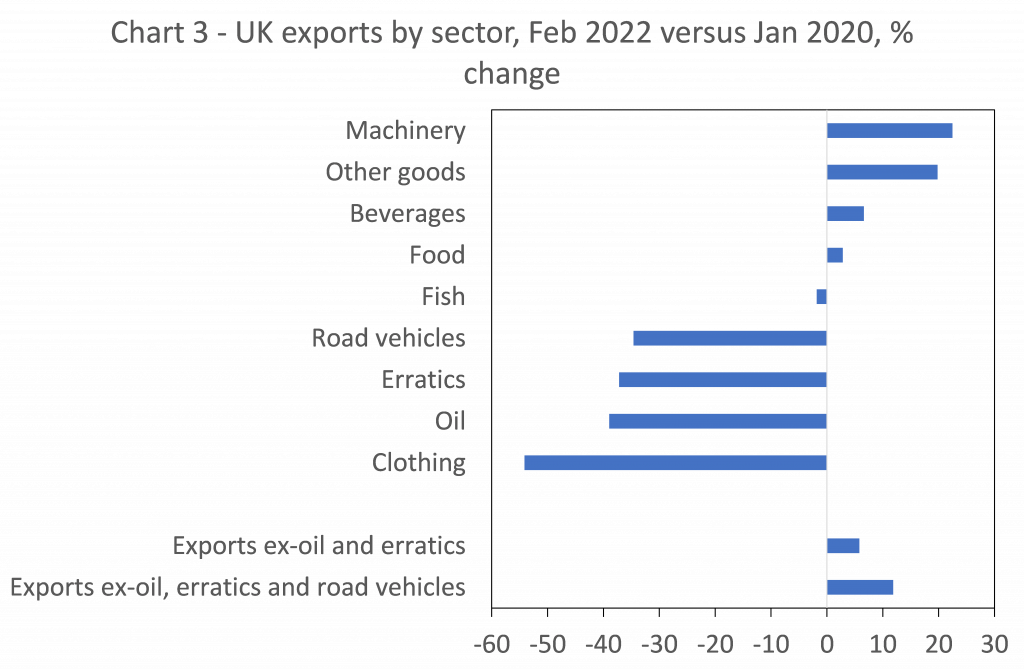 What about the supposedly hard-hit food and fisheries sectors? Contrary to media hype, exports to the EU from these sectors have proved remarkably resilient (as we previous noted). Fishing exports are little changed from early 2020, other food exports are slightly up, and beverages exports in February were 7% higher than at the start of 2020. Given that these sectors faced arguably the largest new barriers of any sectors post-Brexit, this performance is very creditable. 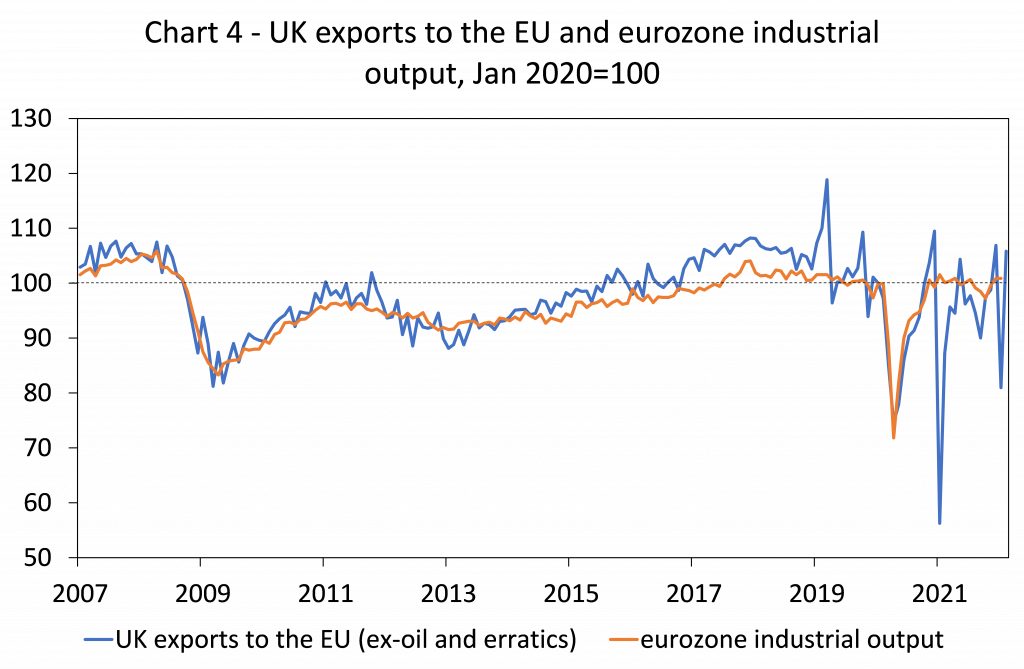 Are UK exports underperforming? The relatively robust performance of UK exports to the EU has prompted some Remainer observers to switch tack and claim instead that UK exports are underperforming some hypothetical level rather than collapsing. This is already a climbdown from their previous position but is nevertheless also very contentious. We have written elsewhere about the questionable statistical methods used to produce these analyses but a simple comparison of UK exports to the EU and EU industrial output since 2007 shows clearly how weak this argument is.

First, there is no clear upward trend in UK exports to the EU. UK exports to the EU at the end of 2019 were actually slightly lower than in early 2007 – so UK exports in February 2022 are in line with the basically flat trend of the last fifteen years. Second, eurozone industrial output has also shown a flat long-term trend – in January 2022, it was actually slightly lower than at the start of 2007 (Chart 4). The two things are obviously closely related – it is going to be hard to consistently grow exports in a market that is broadly stagnant (note many UK goods exports to the EU are inputs into EU industry).

If we do want to play the relative performance game, a comparison of UK export performance in the French market (the UK’s closest neighbour) with that of Germany is instructive. In February, the index levels of UK and German sales into France were almost identical relative to the levels of early 2019 (Chart 5). There is no sign of underperformance by UK exports here relative to those of the EU’s biggest exporter (and presumably German exports to France have not been affected by Brexit!). 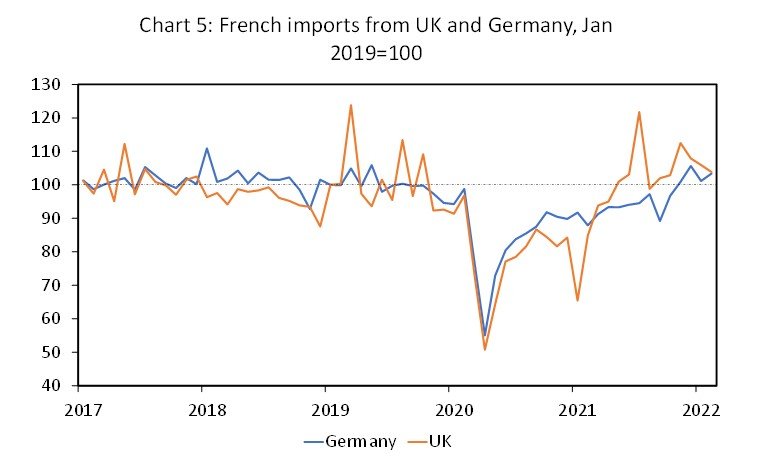 Are UK exporters giving up selling to the EU? Another recent claim is that post-Brexit border bureaucracy has led to lots of UK firms – perhaps a third of previous exporters – giving up selling to the EU. This claim is based on misreading of the data. Earlier this month, the UK authorities (ONS) released a new estimate of the population of importers and exporters based on customs declarations. The ONS made clear in its press release that this data relates to 2021 only and that any comparisons with previous years should be made with caution (among other things, the new series excludes Northern Ireland) but this has largely been ignored. There has been a major structural break in the series but as so often what is probably largely statistical noise is being misinterpreted based on strong priors. 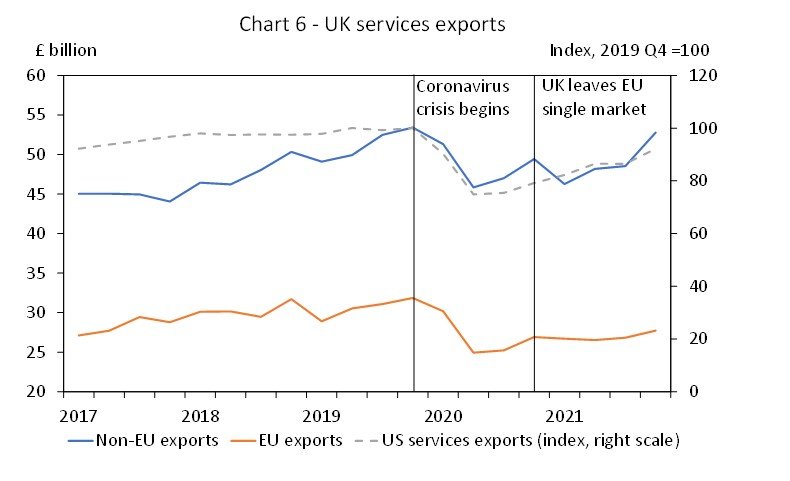 The macroeconomic effects of trade performance: Public discourse continues to feature claims that weaker UK trade means a large long-term hit to GDP and living standards, with the claim repeated so often that it is frequently assumed to be a fact. But it is nothing of the kind. There are two main objections to this claims.

First, as the UK National Institute of Economic and Social Research (NIESR) have pointed out (in what constitutes a significant recantation), not only have the poor trade numbers predicted before Brexit failed to materialise, but the net trade position with the EU has improved substantially since 2016, by around 2% of GDP (Chart 7). It is this net trade position, not gross flows, that affects economic growth. NIESR speculate that this trade balance improvement might be due to sterling depreciation but a bigger depreciation in 2008-2009 did not yield the same sort of result. It is more likely, in our view, that the price elasticity of demand for UK exports to the EU has proved relatively low (in line with some academic findings) while UK consumers have been quicker to switch away from EU goods.

Second, the repeated claim that lower trade intensity leads to a long-term decline in productivity is extremely contentious. Various UK bodies continue to uncritically repeat this claim, including the Office for Budget Responsibility (OBR) which recently claimed UK trade performance post-Brexit could cut productivity by 4%. We have repeatedly argued that such enormous effects are not supported either by actual UK productivity performance over the long term or by the academic literature. The latter both casts considerable doubt on any statistical link and frequently suggests that the direction of causation is from productivity to trade, not the other way around. It is at best sloppy and at worst tendentious for supposedly independent bodies to continue to present this unsupportable claim of a 4% fall in UK productivity from Brexit. 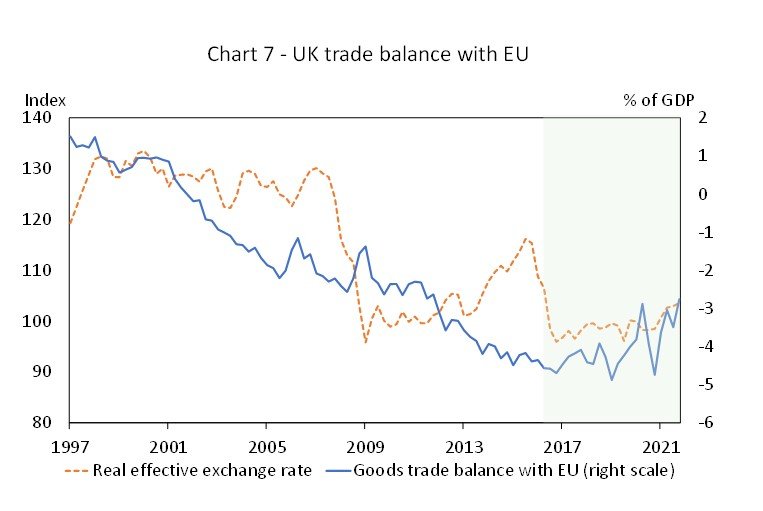 UK trade performance since the start of 2021 has been tricky to interpret given various statistical distortions and due to the impact of the coronavirus pandemic. The latter is unlikely to have helped the UK export sector due to the disruption within firms and the demand shifts it created – away from services, in which the UK specialises, towards goods, and within goods towards sectors like consumer electronics in which the UK has a limited presence.

Despite these setbacks, however, plus the challenges created by new border processes coming in at the start of 2021, the underlying performance of UK exports to the EU has been remarkably resilient. The widely predicted collapse in sales has failed to materialise and sensitive sectors like food and fishing have proved surprisingly robust. While there have undoubtedly been some losers from Brexit among UK firms, claims of Brexit causing a slump in aggregate UK export performance are generally not supported by the evidence. Most of them reflect a misreading or deliberate misrepresentation of the evidence – as do claims of a big negative impact on UK economic growth.

Harry Western is the pen-name of a senior economist working in the private.