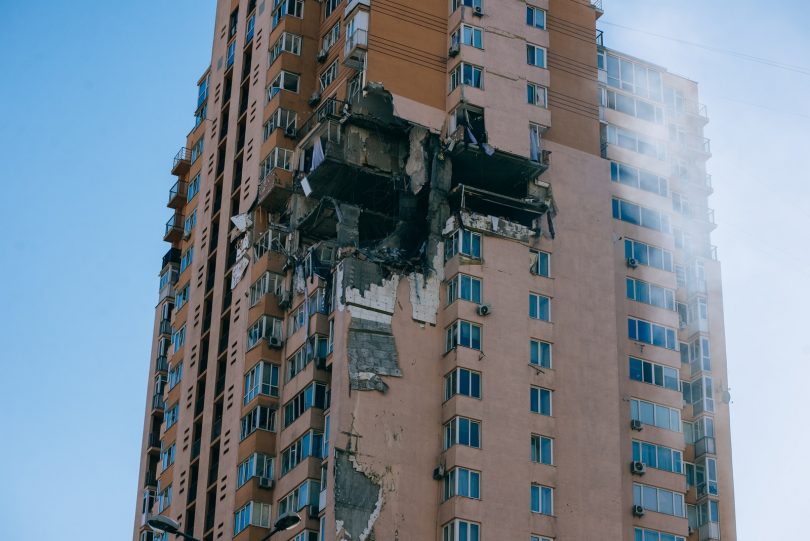 Biden says he wants Ukraine “to continue the fight” although he doesn’t say to what end, and Liz Truss says Putin must lose while warning that he might use “worse weapons” in order to win. What’s going on here?

In spite of all the media noise, this is the war no ordinary person wants to talk about. While the front pages shout, foreign correspondents emote, and some commentators call it World War Three (the very thing it’s not, not yet), family and friends keep the lid on. And they do so not because they don’t care but because they do.

Forty years ago, I organized a conference in Leicester on ‘The chances of nuclear conflict in Europe’. Cruise missiles were the provocation. Americans were to blame. Vaughan College in the city centre was packed. Discussion centred on how the British government might abandon its nuclear weapons and live in peace with its neighbours. Soon after, I went on a British Council trip to General Jaruzelski’s Poland where I was told by students and Solidarnosc alike not to trust the Russians. In a lecture at Warsaw University I made remarks in support of END (European Nuclear Disarmament). “Nie” they said. “Keep your guard up”, and one young woman raised her fists to show me how. Only the distinguished professor and party member defended the Russian presence after 1945 but no one, absolutely no one, believed in unilateralism.

It’s difficult to say what a Putin ‘loss’ or ‘win’ would look like but let’s say Russian forces get the upper hand and terrorize their way to the Polish frontier. From the Russian point of view, this means directly facing a hostile nuclear alliance – the very thing Putin has told us he does not want. And because this would necessitate the deployment of millions of troops and ordnance he has not got, it would stretch Russian lines of communication to breaking point.

On the other hand, a Putin who is boxed-in and losing is even more dangerous – a situation where something brutal could easily be turned into something (what analysts now call) ‘existential’.  And if this is true, Ukraine can’t completely win either because Zelensky winning would mean Russia losing.

Whatever Putin’s ideological impulses, and they have been pored over, they are secondary to the win/lose calculation. It might be that he is fighting in order to re-establish Holy Mother Russia’s sacred destiny, as some commentators have suggested. But if he is, destroying Kiev, founding city of Kievan Rus would be a blasphemy. It might be that he is fighting to ‘de-Nazify’ Ukraine. But if he is, it would appear that the Nazis are fleeing in push chairs. (But for the Ukrainian state’s egregious if eccentric relationship with far-right militias see Aris Roussinos, Unherd, 15 March 2022).  It might be that, as Nikita Khrushchev’s great grand-daughter Nina, a New York professor, says, Putin is irrational and delusional and doesn’t know what he is doing. But if he is, so was Kennedy in his confrontation with her great grandfather over Cuba in 1962.

Of course, Kennedy was no Putin. He was a democratically elected president of a liberal state. Nor was he a mass murderer, but, and this is the point, he was prepared to be if the situation demanded it.  Great powers don’t want hostile alliances on the border. Gorbachev didn’t want it in 1990, Putin said he didn’t want it in 2007 and we are clear he doesn’t want it now. Kennedy once explained to his generals how “goddam dangerous” it would be to have American nuclear missiles in Turkey until one of them reminded him that he had them already.

Putin’s ideological motives might involve any mixture of these impulses but in the stark light of war it seems he wants to sweep the old eastern ‘bloc’ back into a Russian orbit according to Eurasian ‘heartland’ considerations first made by the Oxford geographer Halford Mackinder over a century ago, revived and made popular in Russia by Alexander Dugin’s The Foundation of Geopolitics, published in 1997.  This means defending key exit and entry points in the Black Sea and on eastern end of the north European plain, and Russifying that which he claims is profoundly and inextricably Russian anyway – Ukraine. As so often with nationalists, actually existing nationalisms are never enough. They have to conform to the idea.

What sort of deal does the situation allow?

First, a deal where Putin gets away with smashing Ukraine in the face and, for his trouble – and it has been a lot of trouble – he gets a hard border with a neutral Ukraine and a soft border with the mainly Russian-speaking regions of the Donbas. The Donbas is being attacked as I write and it’s impossible to know how that will turn out. In the light of this war I’ve seen no authoritative account of what the peoples of these eastern regions think about Russia, or Ukraine. But neither side can seriously wish to govern inherently hostile territory and when things calm down, as they must, this question must be addressed by both camps with all the neutrality Putin says he wants from one. If ever the United Nations had a job to do, this is it.

Second, the situation indicates a deal where if Putin doesn’t completely win, or lose, neither does Zelensky, first because if Ukraine has been smashed in the face so has the Russian army, second because Ukraine has won moral respect and Russia has lost it, and third because if Ukraine chooses to be neutral or non-aligned just as Sweden, or Austria or Finland have chosen to be neutral or non-aligned, albeit for different reasons, it is not the end of the world while being in NATO or fighting on and on to the last British anti-tank weapon most certainly could be.

Diplomacy is war by other means. At the 1981 Leicester conference, one expert advised us to have “the courage of our confusions” and this applies even more so in a world where over the past forty years the core strategic principle seems to have shifted from mutually assured nuclear deterrence to mutually assured nuclear blackmail. For those analysts who want direct military confrontation with Russia, consider this. The more this war goes on, the less Ukraine there will be to defend and when it does finally stop, as it must, both sides will be obliged to sell the peace. Defeat and humiliation will not help them do so.  The first law of modern European history is that Russia does not lose on (what it considers) its own territory. Anyone who doubts that should see Bruno Maçães’s remarkable interview (New Statesman 8 April) with Putin’s former chief advisor Sergey Karaganov.

We don’t know what NATO would do if Putin did the unthinkable. Nor does Putin. Nor, I suspect, does NATO. I read recently that war strategists have come up with the doctrine of ‘escalate in order to de-escalate’. I have no idea whether Liz Truss is playing Foreign Secretary or posturing to be Prime Minister. I have no idea whether the actual Prime Minister is better or worse informed than previous prime ministers but, having come to this, the future of the planet down to a game of Russian Roulette, we can’t go on as we are. Expect massive popular reaction when the war is over. In the wake of a world economic emergency, a world climate emergency, a world pandemic emergency and a world energy emergency, it is time to halt this scabrous, dangerous little war. Time for realpolitik on all sides and a little sunshine on Kyiv.