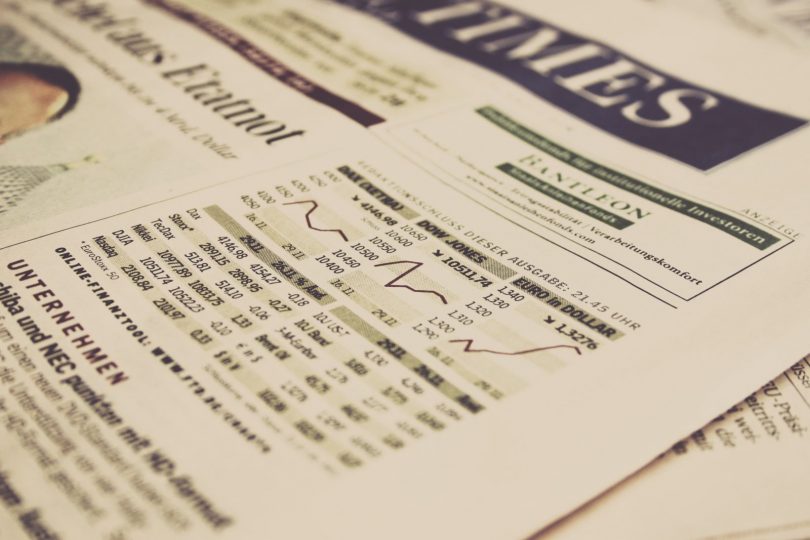 The incoming data for Europe and, especially, Italy, is grimmer than anyone could have anticipated. But the framework that guided the economic and financial analysis of my two earlier pieces remains a useful way of tracking this unfolding crisis.

On February 28, I wrote a piece with a premonition: “Italy: the crisis that could go viral.” On March 10, I did a follow-up with a more urgent message: “Italy will need a precautionary bailout—a financial firewall—as the coronavirus pushes it to the brink.” A lifetime has passed since then and the incoming data for Europe and, especially, Italy, is grimmer than anyone could have anticipated. But the framework that guided the economic and financial analysis of my two earlier pieces remains a useful way of tracking this unfolding crisis. These are its four elements:

The coronavirus struck China, the world’s central trade node, in the midst of an ongoing Chinese economic slowdown. Chinese imports and exports had sharply decelerated since the start of 2018. On top of that, the U.S.-China trade war caused world trade to contract in the final months of 2019. On that preexisting weakness, the virus inflicted a hammer blow. Chinese trade collapsed. World trade numbers, when they come in, will look ugly. 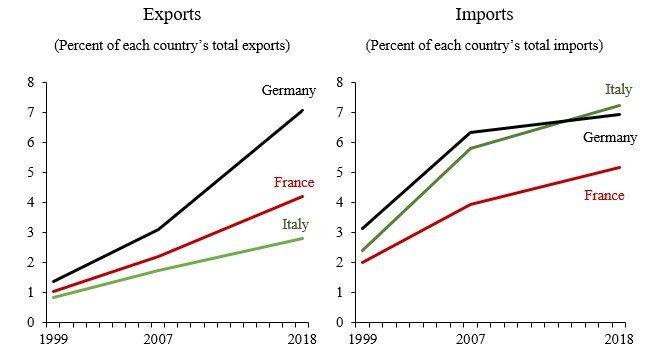 As a result, whenever the Chinese economy has slowed in recent years, so have the European economies. That link was plainly evident during the 2018-2019 slowdown.Source: IMF Data, http://data.imf.org/regular.aspx?key=61013712

By late last year, falling world trade had pulled Europe into near recession. 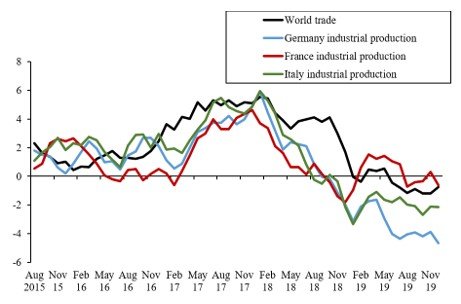 Now, with the sharp Chinese contraction, European countries are being hit twice. Their direct trade with China is shrinking and the knock-on effect of slower European growth is causing them to import less from each other. This China factor—coupled with the severe domestic economic shock—could cause deep damage to Italy, in the same way a disease attacks the feeble most ferociously. Italy has been in an economic coma since joining the eurozone in 1999, and it was in another recession when the coronavirus struck.

China itself appears to have contained new infections and deaths. And reports suggest that some Chinese factories have resumed operation. However, increased Chinese activity is not yet evident in financial markets. The Australian dollar, which appreciates visibly when China expands, is still testing the lows.

Moreover, even when China tries to normalize production, other countries must be ready to buy and sell. If, as now appears, the crisis will persist longer in Europe, China’s ability to pump up its own and global growth will remain constrained. Meanwhile, emerging markets—Argentina, Brazil, Mexico, Turkey—are also financially stressed as foreign capital is fleeing to the relative safety of U.S. dollar assets. For these reasons, restoring the global trade network and, hence, global recovery will take time. The prospect of a bounce back later this year, as many forecasters had hoped—and continue to hope—seems unrealistic.

The first impact of the economic crisis was on stock markets. In that initial assessment, stock markets recognized that Italy would be hardest hit. 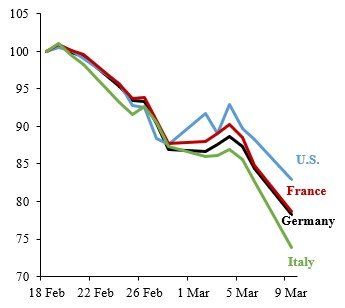 However, though stock indices were in free fall, there was initially no financial crisis. But danger lurked in the global credit bubble that had reached a dangerous peak. According to the Washington-based Institute of International Finance, the global debt outstanding doubled from $120 billion in 2006 to $240 billion in 2019, reaching 320 percent of world GDP. Every country and every type of borrower took advantage of the low interest rates to gorge on debt. Debt ratios rose especially for corporates and governments, and while the ratios for banks in advanced economies declined, they remained higher than those for other types of borrowers.

In the second week of March, once the economic threat of the coronavirus became clear, credit markets exhibited signs of stress. The stress levels were, and are, relatively modest compared to levels observed during the most intense phase of the global financial crisis between July 2007 and May 2009. Remember though that in that crisis financial tensions rolled mercilessly across various credit markets. As the epicenter of the crisis shifted to the eurozone, the cost of credit to companies, banks, and governments rose sharply.

There is reason to worry that the visible credit market tensions will increase and spread. Generally, financial crises are severe not just when outstanding debt burdens are high but, potentially more acutely, when growth slows down rapidly, making it hard to repay that debt. Today, with a sharp decline in output and high debt burdens a question mark hangs over the ability of borrowers to repay the that debt.

The Fed set the ball rolling by lowering interest rates (by reducing its policy rate and renewing bond purchases), injecting liquidity into the U.S. banking system and making dollar liquidity available to several central banks. Furthermore, the Fed promised to buy U.S. government debt in unlimited amounts, while backstopping other credit markets. The Bank of England took actions to lower rates and provide liquidity. The European Central Bank (ECB) has not reduced its policy rate but expanded its bond purchases to around a trillion euros for the rest of this year and added liquidity into eurozone banks.

These are important actions in a conventional financial crisis but, in the current context, band aids for a trauma patient. As long as spending is constrained by physical limits on movements and by the shutdown of factories and services to contain the virus, lower interest rates cannot help. Liquidity into banks supports ongoing operations; it does not spur new activity.

Fiscal measures, properly targeted, could be more effective. On March 20, the British Chancellor of the Exchequer set the benchmark with a bold promise: “Government grants will cover 80% of the salary of retained workers up to a total of £2,500 a month.” He promised unlimited interest free loans for 12 months to small businesses, as well as tax cuts and cash grants. Such economic life support is crucial to sustain those who are losing their livelihoods and need to pay for food, utilities, and mortgages. Other targeted help—such as more generous family leave—will also provide a critical safety net. In Europe, Germany, with an immediate injection of about 4.5 percent of GDP and other support has, so far, the most aggressive stimulus. The U.S., as with monetary policy, has the largest fiscal stimulus of around 9 percent of GDP.

In a second phase, once the worst of the virus contagion is behind us but when financial stress, even a debt default crisis, is still with us, a more generalized spending stimulus will help boost the economy through spending multipliers and by instilling greater optimism.

But there is an immediate task at hand. Borrowers will soon begin defaulting on their loans, creating a new set of challenges for policymakers. The question, at its core, will be: how will the losses due to the defaults be distributed? Will debt be written down, or will debtors be allowed to repay debt over longer periods of time?

Why Europe is so vulnerable

European economies entered 2020 in a weak economic condition. Since then the coronavirus hit their domestic economies hard. And because they are enmeshed in global trading relationships, their distress is acute.

European financial vulnerabilities are also severe. Government debt-to-GDP ratios in major eurozone nations—other than Germany—are near historical highs. European banks are fragile. While the banks’ non-performing loans are down, their profitability is low. The market-to-book value (MBV) ratios of major European banks were below 1 before the coronavirus peaked. With the virus, the market’s assessment became bleaker. MBV ratios fell sharply. Germany’s Commerzbank and Deutsche Bank MBV ratios are around 20 percent. And Deutsche Bank just warned investors it will be “materially adversely affected” by the downturn.

Each of these European weaknesses is especially acute in Italy: prior economic infirmity, size of the coronavirus economic shock, government debt burden, and fragility of the domestic banking system. The Italian government owes about €2.3 trillion, or 135 percent of GDP. Italian banks have assets with a paper worth of about €5 trillion. The true worth of the banks’ assets is likely lower and will fall further as the economy struggles in coming quarters. Italy’s Monte de Paschi bank has non-performing loans of about 17 percent of its assets. Even the strongest banks—UniCredit and Intesa Sanpaolo—have MBV ratios significantly below 1.

Eurozone governments cannot fiscally support a prolonged crisis. The German government, with the strongest fiscal position among eurozone members, plans to borrow about €350 billion, approximately 10 percent of German GDP. Recapitalizing the country’s banks may impose additional demands on the German government. The French and Spanish governments, with debt ratios of around 100 percent of GDP, have tighter fiscal limits. Perhaps, Germany and, maybe France, can increase their budget deficits to 15-20 percent of GDP before credit markets and rating agencies take fright. But, in addition to protecting themselves, are the Germans fiscally and politically willing and able to aid those unable to spend their way out of this crisis?

Three weeks ago, it seemed to me appropriate for Italy to receive a precautionary credit line, anchored by the eurozone’s bailout fund, the European Stability Mechanism (ESM). But as the crisis has continued its fearsome course, and now threatens Spain with a financial crisis, the ESM clearly lacks adequate firepower. Moreover, the ESM lends to countries in distress, and Italy and Spain need more than loans. They need sizeable fiscal transfers (in the hundreds of billions of euros), grants of the type built in for states—although inadequately so—in the U.S. stimulus package. Grants on this scale are taboo in Europe, where the political discussion is still centered around various alternative lending mechanisms.

Eurozone policymakers are relying, therefore, on the ECB to save the day. The ECB could keep buying the Italian government’s debt to prevent a default. But it is not the task of a central bank to deal with insolvencies. Moreover, such an effort would be technically and politically fraught for the ECB, which is not a normal central bank. The ECB is the central banker to a confederation of nations, each of which maintains fiscal sovereignty. If Italy is pushed to the brink, the ECB will struggle to help. The current ECB bond-buying limit of a trillion euros is designated to purchase the bonds of all member states. Italian government debt is over two trillion euros, which will increase further if the government is forced to financially prop up the country’s banks. If Italy is bailed out, other member states on the ECB’s Governing Council will face buying so much Italian debt that the ECB would own Italy. If then, the Italian government is unable to service its debt to the ECB, other member states will face the charged task of using their tax revenues to replenish the ECB’s capital.

Alternatively, leaving Italy to fend for herself could cause widespread Italian defaults, triggering defaults by those who have lent to the Italian government and banks. A cascade of defaults would go up the chain to European and global pension and insurance funds, inducing a global financial panic.

At this moment of global crisis, the test is going to be whether each nation takes care only of itself or whether the strong help the weak. But will the strong remain strong long enough?

Ashoka Mody is the Charles and Marie Robertson Visiting Professor in International Economic Policy at Princeton University and previously was a deputy director of the International Monetary Fund’s European Department. He is the author of “EuroTragedy: A Drama in Nine Acts” (U.S., U.K.), recently updated with a new afterword.