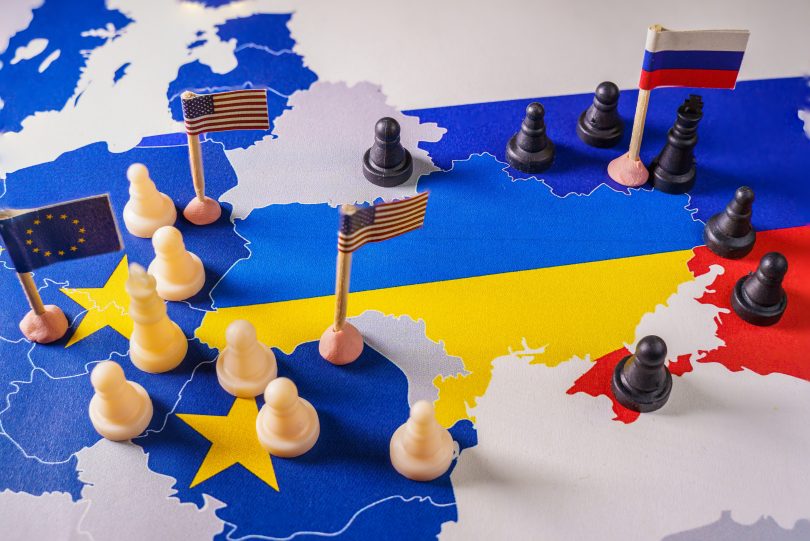 In trying to understand the present crisis in the Ukraine, and suggesting how further disasters can be avoided, history has some lessons. But they are not very reassuring.

Catastrophe can come out of the blue.  Shortly before Britain was dragged into the devastating French revolutionary wars, the Prime Minister William Pitt reassured the Commons that ‘there never was a time in the history of this country when … we might more reasonably expect fifteen years of peace.’  In 1938, Neville Chamberlain won global plaudits for securing ‘peace for our time’.  In 1914, just before the German army marched in, the French public was wholly absorbed by the trial of a politician’s wife who had killed an indiscreet journalist.  (She got off.)  Might future generations wonder how we in our turn could be so focused on Omicron and illegal Christmas parties while Russian armies mustered, the Chinese airforce menaced Taiwan, and Iran stood on the brink of making the nuclear weapons that Israel had sworn it would never permit?

There are lessons from these past disasters, not all of them encouraging.  First is that a potential disturber of the peace must think it can win—but so must those resisting it.  No one, however unbalanced, embarks on a conflict they expect to lose.  The weaker side backs down.  As long as the United States was clearly predominant—which it generally has been since 1945—there would be no direct Great Power clash.  It is when the balance of power becomes uncertain that danger arises, because both sides can anticipate victory.  Nuclear weapons for a time seemed to have changed the rules, but only if it is credible that they would be used.  Now it is not.

Second, aggressors must think they can win quickly and at acceptable cost—‘over by Christmas’ is the fatal illusion, often coloured by ideology.  In 1792, both the French revolutionaries and their monarchical enemies were confident of a rapid walk-over.  The former trusted in revolutionary fervour; the latter in professional discipline.  In 1914, both sides had planned a quick and decisive campaign.  In 1940, Hitler expected the decadent British to make peace, the materialistic Americans to stay neutral, and the inferior Russians to collapse.  In both cases Germany’s rulers knew they would lose a long war.

Third, and perhaps most dangerous, is when a potential aggressor thinks that time is running out.  Since 1870, Germany had been a rising force, economically, culturally, and militarily, and so its rulers saw no reason to seek trouble.  But by the 1900s, the rise had stalled, and Germany’s chances of becoming one of the leading world powers was slipping away.  Its rivals seemed to be ‘encircling’ it, and preparing for war.  The German army and its Austrian allies believed in 1914 that they could still win, and quickly; but only for another couple of years.  The Nazis similarly believed that their time was running out, and only bold and decisive action could save them.  If you think conflict is inevitable, logic means you act fast, whatever the risk.  As the Austrian chief-of-staff put it chillingly in 1914, ‘now we play va banque’.  Hitler used the same gambling metaphor in 1939.

None of this is reassuring.  Today, Russia is still powerful, but in decline.  China until recently appeared to be in unstoppable ascent.  But now its economy is stalling, its population ageing, and (like Germany before 1914) it has alarmed its rivals.  Its rulers may be starting to feel ‘encircled’ as America, Japan, India and now Britain start to react.  Russia may not have had much time left grab Ukraine.  And if China wants Taiwan, both for prestige and for its semiconductor industry, its chances may not be improving.  As for Iran, is it already too late for it to develop usable nuclear weapons, or will it rush to do so while its enemies hesitate?  Who might play va banque?  Is Putin only the first?

Could past generations have staved off the disasters of 1792, 1914 and 1939?  Even with hindsight, there seem no simple solutions, no moment at which any politically feasible action could have saved the world.  Take the most notorious case, the Munich Conference of 1938, when Chamberlain made a last attempt to ‘appease’ Germany.  We now know that had France and Britain gone to war, Germany would have been fighting a losing battle and its generals would probably have overthrown Hitler.  Disaster averted?  But the peoples of Britain, France, the Empire and the United States were not then reconciled to fighting for Czechoslovakia, ‘a faraway country of which we know nothing’.  Chamberlain’s concession was almost universally, even hysterically, praised.

If we venture into political science fiction, we have a little more scope.  The best chance of preventing these three global wars would have been a broad alliance—strictly defensive, but clearly willing and able to resist aggression.  To deter the French revolutionaries, an alliance based on Britain, Prussia and Austria.  To deter the Kaiser and Hitler, an alliance of France, Britain, and Russia, and with the United States, already the potential superpower, prepared to intervene.  These alliances, which eventually came into being as a result of those wars, would have been the best chance of preventing them if they had existed before conflict broke out.  That was impossible then, because of deep mistrust between the Powers, and because of America’s determined isolationism—always tempting for a country which can be self-sufficient if it has to be.  But what was impossible in 1791, 1913 and 1938 may not be impossible today.  Indeed, NATO is precisely this kind of defensive alliance.  Involving America in the relations between the major states has been the core of Britain’s international strategy since 1940, indeed perhaps since 1916; and in the end it worked.  At least until now.   President Macron has declared that NATO is brain dead.  Will he now be proved right?

The first aim of the democracies must be to prevent fatal miscalculation by potential aggressors: to convince them that they cannot win quickly and at low cost.  Conflict delayed may be conflict averted, if potential aggressors come to accept that their ‘window of opportunity’ has closed.  This of course is basic deterrence.  Until recently, many hoped that the rulers of Russia and China were less ideologically driven and hence more rational than the revolutionaries of 1792, the racists of 1939 or even the social darwinists of 1914.   But the attempt to deter or persuade Putin proved vain.

Must there be carrots as well as sticks in preventing conflict?  The danger is that conciliation is hard to distinguish from ‘appeasement’, and may encourage aggression.  One advantage we have over earlier generations is that we can communicate more effectively with the peoples of hostile states, in a way the aristocratic diplomats of 1914 would scarcely have contemplated.  The democracies must show the peoples of Russia, China and Iran that we are not their enemies.  We have to trust that our highest values are of universal appeal, and not just a ‘Western’ peculiarity.  For that, we need to regain the confidence to speak not just for ourselves, but for people everywhere.   But Putin has shown that words are not enough, unless they are packed by firm intentions and hard power.

An earlier version of this article was published early in January by the Daily Telegraph.