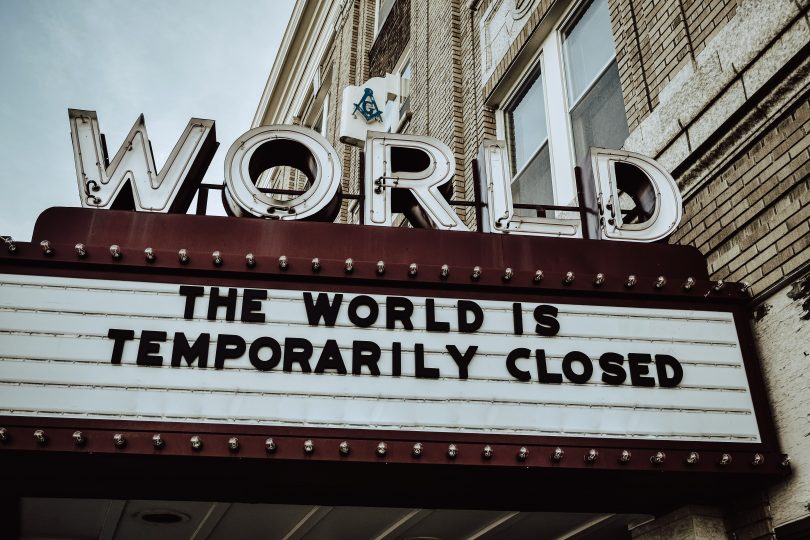 The control of Covid-19 has been a public health and an economic failure. Cameron Bowie, a public health physician, argues that the mix of scientific arrogance and belief in the private sector are to blame and will need to be reversed if control is to be successful.

Most of us are fed up with Covid-19, some because the economy is in tatters, some because of the never-ending restrictions and some because of the failure to control transmission despite our sacrifices.  It is intensely frustrating to see us flounder while some countries particularly in the far east are enjoying near normal life.  All western countries have had a hard time but why have Anglo-Saxon countries fared so badly?  Could it be a mixture of scientific arrogance and the belief that the private sector can provide a public service better than the public sector?

A failure to learn from Asia

It is a common belief that our scientific expertise in infection epidemiology is top class and with justification.  Our modellers are probably the best in the world and have taught many scientists who now practice abroad.  There was misplaced belief that we did not need to seek help from others who had recent experience of SARS-CoV1 and MERS-CoV and who were battling with SARS-CoV2.  We knew it all; we understood everything about epidemics.  How wrong we were.  We would have stopped the virus in its track if we had followed their advice.  Our scientists would have learnt that this was not influenza and our politicians would have learnt from Ying Yong, the Party Chief of Hubei Province, how decisive action works.  This is what he could have told 10 Downing Street in February.

Please note that from a public health point of view they could do this without a Covid-19 test and did so to start with as quarantine and isolation can be based on symptoms.  All you need is a case definition and that was available.  Our leaders could have read the WHO/China Joint Mission Report which was published on 24th February if Ying Yong was too busy to tell us what to do.  The report set out what had happened in China and what to do at home.  The differences between this guidance and the WHO guidance for Influenza are stark[i].  The yellow cells highlight the main differences between the two sets of guidelines.  The coloured red text identifies those interventions recommended in the Joint Mission Report which spells out this advice “Achieving the high quality of implementation needed to be successful with such measures requires an unusual and unprecedented speed of decision-making by top leaders, operational thoroughness by public health systems, and engagement of society”. 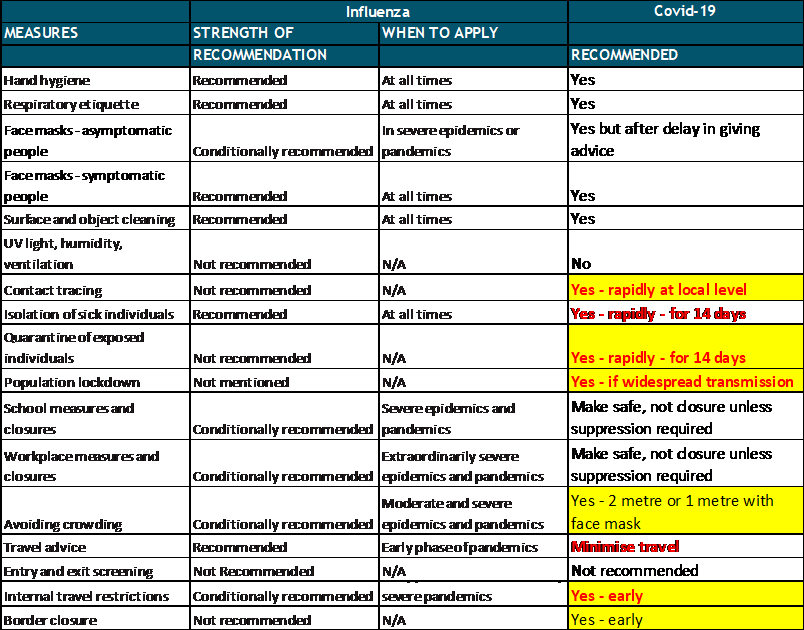 Singing from the wrong hymn sheet

It is easy to forget just how badly we sang!  We did not close borders, we did not help cases isolate, we stopped tracing and isolating contacts and we ignored masks.  On 30th April the Chief Medical Officer gave a masterly lecture at Gresham College describing the epidemic and what was needed except for one thing.  He failed to mention contact tracing.  So even at that late stage he was singing the flu tune.

The scientific arrogance was widespread.  Richard Horton, editor of the Lancet, was in despair when he appeared before the Science & Technology Select Committee in March[ii].  He had published top quality papers from China and clearly no one was reading them!

Belief in the private sector

It is understandable that Ministers who do not trust the public sector run in a crisis to the private sector which is seen as agile, flexible and outcome driven.  But it is unsurprising that the private sector model does not work delivering public health interventions.  After all the epidemic is made up of a myriad of local outbreaks.  Public trust is crucial if quarantine is to be obeyed.  Who do people trust in a health crisis? – their GP.  Who knows the local problems? – the NHS and local councils.  Public health works best with GPs organising the tests, the local hospital laboratories doing the tests and the local authority doing the contact tracing and quarantine.  Instead we had Serco, Sitel and Health Professionals in impersonal car parks and call centres doing their best in impossible circumstances, engendering mistrust and non-compliance.  £12 billion has been spent on Test & Trace.  Could it have been better spent building up the local capacity used in Wuhan?

What is to be done?

The attempt of the private sector to Test & Trace is failing.  Testing without isolation is useless.  Lockdowns seem to be the only way to control the epidemic which means the economy will continue to be hammered.  Public trust is eroding.  Vaccines will help but will not eliminate the virus which will be around for years.  Failure needs to be turned to success and to do that we need a public health strategy – a Ying Yong strategy – bold, coherent and based on public health principles.

Such a strategy can

Are we too arrogant to admit our failings and seek advice from those who have succeeded?  Is it a pie worth eating?

[iii] Modelling the health and economic impacts of different testing and tracing strategies for COVID-19 in the UK.  Published 11 Dec 2020. F1000.