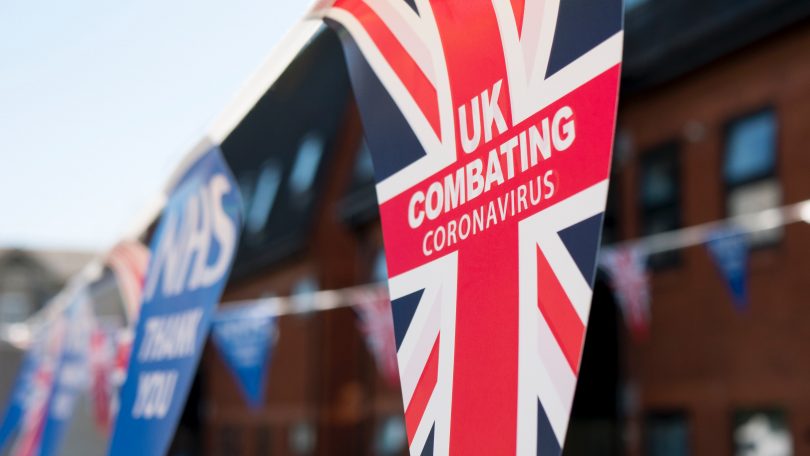 It is now clear that vaccinations are saving lives in the Covid pandemic. The faster the rollout of vaccines the more lives are saved. This means of course that the late and slow rollout in the EU is costing many lives that could have been saved with a UK-style vaccination programme.

Who could have predicted that the pandemic vaccines would provide an immediate and dramatic demonstration of the superiority of a nation state over a lumbering EU? The European Commission had little traditional competence over health affairs but decided to take control of the roll-out of vaccines. The rationale was that it would play Robin Hood and gather in vaccines from pharma companies and distribute them across member states according to need. It argued that it could use the huge buying power of the EU to strike the best deals. All member states were cajoled into handing over vaccine procurement to the Commission. We can assume that if the UK had still been a member it would have come under great pressure to adopt this ‘communautaire’ course of action.

As we know, things did not go well. In attempting to drive down the price of vaccines and to shift product liability onto the pharma giants, the EU Commission slowed things down and took three months to strike deals. It also backed some wrong horses. By trying to support EU producers, including the French Sanofi company, it backed some firms unable to supply vaccines until late in 2021. As we also know, the problem was then compounded by attempting to shift the blame for slowness in obtaining vaccines onto the pharma company and especially the Anglo-Swedish AstraZeneca.

Counter-productive decisions were also made in several EU countries to judge the AZ vaccine ineffective for the over 65s, even as the European Medicines Agency pronounced the vaccine effective. Although these countries, including Ireland, based their views on an absence of proof rather than a proof of absence, many people assumed that latter. As evidence emerges in the UK and elsewhere that the AZ vaccine is safe and effective for all ages, several of these countries are still not using it for all of the elderly. Even worse, the doubts sown in people’s minds about the AZ vaccine, especially by President Macron (a European example of Trump-style fake news), have compounded existing popular reluctance to be vaccinated. As a result, warehouses full of AZ vaccines were not until recently being used. 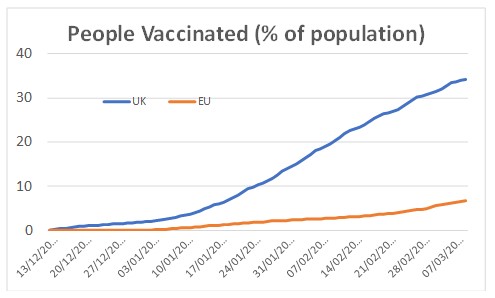 Vaccinations began to be rolled out in the UK on December 13th with an acceleration after New Year’s Eve when the AstraZeneca vaccine was approved for use. By the third week in March a third of the UK population had been vaccinated including nearly all of the most vulnerable over 70s age group. In the EU, the later start on December 27th and late approval of the AZ vaccine on January 27th 2021, plus a much slower roll out, meant that by the first week in March only 6% of the population had been vaccinated.  The tendency in some EU countries to administer second vaccinations means that fewer people are being vaccinated for any given number of vaccinations. Ursula von der Leyen’s unfounded recent claim that the EU was catching up with the UK has done little to help public confidence in the Commission.

Slow and late vaccination roll-out will lead to unnecessary infections and deaths. In this article we attempt to calculate how many deaths are saved by timely vaccination and hence how many lives are likely to be lost by slowness.

Vaccination in the UK

Since it typically takes around 30 days from infection to death, we can expect vaccination to begin to affect deaths from mid-January.  To estimate the number of lives saved we take the difference in deaths from mid-January between the vaccinated groups (i.e. 60+) and the unvaccinated under 60s. The chart above shows that deaths have been falling fastest among the most elderly since mid-January. This difference did not occur during the first Covid wave last Spring, which suggests that the vaccines may well be responsible this year.

Using the gap between the vaccinated and non-vaccinated groups we calculate that 6600 lives have been saved in English hospitals up until the latest actual data (March 5th). We project a further 500 lives likely to be saved by the end of March giving a total of 7,100 for the whole period to the end of April. Vaccination rates are planned to be substantially increased from the already impressive rate of close to half a million per day to around 700,000 a day and more lives may be saved after that, even though many vaccines will be used for second doses from mid-April.  Since 92% of deaths have thus far occurred among the over 60s there will also be fewer deaths to save from after March. These figures might be up to a third higher if deaths at home and in care homes are included.

Similar figures can be obtained using modelling results from the Covid Actuaries Group. They assumed that the vaccines are 100% effective in preventing deaths and that take-up among the over 70s was total. This led them to predict a 40% reduction in hospital deaths among the over 70s by February 21st and 86% a month later. Using these values, we calculate that 4,300 deaths have been saved in UK hospitals by March 5th and 8,000 by the end of April. These numbers are broadly similar to our earlier estimates.

Although these estimates suggest an impressive number of lives saved by vaccination up to Spring 2021 this is not the end of the story. The number of lives saved would have been very much greater in the absence of a lockdown or with much poorer public observance of the rules. Perhaps most importantly, the vaccines should prevent further Covid waves and allow the economy to remain fully open from early summer 2021. The economic value will be immense.

Vaccination in the EU

As shown in the first chart above, the roll-out of vaccines in the EU started later than in the UK and has lagged far behind. By the end of February only 5% of the EU’s population had been vaccinated. This is less than the 7.5% overall rollout of vaccines because, unlike the UK, around one third of vaccines are being applied as second jabs. If the somewhat faster growth rate of vaccinations over the last week in the EU can be maintained, a third of the EU population will have been vaccinated by the end of April. At this point nearly three-quarters of the UK population will have been vaccinated (en route to the Government target of all adults vaccinated by end July)

It is difficult to assess the potential number of deaths which could have been saved by a faster vaccine rollout, but a ballpark estimate is possible using the UK Covid Actuaries estimates of the proportion of deaths saved in the over 70s, assuming that these apply equally in the EU as in the UK. Using this approach, we estimate that around 500 deaths had been prevented by vaccines in the EU by March 5th and that around 21,000 would be saved by the end of April.

Many more deaths would be saved if the EU was able to match UK rollout rates. The number of extra deaths predicted to be saved under a UK rollout regime also depends on how well the current lockdowns work across the EU in preventing deaths. The chart below shows that the EU has generally suffered proportionately fewer deaths than the UK but there is not yet a marked decline from the second wave. The number of cases has risen again over the last three weeks and it is unclear whether a 3rd wave might occur. We have calculated the number of extra deaths on the basis of deaths of unvaccinated people either continuing to subside across the EU or remaining stable. On this basis, we estimate that the failure to match the UK rollout trajectory would result in between 80,000 and 140,000 unnecessary deaths occur depending on the effectiveness of lockdowns. If a third wave did materialise the losses would be much greater. This uses the Covid Actuaries modelling estimates and assumes a range of reductions in deaths during lockdown[i]. If a third wave were to be widespread across the EU, the number of deaths which could have been saved by a faster vaccine rollout would be considerably greater than this. 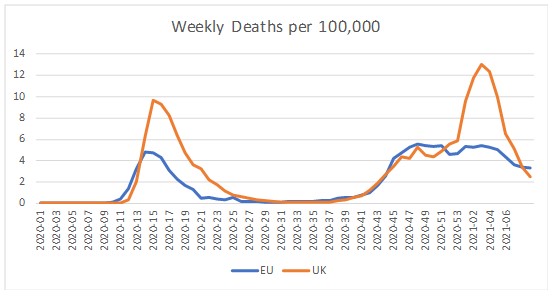 Note: This data from the European Centre for Disease Control and Prevention includes deaths in all locations and not just in hospitals

It is clear that Covid vaccinations saves lives. Even though the number of lives saved depends on the speed of rollout of the vaccines, under almost any rollout scenario the slow rollout across the EU will result in large numbers of avoidable deaths. In the UK we estimate that over 7,000 lives will have been saved by the end of April largely among the over 60s. In the EU we calculate that the numbers of lives actually saved will be proportionately much smaller than in the UK and that 80,000-140,000 more deaths could have been saved by the end of April with a UK-rate of rollout. The precise number depends on how effective the current lockdowns might be across the EU, since with more effective lockdowns there will be fewer deaths. A third Covid wave in the EU would mean a potentially much larger negative impact of the failure to match the UK’s vaccination rate.

[i] These range from a slower decline in Covid deaths of 3.5% per week to a rapid decline of 15% per week.