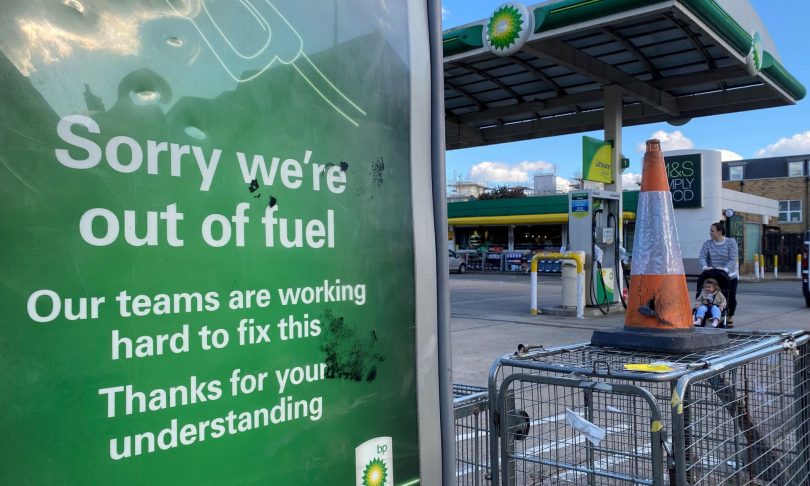 Rejoiners United are blaring that the fuel drama is – at last – real and present evidence of the harms that Brexit is causing. Gina Miller is leading the fresh call for Brexit to be overturned. But she and her bitter-enders are plum wrong. The systemic cause of the crisis is the legacy of economic and infrastructure deformations cause by our membership of the EU. The proximate cause is also that legacy, plus the eco-loons repeated blocking the M-25 and the failure of the Police to sweep them instantly away.

You always know when to switch on your fake news detector. The cue is when Gina Miller pops up. This time, along comes our heroine to taunt the Prime Minister for silence over Brexit’s responsibility for the recent fuel shortage mass panic. Ms Miller, of course, has a well-burnished record of inaccuracies during her time at the heart of Project Fear: inaccuracies which this website has patiently and politely rebutted with facts during her tantrum years. However, on this fresh charge she deserves rougher handling, not least because she had the poor taste to attack the PM on the day of his mother’s funeral, eliciting a suitably tigress-like savaging from his sister Rachel, well known for not sharing his views on Brexit, but who loves her brother.

Of course, the poster girl of remain/remoan/rejoin has not been alone this week. Suspiciously not alone. In fact, we are promised an army of Rejoiners fresh from promenading in the Royal Albert Hall on the Last Night (sigh, again), descending in serried ranks upon hapless Manchester like a besieging army to demand that Brexit be stopped (what? again? still?) because – look! see! – just as they had predicted would be the case, Brexit had – eventually – caused mayhem in something and here it is: our fuel shortage crisis. Top marks for no sense of irony. nul points for factual accuracy.

The fuel panic blew across the country like a late summer storm from a more or less cloudless sky. Unpicking the technical, political and psychological meteorology of this event is actually rewarding because it reminds the majority of the country that either voted to leave the EU or is grown-up enough to have long ago accepted a democratic result, that these bittereinders will never give up and will clutch at any excuse of any sort whatsoever to hope to overturn Brexit, politically and legally impossible as that now is, especially with Lord Frost in charge.

To begin at the beginning: there are proximate causes and there are systemic causes. The systemic causes implicate not Brexit but the legacy of our EU membership – the inverse of the Miller position – and the proximate causes show the role once more of the legacy of our EU membership, but also of fluid mechanics working cybernetically with public paranoia: on and with a collapse in public trust in what government says. “Don’t panic” translates à la Corporal Jones into “panic! panic!”

On 28th September, Mr Peter Bryson wrote to The Daily Telegraph from Yorkshire. His letter led the correspondence and deserves to be quoted in full, with a gloss:

SIR – As the senior project manager who built a large proportion of Tesco’s distribution network, I have an explanation for this fuel crisis. [at last, someone who actually can pay the entry price to know what he’s talking about]

First, ever since UK-resident HGV drivers’ wages were undercut by the influx of European drivers 18 years ago, a shortfall in their numbers has been a big challenge. [therefore a result of loss of control over our borders. See Catherine McBride’s article, also on Briefings for Britain,  for an economist’s extended analysis of how the labour market has been broken; of the causes of declining HGV driver numbers – which, in comparison with other industries, she shows are not exceptional – which illuminates both the fakeness of the charge of Brexit causation and the greed of big haulage contractors. To that can be added the bumbling incompetence of the Department of Transport in failing to support and process new UK entrants to the industry, the epic incompetence of the DVLA in failing to licence them and the unimaginative incompetence of the Treasury in failing to withdraw its tax vacuum-cleaner from them.]

Secondly, in that period, our nation became far too reliant on two pieces of infrastructure: the port of Dover and the M25. Too many imports are routed through these two choke-points. [This is vital: a direct result of the switch from the far more resilient, globally distributed, food sourcing forty years ago to too great a reliance on the European markets. Thankfully we are on the road back to most of the world. In Truss we trust.]

Thirdly, with a pandemic and Brexit to cope with, over the past 18 months all transport operators’ networks have been fully stretched. [The pandemic has been the catch-all excuse for much of the public sector to stop working: schools; hospitals – but in this case most especially HGV testing and licencing. ‘Brexit to cope with’ actually translates as coping with, on the one hand, the legacy of the May years when the preparations for trading as a sovereign nation once more were not advanced, because the aim was to stay in or under the EU and, on the other, four years of French spite that, as ‘CB’ has just explained on this site, is now reaching a crescendo of guileful petulance and bad faith.]

When a few protesters blocked this critical infrastructure for a fortnight, many HGVs were stuck in those very long traffic jams. [Here comes the fluid mechanics. Roads are built to carry expected volumes of traffic. If the weight of traffic exceeds what is known as its ‘link capacity,’ traffic engineers know that the flow of traffic behaves like a fluid under pressure in a narrow pipe. Thus, when a bad crash – or a few deranged eco-loons who amazingly the Police fail to remove instantly from the carriageway, instead inquiring into their comfort and restraining enraged motorists who understandably wish to go about their lawful business – blocks the pipe, the shock wave that passes back down the flow can quickly extend very far. Drivers first experience it as traffic slowing, seemingly for no obvious reasons, and then speeding up again (as a wave passes through) before reaching the back of the standing tail-back. It’s a common experience on the M-25.  Ashby’s Law can ameliorate such rolling shock waves – see below.  It’s application is expressed in variable speed-limits. In the case of the current fuel panic, as Mr Bryson observes, fuel tankers were caught up and so missed their delivery schedules…]

This caused a few petrol stations in the South East to run dry. [a few, note: there are now 35% fewer petrol stations than there were in 2000; so logically a smaller number of higher throughput nodes in a sparser network means that disruption can affect more people directly more quickly than in a richer and less fragile network. This signal translates directly into information in what is, in fact, a self-organising complex adaptive system. Ashby’s Law of Requisite Variety applies in such systems and states that the amount of disturbance can be diminished only by the amount of blocking information matching or exceeding that of the disruptive force. (Ross Ashby was the founder of the modern science of cybernetics). Therefore, if,  rather than countering information which blocks it,  mistrust of official information injects false information, it amplifies the disturbance and…]

Panic buying has done the rest.

In sum: the eco-loons are the proximate trigger whether they know it or not;  and the legacy of distortions from our membership of the EU are the structural causes: the inverse of the beliefs of the Rejoiner army.

Also on 28th September, Mr Grant Shapps the Minister for Transport stated on the BBC that “Brexit I hear mentioned a lot, [well yes you do – from the Freight Transport Association, from the Millerettes and the other bittereinders] and it no doubt will have been a factor…”  This statement needs to be subjected to the Corporal Jones test.  “no doubt?” Really?

Damagingly, Mr Shapps is conceding ground unnecessarily and furthermore whistling in the dark. As I’ve explained, what he meant to say – had he been better briefed – was “every doubt.” But then he’s only the Minister of Transport so, given the lamentable state of his Department’s civil servants who carry much of the responsibility for making a full-blown crisis out of a drama, what would he know?

Lesson number one: whatever Ms Miller states to be a case, make your hypothesis the polar opposite. Investigate on that basis and, as here, the evidence that supports the inversion will likely soon reveal itself.

Lesson number two: always rely on the grown-ups in the room, like Mr Bryson, who can pay the entry price of actually understanding a problem from deep experience, to help you. (Basic research 101); and be grateful to Mr Bryson for taking the trouble to write and to Christopher Howse, the Letters’ Editor who published his letter so prominently in the Daily Telegraph.

Lesson number three: ensure that all Traffic Division operational commanders in Police Forces have been taught elementary traffic flow physics (if they haven’t been already) so that they fully, deeply understand from physics principles why they need to sweep any sort of detritus from carriageways as quickly as possible; and ensure that the No 10 Media Team has a basic lecture in cybernetics and specifically that it fully and deeply understands Ashby’s Law of Requisite Variety: how it is central to combatting fake news and how it works in media management.