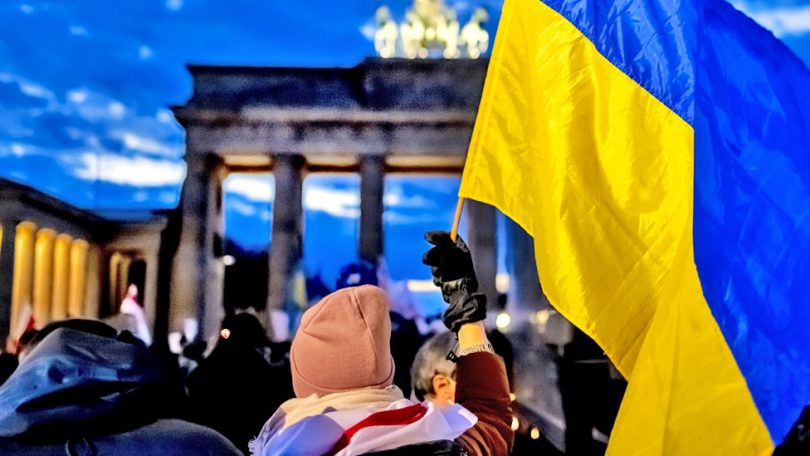 BfB Advisory Board member Nick Busvine OBE was one of the panellists at a lively Battle of Ideas debate chaired by Baroness Claire Fox on 20 April on the topic: ‘United We Stand: Ukraine and the Future of the West.’ A full livestream of the event can be seen here. Nick had some pithy observations to make – not least on Germany and France. We reproduce his opening remarks below.

This is a seminal moment – with Putin’s regular veiled warnings about possible use of nuclear weapons a grim reminder of what is at stake.  At times like these we have to constantly remind ourselves that life is not a rehearsal.  This is it.  We are at a key moment of history.  When terrible things happen, the character of peoples and their governments will be judged by how they respond – not in terms of pledges and statements of good intent, but what they do now, in real time.  This is a profoundly serious situation that poses a set of threats not seen since WW2.  This should serve as a reminder to us all of what is really important – and what it is that unites freedom loving peoples.

And those unifying principles are surely liberty, freedom of speech and democracy.  In short, the ability of ordinary people to peacefully hold those in power to account.

Contrast this with the self-loathing manifested in our culture wars; and growing suspicion among western elites about the value of democracy in the face of the ‘wrong’ outcomes – which is often coupled with a penchant for globalist institutions that are difficult or impossible for humble voters to hold to account.

The situation in the Ukraine is deeply complex.  But even to the non-experts among us, the reality of what Putin is trying to achieve and how is now abundantly clear.  It also seems reasonable to conclude that the Minsk accords were always doomed – subject as they were to mutually incompatible interpretations on both sides.

Given their role as Minsk mediators and their familiarity with the challenges to achieving a stable solution, the willingness of France and Germany to plunge into deeper commercial relationships with Russia since 2015 surely begs questions.

According to an Investigate Europe report published in March – sanctions notwithstanding – the leading EU suppliers of weapons to Russia during 2015-20 were France (Euros 152m) and Germany (Euros 122mn).

But it was Germany’s willingness to impale itself so comprehensively on the Russian gas hook that almost beggars belief.  Smart politicians like Rory Stewart were almost tripping over themselves a few short months ago to praise Angela Merkel as a model European leader.  Well, that doesn’t look smart now.  It all looks terribly naïve – or worse…

Since 2016 there have been endless Remainer attempts to label Trump, Trump supporters and Brexiteers as Moscow collaborators.  But the attempts to smear Brexit in this way have simply not stood up to scrutiny.

On the other side of the Atlantic, the inadequacies of the Steele dossier have now been thoroughly exposed.  And, whatever any of us might think about Trump, the simple truth is that he warned us all explicitly of the pickle the Germans were getting themselves into during the 2018 NATO Summit (as clips on You Tube attest).

Moscow’s useful idiots, it turns out, were not the dreaded ‘populists’ in the UK and US.  They were the so-called adults in the room, the mainstream EU leaders who chose to place commercial and economic interest ahead of core principles.

Why did Putin invade? He obviously harbours a strong belief that Ukrainians are part of the wider Russian people.  But I also assume he took confidence from evidence of Western weakness – a sense perhaps that the West has lost faith in freedom and democracy, that it can be bought off and corrupted.  Maybe this was a perception shared in Beijing?

And one can see why such conclusions might have been drawn by a hostile observer of foreign adventures such as Iraq and Afghanistan and the domestic debates that rage on both sides of the Atlantic around identity politics and history.  But, even more worryingly, I cannot help but wonder if Putin took comfort from the apparent loss of confidence among our elites with popular democracy.  Maybe Putin will have drawn confidence from the degree to which many of our great and good now feel entitled to disavow election results they do not approve of on the grounds that they are ‘populist’.  I have served in too many places where there is no commitment to accountability and democracy is a charade: in other words, ‘democracy is fine, just so long as I win’.  An approach Putin himself clearly feels comfortable with.

So, what does this mean for the West.  First, there is the good news: the invasion of Ukraine has reminded us what it is that is really important – and what we should be prepared to defend with our lives.  The Ukrainian defence of their land has been humbling; the support from most neighbouring East European and Baltic states has been unstinting and whole-hearted.  The use of intelligence by the US and UK ahead of the invasion was brilliant – and effectively destroyed Moscow’s ability to control the narrative.  The crisis has breathed new life into NATO.  While Trump’s warnings about NATO fell on deaf ears in the heart of the EU – with Macron declaring in 2019 that NATO was brain dead in a dig against the Americans – we now see the prospect of Sweden and Finland actually joining.  Germany has finally promised to up its military spending. Despite President Biden’s odd comment about a limited NATO response to a ‘minor incursion’ into Ukrainian territory, the US has now provided an enormous amount of military support to Kyiv.

The UK response has been particularly strong.  Boris Johnson may have driven us nuts over ‘Partygate’ and a failure to get a grip in various domestic policy areas, but on Ukraine he has played an absolute blinder.  My Briefings for Britain advisory board colleague Professor Gwythian Prins has gone so far as to conclude: ‘Boris was essential in mid-Feb in backing up Ben Wallace against ……assorted ‘securocrats’ who would have blocked the sending of the early consignment of NLAW anti-tank weapons…  HAD THE UK AND THE UK ALONE not made those transfers – and had not delivered the training of 22,000 UAF regulars since 2014 in Operation Orbital – this war would have been lost in days 1-3.’

If that isn’t evidence of post-Brexit Global Britain in action, I simply do not know what is.  The speed and agility of the UK response to this crisis – bilaterally with Ukraine as well as in a NATO and Joint Expeditionary Force context – has made a mockery of Remainer initiatives to begin to squeeze us back into an EU defence and security architecture that is not fit for purpose

On the negative side, we have seen some frankly unhelpful efforts on the part of EU integrationists to compete with NATO.  Yesterday, we learnt that Germany will not supply the heavy weaponry Ukraine desperately needs to withstand the Russian Donbas offensive. Macron and Draghi were also reticent about extending military support.  Worse, we continue to see slow pedalling on Russian oil and gas, most notably in Berlin – which means that Moscow continues to receive the core funds it needs to prosecute this despicable invasion.  Yes, sanctions on Russian gas would be incredibly challenging but the Germans, in particular, have to confront the consequences of their extraordinary Ostpolitik policy.  Berlin and Paris were perfectly prepared to see Greece, Ireland and other states endure economic pain to save the Euro project (as well as French and German banks) a few years ago.  No one has put the point more eloquently than Volodomir Zelenskiy himself when he addressed the German Parliament in mid-March: ‘We warned you. We told you Nord Stream was a preparation for war…  we were answered, it’s a question of business. It’s business, business, business.’