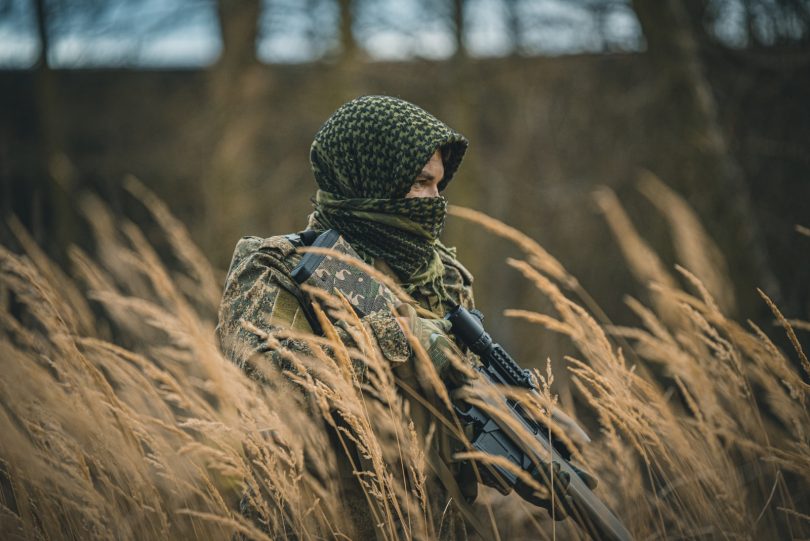 Ex-paratroop and senior diplomat Adrian Hill asks, ‘what on earth is Vlad up to’? To him it all looks a bit like the gambler’s last throw. Much will depend on Russia’s economic and military strength relative to the USA and key European states including the UK. Let’s take a look at the miliary capacity of the USA, ourselves and Russia in that order

Of the three, only America is a real super-power. US defence spending at $767bn in 2020 is well over twice that of China and Russia combined. Only America has kept its armed forces strong enough to fight globally in two or more places, far apart, at the same time. The US Navy and the US Air Force are the most powerful on the planet. With nearly 500 ships including 11 super-carriers and 70 submarines, 14 of them armed with ballistic missiles and 4 armed with rapid fire cruise missiles, the US Navy is a fearsome force. Ask any Chinese Admiral late at night over the rice wine.

The US Army has been trimmed – it used to be able to fight two major campaigns and a smaller war at the same time, now it can fight one big one and one smaller one at the same time. That’s probably the reason for bug out from Afghanistan. None the less, the US Army is half a million strong with reserves of a million, keeps ten active divisions and many independent brigades and regiments at full readiness in places as far apart as Hawaii and South Korea and Vincenzo in Italy.

Two brigade combat teams from the 82 US Airborne Division have flown the Atlantic and are now positioned in Germany. Both number about 3,000 paratroopers and every squad has an anti-tank guided missile launcher. Two squadrons of F 15 fighters have also been forward positioned in Poland and Romania.

I would have thought that any US moves to chase the Russians back to Russia will focus on naval and air power and mounted from the Thracian Sea.

That’s where the USS Harry S Truman patrols with ninety aircraft on board. US Naval Institute News reports that four Aegis destroyers – capable of shooting down ballistic missiles – crossed the Atlantic individually and have joined the air strike group escort force, already strong and now nearly thirty ships.  That’s more US Navy ships in the region than since 2018 and the Syrian War.

What has not been revealed is whether any of the big Ohio class, former deterrent subs, nowadays loaded with rapid fire cruise missiles, also have joined. Odessa and Crimea or an invasion fleet are within very comfortable range, allowing for loiter time to catch moving targets. The absence of a second air strike group points in that direction.

Our GDP at $2.9tr is only one tenth of the USA and a fifth of China but is not far off Germany’s $3.8 tr and is well above Russia ($1.5tr). However, the USA spends 13 times as much as the UK and despite having a smaller economy, Russia spends a fifth more than the UK. From our point of view this crisis would have been easier to handle after a ten year rearmament programme. Boris Johnson’s government is increasing spending on defence but the way Putin has caught us on the back foot is a lesson on why we need to restore our armed forces until they have three times as many ships, submarines and combat squadrons as they have today. Our Army needs to join the modern world where all the helicopters it deploys, including heavy lift, belong to the soldiers rather than the airmen. The US Army did this in the early 1960s.

Both new aircraft carriers are based at Portsmouth. HMS Queen Elizabeth is fully worked up after her Far East cruise. She could accommodate three or four squadrons of F 35s but half the aircraft and pilots would need to come from the US Marines. HMS Prince Of Wales is serving as flag ship – command and control – for NATO’s Maritime High Readiness Force. She has only just started flying trials, so far mostly helicopters. All six Daring class destroyers are alongside at Portsmouth and Birkenhead, awaiting a power improvement programme that will take until 2028 to refit them all. Two are ready to go to sea. Thus, our two carriers have barely enough F 35s for one and only two of their most modern escorts and only two nuclear submarines ready. There are older Type 23 destroyers but the RN will rely on the US Navy for its escorts and indeed most F 35 fighter squadrons. The original order for Darings was twelve.

Our destroyers and frigates number about 20 but at the time of the Falklands the navy had over 60. Today’s, are well armed for air and under water defence, none have anything for offense save a 4.5 inch naval gun. We could put this right and replace the firepower of tactical nukes by resuming development of the electro-magnetic rail gun. (The original one stands abandoned on a range in Scotland.) Rail guns fire solid shots, so no cordite bags taking up space in the magazines. They travel at hyper sonic speeds and can shoot over huge distances. I suspect one would have to bring back cruisers to fully exploit rail guns. Let’s just say that Vladimir Putin would NOT have all those tanks parked in neat rows if a British cruiser or two patrolled along with the submarines off Greece and Turkey.

So far, we have ordered 48 of the new stealth F 35 fighters. We are supposed to order 138 for RN and RAF squadrons. Italy is a partner in the programme, makes the wings and has ordered 90 aircraft. Finland, population a few millions, has just ordered 64 aircraft. Our two aircraft carriers could take 36 each and have room for a US Marine Corps squadron in emergency. Bear in mind that the RAF has nine fast jet combat squadrons. When the Berlin wall came down the RAF had forty squadrons of fast jets including V bombers.

We have forward positioned a squadron of Typhoon fighters in Romania. Our team of trainers – for the 2000 anti-tank missiles we supplied – have been withdrawn after completing their task. What happens if Putin invades Ukraine, China attacks Taiwan ( makers of most of the top quality microchips for everyone ) and helps Argentina attack the Falklands?

When we come to Russia we see that an invasion would be a huge gamble. The 130,000 soldiers surrounding Ukraine is larger than our regular army (89,000) our army but perhaps as much as 60% of Putin’s combat troops. Judging by Joe Biden’s latest figures Putin may have recalled some of Russia’s 2 million reserves.

Putin’s reforms made the Russian Army professional and smaller – in their latest edition of the Military Balance ,the International Institute for Strategic Studies breaks up the 900,000 wearing uniform as follows –

Putin has stuck to the Soviet custom of splitting up the armed forces to reduce the risk of a military coup!

Defense Secretary, Ben Wallace, told Forces that Putin may have 60% of his field army, combat units, on the frontier of Ukraine. That a big gamble and if it goes wrong, Putin won’t last long.

Maybe Boris as Houdini should have some tactical input?!

Russia’s GDP is less than Italy for the geographically largest country on earth and one tenth of China’s. Putin spends 4.4% of Russian GDP on defence compared with Germany’s 1.2% and the UK’s 2%.

Russia’s navy has 350 ships and 60 submarines but they’re split into four fleets. The Black Sea Fleet has 40 ships and 8 old diesel submarines plus the landing ships from the Baltic that arrived last week. Russia’s air force has 4000 aircraft of which about 20 are bombers, 1500 fighters and about 75 large transport aircraft. Again, they are dispersed across the largest country of all. Russia’ s army claims to have several thousand tanks, but international sources estimate 3,000 main battle tanks, The artillery is much more up to date and cutting edge as regards electronics, cyber warfare and drones.

Those seventy battle groups we hear about on the news are a battalion of infantry each with scouting troops mounted in armoured personnel carriers, supported by a dozen tanks and backed by three battalions of artillery. They are strong in artillery but otherwise thin on the ground. If they were to attack an American Armoured Brigade Team, the Russians would have to do ten times as much damage as the Americans would to knock out the Russians. If the Russian staff have miscalculated Putin could lose most of his Army with its equipment. Body bags don’t go down well even in controlled media Russia.

Putin and the EU have quite a lot in common. The last thing Putin wants next door to Russia is a successful, democratic Ukraine. The EU will move heaven and earth to lock us into their empire and dread a successful British Isles that freed themselves through a mass democratic vote.

The Defence Secretary and Chief of the Defence Staff may make their best contribution to the present crisis by persuading the Russians that we don’t need to send troops to Ukraine – they have plenty already – they will fight for years and we will supply them with the long-range fire they lack, and anything else they need, for as long as it takes.

Ukraine has an army with 200,000 combat troops and 900,000 reserves They have 858 Russian main battle tanks and about 1800 artillery pieces with some heavy self-propelled big guns. Artillery duels are fought with electronics that find the enemy’s guns before they find yours. GPS systems direct the rounds onto the target – the main reason why we can’t trust our young people’s lives to Galileo. The on/off switch is in Brussels.

Putin’s interest in grabbing Ukraine includes its vast wheat fields, the grain store for the Near East, particularly Syria and Lebanon. To gain control of those golden fields would give him a lever as powerful as gas does across Europe. On the other hand, maybe Putin is on the level when he says he doesn’t plan to invade Ukraine. Maybe he’s a smokescreen, distracting the White House from Taiwan. Maybe he’s proved to the Ukraine that they can’t rely on Germany and France. In which case he declares a victory and pulls back. Hoping that the Russian people will swallow his story. One does wonder if the idea is to show the American voters – rather than Ukrainian voters – that their NATO allies on this side of the Atlantic are a bunch of freeloaders. That will get the Americans back across the Atlantic without firing a shot.