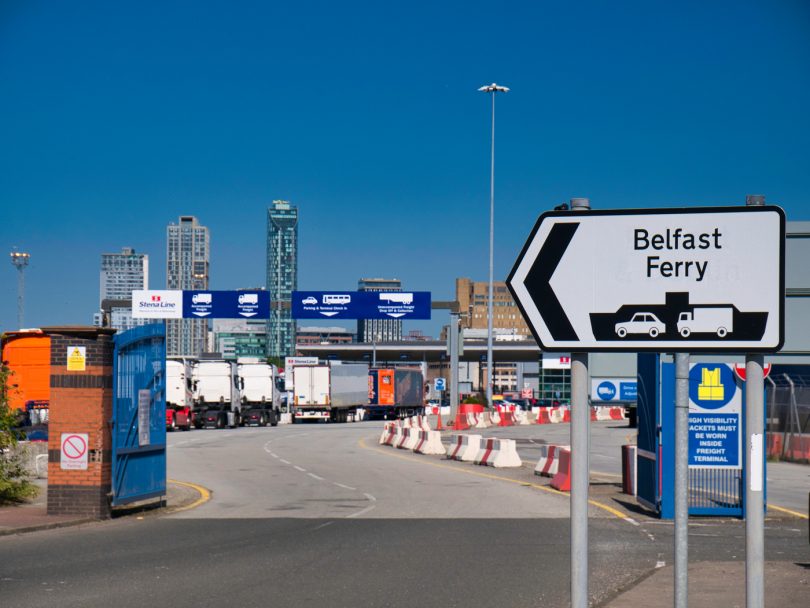 In recent weeks, the EU, Irish politicians, parts of the media and some business organisations have started to claim that the Northern Ireland (NI) protocol, rather than being economically damaging for the province, is actually positive. These claims should not be taken seriously. They are based on, at best, misleading use of the available data and are completely at odds with serious economic analysis.

In this article, we first examine some of the specific recent claims about Northern Ireland’s economic performance under the protocol and then review the serious evidence about the protocol’s longer-term economic impact.

One recent claim is that Northern Ireland’s GDP has held up better than that of the rest of the UK with the protocol being the reason for this. This claim relates to the UK’s regional gross value added data. As this data is experimental, we should be wary about reading too much into it, especially when regional variations are modest. But, in fact, it does not in any case support the claims that Northern Ireland has outperformed the UK due to the protocol. 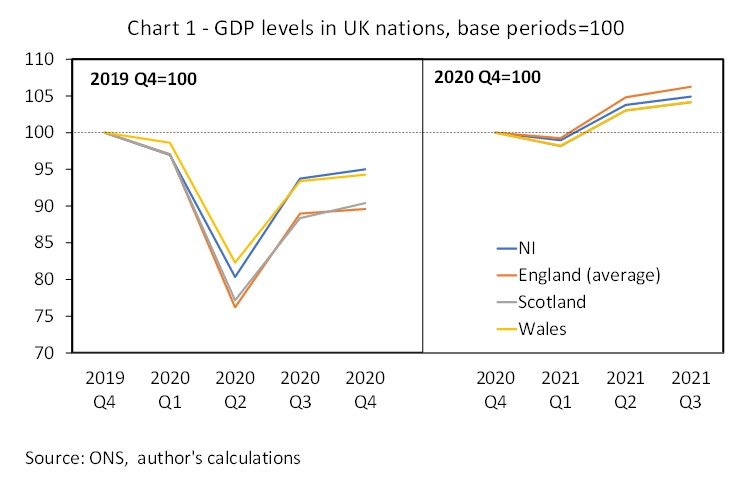 If we look at 2021, when the protocol was actually operating, we see a different picture. Northern Ireland’s economy has grown a bit faster than the economies of Scotland and Wales since Q4 2020, but somewhat slower than that in England (see Chart 1). Indeed, Northern Ireland’s economy has grown more slowly than every English region other than the north east of England (Chart 2). So, there is no evidence from this data that the protocol has caused economic outperformance in Northern Ireland since it was put in place in 2021. 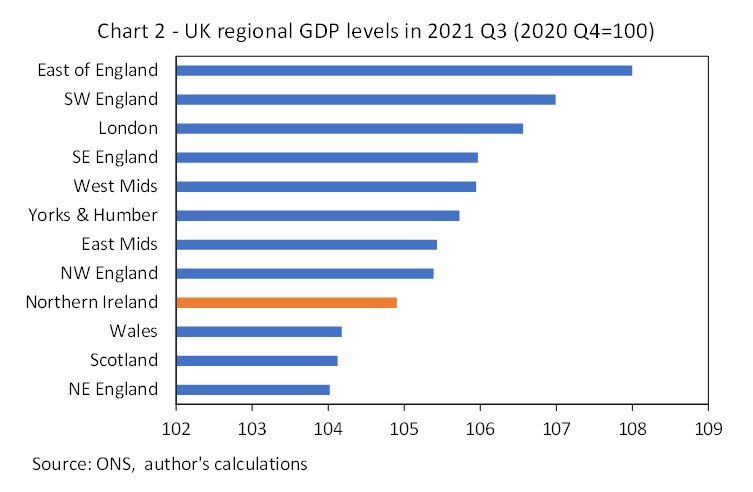 Another recent claim alleges Northern Ireland’s trade performance under the protocol has been more resilient than that of the UK as a whole. The available data on this area is even less precise than on regional GDP and only runs to Q2 of 2021, but again what data we do have does not support the claim. 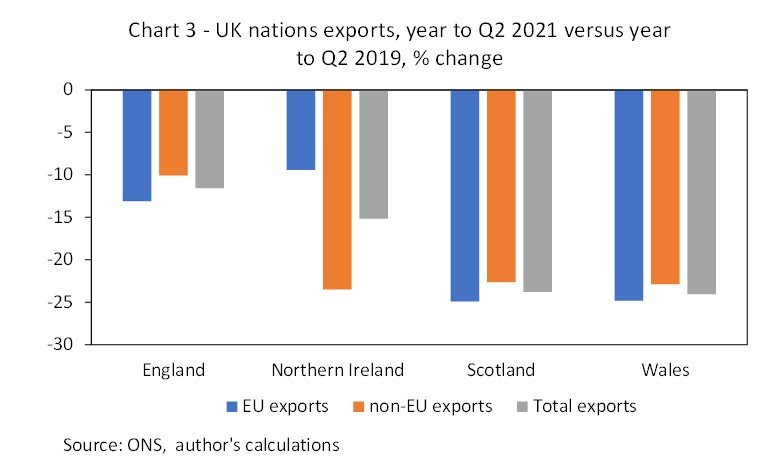 In the year to Q2 2021, Northern Ireland’s total exports fell by 15% compared to the year to Q2 2019 (comparisons with 2020 are unhelpful due to pandemic-related distortions). This is better than in Scotland and Wales but worse than for England where the fall was 12%.

It is true that Northern Ireland exports to the EU held up better than for all the other UK nations. But the difference in performance versus England’s was not large (-9% versus -13%) and given the large-scale re-routing of trade via Northern Ireland that has occurred this year due to the protocol and the UK’s exit from the EU customs union and single market, we should be very wary of reading too much into this. In any case, Northern Ireland’s poor performance in terms of non-EU exports overrides this modest recorded outperformance in exports to the EU (see Chart 3).

Modelling of Northern Ireland’s economic performance under the protocol

Until recently, serious comprehensive modelling of the impact of the protocol on the Northern Ireland economy was very scant (in sharp contrast to the abundance of studies on the impact of Brexit on the UK as a whole). But this is no longer the case, with a useful recent effort by Duparc-Portier and Figus from the University of Strathclyde filling the gap.

This modelling uses a computable general equilibrium (CGE) model that is widely used for these kinds of analyses. This approach has drawbacks but does have the advantage of teasing out all the various channels by which the protocol might affect the Northern Ireland economy; not just the first-round effect of higher trade costs between GB and Northern Ireland but also the extent of trade diversion and knock-on impacts via employment, wages, investment.

The assumptions made by the modellers look broadly reasonable. In particular, they assume non-tariff barriers to goods exports from GB to Northern Ireland and on services exports from Northern Ireland to the EU of 8-9% of trade values. This is in the middle of estimates previously made by the UK government. Importantly, they also model a fully implemented protocol – where the current grace periods covering much of agri-food trade, medicines, and some other areas – are not present. This is critical because these grace periods have greatly softened the protocol’s impact so far. 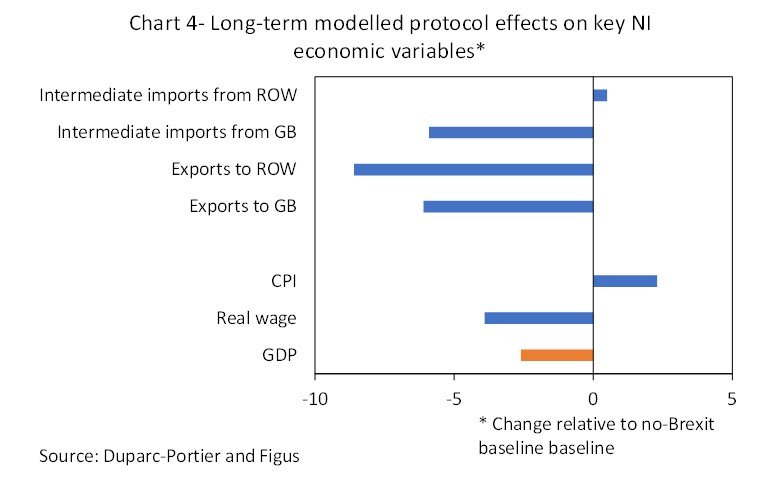 The headline results from this study on key economic aggregates for Northern Ireland make for sobering reading. GDP falls by 2.6% in the long term and real wages by almost 4%, with consumer prices rising by nearly 3%. Northern Ireland’s GDP per household is around £65,000 (£48.6 billion divided by 750,000 households). So, a calculation similar to that the UK Treasury did in 2016 for its estimates of the impact of Brexit implies losses from the protocol of £1,620 per year per household in Northern Ireland. This is a large impact, even with the fairly conservative assumptions used by the Strathclyde modellers (which contrast dramatically with the extreme ones used by the Treasury in its Brexit study).

The results of the study also do not support the idea that Northern Ireland would benefit in trade terms from the protocol. There is a considerable drop of around 6% in NI intermediate goods imports from GB, while intermediate imports from the rest of the world (ROW) rise 0.5%. This indicates considerable trade diversion. But importantly, Northern Ireland exports do badly. Sales to GB fall by 6% and sales to the rest of the world also decline, by almost 9% (see Chart 4).

It is important to understand why these impacts occur. The model introduces considerable non-tariff barriers to exports from GB to NI. But because NI is heavily dependent on inputs from GB which are then embodied in products sold both back to GB and the rest of the world, NI’s exports lose a considerable amount of competitiveness in all markets and decline in value. NISRA data show key NI manufacturing sectors rely on GB for 33-67% of their inputs.

So, the protocol’s key feature, keeping an open border for goods trade between NI and the Republic of Ireland, does not come close to offsetting the massive negative effect of hampering trade between NI and GB with new barriers. This should in no way be a surprising outcome. Northern Ireland goods exports to the EU are about £5.4 billion or 11% of NI GDP, while imports from GB are £11 billion or 23% of NI GDP (Chart 5). 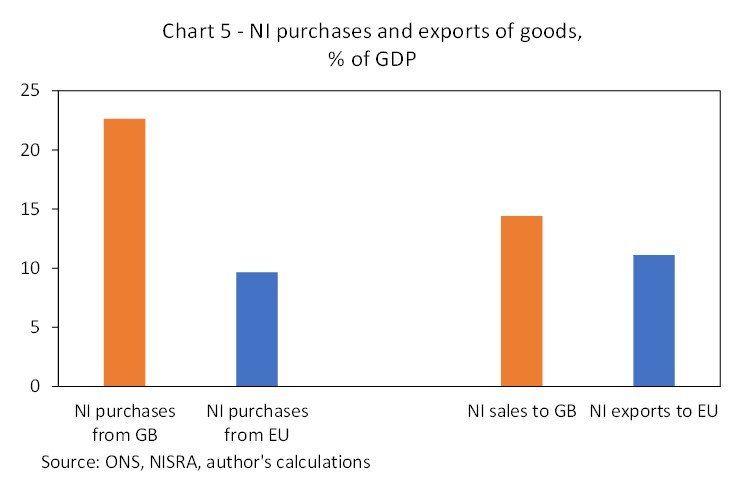 The protocol was always going to be damaging given this imbalance. In principle, the problem could be got around if NI could source equally cheap and abundant inputs from non-GB sources, but as the study notes, this is extremely unlikely. Indeed, it is arguable that Northern Ireland’s position as a small and peripheral region makes replacing relatively cheap GB inputs much harder than replacing EU inputs post-Brexit would be for a large economy like the UK. Evidence that grocery prices in the Republic of Ireland are 15-20% higher than in NI indicates the potential scale of the problem in just one (important) sector.

How plausible are the results of the Strathclyde study? There is a case for arguing that the non-tariff barrier estimates are too high – our own preferred estimates for such barriers between the UK and the EU post-Brexit would be a little lower. But even with average barriers of 3-5% of trade values, NI GDP would still fall by 1.5%. Moreover, it is quite likely that non-tariff barriers under a fully implemented protocol (i.e. without grace periods) would be higher in certain sectors such agri-food than used in the Strathclyde study.

The balance of risk, though, points to costs to NI from the protocol being, if anything, higher than in the Strathclyde study. First, the modelling approach looks at long-term results. It is possible that the large shock created by a fully implemented protocol might cause bigger output and employment losses in the short term as businesses and consumers adjust.

Second, the headline results of the study do not reflect the fact that some goods moving from GB to NI under the protocol are in fact subject to tariffs (such as those not having sufficient UK-produced context). This effect would be relatively small, as an alternative scenario in the study shows.

Third, the study does not incorporate any ‘dynamic’ effects such as on productivity. We are generally sceptical of such effects, but there is a case for considering them in the Northern Ireland context. Cutting off a small peripheral region from the efficient supply chains of a large mainland is unlikely to be good for productivity.

Finally, it is possible that the costs to Northern Ireland of the protocol will rise over time. The non-tariff barrier estimates only relate to current barriers between the UK and the EU. But if the UK diverges from the EU over time in the regulatory sphere, these barriers will rise and NI – still held in the EU’s regulatory sphere for goods – will be caught by this. Note this does not just refer to UK-led divergence. The EU’s (protectionist) proposed carbon border tax and deforestation trade proposals could also increase barriers to trade between GB and NI.

In the same context, it is important to note that under the protocol, NI will also not benefit fully from any new trade deals done by the UK with third countries. Where the difference between the EU tariff and the UK tariff on a good from a third country is more than 3%, this good cannot be sent tariff-free to NI. So, one of the crucial long-term benefits of Brexit – the ability to source cheaper goods (especially foodstuffs) from non-EU economies – does not apply to NI under the protocol. Again, this could imply long-term competitiveness losses for NI producers versus GB firms able to source cheaper inputs.

Claims that Northern Ireland has outperformed GB in 2021 due to the protocol are not supported by a proper reading of the available evidence. Over the longer term, the evidence from recent modelling contradicts the idea that Northern Ireland enjoys a ‘best of both worlds’ position due to the protocol. Imposing heavy barriers to imports from GB causes inefficient trade diversion, a sharp fall in NI living standards and undermines the export competitiveness of NI firms.

This is an inevitable result of penalising the much larger trade connection with GB in order to maintain the existing level of barriers to the much smaller level of goods trade with the EU. The supposed benefits under the protocol of ‘dual access’ to GB and EU markets are a mirage – some individual firms may benefit but NI as a whole loses. The only way this calculus might change is if there was a huge surge of FDI into NI to build new export capacity using an EU supply chain. There is no sign of this happening and the business case for it is anyway questionable – NI is not well placed geographically to serve either the GB or core EU markets.

The evidence thus overwhelmingly points to the protocol having a large negative impact on the NI economy. The modelling work suggests about 80% of the negative effects come from higher costs of imports to NI from GB, so the UK government – if it wants to prevent a sharp deterioration in economic conditions in NI, and potential social and political problems associated with that – needs to prioritise removing or at least minimising the effect of the new trade barriers that have been created in the Irish Sea.