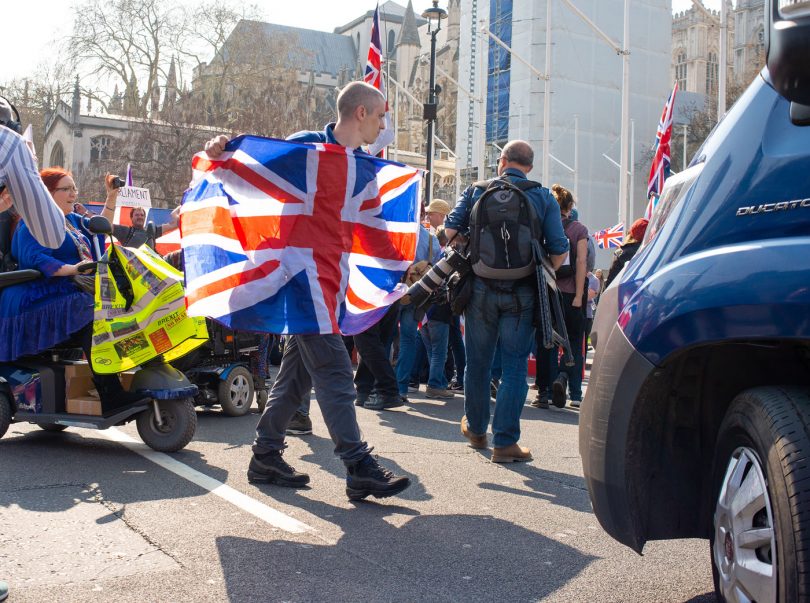 The Remainers’ revolt is one of the most influential concepts in the number-crunching world of British politics. Some Conservative MPs fear that moving towards a hard Brexit could lose them key constituencies in the south of England. Labour is under pressure from its members to back a second referendum, lest they face a Remain backlash at the ballot box. But if we look at key marginals, we find that it is not the Remainers who are the real threat to two main parties. It’s the Leavers.

The headline figures of the local elections seemed to imply the potency of this Remainers’ revolt. The Liberal Democrats won 704 councillors, and the Greens doubled their councillors across the country. In the EU elections, the Brexit Party were the clear winners, but the combination of votes for the Greens, Lib Dems, and Change UK roughly matched those of the Brexit Party and UKIP. For the Labour Party, word that the party had lost Islington to the Lib Dems and Bristol to the Greens reinforced this perceived phenomenon. But has the potential of a disruptive Remainer earthquake been overstated?

It is undeniable that in the past few months there has been a surge in support for pro-second referendum parties like the Liberal Democrats and Greens. In the 2017 general election, both of these parties were ardently pro-Remain and performed disastrously. The Liberal Democrats received their lowest share of the vote since Jo Grimond was Liberal leader in 1959. The Greens’ support shrunk in half, leaving them with only about 800 votes per constituency on average. In contrast, Labour and Conservatives both vowed to implement the ‘Leave’ result and received their highest combined vote share since before Britain joined the Common Market in 1973.

The recent success of the Greens and Lib Dems make the general election of two years ago feel very far away. But national figures can obscure the more granular story of political change in the country. Gone are the days of uniform swings, whereby psephologists like Nuffield College’s David Butler could use his swing-o-meter to apply a common swing in every constituency and call an election accurately after only a handful of results.

Shifts to the Greens and Lib Dems might not be uniform. They might be happening disproportionately in seats where Labour already commands huge majorities and, therefore, are less consequential in respect of a general election outcome. A shift from Labour to Greens in Bristol West might not be desirable for Labour, but Thangham Debbonaire’s 37,000-vote majority is more likely to withstand any swing away from Labour than Gloria De Piero’s 441 majority in Ashfield.

Therefore, commentators ought to ask whether the ‘Remainer revolt’ is occurring in the places which matter most: marginal Labour and Conservative constituencies which hold the keys to Downing Street in the balance.

The local elections provide a way to conduct more granular analysis on national headline figures. The 2019 European Parliament results were announced by council area, which are often too heterogeneous for us to draw strong conclusions about shifts in voting patterns. Smaller council wards, however, can give finer detail about political changes in the country.

The 2016 EU election results were reported by local authority, but thanks to the work of the BBC’s Martin Rosenbaum, some councils made ward-level data of EU referendum voting publicly available. Using these data, I analysed the relationship between a ward’s support for Brexit in 2016 and shifts in party support at local elections over the last year.

Wishing to focus on the marginal seats that will decide the next government, I analysed wards in the constituencies won by Labour or the Conservatives in the last general election by fewer than 5,000 votes. The constituencies which had sufficient ward-level data for this analysis were Dudley North, Grimsby, Keighley, Lincoln, Norwich North, Peterborough, Portsmouth South, Shipley, Wakefield, Walsall North, Wolverhampton North East, Wolverhampton South West, and Worcester.

I found evidence of declining support for both of the main parties (Figure 1). Since May 2018, the Tory vote in the council wards in my sample declined on average by 4.5 percentage points. The Labour vote declined on average by 5.6 percentage points. What is notable is that this decline is slightly less pronounced than the overall decline in their national vote share. This implies that the two main parties are probably holding up their vote better in the marginal constituencies than we might be led to believe. 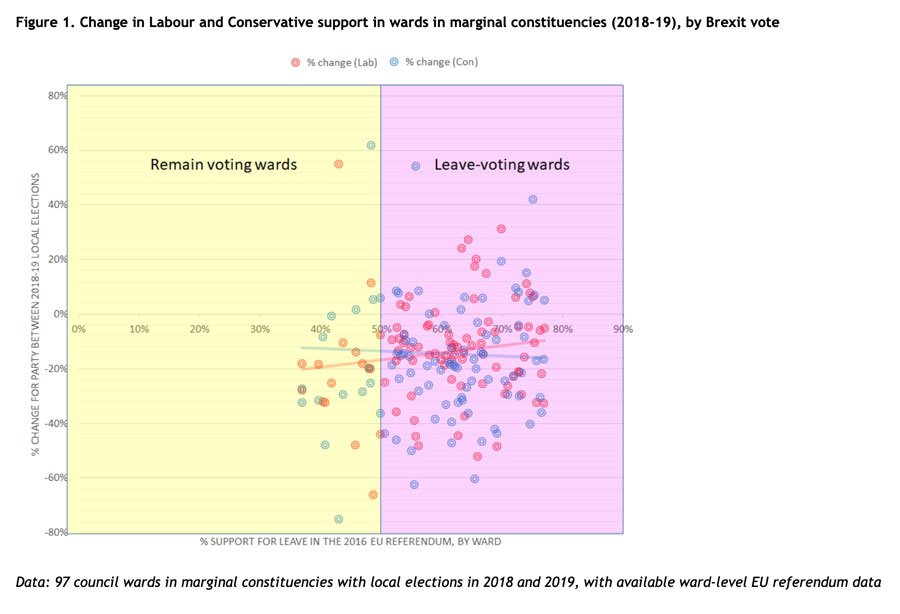 For the Greens and Lib Dems, there was an increase for these ardent, pro-Remain parties, but it was less dramatic than the national figures might suggest. The Lib Dems saw only an average 1.3 percentage point increase in their vote share; the Greens increased theirs, on average, by 6.4 percentage points.

Obscured in the national data because of how few candidates they stood in the local elections were the futures of UKIP. The party did not have the capacity to stand candidates in most council wards, and the Brexit Party was too new to stand candidates. So, the overall national vote share for no-deal parties (4.5%) seemed quite low.

Yet, with a more detailed focus, UKIP’s success in the local elections presaged the Brexit Party’s success three weeks later. In the 59 wards in my sample in which they stood a candidate, UKIP saw, on average, a 6.5 percent increase in its vote share. In fact, in these marginal constituencies, UKIP’s average percentage point increase in its vote share actually outpaced that of either the Lib Dems and Greens.

As for the correlation between Brexit support in a ward and change in support for a given party, the pattern was quite weak. Overall, Brexit support was not strongly correlated with change in party support between 2018 and 2019 local elections, especially for Labour and the Conservatives.

For the Lib Dems and Greens, unsurprisingly, the more pro-Remain the ward, the more strongly these parties increased their vote share. However, it ought to be said that, especially for the Greens, their vote share improved across the board, including in some strongly pro-Leave areas. There were some council wards with at least 70% support for Brexit which saw the Greens improve from their result last year.

The Lib Dems, too, improved their vote share in many pro-Leave wards. We, therefore, ought to be cautious about interpreting a vote for a Liberal Democratic councillor as a clear expression of a pro-second referendum preference. It is quite possible that people were not guided by Brexit as their main factor in casting their vote. While Brexit is a highly salient issue, there may be overriding local concerns which explain this result.

UKIP tended to stand candidates in leave-voting wards. In nearly all of these, it increased its vote share from last year’s local elections. In some cases, the UKIP vote doubled or even trebled. Corresponding increases cannot be found for the Lib Dems or Greens in Remain-voting wards in the sample (Figure 2). 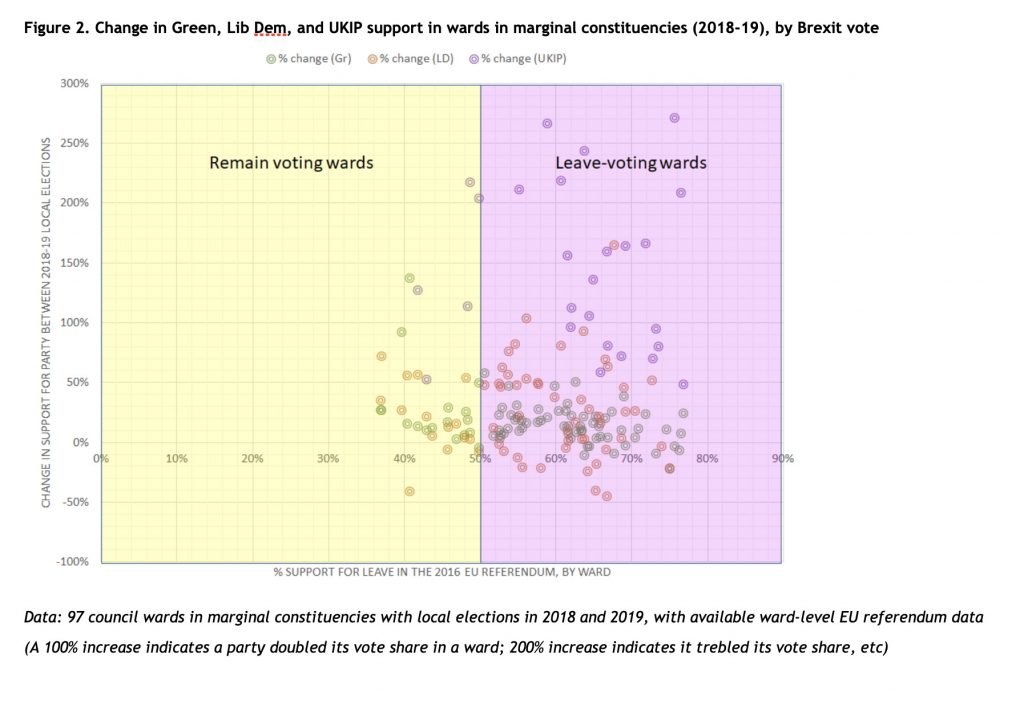 While neither Labour nor the Conservatives can afford to write off Remain voters, they ought not forget that the voters who matter most under Britain’s first-past-the-post electoral system are not behaving precisely as national, headline narratives imply. Pro-Brexit insurgents are doing better than pro-Remain insurgents, and in stronger connection to how strongly a community voted to Leave the European Union. It is not the Remainers who are punishing the two main parties most in the marginal the most. It’s the Leavers.

Richard Johnson is a Lecturer in Politics at Lancaster University.