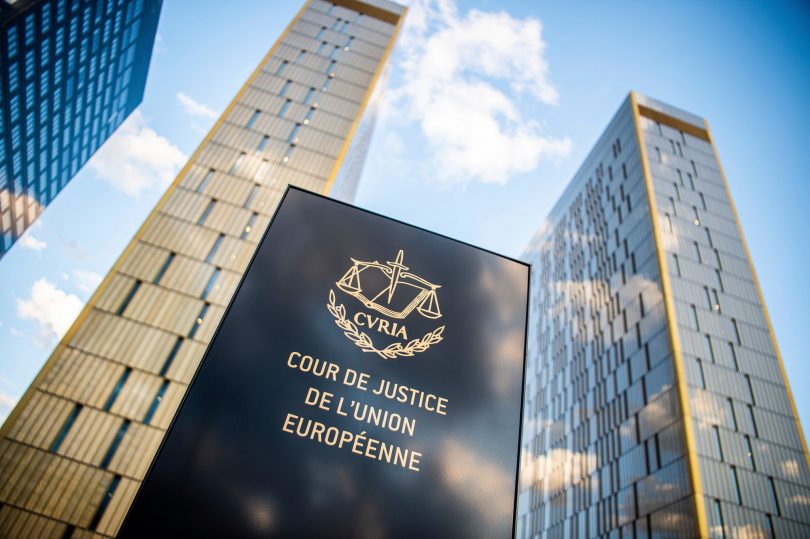 The European Union claims to be based strictly on law, and its Court of Justice claims the supreme and exclusive right to decide what that law is. But is it doing justice even in its own affairs, and do its members inspire confidence in its independence and integrity?

The fragility of the EU’s commitment to the rule of law has been further exposed by the case of the dismissal of Eleanor Sharpston QC, Advocate General of the Court of Justice of the European Union [CJEU] and one of the UK’s most distinguished lawyers. She has had a long involvement with the court, culminating in her appointment as an AG in 2006, the first British woman to hold that post. Earlier this year she was removed from her post both by the Court itself and by the EU and, as a matter of principle, is currently taking legal action against both institutions over the illegality of the move.

Sharpston’s colleague, the UK Judge on the court, Christopher Vajda, was removed on Brexit Day, but that was lawful: if the UK is not a member state, it does not have a judge on the court. The position of Advocates General however is different. The post is not attached to a member state. They are appointed for a fixed period of 6 years “by common accord of the governments of the member states” and may be renewed. (Art 19(2) TEU). They may be removed only by resignation or as a consequence of no longer meeting relevant Treaty conditions or severe misconduct, which is to be determined by the Court itself. So what happened?

The EU’s 27 member states issued a declaration on 29 January asserting that Sharpston’s mandate would terminate two days later. On 31 January the court’s president, Koen Lenaerts, wrote a letter to the Council of the EU declaring a vacancy from 1 February and asking member states to nominate a new advocate general to Sharpston’s post. Greece is next in line for the job. There is no indication in the notorious art 50 of the Lisbon Treaty (perhaps no other short clause has caused so much grief, expense and confusion – it’s ripe for re-drafting) to support this, and there is no clarity in the Withdrawal Agreement about it. You would have thought that human rights lawyers, many of whom are amongst the most staunch Remainers, would be up in arms about this arbitrary treatment of a fellow lawyer. There has been nothing but silence, with the single exception of the uncovering of the story by Joshua Rozenberg.

This is not the only transgression and failure of the court when it comes to the rule of law. True, it has condemned the Polish government’s attempt to muzzle its judges. The Polish government established a new disciplinary chamber of the Polish Supreme Court, which has a politically selected membership and extraordinary powers to prosecute judges who oppose the government. However, the CJEU’s judgment on this seems likely to be disregarded by Poland, which has disputed the power of the court in this area. But the CJEU is itself hardly setting an example. Its very composition militates against the sort of independence of the judiciary that we expect in this country and which is intrinsic to the rule of law. The European judges are nominated by their governments for a term of 6 years, renewable. Given the salaries and the prestige, what judge would not want to be renominated?

Renewal possibilities cannot but cast a shadow over the perception of impartiality of any judge, and the UK would not find such a system acceptable for the High Court or the Supreme Court judges. And the salaries? Currently at least 275,000 euros, with a monthly entertainment allowance, a household allowance, dependent child allowances and an education allowance, a residence allowance, an installation allowance on taking up the post and a resettlement allowance on leaving it, reimbursement of travelling expenses incurred by the judge and his/her family and reimbursement of the cost of removal of personal effects and furniture and insurance, a monthly transitional allowance weighted upon the basis of years of service, a pension for life payable at 65, which may be drawn from 60 if retired, travel and subsistence allowances, sickness, occupational disease, industrial accident and birth and death benefits and survivors’ benefits for death in service. Currently many of the judges do not have the domestic judicial experience that we would expect of nominees to our superior courts in this country but are law professors, civil servants, ministers, ambassadors or have a combination of those experiences.

I thought of this salary munificence when the CJEU in 2018 upheld the decision of the European parliament that MEPs do not have to provide invoices and receipts for their constituency office costs, or provide the public with details of travel expenses or their monthly (then) 4,416 euro general expense allowance (CasesT-639/15 toT-666/15).

The appointment, perceived independence and behaviour of the justices of the CJEU are at the very least open to serious question. They would not be tolerated within our own system. Every British lawyer and every defender of the EU should be shouting from the rooftops about the case of Eleanor Sharpston. If you can sack a member of the court, judicial independence is meaningless.

Ruth Deech is a Crossbench peer, former chair of the Human Fertilisation and Embryology Authority, and former Principal of St Anne’s College, University of Oxford.