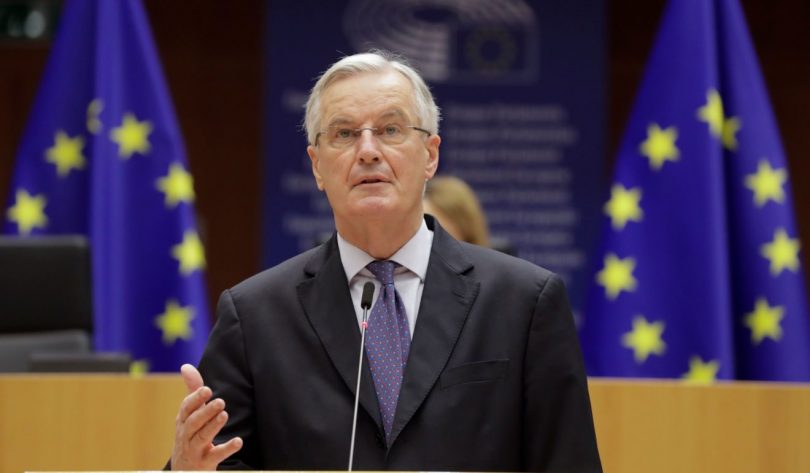 We shall soon be able to read Michel Barnier’s ‘secret Brexit diary’ in English. It is an important document, but the least ‘secret’ diary one could imagine

Michel Barnier’s My Secret Brexit Diary is to be published by the Polity Press at the end of September.  It is good to have an English translation (and a fluent and readable one) of what is without doubt an important historical document.  No one seriously interested in the long, chaotic and by the end exhausting saga of the Brexit negotiations can ignore it.  It will surely appear in the footnotes of many a book and thesis for the indefinite future.

A historical document, then.  But precisely what sort of document?  Is it really a secret diary, the sort jotted down in the middle of tedious meetings (as Tony Benn used to do in Cabinet) or hastily written up over a late-night snifter after an exhausting day of wrangling over fish?  It certainly doesn’t read like that to me.  Admittedly, it does go through the motions, telling us that M. Barnier met so-and-so on a plane, what his desk was like, which rooms meetings took place in, and even occasionally mentioning family occasions.  It is certainly presented in the form of a diary with entries for certain days.  But the whole seems to have been carefully collated and polished to give the official Barnier account.  It is, in short, the least secret diary imaginable.  I noticed only one witticism: Mark Rutte remarking that the House of Commons voting against a No Deal was like the Titanic voting to move the iceberg.

This is Michel Barnier as he wishes the world to see him – nothing unusual there for a politician’s diary, you might say.  He comes across as a giant among (British) pygmies: always calm and courteous, always in command of the situation, always consistent, always reasonable, resolved ‘to avoid any form of aggression, emotion or passion.’  Just the man for the job and (perhaps we are meant to conclude) just the man for an even bigger job in future.  Perhaps he really was like this.  Perhaps, as Queen Victoria said of Mr Gladstone, he does address his interlocutors as if they were a public meeting.  If so, he was, to an almost caricatural degree, the epitome of a French negotiator: the French do not see negotiation as bargaining, but carrying out a logical pre-determined programme; they insist on the sanctity of texts; they do not try to understand the other side’s point of view; they do not seek a mutually acceptable compromise; they do not think too far ahead into the future relationship.  This is the impression that Barnier’s diary gives over and over again.  He is proud of it: it is the intellectually and morally superior position.  As he frequently repeats as a kind of mantra, it was Britain that decided to leave the EU, and so the EU has no responsibility for finding solutions to ensuing problems.

Of course, there is politics too.  As he notes, French President François Hollande told him early on, ‘there must be a price’ for Britain to pay. No win-win agreement, then.  But then, as a handbook to negotiating with the French published just before Brexit by the French Chamber of Commerce pointed out, this is standard practice: while the British are ‘proponents of “win-win”, and will compromise in an effort to build long term relationships that benefit both parties’, the French are ‘proponents of “I win-you-lose”, appearing not to care if it risks the breakdown of the relationship.’  Indeed, one of the things that seems to have rattled the imperturbable Barnier was when the British under David Frost tried to bargain.  He regarded this as improper, as if the haggling of an Arab souk were suddenly being tried in Fortnum & Masons.

If this diary is highly discreet, it is not unrevealing.  One obvious thing it reveals—no surprise to any of us—is how hopeless the British side was from 2016 until 2019.  They were constantly on the retreat, and Barnier constantly on the attack.  The British were intellectually and morally defeated from the start, and when Theresa May or any of her colleagues tried to make a stand, they were quickly forced to back down.  British officials were eager to see sense, as Barnier understood it.  He was particularly fond of Oliver Robbins (who advocated a ‘Turkey plus’ relationship), and claims to have developed respect for Theresa May for her determination in trying to push through the agreement the EU wanted.  He also admired John Bercow’s ‘authority and firmness’, and he appreciated Tony Blair’s ‘charisma’ when he came to hold out the prospect of a second referendum.  Of course, he approved of the various Remainer politicians who queued up to see him.  He seems to have been a regular and approving reader of the Financial Times, which confirmed his views.

If Barnier had likes, another thing the diaries reveal is his contempt, and personal dislike, for his adversaries: here the mask occasionally slips.  Even poor Jeremy Hunt is icily dismissed as ‘caricatural’.  Things got a lot worse for Barnier after the 2019 general election and the appointment of David Frost as British negotiator.  He realised that things had changed (he complains of Frost’s ‘rather arrogant tone’, which seems the pot calling the kettle black) and the best he could manage was a ‘cold and professional’ relationship.  He was seemingly unnerved by Frost’s ‘audacious’ speech in Brussels in February 2020, that showed that here was a negotiator with a positive and reasoned commitment for Brexit – a speech he cites at some length.  The British negotiators now were less predictable and less amenable, changing tactics, doing the unexpected, making demands, imposing deadlines, even threatening to break off negotiations.  This seems to have got under his skin, as if the British were doing something unethical.  But the British could never, of course, start with a clean slate.

Ireland was always the main stumbling block, as it remains.  Here Barnier is unwaveringly self-righteous.  The EU, he claims, brought about peace in Ireland, and his main aim was to safeguard that and the sanctity of the ‘single market’.  Readers of Briefings for Britain will know how h0llow that sounds to us.  The Barnier mask slips again when he refers icily to the Commission’s precipitate use of Article 16 of the Northern Ireland Protocol to stop exports of vaccine as ‘a mistake’ which was ‘in direct contradiction to our efforts’.  Efforts, of course, to maintain a stance of moral superiority over the Irish question, and refuse all practical attempts to solve it.

Barnier seems to have made little attempt to understand what was really at stake for Britain during the Brexit period.  ‘I still don’t understand what the point of it is’, he can still write in January 2021.  Was he really so out of touch, or is this a pose?  Who knows?  But he sometimes writes as if visiting from another planet.  Perhaps this is just Planet Brussels.  His starting point and end point is that ‘the Europe of today is far more pragmatic and efficient than that of the 1980s’; that Brexit is a failure ‘from which we must try to draw some lessons’ (unclear which); and that Britain’s actions are simply irrational and dishonest, and will bring down merited consequences on our heads.