For those of you who have not seen what our dear friend Michel has been getting up to lately, M. Barnier appears to have suddenly come over all Eurosceptic.

This week we’d like everyone to say a special hello to our newest subscriber: one M. Barnier, from Paris. We’re delighted that you’ve decided to join us at last, Michel, and apologise for some (but certainly not all) of our less-than-enthusiastic comments about you in past newsletters. Bienvenue, Monsieur! 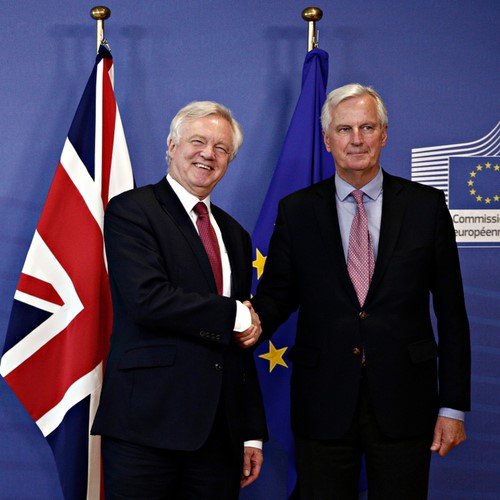 Best of friends after all?

For those of you who have not seen what our dear friend Michel has been getting up to lately, M. Barnier appears to have suddenly come over all Eurosceptic. In a speech in Nimes this week, the EU’s former Brexit negotiator called for France to “regain” its legal sovereignty and “no longer be subject to the judgments of the European Court of Justice (ECJ) or the European Court of Human Rights”. At last, M. Barnier has seen the light! Or perhaps just the polls, which show him trailing in the five-way race to become the next president of France. In any case, Michel, we are sure you’ll find a lot to interest you on the BfB website.

In other news, the amazing Emma Raducanu has helped Britain end the summer on a magnificent high. Alas, the same cannot be said of the UK government, which persists with its ill-conceived increase to National Insurance. The plan has been criticized across the media and we will be publishing our own analysis in the next week.  The plan increases the taxes of those at work (plus the retired a little bit) in order to protect the inheritances of those whose parents require social care in old age. Hardly the way to build a fair and cohesive society in post Brexit Britain.

Remainers continue to claim that UK food exports are performing disastrously. But their claims rely on misleading or outdated figures and ignore the recent trajectory of UK overseas food and drink sales.

“While some subsectors have seen a clear fall in sales, in June overall UK sales of food and drink to the EU were slightly above pre-pandemic levels.”

Pro-European voices have argued that the US is no longer reliable, and that the UK must deepen its foreign policy links with Europe – particularly France.  Yet this ignores fundamental structural problems and the lessons of past experience.   European members of NATO, with the exception of France, have historically been weak in intelligence, firepower and logistics capabilities.  Moreover, foreign policy is one of the areas where the EU’s internal differences emerge most starkly.

A few examples: Baltic states’ over-riding concern is security against Russia, yet Germany has just completed Nordstream 2.  Greece’s worries about Turkish violations of their international waters are ignored because other European countries fear that Erdogan will release a flood of migrants (as Lukashenko is currently doing in Belarus).  Commercial interests fret about antagonising China even as Bejing directly sanctions MEPs who criticise its repression.

Moreover, those who think that Britain can unite Europe from within in a common foreign policy forget that it has already been tried and failed.  Britain nominated the first EU high commissioner for foreign policy Catherine Ashdown in 2009, whose tenure achieved fairly little of substance.  Britain itself has Indo-Pacific interests due to the historic legacy of the Commonwealth which aren’t shared by EU nations and which would have to be abandoned in the pursuit of shared EU foreign policy aims.

What co-operation there has been (such as Franco-British intervention in Libya in 2011) has been largely bilateral and with France.  Bilateral defence links are indeed strong, and Emmanuel Macron is serious about enhancing joint European defence and intelligence capability.

But French efforts in this area, as they always have been, are about creating a European foreign policy in France’s image.  That programme has no space for an autonomous UK – indeed, as R. W. Johnson eloquently argued in 2017, it is partly directed against what French elites see as Anglosphere dominance.

If Macron truly wanted further Franco-British strategic co-operation he would use his influence in the EU to persuade Brussels to budge on other issues – such as the Northern Irish Protocol, the enforcement of border controls, equivalent status for the City, and so on – or give way on issues under his control like the Channel migrant issue.  That he has not speaks volumes.

With all that said, a note of optimism must be sounded.  A measure of co-ordination can be observed in the EU, as European governments (like the UK) have become more China-sceptic, though their co-operation has been detrimental for the UK in the obvious case of vaccine supplies.

Moreover, France’s agenda is obvious to other European countries, most of whom are less enthusiastic and retain bilateral ties to the UK.  When Macron condemned NATO as ‘brain-dead’ in 2018 he received significant criticism on the continent from Angela Merkel.  Indeed, promoting NATO co-operation may offer a workable alternative to those countries fearing US withdrawal from Europe but wary of French aims.

Unlike the EU, the organisation also possesses substantial experience and strong institutions, and its members have (gradually) been responding to calls to commit to its defence budget targets.  Overall, though some measure of European co-operation remains desirable, Britons should be clear-eyed about their partners’ limits – and wary of their potential agendas.

In the aftermath of the Afghanistan debacle, we’ve seen pro-European voices make two main lines of argument.  This piece will concentrate on the first – blaming the affair on pro-Brexit Foreign Secretary Dominic Raab, and to suggest the pro-European China hawk Tom Tugendhat replace him.

Yet is clear from the outset that there is little of substance that any other foreign secretary could have achieved in Raab’s place.  Raab is neither stupid nor lazy, as he is made out to be, and the failing in Afghanistan is not one of personal virtue.  For this reason alone Tom Tugendhat would have been no magic bullet (although in fairness to him he has brought up the issue of Afghan interpreters in previous years).

Rather, the failure to evacuate sooner reflects most poorly on Raab’s Foreign Office advisers.  As Brian Monteith writes in The Scotsman, the failure to evacuate interpreters who weren’t currently employed by the UK when our armed forces withdrew in 2014 was identified in a report published in May 2018.  Theresa May and her foreign secretaries (Boris Johnson until July; thereafter) took no action on this.

More widely, the civil service was ill-equipped to advise ministers how stable the Afghan government would actually be after the US withdrawal.  Despite UK forces being present for over a decade, the Foreign Office has done little to foster expertise in the area (according to insiders).

This reflects a wider civil service culture which emphasises all-round competence rather than deep area specialism.  This problem was highlighted by Dominic Cummings, but it seems unlikely that it will be addressed following his dismissal.  The civil service also retains a worrying belief in its own superiority, as its whose members think it legitimate to brief against elected officials (their direct superiors at that) with whom they disagree.

And most importantly, once the US committed to advancing the withdrawal timetable there was little that could be done by Britain or any other single developed nation.  Critics forget that the UK tried to put together a NATO coalition of the willing to provide support to the Afghan government, which collapsed in the face of impotence and indifference from potential allies.