Another painful week of negotiations, as the world saw exactly how an EU-conforming sausage is made: with threats of a trade war, inflexibility and a complete inability to compromise.

Another painful week of negotiations, as the world saw exactly how an EU-conforming sausage is made: with threats of a trade war, inflexibility and a complete inability to compromise. The ongoing crisis in the UK/EU negotiations on the Northern Ireland Protocol has been stoked by some difficult interactions at the G7 summit. Particular highlights have included Emmanuel Macron’s failure to grasp basic geography, with the bizarre claim that the UK and Northern Ireland are separate countries.

Northern Irish imports of British sausages are one of the many products that have been caught in the crossfire. The EU continues its dogmatic insistence that UK sausages cannot possibly meet EU standards unless the UK accepts full regulatory alignment, while refusing to countenance easily available, practical solutions which would protect their standards just as effectively. 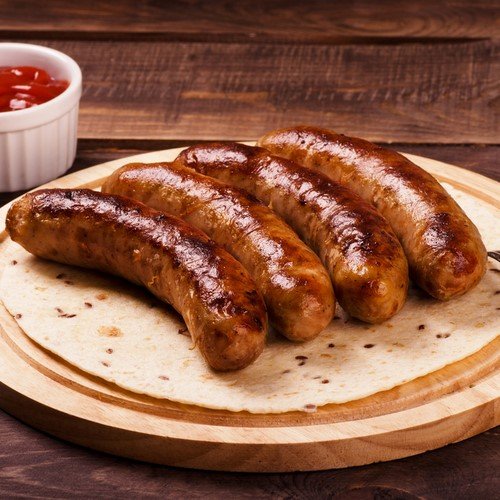 There are a range of alternative options available which would be more palatable for both sides. These might involve: a system based on equivalence (recognising that EU and UK regulatory standards are independent but equally effective); an expansion of the list of items considered ‘not a risk’ for import purposes (which UK sausages clearly are not); or a plan for mutual enforcement of standards (in which the UK and EU conduct their checks in parallel).

The EU try-on, on the other hand, is to persuade the UK to rewrite last January’s Trade and Cooperation Agreement (TCA) by permanently agreeing to current and future food and animal regulations across the entire UK. The EU have been expressing great irritation with David Frost and publicly calling for a return of the more pliable Michael Gove. This sort of complaint is a sign that Frost is doing something right. He has clearly seen EU intransigence coming and must have contingency plans. We will soon see what these are. 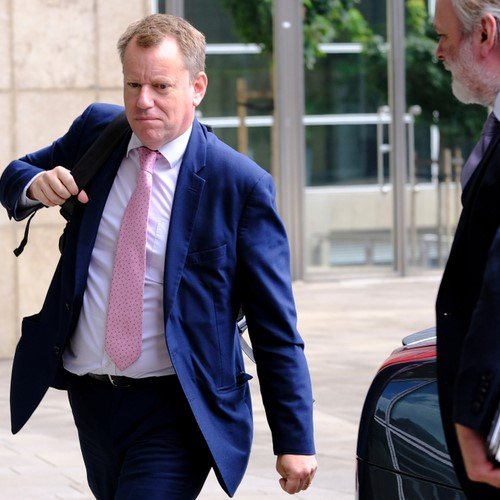 Lord Frost: who the EU are desperate to send packing

The dramatic demarche (serious diplomatic dressing down) from the USA over the NI Protocol also appeared to escalate the difficulties faced by Boris Johnson. Although the Times implied it was a recent event, our information is that it occurred two weeks ago and has been ignored by the PM and Lord Frost. The US appears to have rowed back, and some have surprisingly suggested that President Biden had not known of its existence. This would imply a greater level of chaos in US Government than we would ideally like to believe.

In other news, France, Italy and Germany are reportedly seeking bilateral post-Brexit agreements with the UK, having realised that cooperation with Britain is vital for their defence. As we have long predicted, there is a lot of scope for mini-deals between Britain and individual European nations to plug gaps in the Brexit deal. The nations of Europe are recognising the need for pragmatism, even though the EU is not.

Professor of International Economic Law, David Collins, submits the idea of ‘mutual enforcement’ on cross-border Irish trade to rigorous scrutiny. He concludes that ‘Mutual Recognition has not been convincingly disproven as a feasible alternative to a border in the Irish Sea or a hard land border on the island of Ireland’.

“Claims that full regulatory alignment is the only solution are similarly narrow-minded and unambitious.”

The case for an Irish Brexit is growing stronger, by Ray Bassett

Former Irish ambassador to Canada argues that Ireland’s behaviour in backing EU bad behaviour over Brexit has poisoned relations with the UK. Any kudos gained with the EU has quickly dissipated and membership of the bloc has become a cold house for Ireland.

“Throughout the Brexit process, Ireland has placed all its bets on the European Union.”

15 years: a self-inflicted wound for the Government – and the country, by Catherine McBride

Waiting 15 years to open the UK market to Australia’s unsubsidised beef farmers is not how you Get Brexit Done. If UK farmers were efficient, they may have a case for opposing this trade deal – although if they were efficient, they wouldn’t need one. The problem is not that Australia’s unsubsidized farmers are too good, it is that most UK beef and lamb farms are too small. But it is this squeaky wheel that looks like, yet again, it will get the oil. Leaving the British populous to continue overpaying for their red meat, while also picking up the bills of the Britain’s most inefficient farming sector.

“The sooner trade with more efficient producers moves to zero tariffs and quotas, the sooner the Brexit trade dividends will arrive benefiting the whole economy.”

Out of the Frying Pan, into the Fire: The Sausage Wars heat up

First it was ‘nothing is agreed until everything is agreed’, now it’s ‘nothing is negotiable, everything is applicable.’  President Macron’s inflammatory remarks ahead of this weekend’s G7 meeting underscore the rigidity of the approach taken by the EU toward the northern Irish Protocol.  And contrary to his strident certitudes, everything is negotiable because the Protocol is self-contradictory: it promises both to apply the single market’s regulations without diverting trade.

Indeed, the Protocol expressly provides that the Joint Committee can exercise discretion and flexibility in how it is enforced.  But without good faith and flexibility from the EU side, the system cannot preserve stability.  Aggressive rhetoric from Paris makes the situation less tenable by the day.

So unreasonable is the commission’s pigheaded disregard for Unionist sentiment, in fact, that even strongly pro-Remain writers in the UK have remarked on the need for compromise in the application of EU rules.  Not all, of course – George Peret QC defends the Commission’s supposed ‘legal purism’, though one can hardly be a legal purist when the treaty itself is unclear.  And such purism is easy to celebrate in the metropole when one isn’t facing the fear of riots and returned sectarianism.

Indeed, there are signs that even Biden’s US, for all its president’s Hibernian romanticism, may press Brussels to be more flexible in its demands for the application of checks.  Despite the headlines about the US ambassador’s formal protest to the UK, the former US special envoy to the Ulster has suggested that the EU is ‘making a mountain out of a molehill’ over SPS checks.  This confirms, if confirmation was needed, that the EU principally cares about preserving privileged food access to the lucrative UK market, and not about practical solutions.

Nonetheless, it’s hardly clear what the Biden administration can offer (or threaten) even if it does take a more pro-European position.  The US president has suggested that a trade deal would be reachable with the US even if the UK aligned to EU safety standards.  Yet trade deals need to be approved by Congress, and there’s little sign that Biden would be able to persuade America’s powerful agricultural lobbies in Congress to care about Northern Ireland – or even, once the UK committed to alignment, that he would uphold his end of the bargain.

Finally, we need to mention the proposal being discussed in the EU to impose checks on food products entering the rest of the bloc from Ireland in the event that the UK doesn’t back down and impose a border in the Irish Sea.  To some extent, such an impromptu British Isles-wide SPS area is a rather sensible idea, though not one that should be imposed by the rest of the EU on the Irish government without its consent.  After all, the UK receives as much Irish food, drink and horticulture as nearly the whole EU combined.  (Ireland also receives much less in food exports, demonstrating the spurious logic of Brussels’ concern.)

Such discussions illustrate the Alice-in-Wonderland logic of EU legalism pushed to extremes.  In order to save the single market’s ‘precautionary principle’ from the non-existent threat posed by British food products, some in Brussels are willing to compromise on the far more fundamental issue of the single market’s integrity.  And it’s clear evidence, too, of the EU’s persistent willingness to bully its own members: giving the lie to the idea of a Europe of equals on which the membership of small nations is predicated.  Scottish separatists should take note: leaving the UK for the EU is a loss of independence, not a gain.

A number of papers have picked up on research done by pro-Remain academics at Aston University (connected with work done at the Center for European Reform) which claims that UK service output has shrunk UK service exports by £110 billion between 2016 and 2019, compared to if the UK had never voted to leave.

This hypothetical calculation, positing such a vast decrease, bears little resemblance to the actual economic numbers.  Indeed, if plotted on a graph, the value of UK service exports 2016-2019 was slightly above the trend growth line until COVID: 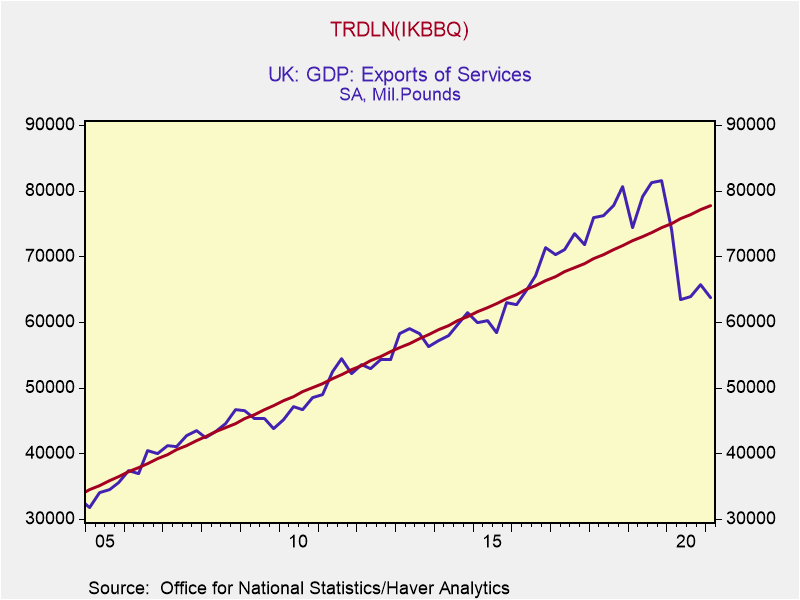 UK service exports increased in terms of volume as well as mere value between 2016 and 2019 – and indeed grew faster than those of the US.  One may compare also the data adduced by the economist Julian Jessop, which show similar trends in the value of service exports in France and Germany.  Indeed, in the FT’s coverage, though the Aston report’s authors ascribe high Irish service export growth to the effects of Brexit, Irish analysts disagree, pointing instead to the country’s links with tech firms.

The problem with the kind of counterfactuals that studies like the Aston University one employ, as we’ve discussed before, is that they’re based on highly speculative models of how countries ought to have performed based on the observed performance of other countries (see an earlier Center for European Reform paper for details).  Though the authors of reports like this try to control for such factors, they are ultimately speculative: they make good headlines, but offer little by way of certainty.  Particularly if the assumptions of those making them direct the models, the outcomes are all to easy to dictate in advance.