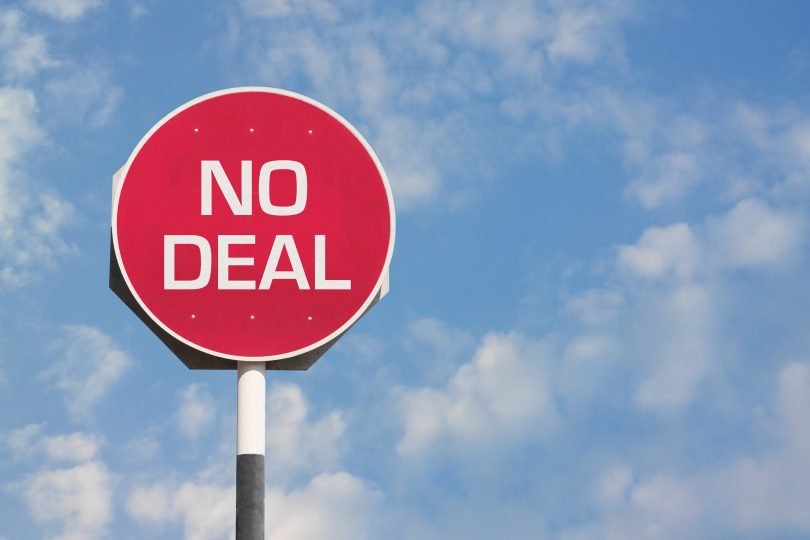 Rob Lee views the recent White Paper on Brexit as meaning no realistic prospect of future trade deals, no effective parliamentary control over many of our laws and regulations, the continued supremacy of the ECJ in key areas, and no independent immigration policy. And we still agree to pay the EU 39 billion pounds, with the probability that even more will be added to this sum in the negotiations. He concludes that the probability of the “no deal” scenario has risen dramatically.

The so-called Chequers Proposals are the final straw. It is clear now that Mrs May has no intention of delivering the kind of Brexit that she has all along promised. The brilliant forensic legal examination of the proposals by Martin Howe QC[i] is particularly damning and clarifies in precise legal terms just how far the government is going down the road of capitulation.

Why are these latest government proposals so bad? On the surface the twelve point summary released after the Chequers meeting sounds okay. Here it is:

The key problem lies in point 5, with very serious knock on negative effects in virtually every other area. If the UK adopts the proposed “common rulebook”, it will in effect have to obey and apply all current AND future EU laws relating to industrial and agricultural products, without having any say in those laws. In large swathes of our economy we would be a “rule taker” not a “rule maker”, and will have signed a treaty committing ourselves to this. This is what is meant by being a “vassal state”.

What about the “parliamentary lock” referred to in point 7? Surely this means sovereignty still lies with Parliament?  We would theoretically have the “ability to choose not to” incorporate any future changes in EU law (though not to change existing laws that do not suit us). However, the treaty would give the EU the right to punish us – for example by withdrawing market access – if we were ever to actually exercise this apparent freedom. It is important to note that Norway has a similar theoretical right not to impose relevant EU laws, but has never successfully exercised it. Norway last tried this in 2013, only to back down in the face of severe EU countermeasures. Furthermore, according to Howe’s detailed legal analysis, the ECJ will remain the ultimate arbiter of law in all related areas. The “parliamentary lock” is a phantom.

It is crucial to note that although only around 12% of UK companies export to the EU, the “common rulebook” would apply to all UK companies involved in UK production of industrial and agricultural products AND to all such imports from third countries. The fact that the EU would be the rule setter over such a large field would give it great scope to hinder our competitiveness and development of new technologies. It is important to note that many such EU rules are not based on genuine safety grounds or scientific principles but are hidden forms of protectionism. This is particularly so in agriculture.

Equally if not more significant, inability to set our own rules will be a great hindrance in achieving new trade deals. Modern free trade deals are concerned more with non-tariff barriers to trade than with tariffs. Without the flexibility to agree to accept goods from other countries that have different standards – “mutual recognition” agreements – the scope for new trade deals is very limited. The two countries that are the most keen to negotiate trade deals are the USA and Australia, but neither are going to be much interested if agriculture is effectively off the table as it would be under these proposals. The proposed new Facilitated Customs Arrangement is a bureaucratic, costly, unproven and possibly unworkable system. In any case it would take a number of years before the UK could reduce tariffs under this system. The proposed arrangement is therefore a further major impediment to trade deals with non-EU countries. It is surprising that the International Trade Secretary, Liam Fox, has not resigned as under these proposals his department will have little to do.

Even more disturbing is that the government is signalling even further concessions to the EU, particularly relating to freedom of movement. As it stands the EU is most unlikely to agree to the proposal for full access to the single market in goods without insisting on continued free movement of labour. The government seems to be hoping that if the UK concedes some preferential access for EU citizens then the EU will bend on single market access. This is conceivable but unlikely, but in any case would be another clear betrayal of the government’s election manifesto and all Mrs May’s previous Brexit statements.

So, on closer examination we find that these proposals mean no realistic prospect of future trade deals, no effective parliamentary control over many of our laws and regulations, the continued supremacy of the ECJ in key areas, and no independent immigration policy. And we still agree to pay the EU 39 billion pounds, with the probability that even more will be added to this sum in the negotiations!

Where do we go from here? The political situation is now extremely fluid, and I am not even going to try to guess possible future permutations. However, there are some things that we can be fairly sure of. Firstly, the EU is unlikely to accept these proposals as they stand and will demand further changes. Secondly, there are certain to be a large number of Tory MP’s who will vote against any deal reached on this basis. Any further concessions from the government will only increase this number.

It is furthermore unlikely that Labour will be able to resist opposing any deal that the government reaches, no matter how similar it is to Labour policy (to the degree we know what that is). Furthermore, the legal process by which the UK leaves the EU is well advanced and will be very difficult if not impossible to stop.

This analysis leads me to conclude that the probability of the “no deal” scenario has risen dramatically. The terms “soft” and “hard” Brexit were always misleading – “messy” (which is what the government is now aiming for) and “clean” are much more properly descriptive. “No deal” is similarly misleading terminology. There will be agreements in place on issues such as security cooperation, citizen’s rights, UK participation in selected EU programmes, an aviation deal, and the like. What there won’t be is a free trade deal with the EU, though agreement can be reached to pursue one after the UK has left the EU.

EU/UK trade will in the meantime then revert to WTO terms. Although there will be some adjustment costs and transition hiccups, the alarmist fears raised about this scenario are ridiculous. After all more than half of our trade already takes place on this basis, as does the bulk of world trade. There are tight legal protections and procedures governing such trade, with strong enforcement mechanisms available, to allow the free flow of goods and services without the need for a trade deal (much less membership of the single market or customs union).  One of the few positives to come out of the Chequers meeting was an agreement to step up preparations for “no deal”, and David Davis himself has said that such preparations are already far more advanced than generally realised (Mrs May having stopped announcements of such progress, in case the EU found them provocative!).

It would be ironic indeed if the “clean” Brexit that many Brexiteers hope for is in the end brought about not by a determined and principled UK government, but by accident and incompetence and by the unfailing inflexibility of the EU itself!

[i] “The Chequers Conclusion” http://lawyersforbritain.org/wp-content/uploads/2018/07/Chequers-Briefing-Memo.pdf