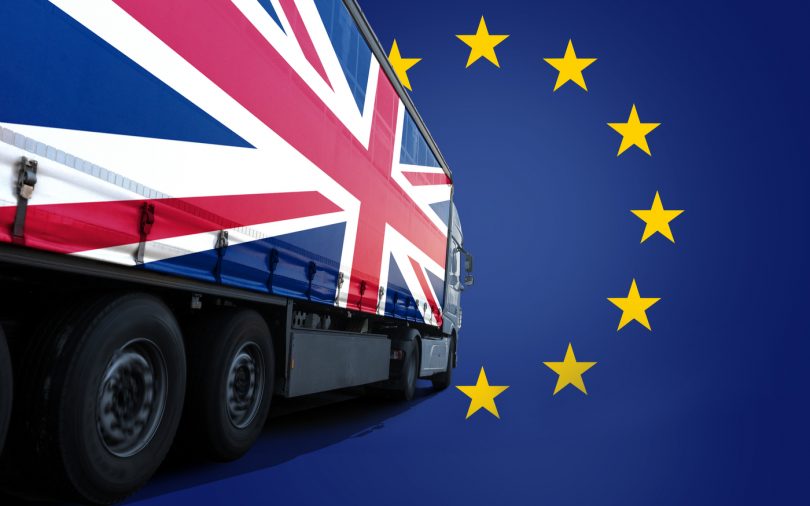 Recent claims that UK services exports have been badly hit by Brexit are not backed up by the data. Unlike with goods, there was no dip in services exports to the EU at the start of 2021, and nor does the evidence support the contention that services exports growth slowed in the years after the Brexit referendum. Indeed, UK services exports seem to have performed better since 2015 than those of key competitors such as the US or France.

Much attention has been focused recently on the performance of UK goods exports following the UK’s exit from the EU single market and customs union (for our recent analysis of this, see here). But what about services exports, which macroeconomically speaking are as important, if not more so, to the UK?

Here, too, there have been claims that Brexit has caused massive damage. Most notably, one group of academics has claimed that UK services exports have been £113 billion lower than they would otherwise have been, due to Brexit.

A brief glance at the basic data should already make us wary of this lurid headline figure. This figure is equivalent to over 35% of total UK services exports in 2019, which looks enormous. But we soon discover that the £113 billion figure is a cumulative estimated loss over four years from 2016-2019 (when cumulative services exports were £1.2 trillion), so there is already statistical sleight of hand at work just in the presentation of the data.

Worse still, the actual UK services trade data do not point to any significant negative effect on UK services exports since 2015 attributable to Brexit.

First, let’s consider the short-term picture. Services exports were badly hit in 2020 due to the pandemic which in particular crushed transport and travel trade. This makes year-on-year comparisons of little value at present. But we now have seasonally adjusted data for UK services exports in Q1 2021 which allows us to see how services exports reacted at the start of this year to the UK fully leaving the EU’s trade and regulatory systems. These data show no sign at all of any decline in exports. Instead, UK services exports to the EU grew by 2% on the quarter in Q1, continuing their recovery from the pandemic-related losses in 2020 (see Chart 1). 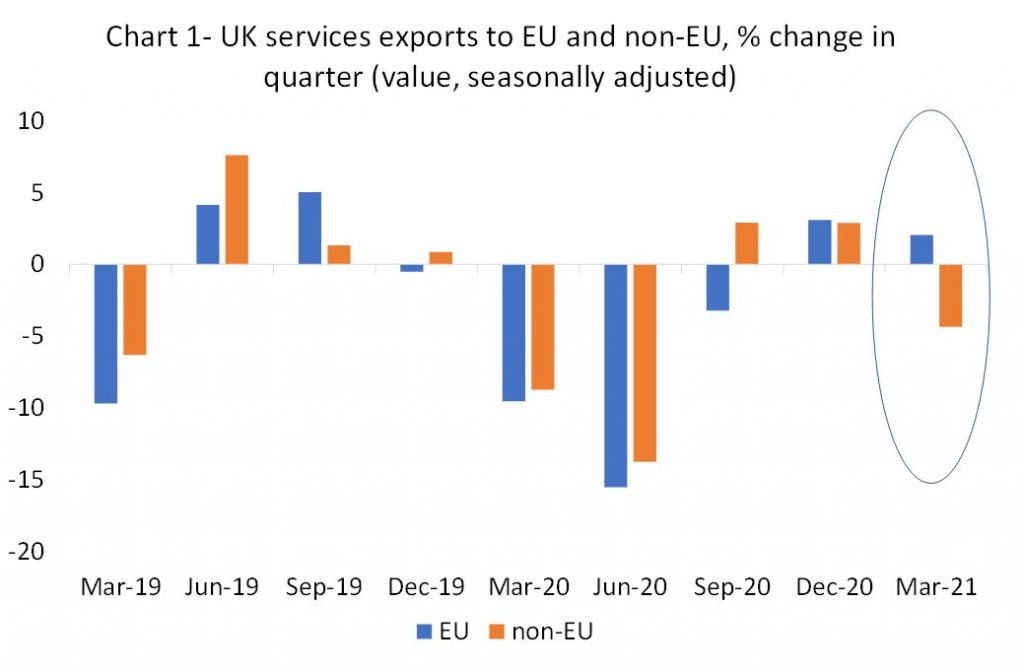 As services exports would not have been impacted by the UK leaving the customs union, a smaller effect at the start of 2021 than seen for goods is unsurprising. But services exports are affected by single market rules, so the lack of any impact is striking (especially given press stories focusing on supposed losses of financial services business and issues for other sectors).

Perhaps, though, the damage was already done in the years since 2016, with UK service exports gradually losing ground in anticipation of the UK leaving the single market? This seems to be the argument that some observers are making. Again, though, it simply isn’t supported by the data. 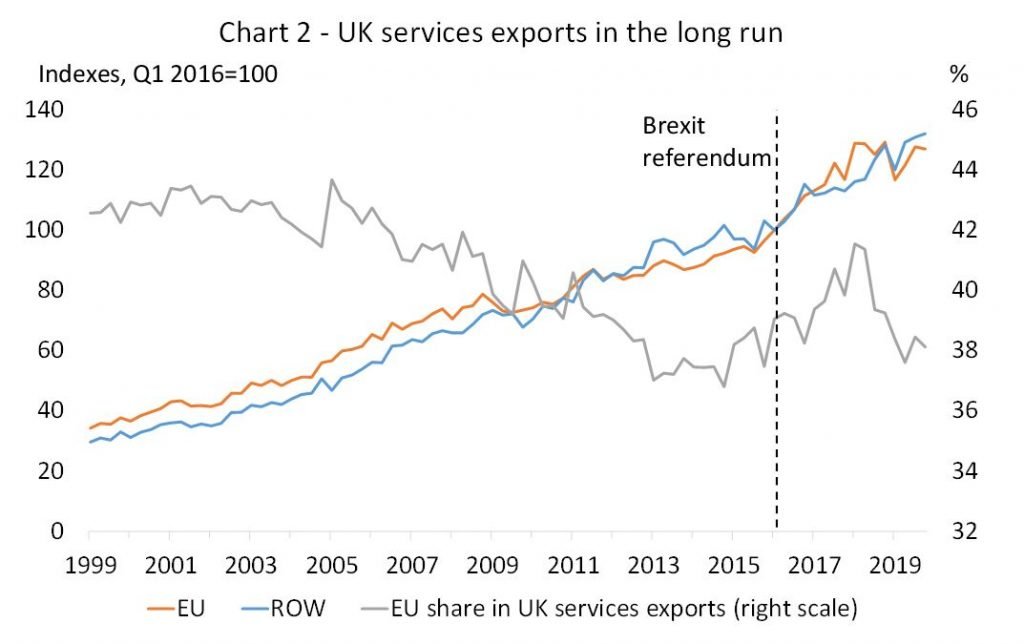 If we look at a long time series of UK services exports we can see that from Q1 2016 (i.e. just before the Brexit referendum) to Q4 2019, exports to the EU rose by 27% and those to the rest of the world (ROW) rose by 32% (see Chart 2). If we assume that the gap between those numbers is a Brexit effect, that implies services exports to the EU might, as of Q4 2019, have been about 4% lower than if Brexit hadn’t happened. Total UK services exports might have been 1.5% lower – equivalent to £4.8bn. This is a very long way from the claimed loss of £113bn noted above. 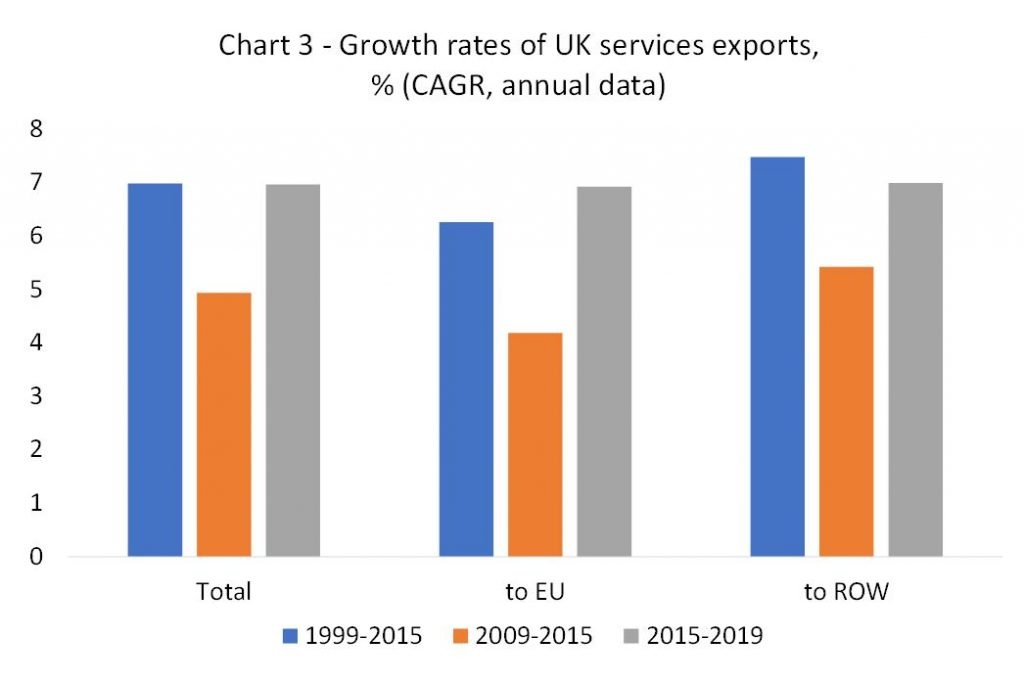 In fact, even this rather modest estimated decline in services exports can’t be substantiated. There would be nothing unusual about services exports to the EU growing more slowly than those to non-EU destinations – that’s been the pattern for most of the time since 1999, during which the EU’s share of UK services exports has trended lower. The slight divergence since 2015 need not be a Brexit effect at all.

And even the modest apparent gap between EU and non-EU service export growth seen in the quarterly data since Q1 2016 may just be statistical noise. If we use annual data instead (which smooths out some of the quarterly fluctuations), we can see that UK services exports to the EU and ROW grew at the same annual pace, around 7%, from 2015-2019 (see Chart 3). This actually represents an improvement in the performance of EU services exports, relative to exports to the ROW, compared to both the 1999-2015 period and the 2009-2015 period. 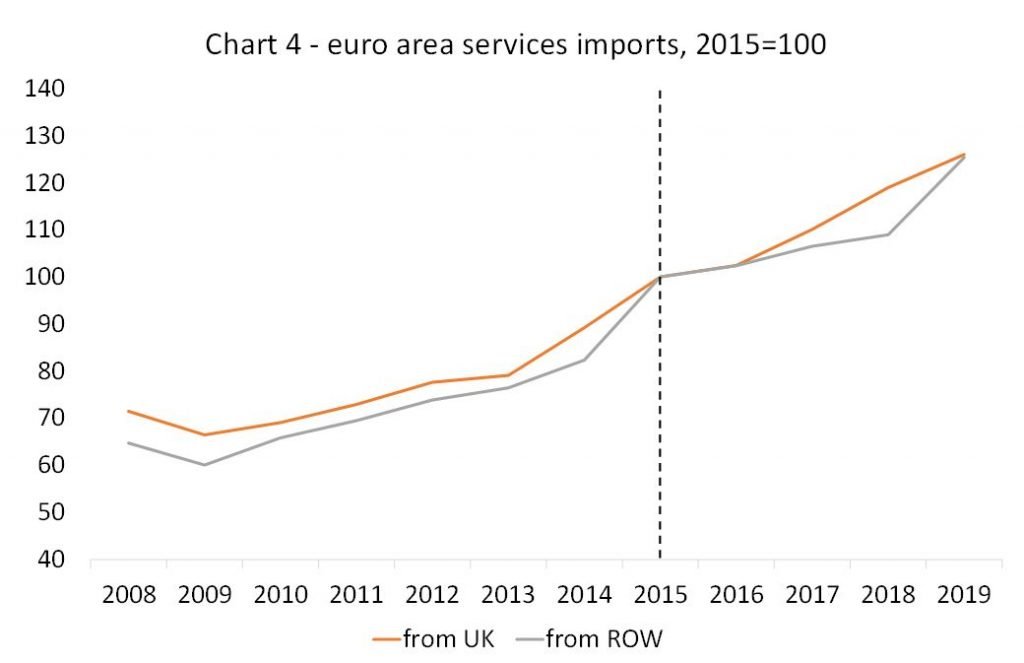 As a cross-check, we can also look at data from the EU side in the shape of euro area data on services imports from various economies. This shows that from 2015-2019, services imports from the UK and from the ROW rose at exactly the same pace, around 25% (see Chart 4). Interestingly, there is no sign in this data of the apparent flattening off of UK services exports to the EU in 2018-2019 that is visible in the UK data. This again suggests the latter may just be statistical noise.

The available data suggest – at most – a very modest underperformance of services exports to the EU, relative to those to the ROW, from 2015-2019. But this apparent underperformance can’t be directly linked to Brexit; would be unsurprising if it did exist given longer term trends; and may in fact be nothing more than statistical noise. Meanwhile UK services exports performed well from 2015-2019 compared to those of key competitors like the US and France. With the data for Q1 2021 also showing UK services exports to the EU to be up on the previous quarter, despite the UK’s exit from the single market, the picture looks to be one of ‘steady as she goes’. Claims that UK services exports have been hamstrung by Brexit appear to have no basis in fact. 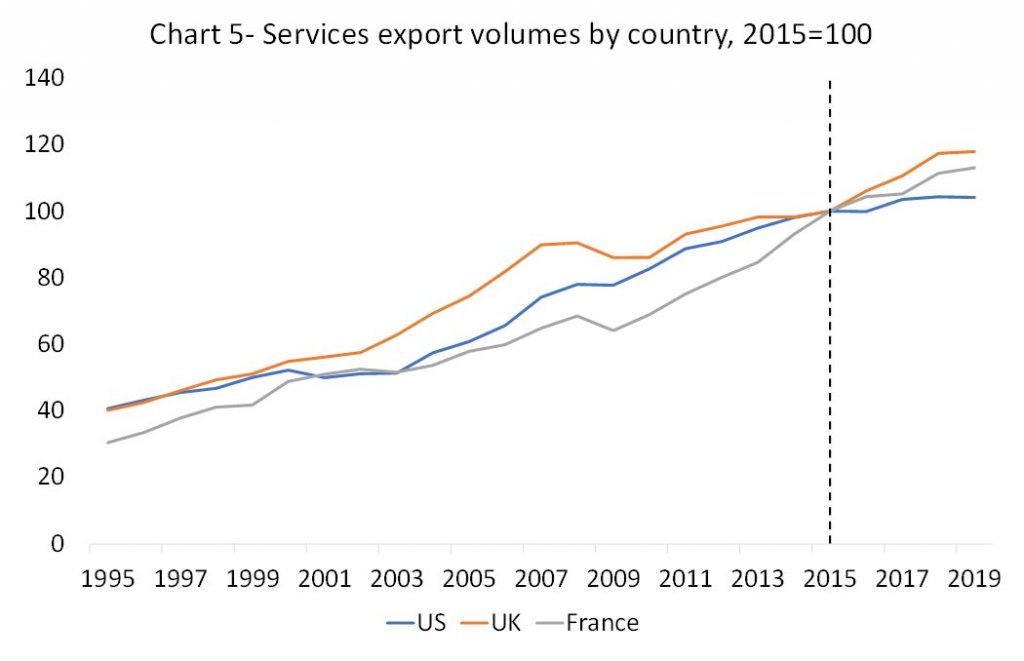