Whenever there is a call for a cut in methane invariably the Western media interprets this to mean a reduction in eating red meat. But are ruminant animals the only place where methane is produced and if not, is red meat the most sensible cut?

At COP26 (the 26th Conference of Parties) the US and the EU have pledged to cut methane emissions by 30% compared to 2020 levels by 2030. So far 90 countries have signed the global methane pledge, but Russia, India, Australia, and China were not amongst them.

Whenever there is a call for a cut in methane invariably the Western media interprets this to mean a reduction in eating red meat. But ruminant animals, cattle and sheep, are not the only producers of methane and red meat is not the most sensible reduction. In the process of digesting grass ruminant animals, produce methane, referred to as enteric methane which mostly enters the atmosphere from animal burps. While animal dung also produces methane, this can be captured as slurry from cattle sheds or goes into the soil from pasture raised animals.

But animals raised for meat are not the only producers of methane. Dairy cattle also produce methane, but we rarely hear a cry from the media to cut down on milk, ice cream or cheese when methane reductions are being discussed. Even though it takes about 10 litres of milk to create a kilo of cheese, the dairy industry has managed to keep its head down and point to beef and sheep producers.

But methane doesn’t just come from animals. Rice paddies also produce methane, and we never hear environment activists demanding a reduction in eating rice. And of course, anthropogenic methane (from humane activity) only accounts for 60% of global emissions but (sensibly) no one is calling for wetlands to be drained and bison herds to be culled.

Unfortunately, the environmental lobby seems to be dominated by people who have convinced themselves the Western way of life is evil even though it has lifted millions out of poverty. It has lifted so many millions out of poverty that we now worry about what they eat. In the 1960s Western children had to finish their dinner because people were starving in China, Africa and India. Now apparently, they are eating so much beef, rice and cheese – activists want them to pledge to cut their food production. Does any rational person think that is a good idea?

Northern Europe does not have the climate to grow rice, or even soybeans for that matter, but its population has evolved to tolerate cows’ milk beyond childhood, and traditionally eats meat. Admittedly we once ate less of it. When Europe was mainly Catholic, people did not eat meat on Fridays or during Lent, which coincided with the European spring – so generally a sensible time to not eat your farm animals.

When it comes to reductions that could benefit climate change, everyone is willing to give up something that they rarely used or didn’t value. For example, the UK who have been cutting down their own forests since before the Norman conquest (apparently losing access to US timber for ship building was one of the biggest problems for Britain after the American War of Independence) have proposed an initiative to halt deforestation by 2030 as a way of limiting climate change. 133 countries have signed it. The BBC has immediately trumpeted this initiative with a picture of a herd of cattle illustrating deforestation, – rather than of a man wielding a chainsaw. The picture’s caption reads ‘Trees are often cut down to create grazing land to feed the world’s hunger for meat.’ The story claims that Brazil is clearing its forests for cattle farms – but many Brazilian farmers are growing soy and corn which is sold to European farmers to feed chickens, pigs, and dairy cattle. Did any European nation pledge to stop buying soybeans for cattle feed? No? The BBC seems to have skipped over this inconvenient truth.

Russia cuts down the most trees in absolute numbers, with Brazil a close second. But as a proportion of their land mass, Brazil and Russia probably cut down fewer trees than most other nations. Russia is by far the largest country on earth and Brazil is the 5th largest. Anyone who has travelled on the Trans-Siberian railway will know that for at least two days, but maybe it was four, you literally cannot see the forest for the trees.

If the UK can give up ‘deforestation’ by 2030, (at least 1000 years too late), then when it comes to methane reduction, I will happily pledge to give up eating rice. I am sure that vegetarians in India will happily announce to COP26 that they will give up meat, while lactose intolerant Southeast Asians may happily announce that they are giving up milk. And vegans will play one-upmanship by claiming they will give up both milk and meat, however humane flatulence also contains methane, so living on beans may not be the solution to methane reduction.

This is why the one size fits all solutions to climate change are unlikely to work. But collectively we could all cut our methane emissions without changing our diets.

If we look at a detailed photographic world map of methane emissions, we see that few countries produce high levels of methane everywhere, but some specific areas produce an awful lot. In the US for example the Appalachians, is coloured red for its high methane emissions. But This is the heart of the US coal industry, not its beef industry. 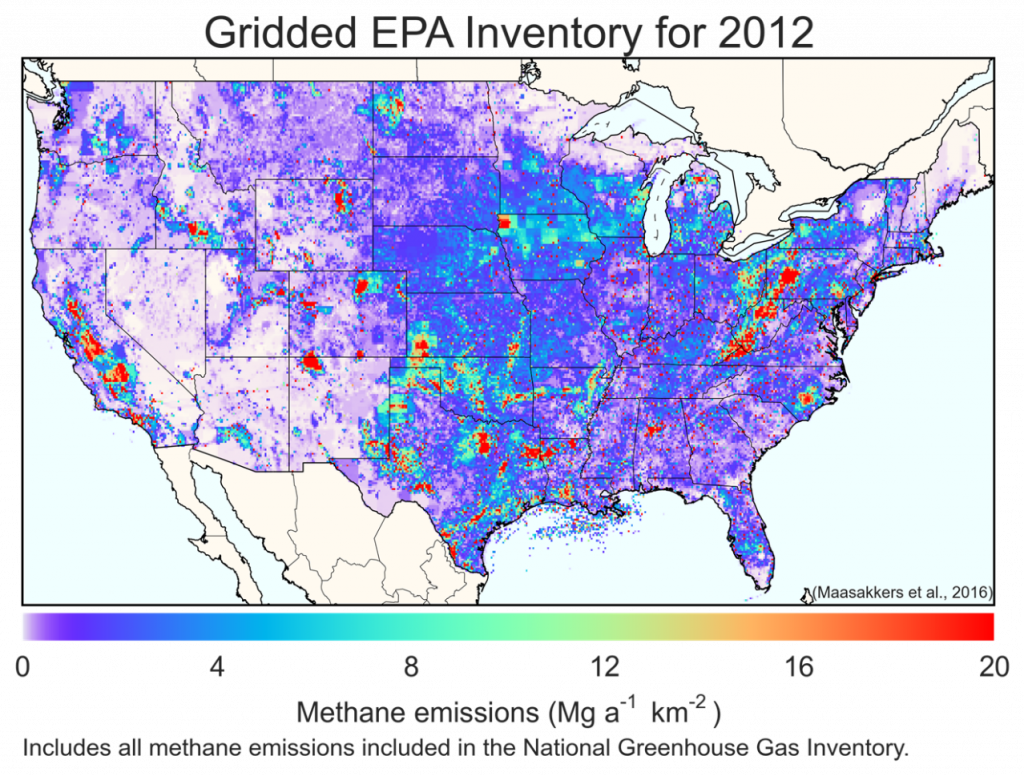 While every methane molecule is the same, its importance to humane life varies enormously and so methane from different sources should be treated differently. Just as everyone at COP26 apparently wants the world to reduce CO2 emissions, no one is proposing Breathless Tuesday to follow Meatless Monday, even though our exhaled breath contains about 100 times as much CO2 as the atmosphere. In fact, just the opposite is happening, with a media outcry that an unmasked Boris Johnson may have been resorting to a Malthusian solution while sitting beside the 95-year-old David Attenborough at COP26.

But there is one solution where the world should be able to agree.

Methane doesn’t only come from food production. It also comes from rotting vegetation and garbage in land fill. The UK has dramatically reduced its methane emissions since 1990. According to Defra’s Agriculture in the UK, UK methane emissions have fallen from 135 million tonnes CO2 equivalent in 1990 to around 55 million tonnes in 2019. A 60% fall in total but with only a 13% reduction in agricultural emissions which have mostly come from better manure management.

In 1990 roughly 80% of the UK methane emissions came from non-agricultural sources – such as natural gas, coal mines, and landfill. Over 50% of the UK’s methane reductions have come from improved landfill waste methane and 37% from reducing ‘fugitive’ methane emissions from fuels. Natural gas is over 80% methane, and ‘fugitive’ emissions escape during drilling, extraction, and transport. 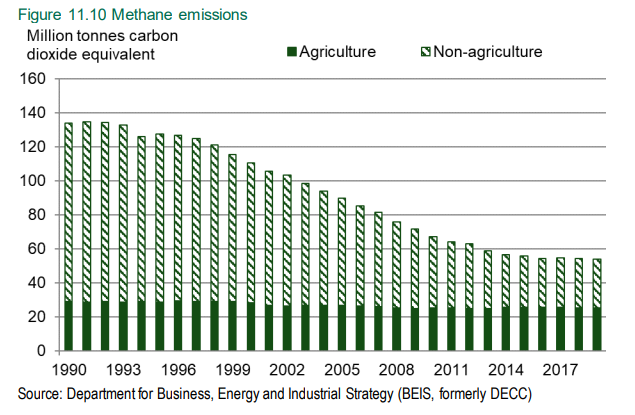 So why is there a knee jerk reaction from activists to cut food production rather than landfill, waste or leaky gas pipes? From the Bioenergy study, every geographic area, with the exception of Central Asia, could cut its methane emissions by around 20% purely by cutting, or better capturing, its landfill and waste methane. While all continents (adding Brazil back into Latin American) could cut methane reductions by 30% or more from non-food sources. 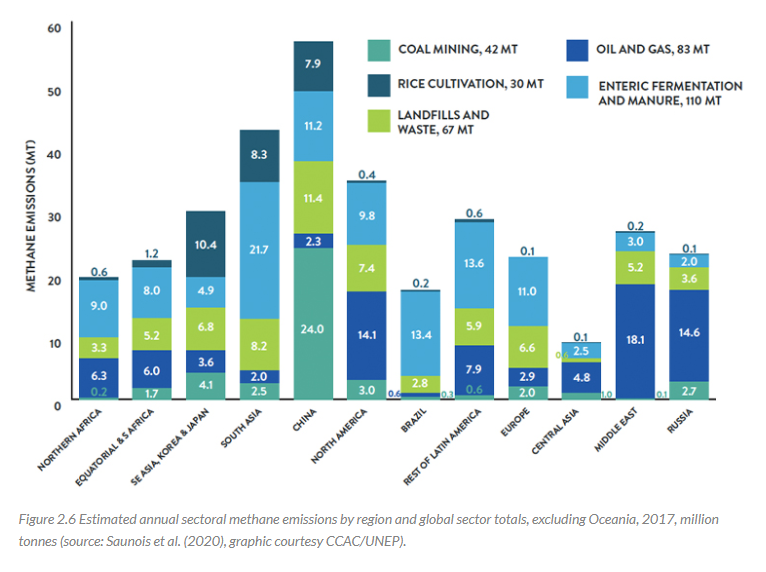 Imposing a tax on meat as a knee jerk reaction to cutting methane production would be a mistake when landfill methane can be collected and burned to produce electricity or heat buildings. As can methane from manure. Anaerobic decomposition of solid municipal waste produces 40% – 60% methane, which is collected through wells drilled into the landfill, porous pipes allow methane to enter the wells from whence it is cleaned and compressed.

Cutting methane is a good idea, although it has a shorter half-life than CO2 as a greenhouse gas it is apparently 80 times more potent. The UK has done this and should be leading the methane initiative by proposing a reduction in and utilisation of global landfill methane, not a reduction in food production.