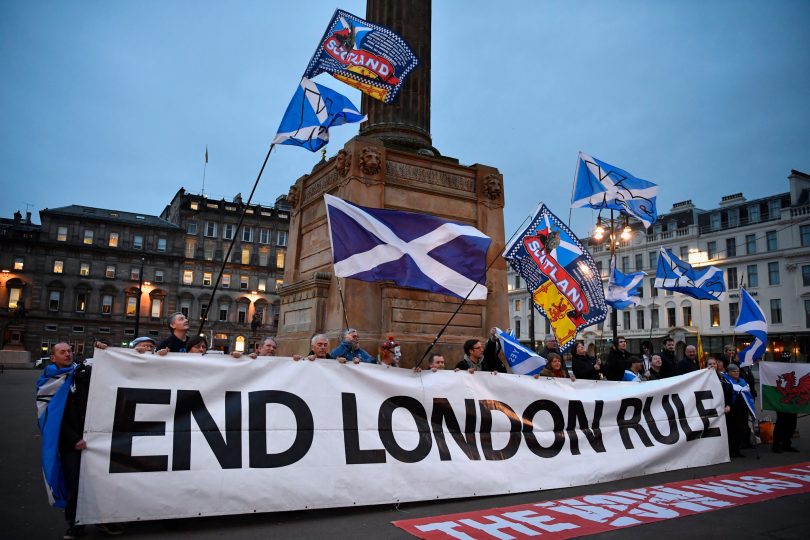 With supporters of Scottish independence riding high in the polls, the UK Government needs to take the task of preserving the union more seriously. Graham Gudgin argues that UK subsidies to Scotland should become more transparent and the anti-English element of Scottish history should be challenged.

When Douglas Murray wrote recently that Scottish nationalists are unique in escaping the opprobrium usually associated with nationalism he was only half right. Irish nationalists have pulled off this trick for decades or centuries even when their supporters were killing people. The trick is to make liberals view the nationalist cause as escaping from victimhood. Rather like escaping from a bad marriage, many will support the new beginnings of independence. Who would not have supported the Finns escaping from Russian domination? The West always supports nationalists escaping from its opponents grasp, like the new nations emerging from the Soviet-bloc, even including Kosovo, a province of the greatly disliked Serbia.

Even more than the Irish, the Scots have a good case in arguing for independence. Their history and geography sets them apart. They were an independent state for many centuries and could be one again. To write, as Murray did, that an independent Scotland would ‘join sub-Saharan Africa in the world poverty indices’ is silly and will of course be taken as typical English condescension. The battle to save the union is now deadly serious and must be treated seriously.

We must recognise that devolution in the form adopted in 1998 was a mistake. Although there were misgivings at the time, the Labour view that devolution would strengthen the union prevailed but is now in tatters. Devolution cannot deal with a contested adherence to the wider nation any more than it could in Ireland. Labour domination of Scottish politics was viewed as sufficient protection for the union especially with an admirable leader in Donald Dewar. However, as the unifying memories of the world wars faded, along with strong memories of Scottish martial prowess, feelings of separateness could be built upon. Although the SNP hate the idea, latent nationalism was reignited by North Sea Oil.  The SNP first made real electoral gains under the slogan, ‘Its Scotland’s Oil’. The potent mix of a distinct national identity allied with financial strength was there to be exploited by middle-class Scottish nationalists who stood to gain financially and in status from independence.

The SNP’s problem was to carry with them the working class especially on Clydeside. Thatcherism provided opportunity with its use of Scotland as a testbed for the poll tax and the SNP grasped it gratefully. Ever since they have presented themselves as progressives. The long withdrawal of Labour from its historic role in defending working-class interests gradually overcame electoral loyalty, and just as in the red wall of northern England, Labour surrendered its Scottish base.

All of this is a national tragedy, but we are where we are. The task now for unionists is to face up to the realities of the problem and to avoid superficial remedies and soft-soap talk. These include avoiding a reliance on throwing money at the problem. Just as in Northern Ireland, the flow of cash from England does little to soften nationalist sentiments. Money is accepted without gratitude. Feelings of financial dependence can just as easily foster resentment as generating a need to ‘cling to nurse for fear of finding something worse’. In Scotland, the majority have never heard of Rishi Sunak, the saviour of their economy during a global pandemic.

Although the realities do indeed include living standards supported by financial subsidies from London, we should not assume that this will be decisive. Scotland’s economy is quite strong, with per capita GDP at close to the UK average. There is little doubt that Scotland could emerge as an economically successful nation rather like Denmark. Subsidies are not necessary to bring Scots up to English living standards but rather have allowed Scottish living standards, and especially public services, to be better than in England and higher than their own resources would allow. ONS data shows that Scottish living standards are well above the English average and close to those of London once house price differences are taken into account. Scots may be willing to settle for a degree of austerity in return for independence, and with post-independence living standards at something close to the English average, their lot could be acceptable.

So, what is the case for the union. The core case is that three-hundred years of successful union should not be lightly tossed aside. The UK has been a force for good in the world through this period and can continue to fill this role. As a nuclear power with a seat on the UN Security Council and at the centre of a multi-racial Commonwealth of nations, its global reach is immense. The SNP’s alternative of a future inside the EU may yet backfire if the UK secures a satisfactory deal with the EU and demonstrates that, like Switzerland, Norway and Iceland, economic life outside the EU can be quite satisfactory. A slogan of ‘Give Back Control (to the EU)’ would hardly help the SNP. An EU border at Berwick would be a nuisance for everyone but especially the Scots.

The financial strength of the UK might not be decisive but is nonetheless a strong card which should be played vigorously.  The Barnett Formula under which Scotland has received its subsidies since 1979 does little for the union since it leaves financial support largely invisible to voters. It needs to be quickly replaced by a UK Cohesion Fund. Public funds should be initially allocated on a simple basis pro-rata to population. This would leave Scotland, Wales and Northern Ireland well short of what they currently receive, and the difference should be made up from a cohesion fund which makes it fully clear what money is coming from where. We need not go as far as putting Union Jacks on new roads or buildings, but the message would be clear.

Finally, although it is dreadfully late in the day, efforts should be made to contest Scottish beliefs about their own history. Like the Irish, the core of national identity is built upon beliefs about a successful resistance to English attempts at dominance, in the Scottish case most notably at Bannockburn. The real story, as in Ireland, is not of attack from the English but by French-speaking Normans who, having overrun England, expanded further into Wales. Ireland and Scotland as well as Southern Europe and the Middle East. Scots’ resistance was helped by bringing in their own Norman barons, including the Le Brus and Bailleul families, and unifying their own diverse ethnic groups under William Wallach (William the Welshman). Even so, this would not have worked without the Great Famine, the Black Death and the Hundred Years War to deter the Norman descendants. Independence from then on was then a largely sad story of poverty, feudal dominance and dissention, until the Scots flowered magnificently within the British Empire. David Starkey’s description of pre-union Scotland as a ‘benighted hellhole’ might be too strong but is reminder of why the union was so positive for the Scots.

Having tied themselves to an England on the up, Scots are tempted to jump ship from what they see as English decline. The best tactic is to persuade and demonstrate that a post-Brexit UK has a bright future, remaining a force for good in a troubled world. This needs to be a national effort involving historians economists and many others. If we leave the task to Johnsonian bluster, we can expect the worst.

Dr Graham Gudgin is honorary Research associate at the Centre for Business Research, Judge Business School, University of Cambridge. He was Special Advisor to the First Minister in Northern Ireland 1998-2002.