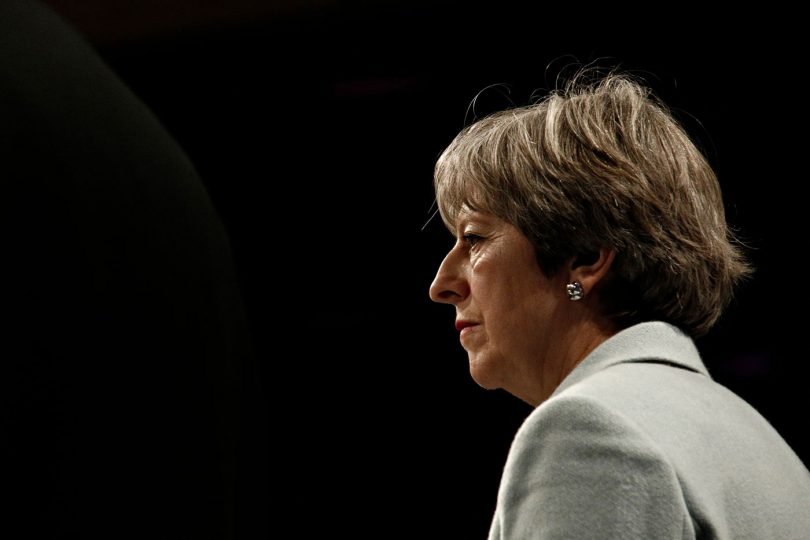 In this edited version of his article for the Northern Ireland;s pro-union daily – The Belfast Newsletter – Graham Gudgin predicted that far from preferring no deal to a bad deal Theresa May will only ever offer a bad deal or no Brexit. He suggests that the DUP may have it in their hands to engineer an end to Theresa May’s premiership.

Theresa May’s approach to Brexit has been, to say the least, difficult to follow. She started by ruling out a customs union and single market plus promising no difference in treatment for Northern Ireland. Since then almost all of this has been jettisoned.  As so often in politics it is difficult to work out from the outside whether this is due to cock-up or conspiracy.

One interpretation is that, despite her early statements, she has aimed at keeping the UK inside a customs union at least since the 2017 general election. This looked to her like a compromise, even though a customs union involves handing over UK trade policy to the EU, including the setting of tariffs, leaving the UK with no say in the matter and with no freedom to agree our own trade agreements.

The Irish border issue, on this interpretation, was a convenient prop rather than a genuinely insoluble problem.  Reasons for opposing no deal change from speech to speech. Most recently the PM cited a need to avoid a break-up of the union. Lord Trimble and Kate Hoey MP say there is no danger of NI leaving the UK, and Lord Bew says the backstop undermines the Good Friday Agreement, but like everyone else they have been ignored.

Although there are sound reasons for avoiding border posts or cameras, the backstop that the EU imposed on the UK goes much further. It keeps the whole UK in a customs union and Northern Ireland in most of the single market obeying many EU rules. The DUP opposes this for the obvious reason that any divergence of GB from EU rules would require border checks at the Irish Sea. Mrs May has offered the possibility that GB would also observe EU rules so that no divergence arises between NI and GB. The DUP are not buying this since Mrs may cannot guarantee that her successors would keep this promise.

Her policy now is to get parliament to agree the Withdrawal Agreement, including the Irish backstop, by hook or by crook and she continues to refuse to take no for an answer. Three stunning rejections in the Commons have not dimmed her ardour. Having completely failed to convince her own party of the Agreement’s merits she now turns to a Labour opposition previously reviled at every turn. If neither the Labour nor the Tories will support the Agreement, she merely seeks further extensions to keep us inside the EU while she tries again. The only trapdoor for escape from the EU, she allows, is the Withdrawal Agreement that parliament so roundly rejects. Even labour would have to sign this.

She appears oblivious to the fact that the EU’s refusal to take no for an answer in EU referendums was a reason why so many people voted to leave the EU. The undermining of democracy by the EU, which has led to the rise of European populism, is now being imported into the UK. Nor will a second referendum help. If the first referendum is ignored, many will not expect any better outcome from a second and could organise a boycott.

Both Labour and Tories are now playing with fire. Labour MPs may refuse a deal with the Tories which excludes the second referendum that Brexiteer Jeremy Corby clearly does not want. Tories are even closer to revolt. A majority in the cabinet do not want a deal with Labour. Over half of Tory MPs signed a letter to the PM demanding no deal. Meanwhile three-quarters of Tory members want no deal and many are on strike, refusing to canvass or fund the party for this May’s local elections.

Remainers have striven might and main to demonise no deal but the predicted catastrophic consequences are not believed. Polls now show that more voters would prefer no deal to remaining inside the EU. The many arrangements made by both the UK and UK to avoid chaos at the borders or in the air now mean that a smooth Brexit is possible, deal or no deal. In any case no deal would not last long, perhaps not even weeks.

A Canada-style free-trade agreement with no tariffs is overwhelmingly in the interests of the EU even more than the UK. The EU sells to the UK each year £55 billion of goods which would face tariffs of 10% of more (mainly cars and food). The equivalent figure for UK exports to the EU is well under half of this amount. It is not difficult to imagine that the EU would quickly move away from no deal to secure a tariff-free future, especially if the promised £39 billion UK payments to the EU were thrown-in, along with treaty protection for EU citizen’s rights in the UK.

We now know that the project-fear consequences predicted for Northern Ireland would also be avoided. Leo Varadkar has made it clear that if checks were needed in the event of no deal these would be done away from the border. As the DUP keep pointing out, this means that the backstop was never needed in first place. Even, with no deal, NI’s economy should thrive. As the authoritative study of Northern Ireland’s Agri-Food and Bio-Sciences Institute showed, a tariff-induced fall in imports to the UK will lead to a rise in output and prices for most food and drink products. The main exception is lamb, but the livelihood of sheep farmers can be subsidised in what is already a heavily supported sector, until a new free-trade agreement is signed.

None of this will affect what has become a desperate political battle. The new extension of the Article 50 period until Halloween has been agreed once more by executive prerogative rather than by parliament. The PM is single-handedly applying to delay Brexit and the EU are deciding that this can be done and have set the length of delay. Their preferred length of period is tied to their belief in how long TM can survive as PM. We should notice the EU will do anything to avoid no deal but TM persistently avoids using this leverage to UK advantage.

The battle will now rage on at least for a further six months. Remainers will try to use the time to enable a second referendum to overturn Brexit, but leavers now have more time to show that no deal involves minimal disruption and to establish a Canada-style free-trade agreement as the preferred long-term solution. Everything of course depends on replacing Theresa May. Tory MPs seem reluctant to press for a change to the leadership rules but there is another potential route.

One way forward would be for the DUP to remove support for the Tories, and they have made  threatening noises along these lines. The DUP could  engineer a vote of no confidence in the Government with the support of Labour. The PM would then have 14 days to find a majority in Parliament but the DUP could say that they will only support a different Tory leader. The DUP’s 40-minute meeting with Boris Johnson on Thursday may not have been wholly unconnected with such a strategy. We live in hope.