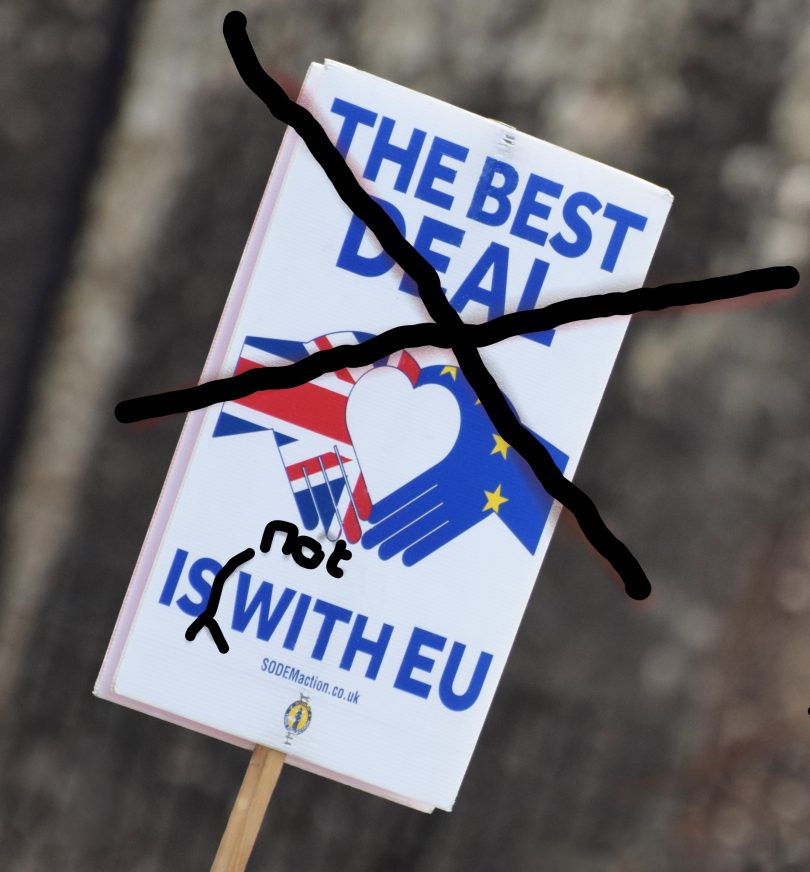 Let’s not mince our words – the Northern Ireland Protocol is all about politics. It was cooked up by the EU in cahoots with a fervent Remainer May government and civil service to negate the result of the Brexit referendum. It had absolutely nothing to do with protecting the Good Friday Agreement nor with ensuring there was no hard border in Ireland – and thus the totally unacceptable backstop was born, reducing the UK to the status of a vassal state of the European Union.

Boris Johnson’s revised Protocol, written at great speed in October 2019, may not be a masterpiece of legal drafting, but it is clear enough. Applied correctly, it protects Northern Ireland’s status within the UK, ensures unfettered access for goods between NI and GB, and keeps the UK out of the EU’s regulatory orbit whilst avoiding a hard border on the island of Ireland. Yet ever since it was ratified, the EU, Remainer officials and judicial activists have been trying to warp its interpretation to include all the unacceptable elements of the old backstop. The role of the civil service in this is deeply troubling (one cannot go into detail here), but Whitehall officials have been fighting a rear-guard action with ministers ever since January in a bid to keep the UK legally subordinate to the EU through the new Northern Ireland Protocol – regardless of the consequences for the Union or the economy and people of Northern Ireland.

So now with the Internal Market Bill we are back to high politics, and the government has raised the stakes considerably. It isn’t just trade talks with the EU that are going nowhere. Talks in the Joint Committee on implementation of the NI Protocol hit a roadblock some time ago, largely because the EU’s maximalist interpretation rides roughshod over its own treaty commitments.

The EU’s insistence that NI businesses must fill in export declarations to send goods to GB is not just a breach of the “good faith” requirement in Art 184 of the WA, but of Article 6(1) of the NI Protocol, which states that “Provisions of Union law made applicable by this Protocol which prohibit or restrict the exportation of goods shall only be applied to trade between Northern Ireland and other parts of the United Kingdom to the extent strictly required by any international obligations of the Union.”

The EU has no international obligations whatsoever regarding domestic trade in the UK’s internal market but has demanded implementation of the Union Customs Code in full in Northern Ireland, in effect creating a hard border inside the UK’s sovereign territory and customs territory.  This is in flagrant disregard of its obligation under the WA to respect the UK’s sovereign territory and legal order and to ensure that “the application of this Protocol should impact as little as possible on the everyday life of communities in both Ireland and Northern Ireland.”

This bad faith and obstructionism is designed, of course, to try to force concessions from the British government in the trade talks. Here, the EU’s demands to control the UK economy through so-called “level playing field” conditions (which far exceed anything required for a basic goods-only trade agreement), and to be able to continue plundering UK waters under a resurrection of the Common Fisheries Policy are in direct conflict with the manifesto on which Boris Johnson won his majority. For him, they are blue lines, not red ones. So his gleeful confirmation at PMQs on 9 September that the Internal Market Bill will give British government ministers the exclusive right to interpret and/or disapply certain sections of the Withdrawal Treaty which conflict with UK law (absent an agreement on such matters before 31 December made through the Joint Committee) was almost certainly designed to set the cat among the pigeons.

The EU’s panicked overreaction to the Bill must have far exceeded the government’s expectations. It has peremptorily demanded that the UK – an independent sovereign country – withdraws domestic legislation relating to its own economy and laid before its own Parliament or face a lawsuit at the ECJ, a trade war, and huge fines. The Internal Market Bill is not yet on the statute book nor is it in force; it hasn’t been fully debated or amended. In demanding the immediate withdrawal of draft clauses – i.e. denying a democratically elected sovereign Parliament the right to scrutinise government legislation – the EU has driven a coach and horses through the WA, which requires it to respect the UK’s sovereignty and legal order. Trying to deny the British people their inalienable right to representative democratic government is an appalling breach.

Eurocrats really do need to get to grips not only with the sharp political operation now installed in Downing Street, but with the subtleties of UK legislation and the terms of the WA. For the Internal Market Bill does not break or disapply international law. It provides powers to UK ministers to interpret clauses in the NI Protocol and make regulations which may be inconsistent with the Withdrawal Agreement in order to fulfil its obligations under the Protocol, and this is allowed for in the clause 38 of the Withdrawal Agreement Act. The Bill also fulfils the government’s manifesto pledge to “ensure that Northern Ireland businesses and producers enjoy unfettered access to the rest of the UK and that in the implementation of our Brexit deal, we maintain and strengthen the integrity and smooth operation of our internal market.” If Remainer Lords try to block the Bill, they will be in clear breach of the Salisbury convention which says they may not veto legislation contained in the government’s election manifesto.

Now, the government could (and perhaps should) have argued that NI Protocol Article 1(2): “This Protocol respects the essential State functions and territorial integrity of the United Kingdom”, and Article 6 : “Nothing in this Protocol shall prevent the United Kingdom from ensuring unfettered market access for goods moving from Northern Ireland to other parts of the United Kingdom’s internal market” amply justify its approach in the Internal Market Bill. But instead Boris chose to slap a metaphorical glove in the EU’s face – and fire a shot across the bows of civil servants who appear to be afflicted with Stockholm Syndrome as far as the EU is concerned. He made sure the world’s media was watching…

The timing of the Bill was surely no accident – being introduced on the very day Michel Barnier arrived in London for another fruitless round of trade talks and the revelation that the EU had threatened to block exports of food and agricultural products from GB to Northern Ireland.

Politically, the introduction of the Internal Market Bill is a clear warning to Brussels to back off now if it still wants a free trade agreement and the Withdrawal Agreement to survive – because without a FTA, why on earth would the UK bother to keep the WA? It is hopelessly one-sided and the EU has already breached it, both in spirit and in the letter of the law.

One awaits the next move with interest. If the EU is so unwise as to go down the path of threatened retribution unless the Internal Market Bill is drafted according to its demands, a one-line Bill to revoke the Withdrawal Agreement in full, plus a short letter to Ursula von der Leyen announcing that we are leaving the treaty under the Vienna Convention, might look very attractive. After this week’s dictatorial posturing from Brussels, Boris’s Red Wall could very well vote for it. One cannot imagine their constituents meekly putting up with a government surrender.

So the question is: will the EU fall hook, line and sinker for the biggest Protocol political ploy of them all?

Caroline Bell is the pen-name of a civil servant who needs to remain anonymous.