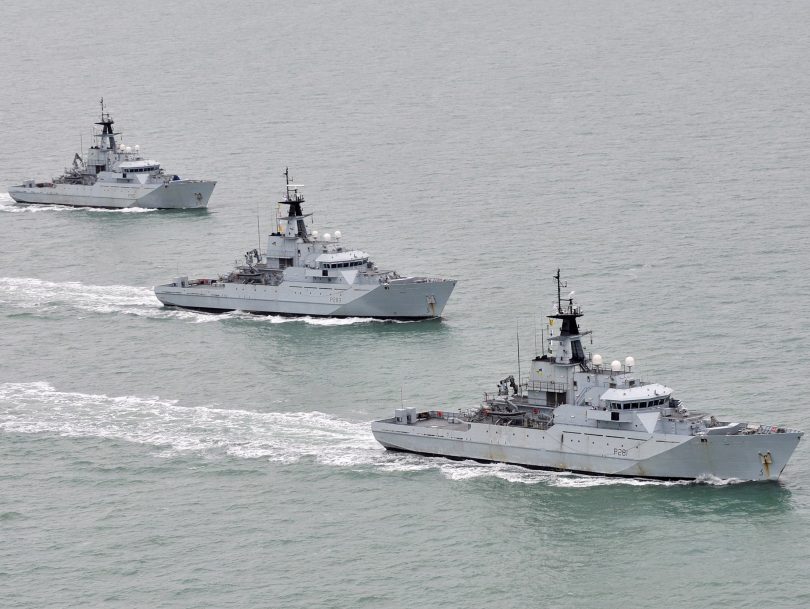 Professor Gwythian Prins asks ‘What is it “irresponsible” to do as we prepare to defend our territorial waters from New Year’s Day? He concludes that only by making detailed preparations to counter force we will maximise the chance that nothing will happen. This is the whole
point of deterrence.

The Royal Navy has announced that it has tasked four modern RIVER class Offshore Patrol Vessels (OPVs) to be ready to defend the waters of the UK’s 200 nm Exclusive Economic Zone (EEZ) against trespass by EU fishing boats when the “transition period” ends in a fortnight. The media unveiling of the RIVER class OPVs to the general public was greeted with cries of outrage from what Robert Tombs has aptly named ‘the remainer undead’ who simply will not lie down and who, rather than leaving on WTO terms, are currently pushing for a ‘deal’ – any ‘deal’ – which, given the EU’s consistent negotiating positions and conduct, would inevitably include unacceptable permanent compromise of UK sovereignty. The media bangs on about us sending ‘gunboats’ against French fishermen. But no-one there seems to be asking why our allies are considering invading our maritime territory.

Tobias Ellwood MP, the current Chairman of the House of Commons Defence Select Committee, no less, described the naval tasking and the announcement as “irresponsible.” The BBC made much of this, leading news bulletins. That caused the Secretary of State for Defence to enter the debate. He doubled down, both by reiterating the OPV tasking and by reminding that MoD had already conducted wider but unspecified contingency planning. Therefore, we must ask if it is this “irresponsible”? Or is it part of building a prudent deterrent signal? And if so, for whose eyes?

In an essay on Briefings for Britain in December 2019, I displayed at length the legal, tactical naval and historical contexts of this tasking for New Year’s Day. The Anglo-Icelandic ‘Cod Wars’ are central to the story. In that essay I explained that and how the UK’s de facto defeat by Iceland produced the silver lining of the 200nm EEZ concept in customary international law of the sea (UNCLOS) that has since translated into black letter law in many jurisdictions. The UK has profited greatly from this extension of sovereign control. Not least in oil and gas extraction.  It was a special sort of Waterloo. In the words of some world-famous Scandinavians – I feel like I win when I lose.

Our entry into the EEC, however, led to unqualified defeat. There was a surrender of sovereign control in any common sense understanding of the word because UK waters became ‘community assets’; and the consequence over the period of membership has been the decimation of the littoral and middle-distance national fleets after the Icelandic victory led to decimation of the long-distance deep water trawling fleet. These are matters of historical fact and they are not in dispute. Some have suggested that the sacrifice of British fishing livelihoods and vessels was not part of the price of Edward Heath’s policy of entry which, after President de Gaulle’s wise vetoes, unfortunately eventually succeeded. But that is wrong. The history of UK accession is well known. Some have recently suggested that the Chancellor of the Duchy of Lancaster is wrong to describe the current moment as one of recovery of control over our territorial waters within the EEZ. That is wrong too.  The June 2016 vote to recover full sovereignty is not difficult to understand and it covers our territorial waters – of course.

It is noteworthy that in recent days both Ursula von der Leyen and assorted French and Belgian politicians have begun to speak of a right of access to British fisheries acquired by custom from the last four decades of the suppression of British sovereignty by the concept of ‘community asset’.  Furthermore, creative legal ferreting is beginning to turn up claims from centuries old precedent.  The Belgians are waving the ‘Fisheries Privilege’ of 1666 granted by Charles II in gratitude for his refuge during the time of the Commonwealth, to claim ‘eternal right’ for fifty Bruges fishing-boats so that twenty-first century Britain may be “bound in with shame, with inky blots and rotten parchment bonds.” I take this as a sign of desperation and source of amusement rather than likely enforceable claims.

As to the prospect of deterring infringement of UK sovereign waters by French artisan fishermen or Dutch super-trawlers after 1/1/21, my essay in December 2019 discussed the naval deterrence requirements in some detail. The Cod Wars position is almost precisely reversed today. The Icelandic Coastguard fielded four hull-strengthened patrol boats named after the Norse Gods. We have so far declared tasking of four River class OPVs.

Given the importance which France attaches to our humiliation and punishment on leaving the EU, for reasons which have nothing to do with fish but with much bigger psycho-dramatic issues that Robert Tombs and ‘Caroline Bell’ have recently explained in full detail, a reasonable expectation must be that the French will use their navy, which is the second most capable in Europe after the Royal Navy, to do just what we did in the Cod Wars. That is to provide naval escort to French (or Union) fishing boats in fishing ‘boxes’ just as we did with ‘Spearmint’, ‘Butterscotch’ and the other sweet-toothed code-names for fishing boxes in Icelandic waters, with the express aim of over-matching – and thus paralysing – the currently declared OPV force. This requires French use of the Gendarmerie Maritime of course but, I would certainly expect, back-stopped by units of the MF FAN (Force d’Action Navale), ie full-size warships: frigates.

Of course, I am not sighted on RN plans at whose existence the Secretary of State hinted. But on that worst case planning assumption for credible deterrence of possible French miscalculations of our resolve, we need by 1/1/21 to have in place a credible ‘surge’ capability, ready to be deployed to accomplish three inter-linked tasks additional to OPV patrolling.

The first is aerial reconnaissance. Theresa May ordered the suspension of fisheries air patrolling which therefore needs to be resumed. That means ‘layered’ surveillance: wide area police patrolling by the new Poseidon MRA1 (P8A) long range maritime patrol aircraft combined with lighter manned Coastguard aircraft and unmanned Reaper MQ9A reconnaissance drones of the RAF. The second is an ability to field Royal Marine and Special Boat Service boarding parties that can be vectored onto miscreant vessels by the air reconnaissance units. They must be embarked on ships in sufficient number along picket lines of the EEZ from which they can swiftly interdict trespassing fishing boats by fast-roping from helicopters or boarding from fast RIBs (Rigid Inflatable Boats).  These two elements give teeth to the interceptor and escort role that, un-reinforced, is the limit of what the OPVs can do. The third is different. It is the ability to ‘ride off’ French escorts just as the Icelandic Coastguard ‘rode off’ RN frigates. ‘Riding off’ carries a risk of collision.

Our modern warships, including the RIVER OPVs, are vastly more complex and, paradoxically, fragile than the frigates of decades ago, as, by the same token, are the current generation of French warships. Therefore collision, let alone ramming, is more costly and hence a more potent deterrent threat: if you think it could happen you won’t risk your high value assets.

In the Cod Wars we used ocean-going tugs to excellent effect, including a chartered American vessel, ‘Statesman’ that was taken onto the British register for the duration. Today such vessels have the high shaft horse-power, sea-keeping, endurance and hull strength for the ‘riding off’ role. Also, if necessary, for cutting away trawls. Plainly we would not hazard our few and thin-skinned Type 23s or even MCMVs (Mine Counter Measures Vessels). A threat to ‘ride off’ with such vessels would not be as credible as one with ships, like heavy tugs, fit for the task.

Such contingency planning comes down to firmness of political will. On this, we have to ignore the blown spume of daily gossip and rumour and carefully study the deeper ocean currents of politics during this febrile year. Ever since the Prime Minister’s lapidary speech of 3rd February 2020 in the carefully chosen venue of Thornhill’s great Painted Hall of the once (and future?) Royal Naval College at Greenwich, which was reinforced later that month, on 18th February at L’Université Libre de Bruxelles, by Lord Frost’s equally clear and philosophically informed speech, I have seen consistent evidence that the government does have the will and has had it to the fore for many months for those who would see it. What we have not seen yet is special project funding for these ‘surge’ preparations. I and others have urged Ministers and senior officers to make these vital investments in deterrence, and I hope that by now they are in place behind the curtain.

Therefore, I would be rather surprised if the necessary plans, charters, STUFT (Ships Taken Up From Trade) warning notices etc have not been thought through. As the end of the year approaches, I expect that more of these preparations will be unveiled. For the unveiling of plans and capabilities in an essential part of credible deterrence.

All this is not to say that our government is well joined-up at present. The decision by some MoD official to ‘pause’ activities by the Royal Naval Reserve for nugatory financial saving ‘in year’ just at a moment when the RNR will probably need to be called up is simply stupid and also self-harming.  Unfortunately, we know of senior (named) MoD officials who have always opposed Brexit with passion, who have form in such matters.

This time we face principally our sweet enemy, the French. And we are who we are, namely the liberators of Europe within living memory. And the Royal Navy is not the Icelandic Coastguard, daring and successful as they were not long ago. It is the world’s first navy of the modern era: the Senior Service whose battle honours include the suppression of the Atlantic slave trade; and with good reason it celebrates Trafalgar Night each year. As long as we understand – really understand – all that, have pride and confidence in ourselves, understand and accept the visceral not to say despairing anger that drives Macron’s otherwise irrational position, then with adequately pre-planned deterrence we should be able to avoid direct actions this time: Si vis pacem para bellum (If you desire peace, prepare for war). They won’t try it on. It is the motto of the Royal Navy – and it is also true.

The most irresponsible and dangerous thing to do would be to hope for the best and to do nothing and to say nothing. On all of this, Mr Ellwood MP had it all back to front and the old sea dog Admiral Lord West, former First Sea Lord, with whom he was in conversation, expressed what any experienced royal naval officer knows in his bones to be true. Therefore, we may take comfort and believe that unveiling is in process. Yesterday saw the next move. On cue the curtain twitched. On 16th November the Maritime Enforcement Powers (Specification of the Royal Navy Police) Regulations 2020 were ‘made’ and on 17th they were laid before Parliament to come into force on 7/1/21.

Professor Prins is Emeritus Research Professor and the LSE and the Director of CSIRU – The Cambridge Security Initiative Research Unit.