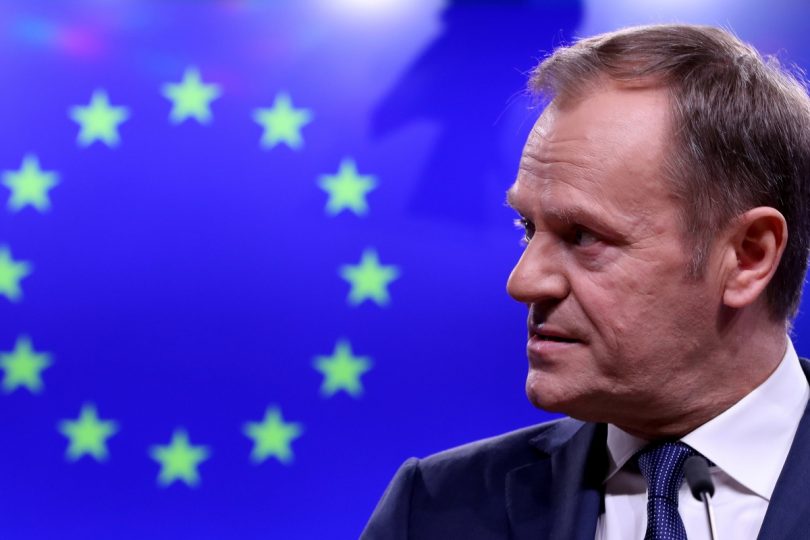 As he steps down after five years as President of the European Council, it is clear Donald Tusk still has no understanding as to why the UK voted to leave the EU. The yawning gap between the central institutions and the peoples of the member countries grows ever wider. The Remainers in this country either can’t or won’t say what “remaining” would mean for us in practice. They should be ceaselessly challenged on the point.

Donald Tusk, the immensely likeable, Anglophile, former Polish Prime Minister,  who in his younger days, as a disciple of Lech Walesa,  helped welcome Mrs Thatcher to Gdansk shortly before the fall of the Berlin Wall, is stepping down after five years as President of the European Council.

On November 13, at the College of Europe in Bruges,  he delivered a deliciously profound, concise and witty farewell speech.  It has received in this country nothing like the attention which it deserves. The speech illustrates to perfection why we just do not belong any more on the inside to what the EU has become;  and why we should revert to our default position in relation to any elaborate continental construct: namely close and friendly co-operation from outside – “semi-detached”, as Clement Attlee so aptly put it.

Donald Tusks’ message for us

The notion at (i) is illusory.  As Schuman and Monnet were well aware,  the European Project would never have got off the ground,  had it not been for generous American and Canadian support for European post was recovery and protection in the form of  NATO.

They were equally well aware of the need for continuing US support. The 70th anniversary next year of the Schuman Declaration,  coinciding as it does with the 75th anniversary of the end of World War II and of the launch of the United Nations, will be a salutary reminder of the realities.

France of the Fourth Republic had no hang-ups about the scale and scope of US power.  As from 1958,  France of de Gaulle’s Fifth Republic has had plenty of them, and they are by no means extinguished.

As regards (ii),  inward looking preoccupation with the safeguarding of it own “unity” against a host of threats indicates a vulnerability which is a far cry from what Schuman and Monnet envisaged as the “indispensable” role of “an organised and living Europe”; “audacious”; and making “creative efforts proportionate to the dangers which threaten world peace”.

We see in the Tusk speech the fell influence of those same bureaucratic and dessicating trends which over the years have eroded the “community spirit”,  l’esprit communautaire,  which Schuman and Monnet recognised as the essential complement to l’acquis communutaire, the ever-growing body of community law and process.

Tusk emphasises the role of the EU as one of the “occupiers of the main battlefield”,  along with the United States and China (Russia,  oddly,  is not mentioned in this category) from which the UK would naturally exclude itself by leaving the EU.  But you can’t be a great player on the world scene if your first priority is to protect your own unity against threats,  be they internal or external.

As for (iii),  our continental neighbours have been prone to underestimate us for at least the last four hundred years,  eg the Armada in 1588,  and – within my lifetime – in the dark days of 1940-41.  One should hesitate before offering any overall explanation for this phenomenon;  but we could be said to be slow both to recognise dangers which beset us,  and to organise appropriate reaction to counter them.  The result of the 2016 Referendum is a spectacular case in point.

In announcing the Referendum,  and arguing in favour of remaining in the EU,  David Cameron said “Whatever the British people decide,  I will make it work to the best f my abilities”.  He in fact resigned immediately the result was known.

The national administrative apparatus,  having made no contingency plans worth the name,  had to start effectively from scratch,  under the uncertain direction of a new prime minister sadly lacking in not a few of the qualities necessary to master a very demanding situation,  and whose heart was never really in the job.

The period of nine months which elapsed after the Referendum before Mrs May “triggered” the withdrawal process with her letter of March 29, 2017 to Donald, Tusk bore an eerie resemblance to the “phoney war” of 1939-40.  It undoubtedly had the effect of strengthening the conviction of a great part of the Establishment that the result of the Referendum was “wrong”, and should be reversed.

Mrs May’s letter of March 29 2017 was eminently forthcoming,  open-minded and constructive.  The response,  in the shape of the Guidelines adopted on April 29 , 2017,  by the “European Council (Art 50)”,  i.e. without the UK,  was appalling: in its negative introspection and general perversity,  it is without precedent in the annals of democratic multilateral negotiation.

Any hope that the negotiations could be conducted in a positive-sum spirit was extinguished on that day.

The prospects for a mutually acceptable outcome,  never very bright,  dwindled notably during the course of the laborious process required by the EU Guidelines,  as and in spite of Mrs May’s increasingly desperate efforts to find accommodation. The earlier slogan “a bad deal is worse than no deal” weakened de facto into “a deal at any price”:  namely the Withdrawal Agreement,  foolishly accepted by the UK side in November 2018.  At this point the House of Commons made it clear that they were not having any. The impasse was inescapable.

As part of her forlorn quest, Mrs May sought two extensions of the negotiating period.  The European Council agreed, subject to a proviso as unhelpful and obstructive as the Guidelines.  The second sentence of the conclusions of the Special European Council (Art 50) on April 10 reads as follows: “They (the EU27 leaders) agreed to an extension (until October 31) to allow for the ratification of the withdrawal agreement” (in bold).

The EU at its worst

That means that,  having seen a British Prime Minister sacrifice herself in a vain attempt to satisfy their obduracy,  our partners nevertheless continued to insist that there was no alternative to our embracing unchanged the inequitable,  illogical and illegal Withdrawal Agreement,  although it had already been rejected three times by the House of Commons.

Without apparently realising it, the EU had painted themselves into a corner.

Unless the UK weakened,  and agreed to what it had thrice rejected,  the terms of Article 50 dictated that “the treaties would cease to apply” to us after October 31.  that is, we would be ejected: we would be “crashed out”. (i.e. we would not ourselves “crash out”. If the notion of “crashing out” is introduced into the debate,  the Passive,  rather than the Active, Voice applies.)   That is not what our partners wanted.

Although it was an article of faith among them that the UK would suffer more than they would from a no-deal departure, the realisation was dawning on them (a) that this would not deter Mrs May’s most likely successor from leaving without a deal if necessary; and (b) in fact the EU could ill afford such an outcome.  Someone had to come to their rescue.

And the House of Commons at its worst

By the time Boris Johnson entered No 10 Downing Street on July 24,  the House of Commons,  under the sway of the least impartial and most histrionic Speaker of modern times,  had plumbed new depths of discord,  unseemliness and bitterness.

The Remainers,  in spite of having undertaken in their vast majority, at the time of the 2017 election,  to respect the verdict of the 2016 Referendum,  now appeared in their true colours.  Their first priority was to stop “the catastrophe” of a no-deal outcome on October 31.  They resorted to the grotesque device of the Benn Act,  which obliged the Prime Minister to seek,  by means of a letter in specified terms to the President of the European Council,  a three months’ extension in the absence of an agreement being reached by October 19.

By mid-October however, a sense of proportion was beginning to return to our national perceptions.  Enough was enough.  One cannot go on shouting “Fire!” indefinitely.  It starts to lack credibility. It became clearer day by day that the worst was not happening.  A “catastrophic” no-deal seemed less and less likely.

The Prime Minister did the supposedly impossible by re-opening the Withdrawal Agreement, and ensuring the removal of the backstop.  Even the House of Commons showed itself ready to consider the revised deal which he had secured.  MPs also recognised that a general election could no longer be delayed.  It was called for December 12.

Back to the people

One of the great Remainer slogans for months past has been “let the people decide” ,i.e.  “now that they know better, they will vote the way we want them to”, via a “confirmatory” vote,  or a “people’s vote” or a second referendum.  The general election campaign is impressing on them that that is a miscalculation.  As a result, the Remainers appear to be flying around in ever-decreasing circles.

The voters are not stupid. They know perfectly well that the antics of the last Parliament were much more in pursuit of the interests of Remainers than out of respect for the verdict of the 2016 referendum.  Their overwhelming desire is to be rid of Brexit, and move on to deal with all the other pressing issues which we face.  “Get Brexit done” is a far more attractive watchword.

And we should never cease to demand from Remainers exactly what “remain” means to them—something that in their frequent media appearances they are rarely if ever asked.  The fact of the matter is no-one knows. The Remainers are either trying to hide the truth from us, or trying to hide from it themselves.  Either way they are playing us false. The European Court of Justice says only that if we revoked our notification to withdraw, the terms of our membership would be unchanged, as regards its status as a member state.  Much else would be at the pleasure of the other member states.

Peter Marshall is a leading expert on multilateral diplomacy. After a career in the British Diplomatic Service, he became Commonwealth Deputy Secretary-General.