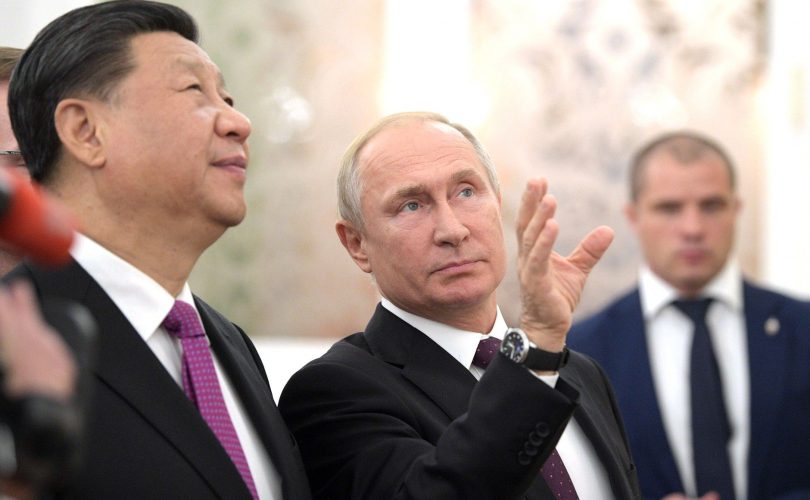 Frank Millard explains Putin’s invasion of Ukraine in terms of access to gas-fields and of the geo-strategic importance of the Black Sea. He regards negotiations as essential in ending the conflict

When the war in Ukraine began, the public sought to make sense of it according to information it received from the media and politicians. In the fog of war, what was right and wrong would have seemed straightforward enough in Moscow, Washington, Beijing or London.

Vladimir Putin stated his reasons for recognising the breakaway Donbas republics and expressed his concerns about the expansion of NATO, but underlying reasons are often more complex than the narratives presented, including that of an ‘evil’ Vladimir Putin, hated in much the same way as Emanuel Goldstein in 1984, versus the ‘saintly’ and heroic resistance of Volodymyr Zelenskyy. A powerful country had invaded its weaker neighbour without good reason certainly. However, perspectives matter.

Putin had prided himself on balancing different Russian interests enabling the country to recover from the chaos following the fall of the Soviet Union and restoring much of its superpower status. To throw that away in a few days was completely out of character, suggesting that something more of a security risk to Russia or him personally than concerns about NATO had pushed him over the edge.

Although Russia has an economy around ten times that of Ukraine, between 2015 and 2020 Ukraine’s GDP grew by 70.8% whereas Russia’s only grew by 8.8%. Meanwhile, Russia’s exports are extremely vulnerable to fluctuations in commodity prices, which suffered through the pandemic in particular.

Ukraine’s economy was hurt by the war in the Donbas from 2014 and the loss of Crimea, but recovered quickly through reform and the expansion of foreign markets resulting in Russia being supplanted as its main trading partner as its main trading partner by the EU. In short, Russia can bear Ukraine as less than a friend but not as more of a competitor.

Quite apart from its abundance of grain, Ukraine boasts the third largest oil and gas reserves in Europe (after Russia and Norway), the majority of which can be found in the Dnipro-Donetsk basin in the East of the country. The Yuzivska gas field, estimated 70.8 trillion cubic feet and discovered in 2010, was expected go into production in 2017, but plans were shelved following the breakout of hostilities in the Donbas region in 2014 and is an area currently being fought over.

It is clear why agreement over the breakaway republics and Donbas more widely would be a sticking point in negotiations. It is not so much that they both want the Donbas gas, but that they want to deny it to the other side.

Denial has been an important element of Russian strategy – including (according to reports) the taking of agricultural equipment and grain and the disabling of port handling and storage. Denying the gas of the Donbas is all part of the same strategy.

The 250-mile-long Northern Crimean Canal from The Dnipro River into Crimea was blocked by the Ukrainians when the peninsular was annexed in 2014, but has now been reopened by Russian forces.

The timing of the invasion was important and may have had more to do with coal than NATO. European reliance on Russian gas reached a peak just prior to the invasion. Global consumption of natural gas has been growing Year on year despite climate policies and the impression that fossil fuels were on their way out. This is not just despite, but as a direct result of, the abandoning of coal as an energy source by Europe in particular, which included the closure of coal-fired power stations and mines, led to a surge in gas demand in 2019. This spike was followed by the pandemic, so it was the return to normal consumption following the lifting of restrictions that provided Russia a window of opportunity. The importance of coal may not have been lost on the UK Government, which may account for the first new deep mine opening for many years.

Russia has benefited from the rise in the price of gas and countries like Iran and Turkmenistan with some of the world’s most substantial gas reserves are in the Russia-China orbit while Qatar, once firmly attached to the West, has become increasingly economically and strategically aligned to Beijing. Iran, economically isolated by the West, has become a strategic opportunity for China and an ally of Russia in Syria and the Middle East.

Then there is Turkey. A member of NATO, which objects to Sweden or Finland joining NATO and is dependent on Russian gas and grain and Chinese investment. The country’s economy has been going from strength to strength and is now Europe’s sixth largest economy. Forecasts suggest it could become the world’s 12th largest economy by 2030. A gateway for the belt and road rail links to Europe, like Qatar, it is a front line between West and East. Its role as host of peace talks is easily understandable in that context.

Black swans on the Black Sea

The Black Sea is of vital economic and geostrategic importance to Russia largely because it is Europe’s commodities lake. Novorossiysk, is Russia’s largest Black-sea port, located on its North-East coastline only 106 miles from Kerch in the Crimea.

The problem for Russia is that of the countries that have a Black Sea coastline two are EU and NATO members and the others, including Ukraine, aspire to join them as soon as they are able, leaving it as the only non-EU Black Sea state.

Georgia, for example, with whom Russia had a bitter war, not only intends to join the EU, but has received EU funding to expand its main deep-sea port Anaklia as a pivotal Eurasian trade link bypassing Russia. Further South, its ports of Poti and Batumi are also expanding with new infrastructure receiving international investment.

Turkey hosts the sea’s only gateway to European waters through the Bosphorus straight, under which the Marmaray subsea rail tunnel runs into Bulgaria from the East as part of a Belt and Road line that will soon connect Beijing and Paris directly. Its importance to both Europe and Asia cannot be overstated.

The Black Sea is also rich in offshore fossil fuel reserves off Ukraine, Romania and Turkey. In August 2020, Turkey found 320 billion cubic metres (11 trillion cubic feet) of natural gas in the Black Sea, and intends to begin production in 2023. Meanwhile, Black Sea Oil and Gas (BSOG) is due to commence production off the coast of Romania this month. Romania has been heralded as a potential European energy powerhouse (New York Times) with its abundance of nuclear power stations, presently expanding with US investment with modular technology, plus the second-largest producer of electricity in the country after fossil fuels, hydro-electric power stations, such as the Iron Gate dam (Porțile de Fier) on the Danube between Romania and Serbia.

The result of Russia responding to its fears with aggression has, on the face of it, meant the acceleration of the realisation of those fears. However, Russian concerns have not been confined to the predictable activities of the West, but also the less predictable steamroller in the East, China.

A virtual Berlin Wall appears to have been rebuilt, behind which suspicions abide and the Cold War can be reinvented by both sides. The West’s ‘decline’ has involved a deconstruction of itself and its traditional understanding of civilisation along with it. During the Cold War it had a defined self-image, but now it is forced to either face the complexities of the real world or invent something else.

What would victory look like to East or West if it were even possible? There are those in the West demanding complete victory, but a vanquished enemy would remain dangerous and remain an enemy. Insults and demands for more action may look good on social media, but throwing stones builds no bridges. A negotiated settlement is the only way a ceasefire and enduring peace can be achieved and re-establish workable international relationships. It being vital that those international relationships and balance are restored.

NATO Secretary General Jens Stoltenberg hinted, at the Kultaranta Talks in Finland on 12 June, that although NATO could help strengthen Ukraine’s position at the negotiating table, it would need to some territorial concessions as its price for peace. “Peace is possible,” he said. “The only question is what price are you willing to pay for peace? How much territory, how much independence, how much sovereignty?”

Macron was right when he said Russia should not be humiliated. If the West is successful in defeating Putin, it must be very careful not to appear to defeat Russia as well. It made that mistake after the collapse of the Soviet Union, which is why we are where we are now. Even under a new leader, Russia would still need its security and self-respect. Only treaties, forbearance and trade can help achieve real victory. History is not a chronicle of inevitability but choice.

Putin needs the whole of the Donetsk region and its gas fields to deny it to Zelensky, not just that occupied by pro-Russian forces prior to his invasion. First, though, he needs to acquire it by force before returning to the negotiating table. Next, he needs an ally in the Black Sea region, or fewer enemies at least.

Dr Frank Millard is a historian and print/TV journalist with an abiding interest in history, art, literature, world politics and the beautiful English countryside.