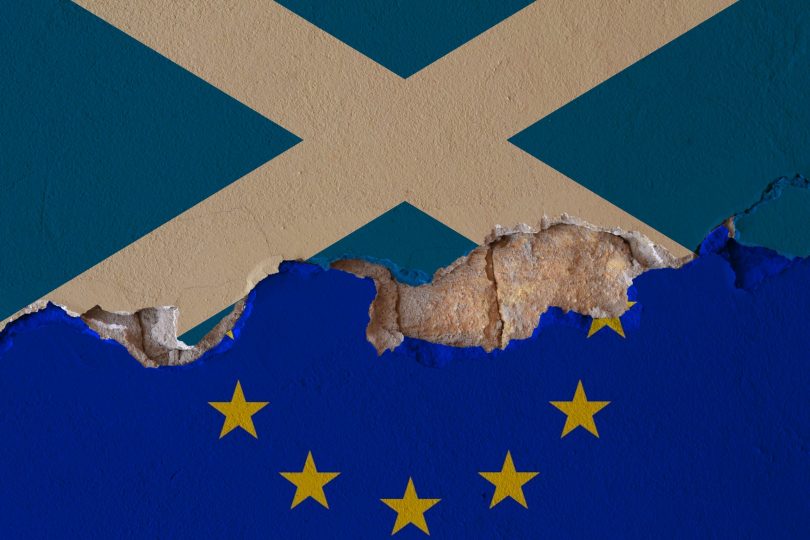 The Scottish National Party wants independence from the United Kingdom. In addition to the extensive powers it has under the devolution settlement, it wants Scottish control of foreign, defence, and macroeconomic policy – in particular, relating to currency, interest rates, borrowing, taxation and spending.

The reality is, of course, that the SNP does not want independence. Instead it wants to leave the UK in order to join the European Union as an ‘independent’ member state, along with the other 27 ‘independent’ members states. The problem with that, however, is that the EU has plans to take over control of foreign, defence and macroeconomic policy from the member states, leaving Scotland with even less effective independence than it has currently as part of the UK.  This, in part, is because Scotland would have just 6 MEPs (out of 705) in Brussels compared with 59 MPs (out of 650) at Westminster.

Since the SNP is so keen on joining the EU and abiding by EU rules, let’s look at what Scottish ‘independence’ would look like when playing by EU rules.

We know what these are, since they would be the same as (or worse than) the ones that applied to the UK’s departure from the EU and contained in the Divorce Bill (or Financial Settlement),[1] the Withdrawal Agreement[2] (including the Northern Ireland Protocol, NIP[3]) and the UK-EU Trade and Cooperation Agreement (TCA).[4]

The key point is that Scotland would be leaving the UK club – just as the UK left the EU club.  Let’s use Scotland’s population of around 8% of the total UK population to determine the Scotland’s share of assets and liabilities.

As the EU made clear, when you leave a club, all the tangible assets remain with the club.  This includes military assets and embassies, for example.

In addition, Scotland would have to agree to the following:

Scotland would, like Ireland, be required not to participate in the Schengen Agreement which allows the free movement of EU citizens between member states.  Joining Schengen will immediately result in a full land border between the UK and Scotland, with passports and customs checks for all people wanting to enter the UK from Scotland.

In terms of trade, in order to keep the land border open and to avoid tariffs, Scotland would have to agree to stay in the UK Single Market and Customs Union. The UK regulation of goods (including food products and medicines) would be incorporated into domestic Scottish law. Scotland would have to agree to maintain dynamic alignment with UK regulations of goods as they change over time. The UK Supreme Court would have jurisdiction over the regulation of Scotland’s goods market. UK State aid law would apply in Scotland in so far as it may affect trade between the UK and Scotland. Scotland would remain within the UK’s single VAT area.

The UK would not provide a land bridge for goods moving between Scotland the EU and vice versa, because of the risk that Scottish soil on the tyres of vehicles entering the UK could contaminate UK soil. All goods destined for the EU would have to go by ship from Scottish ports.

What are the costs of these measures to Scotland?  A study by the European Research Group in February 2021 outlined the costs incurred in Northern Ireland since 1 January 2021 due to the NIP and similar costs will apply in the case of Scotland:[5]

“if we have a blow out, fridge breaks down en route to the boat and have to change trailer then we have to go back to the start and do the declaration… all over again…. We have two extra people downstairs to help with admin and load wise we are probably 70% less busy than last week.”

Scottish financial services would not be recognised as ‘equivalent’ and hence would not be permitted to be sold in the UK because of the threat to the financial stability of the UK.  Providers would have to set up separately capitalised companies in the UK.

UK financial service providers (such as mortgage providers) would not be permitted to offer these services to Scottish citizens.

Scotland would have to introduce its own currency on Independence Day.  If it were introduced at par with sterling, it is conceivable that it could fall in value by around 15% (the same fall as sterling the day after the UK Referendum in 2016).  Scottish citizens with existing liabilities denominated in sterling (such as the 800,000 with mortgages) could then see these liabilities increase by 15%.

Scotland could, of course, switch from sterling directly into the euro in preparation for joining the EU. However, only 18% of Scots want to join the euro.[6] The requirement of an EU member state to adopt the euro is enshrined in the Maastricht Treaty and all new member states must do so.

However, First Minister Nicola Sturgeon has previously rejected this. Tobias Locke, professor of law at the National University of Ireland Maynooth, has warned that if Scottish politicians were ‘too vocal about their non-commitment to taking such a step, there is a danger that the EU might in the end not agree to Scottish membership’. Further Philippe Lamberts MEP reconfirmed that Scotland would have to commit to its adoption and believes that Ms Sturgeon will change her mind on the issue.[7]

In any case, the idea that you are so desperate to join a club that you fly that club’s flag outside your front door, but then refuse to pay your membership fees using the club’s own currency is surely an unforgivable insult to the club.

The economic cost to Scotland

A study by the London School of Economics recently estimated the trade costs of Scottish independence.[10] It assumes that independence will increase trade costs between Scotland and the RUK by between 15% and 30%, depending on the size of the border costs.  It predicts that Scotland’s long-run real income per capita will fall by between 4.5% and 6.7%, or by between £1,385 and £2,155 per person.[11]  This means that the Scottish economy could shrink by £11bn a year if the country breaks away from the UK. This is the pure border-cost effect.

The loss of Barnett formula[12] fiscal transfers from the rest of the UK would be additional. Fiscal transfers to Scotland for 2021-22 will be £38bn. Scotland’s public spending is £81bn, while £66bn in taxes are collected in Scotland, including those on North Sea oil revenues.[13]  This implies that there will be a net reduction in Gross Domestic Product (GDP) of £15bn due to the loss of fiscal transfers.

An independent Scotland would also need to cut public spending or raise taxes to compensate for the loss of Barnett funding. It has been estimated that to continue the current level of government spending after independence, the basic rate of income tax in Scotland would have to increase from 20% to 46% or the standard VAT rate would have to increase from 20% to 49%.[15]

With only a little exaggeration, this is the reality of Scottish independence ‒ under EU rules.  The SNP are deluded if they think there will be a smooth transition from being part of the UK to being part of the EU.  And they are just as deluded if they believe there is some form of Free Trade Agreement that will allow frictionless trade between Scotland and the UK as well as frictionless trade between Scotland and the EU – as Northern Ireland has clearly demonstrated. Precisely the same will happen between Scotland and the RUK. There is no ‘best of both worlds’ solution as Nicola Sturgeon repeatedly suggests. Time for a very big reality check.

A follow-up article ‘The Fantasy Economics behind the case for Scottish independence’ is here.

[5] European Research Group (2021) Re-uniting the Kingdom:  How and why to replace the Northern Ireland Protocol, February; https://www.telegraph.co.uk/politics/2021/02/24/northern-ireland-protocol-must-abolished-rather-tweaked-demands/

[11] This is the pure Scexit effect, excluding the Brexit effect which is also modelled in the LSE study.

[12] The Barnett formula is used by the UK Treasury to calculate the annual block grants for the Scottish government, Welsh government and Northern Ireland executive; https://www.instituteforgovernment.org.uk/explainers/barnett-formula