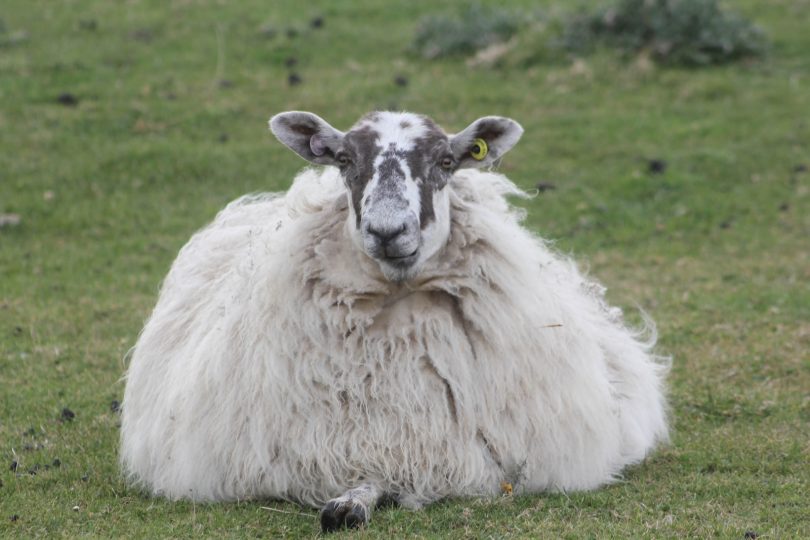 Catherine McBride argues that most agricultural activities in the UK are profitable and should be allowed to compete with Australia, tariff-free. Most lowland and hill grazing farms however lose money and are sustained by subsidies. A trade agreement with Australia should not be fettered by a desire to protect these loss-making businesses

Australian products will not be in competition with the UK’s most profitable farming sectors: Dairy, Poultry, General Cropping, pigs, or horticulture. In fact, for these sectors Australia could become a new market for UK products.

However, this won’t happen if the government doesn’t stand up to failing farms that would have gone out of business years ago if it were not for the enforced generosity of UK taxpayers. It would be a classic case of throwing good money after bad if the Government were to give these failing farms any more protection. Coddling loss-making farmers for years has not helped them improve their productivity, it has only made them complacent.

Farm Finance in the UK

Not all UK farms make a loss, many are highly profitable. But the highly profitable farms are not demanding protection – it is loss making farms that are doing this. Giving in to these protectionist’s demands would be a political misstep for the Government, turning any trade dividends from Brexit into a distant mirage while improving the hand of the re-joiner campaign.

The two sectors calling out for protection, Lowland and Less Favoured Area (LFA) Grazing, made a loss on average on their agricultural income last year. Although, agricultural income is very dependent on commodity prices, this loss was not unusual. According to DEFRA’s farm business income reports over the past seven years: every year, both Lowland and Less Favoured Area (LFA) grazing in the UK have made a loss on their agricultural business.

It is hard to justify protecting UK graziers from Australian beef imports, when UK graziers are routinely loss-making unlike dairy, poultry, pig, horticulture and general cropping farms, and these farm could benefit from a trade deal with Australia.

Farm Business Income (FBI) is made up of: Agricultural Income; Income from diverse sources; Basic Payment subsidies; and Agri-environment subsidies. The profitability of UK farming varies enormously by sector. With Dairy farms and specialist poultry the most profitable sectors and Lowland and LFA grazing the least.

Clever farmers will diversifying their incomes by renting out cottages on their land, setting up farm shops, or making value-added products. This income is usually less variable than agricultural commodity-based income. The combination of agricultural income and diversified income over the last seven years is shown in the table below. But again, it is the UK’s grazing farms that are making a loss, year after year, with one exception for Lowland farms in 2017/18. 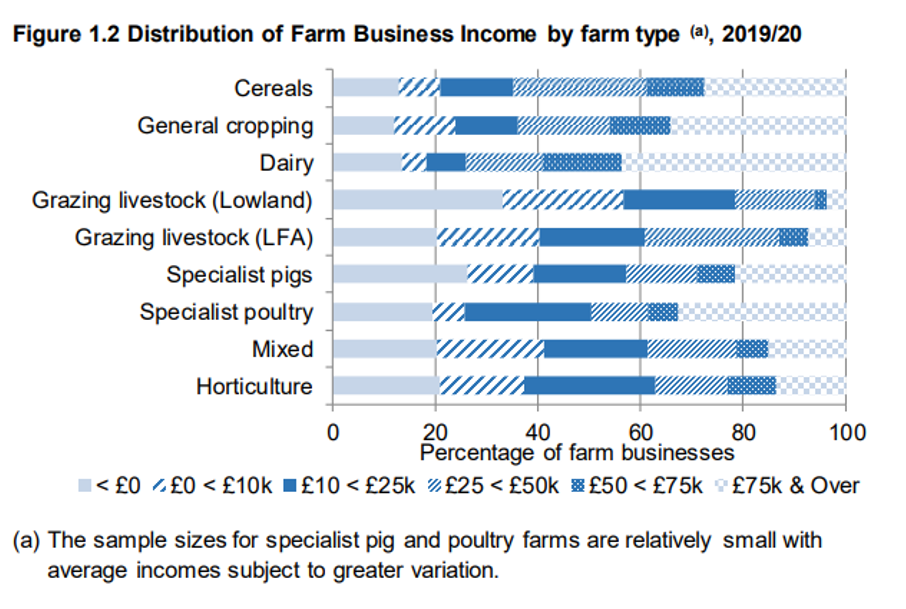 This was not a one-off situation due to some extraordinary event. Over the last seven years, the percentage of lowland grazing farms making a loss has averaged 24% and ranged from 16% to 33% of farms. Similarly on average, 24% of LFA grazing farms made a loss over the last seven years, ranging from 19% to 33% of farms, even though LFA farms receive higher Basic Payment subsidies per hectare due to their poor-quality land.

At the other end of the profitability scale, dairy farms, specialist poultry and general cropping have the greatest proportion of farms making over £75,000 from FBI. Over the past seven years, on average 42% of dairy farms made more than £75,000, 32% of specialist poultry farms and 29% of general cropping farms. The proportion of Dairy farms making over £75,000 has never been lower than 25% and has been as high as 63%.

This result is unsurprising. All three of these sectors are capital intensive, highly automated, require specialist machinery and tend to require employment of outside staff. They are often run as large-scale businesses rather than as family farms sometimes with professional managerial staff as well.

Dairy, poultry, and general crop farming suits the UK and allows it to play to its strengths: they do not require large amounts of land; in the case of perishable dairy products and fresh chicken meat, they benefit from the UK’s small size and short distances to retail markets; they are both capital intensive and labour intensive – both inputs are readily available in the UK. The feared exodus of farm workers after Brexit failed to materialise. Instead, over five million EU nationals have applied for settled status.

Dairy, poultry, and general cropping are the type of farms that the UK should be encouraging. Not just to supply domestic markets but to export their non-perishable products internationally. Specialist pig farming and horticulture should also be included in this category. Both are profitable from their agriculture and diversified income, and horticulture receives very little government assistance. Which may well be the cause of its profitability.

However, it is glaringly obvious that the UK no longer has a comparative advantage in grazing. Yes, the UK did develop many of the world’s best beef breeds but meat production, outside of wagyu beef, is now focused on economies of scale. And refrigerated shipping allows meat to be imported from larger, more distant countries.

Cattle and sheep farmed for their meat or wool do not require the daily labour of dairy cows although there are intensive periods during shearing, dipping, branding or drenching. In countries with a temperate climate, there is less anxiety about lambing in freezing temperature as there can be in parts of the UK. Nor do farmers in temperate climates need expensive barns to house their animals in winter.  And in the case of beef: the meat improves with age, so it does not need to be close to its eventual retail market.

Although the government is planning to pay out all farmers to retire, I would like to suggest that they concentrate on one sector of the industry – grazing, and look for ways that UK grazing farms can be converted to more profitable sectors or the farms amalgamated so that they can compete with farms in Australia, the US, Brazil, Uruguay, Argentina and even India.

But the UK farmers shouldn’t fear Australia, it is the perfect symbiotic agricultural trading partner. Successful trade agreements require specialisation, where countries buy from each other what they cannot produce efficiently themselves. If a commodity must be subsided to break even, then it is not being produced efficiently.

Unlike the UK, Australia has a natural advantage in grazing land and the majority of Australian farmland is used for grazing. But it will take time to build up Australian herds to cater for the UK. Beef cattle have single births and every heifer held back from market to increase the herd size is forgone income.

Despite Daily Mail hysteria, the majority of beef produced in Australia is hormone free. While the beef that is treated with hormone implants is strictly monitored by the Australian Pesticides and Veterinary Medicine Authority (APVMA). As beef is a major export industry for Australia and it sells beef to markets that prefer lean, hormone treated beef, such as South Korea; to markets that allow it but prefer marbled-fat meat, such as Japan; as well as markets that don’t accept it, such as China, so the use of hormone implants is effectively monitored and recorded.

Australian beef farmers can produce beef at a lower cost than the UK due to their greater economies of scale. They have larger farms, lower land costs, greater land availability and a relatively cheaper currency. While the difference in manpower needed to run a herd of a thousand animals is not much greater than for a herd of a hundred.

Although, Australian cereal crops also benefit from large farms sizes, they have an opposite season to the UK so they don’t increase the supply in competition with UK crops, suppressing the price as other northern hemisphere production does.

On the other hand, the UK benefits from economies of scale in food and drink manufacturing due to its larger population and short distances to retail markets. This is perfect for value added food and drink manufacturing such as the enterprising UK farmer who vertically integrated his potato farm by making Vodka, other potato farmers now make artisan potato crisps and obviously, the UK’s whisky industry adds considerable value to the UK’s barley production.

The hysterical NFU president is demanding that the government protect British family farms from competition, but government policy is to encourage them to retire and sell or pass on their farms, stripped of its annual subsidies, to the next generation of farmers. It is likely that ‘the next generation of farmers’ will be professional agricultural companies that will amalgamate farms into more productive unit sizes, not family farmers.

The UK’s unprofitable farms may not go out of business this year, but their demise is only a matter of time unless they change their products, mechanise, or consolidate their farms. This type of restructuring has happened in every other industry in the UK. It is time for UK farming to follow suit.

The second part of DEFRA’s proposal this week is to de-couple subsidies from farmland and instead reward farmland owners for sustainable food production and environmental improvements. However, this would enable even more UK farms to be inefficient and uncompetitive internationally.

I don’t have a problem with sustainable food production. Sustainable food would be a unique selling point and may even create a new luxury goods export industry, like high value scotch whisky. However, it would be madness to limit domestic production without first having signed trade agreements with several alternative suppliers. Without such trade agreements, this would leave UK consumers as a captive market for the EU’s mass-produced farm products or for the lab-grown meat-like substance industry.

It may seem counter intuitive but: increased market competition and the removal of all subsidies, would produce a much more vibrant agricultural sector than prolonging import protection. Both Australian and New Zealand farmers went through this process in the 19080s and 90s, and are proof that this can be done, and that is works. Both countries are still green and pleasant lands (well, Australia is more khaki) and both still have plenty of family run, but profitable, farms.