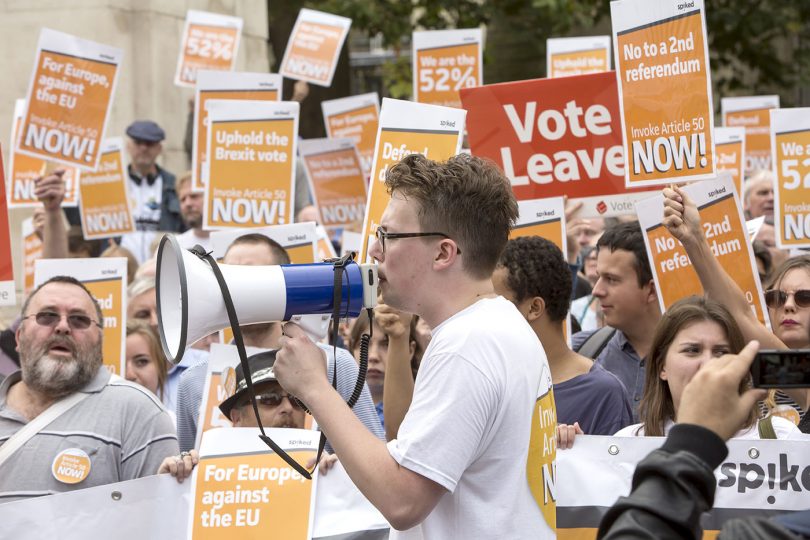 Jonathan Rutherford explains the academic background to recent accusations of leave voters as authoritarian populists.The negative framing of Leave voters exaggerates the difference between Leave and Remain voters in the country. It also reproduces the long-standing class condescension of the liberal intelligentsia. Claiming it to be science doesn’t alter the fact. Focusing on Leave voters has allowed the liberal intelligentsia to avoid addressing the ways in which its own interests, its increasing global mobility, support for high levels of immigration, and tendency to self-exemption from the ties of nation and place, have contributed to the growth of populism, and the vote to leave the EU.

A small and as yet unpublished study by researchers at Cambridge University has been given a significant amount of publicity by The Times, The Guardian and the University’s own research news site. It claims that Leave voters tend to be less creative and markedly worse at coping with change than those who supported remain[i]. They lack ‘cognitive flexibility’ and so are more likely to support authoritarian ideologies. They have ‘tight impermeable boundaries’ and consequently tend to gravitate toward a more ethnocentric, nationalist and socially conservative mindset. A spokesperson explained, ‘By connecting the realm of cognition with that of ideology, we find that flexibility of thought may have far-reaching consequences for social and political attitudes’[ii]

These kinds of negative descriptions of Leave voters have been ubiquitous in academic and political analysis, and media reporting. They are often the result of research that uses psychometric testing on individuals to explain their political and cultural values. The resulting correlations between personal behavior and political identification can be questionable.

On April 14, 2016 the BBC news ran the headline, ‘Around 50% “hold authoritarian views”.’ Three academics at Essex University had taken up the analysis of the authoritarian populism of Thatcherism and applied it to Brexit Britain. Their research, The Consequences of Authoritarian Populism in Britain, claimed that a remarkable half of the UK’s adult population could be described as authoritarian populists[iii]. These individuals favoured rolling back the state and were negative in their views about immigration, human rights, and the EU. None of these views are intrinsically authoritarian and yet in November the YouGov Cambridge Forum warned that authoritarian populism was shaping the future of Europe and could be the defining political phenomenon of the next decade.[iv] The 2017 British Social Attitudes report identified the Brexit result as reflecting the concerns of older ‘more “authoritarian” or social conservative voters’. It used a nineteen-item libertarianism-authoritarianism scale to measure attitudes, leading it to conclude that ‘72% of those with “authoritarian” views voted to leave compared to 21 % of those holding “libertarian” views’.[v]

In June, Chatham House published a report that identified a Europe divided along the liberal-authoritarian political spectrum.[vi] Authoritarianism was defined as a ‘set of preferences amongst voters that favours order, deference to authority and resistance to change’. The size and nature of the division was measured by a survey of attitudes toward the death penalty. The 21 per cent who supported the death penalty defined the ‘authoritarian minded’ who voted Leave.

The authors of The Consequences of Authoritarian Populism in Britain acknowledge that they think the proponents and supporters of populism are seen as morally repugnant. The term ‘Authoritarian Populism’ they claim is even worse. However, despite its negative connotations, they do not question the objectivity and validity of this descriptive category. Nor do they question the methodology that employs it, nor their own motivations for using it. They insist that their use of authoritarian populism is ‘politically neutral’ and that their research is a way of focusing on its ‘character, its sources and its consequences’. Their claim to objectivity however is compromised by their concluding remark: ‘We may not like Authoritarian Populists but they are here, now, in large numbers’.

The roots of this psychological research can be found in an influential book published in 1947 called The Authoritarian Personality. It was written by a group of academics at the University of California, Berkeley and based on their study of prejudice and anti-democratic tendencies amongst Americans. Variations of its methodology have been repeatedly used to explain the cause of the Leave vote as the dysfunctional psychological dispositions of Leave voters.

The Berkeley academics were joined by Theodor Adorno who had been a leading figure in the Frankfurt School of Marxist intellectuals. Adorno brought with him his work on the authoritarian personality and his ‘f-scale’ or pre-fascist personality scale which formed the methodology of the study and survey questionnaire. Along with Max Horkheimer his Frankfurt School colleague he had devised it in an attempt to explain the rise of Nazism.

The f-scale listed a set of psychological dimensions that could be measured in individuals.  For example: conformity to the traditional social norms and values of the middle class; submission to conventional norms and values and toward in-group authority figures; punishing and condemning individuals who don’t hold to conventional values; a rejection of inwardness, the subjective, the imaginative and of self-criticism. These amongst others were used in a psychometric test to identify a personality type. In a later essay Horkheimer summed up this personality type as a combination of submissiveness and coldness who defined the ‘potential fascist of our time’.[vii]

Adorno based his f-scale on Freudian psychoanalysis, in particular Freud’s 1921 essay on ‘Group Psychology and the Analysis of the Ego’. Traditional Freudian analysis is concerned with the individual psyche. It does not translate well when used to analyse collective and social processes. The result is a reductive and mechanistic view of the psychological interrelationship of the individual and society. The f-scale answers complex questions of social process, political identification and class interests by personality traits. In addition, it was biased. A simple agreement to any of its questions automatically signaled an authoritarian response. The social critic Christopher Lasch claimed Adorno’s f-scale simply associated mental health with being left wing and an authoritarian pathology with being right wing.

Despite these limitations, Adorno’s involvement led to an interest in authoritarian populism on the left. Stuart Hall used the concept in his seminal 1979 essay ‘The Great Moving Right Show’ to explain the ‘apparently irrational’ support which Thatcherism won for its attacks on the working class. ‘What we have to explain’, he wrote, ‘is a move toward authoritarian populism – an exceptional form of the capitalist state – which unlike classical fascism, has retained most (though not all) of the formal representative institutions in place.’[viii] In a critical response to Hall, Bob Jessop and three colleagues warned of the ambiguous meaning of authoritarian populism. Regardless of it firing ‘the imagination of many on the left’ it led to incoherent explanations of Thatcherism and its causes. And because its use was overextended into different fields and levels of social, political and ideological analysis it created generalization.[ix]

While the use of authoritarian populism in political analysis has been limited, it has offered the discipline of psychology a means to expand into new fields of inquiry. Milton Rokeach extended the work to a psychological understanding of open versus closed mindedness.[x] Bob Alytemeyer simplified Adorno’s f-scale in response to the criticisms and created a new Right Wing Authoritarian scale[xi]. And in the 1990s a psephological scale was introduced to measure libertarian and authoritarian values.[xii] With the rise of Ukip and the outcome of the EU referendum, this individualistic psychological approach became widely used to predict voting behavior.

Researchers using this approach may seek to avoid accusations of bias by claiming the mantle of science, but the methodological flaws of the original study remain in all its subsequent versions. Constructing binary personality types using cognitive psychology leads to a reductive and limited view of human subjectivity. Using this method to explain complex sociological processes results in a mechanistic and crude – often polarising – understanding of social relationships and political identification. Connecting the realm of cognition with that of ideology in this manner is like mixing oil and water. They touch, but each does not alter the structure of the other.

The use of the concept of authoritarian populism reduces Leave voters to an undifferentiated group of undesirables or inadequates. Their vote is presented as a product of their dysfunctional psychological reaction to social change. Each negative adjective attached to them has its corollary in a positive one for Remain voters: authoritarian vs liberal, closed vs open, uneducated vs educated. Nowhere in these studies are they credited with one single positive factor or political virtue.

The negative framing of Leave voters exaggerates the difference between Leave and Remain voters in the country. It also reproduces the long-standing class condescension of the liberal intelligentsia. Claiming it to be science doesn’t alter the fact. Focusing on Leave voters has allowed the liberal intelligentsia to avoid addressing the ways in which its own interests, its increasing global mobility, support for high levels of immigration, and tendency to self-exemption from the ties of nation and place, have contributed to the growth of populism, and the vote to leave the EU.

In an afterword the Cambridge researchers rightly call on the need to build bridges between communities by further understanding the psychological processes behind social attitudes. But academic and political analysts might begin by turning the spotlight on their own methodologies and cultural presumptions.

Jonathan Rutherford is Emeritus Professor of Cultural Studies, Middlesex University. He is a writer, political adviser, and co-founder of Blue Labour.

Jonathan Rutherford is Emeritus Professor of Cultural Studies, Middlesex University. He is a writer, political adviser, and co-founder of Blue Labour.