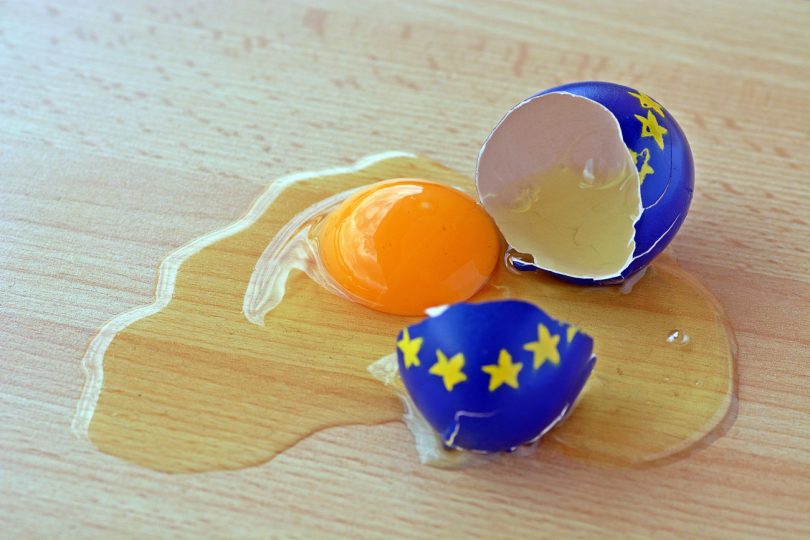 Professor Richard Tuck rehearses the long history of British governments using the EU to constrain the policy choices of their domestic rivals. Given this history, it is not surprising that British politics is now in crisis, since the original temptation which was put in front of post-war politicians – that they could lock in their own policies for their country in near perpetuity – is still there. The best prospect the Left has of preventing the Right ‘locking in’ a neo-liberal economy for years to come is actually the hardest Brexit that can be contrived.

There is a general sense that the negotiations between Britain and the EU are a shambles, and that British politics in general is broken.  This is clearly true in some ways, but we should not misunderstand what is happening, and fail to see that in part it is the welcome reawakening of long-dead political struggles.  We tend to think that a single entity called “Britain” entered another entity called “Europe”, and that what has mattered since is simply the relationship between these two entities.  But, in reality, the EU and its predecessors – the Common Market and the EEC – were always used for internal British purposes, as a way of securing a semi-permanent victory for one side against its opponents.  This process began right at the beginning: the Labour Party consistently opposed the various schemes for European unity in the 1950s, for reasons which Nye Bevan put very clearly in 1957:

‘in the absence of a wider sovereignty, all the conception of a common market does is to elevate the market place to the status now enjoyed by the various European parliaments. Is it the disenfranchisement of the people and the enfranchisement of market forces? Are we now expected to go back almost a century, reject Socialism, and clasp free trade to our bosom as though it were the one solution of our social evils? … The conception of the Common Market… is the result of a political malaise following upon the failure of Socialists to use the sovereign power of their parliaments to plan their economic life… It is an escapist conception in which the play of the market forces will take the place of political responsibility…’

Conservatives, on the whole, expressed enthusiasm for the Common Market for precisely the same reasons. They understood that its general character would make a return to full-blooded Attlee-style socialism almost impossible.  It is no accident that Margaret Thatcher both voted for the European Communities Act and was an enthusiastic advocate of the Common Market’s evolution into the Single Market we have today, with its extensive restrictions on state aid and its enforcement of a high degree of competition in European markets, including the labour market.

From the beginning they also welcomed the free movement of labour. The position paper presented to Macmillan’s cabinet in July 1960, which formed the basis of all the later negotiations with the EEC, recognised that it would be the ultimate consequence of joining, but said – interestingly – that, “the movement of labour works both ways, and might conceivably be of advantage to us as a method of dealing with unemployment” – not a sentiment we can imagine a Labour government ever expressing!

In contrast, what the Conservatives who engineered Britain’s membership of the EEC were not so keen on was the protectionist tariff regime.  The same position paper went so far as to state about temperate foodstuffs that:

‘It seems out of the question that we could accept the common tariff or the other protective devices… for these products… because of the impact on the Commonwealth, the damage to our trading relations with third countries – in the case of the United States a breakdown of the Trade Agreement – and the consequences for food prices here.’

The UK had had a trade agreement with the US since 1938, but it was terminated in 1962 on the grounds that it was largely redundant given GATT. But the timing of its termination is suggestive, given that it was in the middle of the first negotiations to join the EEC. In 1960, the Cabinet had not supposed that the agreement was redundant, even though a couple of months earlier the EEC had lowered its common external tariff to fit in with GATT.

Both political parties in Britain had traditionally had an ambiguous relationship with protectionism, with Baldwin’s government in the depression-hit 1930s introducing a range of restrictions on free trade at the same time that many members of the Labour Party opposed them.  By the 1950s, free trade was once more the ideal on both sides of the political spectrum, but it is fair to say that on the whole in the post-war period Labour’s instincts were more protectionist than the Conservatives’. This was something which became very clear with the so-called Alternative Economic Strategy of the 1970s and 1980s, which attracted a great deal of support from within the party, and which the present party leader, Jeremy Corbyn, still seems to espouse in large part. Labour’s hostility to the Common Market was rarely based on a commitment to general free trade; instead, for some people (such as Richard Crossman), their vision for Britain was that it should be what he proudly described as “a socialist offshore island”, while for others (notably Hugh Gaitskell in his famous speech to the party conference in 1962) it was as a continued part of a Commonwealth trading area with some degree of common external tariff.

We should not, incidentally, underestimate the importance of the Commonwealth to Labour thinking, or treat it as the imperial anachronism it may have been for the Conservatives. Denis Healey in his pamphlet against the Coal and Steel Community in 1950 proclaimed that, “by transforming four hundred millions of Britain’s Asian subjects into friends and equal partners, the Labour Government has built a bridge between East and West, between the white and coloured peoples”, and this sense of the Commonwealth as an alternative to the wholly white European schemes for unity was widely felt on the Left in the 1950s and 1960s. But the critical point is that, whatever the actual area that had protective tariffs against the rest of the world (whether Britain by itself or the Commonwealth), on the whole members of the Labour Party felt comfortable with the principle of protectionism.

Once Britain entered the EEC, each party had something it wanted.  For the Conservatives it offered a means of entrenching a market economy, while for the Labour Party it offered an alternative to a world of unrestrained global free trade.  But the benefit to the Conservatives was incomparably greater, since for them accepting the level of protectionism which the EEC provided was a small price to pay compared with the epochal advantage of – in effect – constitutionalising a market-based economy and society.  A few gestures to workers’ rights by the EEC in the 1980s won over some more Labour members, but compared (for example) to the steady encroachment on the real power of trades unions across the Continent under the aegis of the ECJ, these gestures were pretty hollow.  But now, as the prospect of Brexit looms, British politics has reverted to the contestation which has been frozen for forty years.

For many Conservative opponents of the EU, the great prize within reach is that which they always wanted: entrenchment of a market at the domestic level, and full freedom internationally to participate in a global market.  For these people, entrenchment of the market could be achieved through something like the Chequers proposals, but it could also be achieved through continued membership of the EEA, since the EEA is in effect a subsidiary of the EU’s single market but is outside the Customs Union.

It is no accident that Conservative MEP Daniel Hannan has for a long time advocated the EEA route, and the prospect may be gathering momentum in right-wing circles.  Labour’s instinct, on the other hand, is to stay in “a” customs union with the EU – not necessarily because the leaders of the party actually want this in its own right (since some of them are clearly genuine Brexiteers), but because if some kind of compromise has to be engineered they are not as unhappy with a customs union as they would be with continued membership of the Single Market.

Given this history, it is not surprising that British politics now appears to be in a condition of crisis, since the original temptation which was put in front of post-war politicians – that they could lock in their own policies for their country in near perpetuity – is still there, even if full membership of the EU is no longer (we presume) available to them.  They are playing for high stakes, and we should not expect them to do so in an atmosphere of calm.

Labour’s position in this struggle, however, is not quite the same as the Conservatives’, since for many Remainers in the Labour Party (I think) the EU is not intrinsically desirable.  What they want is to stop the Conservatives using a post-EU settlement to achieve the domestic goals the Conservatives always wanted. This is why, despite the manifest evidence to the contrary, so many people on the Left cling to the idea that outside the EU workers’ rights in Britain would be undermined.  What they have instinctively spotted is that some versions of a Britain outside the EU might indeed lock in a Thatcherite economy, though what they fail to see is that a Britain inside the EU would fare little better.

But if this is right, the best prospect the Left has of defeating this possibility is the hardest Brexit that can be contrived.  A customs union nowadays will not remain as merely an old-fashioned common external tariff system; it will increasingly be configured through the judgements of the ECJ (which will have to be involved in some fashion) into a system with considerable domestic reach, which will inevitably be of a neo-liberal character, given the fundamentally market-based structures of the EU.

The only thing which will allow the Left to roll back the last forty years of market entrenchment is opening up a space in which democratic politics can determine the shape of the British economy, and British society in general, as it did from the coming of universal suffrage until 1 January 1973.  If at some point the electorate votes for Conservative policies, so be it; the policies can at least be reversed through the simple means of a general election, rather than through what we are finding to be the agonising process of breaking away from a supranational entity.

These are big issues, of an extremely far-reaching kind, and one would not expect a democratic society to be in anything other than turmoil about them.  The key thing is for us all to recognise this, and not lose our nerve: the turmoil itself does not matter – and is indeed the outward sign of a healthy politics, just as the dramatic moments recently in the House of Commons are the outward sign of its waking to its old role after its forty-year sleep.  What would matter would be a desire to suppress the turmoil by forcing us back into the structures of the EU, whether actually under that name or not.  If the politics of the last couple of generations is broken, so much the better, and we must live with that fact until democracy has properly re-established itself.