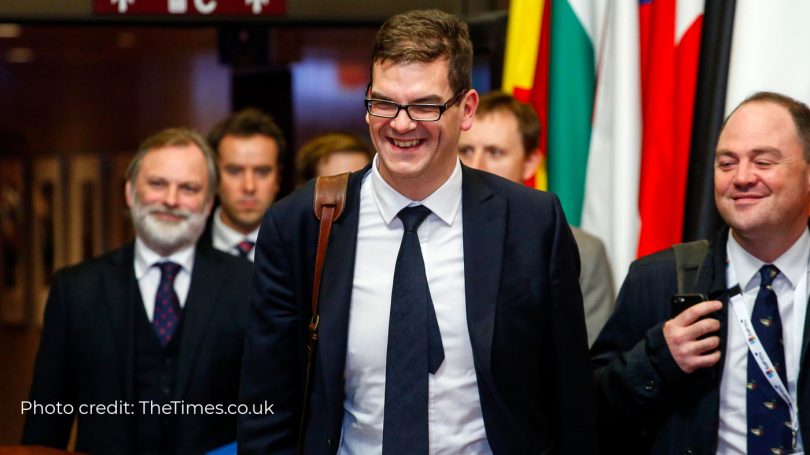 A BfB contributor comments on a Times profile of Oliver Robbins, which remarkably celebrates his ability to have EU texts accepted in Whitehall and Westminster as a fait accompli.

The Times (13 October 2018, page 13) published an article praising the talents of Mr Oliver Robbins.  He is someone whose “charm” and “brilliance” is lauded by European diplomats.  It is said that:

Mr Robbins has come to be seen within the EU as the only person capable of navigating No. 10 and Europe towards a mutually acceptable compromise.

The article curiously fails to highlight a single issue on which Mr Robbins has obtained a compromise from the EU.

It is difficult to see by what criteria Mr Robbins’s efforts are hailed as brilliant.  The French diplomats of the ancien régime, for example, were renowned for their excellence.  This was measured in being able to achieve peace settlements far better than their military position justified.  The War of Spanish succession was far worse militarily for France than would be assumed from the Treaty of Utrecht.

Obvious diplomatic failures in the Brexit negotiations are easier to find than any successes.  Not least in the December “sufficient progress” agreement, which the UK government did not seem to realise meant to the EU that the UK had guaranteed either to abandon Northern Ireland or pretty much to abandon Brexit.  British diplomacy had earlier failed to spot how the Irish Border issue was coming to the surface.  This is perhaps understandable: the Guardian in February 2017 had entirely missed the importance of the Irish border to the EU27, noting it only as an issue for the Irish government, who would be “doing everything in its power to also ensure there is no reintroduction of a hard border with Northern Ireland”.[1]  Brilliant diplomacy might have spotted early that it was becoming the EU’s overriding concern, and might have realized that the issue could undo Brexit.

More broadly, it is not possible to imagine a “transition” deal worse than the one achieved by British diplomacy.  Even Nick Clegg described the deal as “humiliating” and quoted a French source close to Macron that “No self-respecting French politician would put their country in that situation.”[2]

The Times profile on Oliver Robbins gives what may be an important insight:

By the end of last summer, Mr Robbins was firmly in control of the British negotiating team and had started to perfect his technique, which was to allow the EU to take the initiative.

By allowing Brussels negotiators to come forward with what they wanted, in the absence of coherent government policy, Mr Robbins helped to shape the outlines of draft texts while being able to present them as a fait accompli from the EU back in London.

There is some sense in getting a negotiating opponent to move first, but usually so as to know their top line, or maybe make them feel obliged to come up with something more reasonable than their top line.  It is difficult to detect how Mr Robbins could have “shaped” in Britain’s interest either the draft text that preceded the “sufficient progress” declaration in December 2017, or the transition demands, or the EU’s draft on the backstop.  It is difficult to know how these final texts could have been worse for the United Kingdom.

In contrast to the French diplomats of the ancien régime, Mr Robbins’s accomplishment appears to be the ability to present the top line demands of the EU as a fait accompli.  The result of his efforts is to get British politicians to accept what no self-respecting French politician would abide. He has unfailingly to date found a way of bringing back to the EU the signature of the British Government.

It is no wonder that he receives the highest praise from EU diplomats.

Of course, it helps that many in the government, Parliament and the civil service believe that the EU is in a position to dictate terms.  If the aim of the exercise has merely been to make the negotiations look less like those of Versailles in 1919 – where the Germans only attended to sign the Treaty that was “dictated” to them – then doubtless Mr Robbins and his team have done well.

As is implicit in Nick Clegg’s comments about how the French would have viewed the EU’s transition demands if made against them, a continual question for EU diplomats must have been whether they were pushing things so far that no self-respecting country could agree.  The Times suggests – seemingly not sarcastically — that the EU have realized which diplomatic mastermind could ensure their success and are appropriately appreciative.

[2] https://www.thetimes.co.uk/article/nick-clegg-interview-the-brexit-transition-period-is-an-undignified-act-of-humiliation-hc9m9c6jv.  Obviously, Nick Clegg waited until after the transition was agreed to say such things, and at no point ever suggested standing up to the EU’s demands.