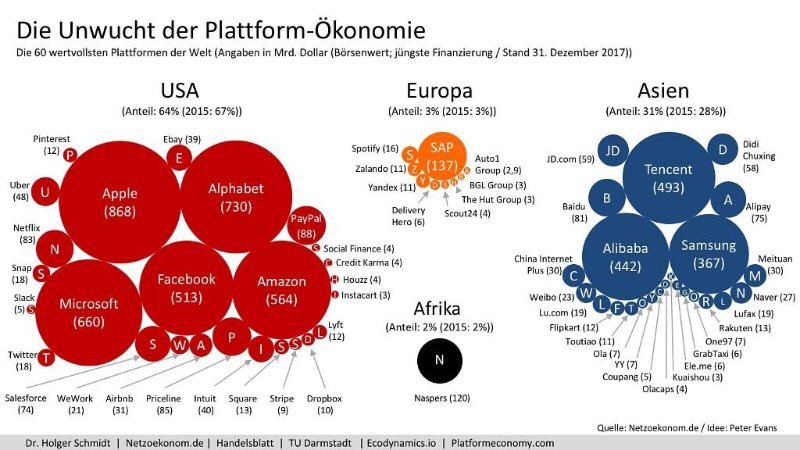 A former major company CEO argues that the EU’s current status as a minnow in the Global Technology World should cause concern for its future growth prospects.

Looking to the future of the EU’s economic growth prospects without Britain, more attention should be paid to the remarkable fact that EU technology companies account for just some 5% of the World Technology Index (IShares Global Tech ETF). Whilst the EU share of World GDP1 has declined significantly since 1980 from some 30% to sub 20% ex UK, it is still the second largest economic entity in the World, albeit a supranational one.

This makes it even more extraordinary that the EU economic block is such a minor player in World Technology, the principle driver of growth in the world’s largest economies.

One hardly has to emphasise the importance of the entrepreneurial and innovative brilliance of the creators of Amazon, Apple, Facebook, Google, Intel and many others who have driven much of the growth of the US economy in the last decade to the extent now where they account for some 26% of the total market capitalisation of the S & P 500.

Now, the names of Alibaba, Baidu and Ten Cent are fulfilling a similar role at an earlier stage in the economic cycle for China, not to mention the other South East Asian giants, such as Samsung and Taiwan Semiconductor (TSMC). The whole 27 countries of the EU, ex UK, have not produced or created a single significant rival to these companies.

Perhaps, the EU’s obsession with standardisation and harmonisation leads to the stifling of innovation and healthy competition.

Nor are the seeds of the future looking particularly healthy. The fact that Cambridge University has won 50% more Nobel prizes than the whole French nation (98v65) has some serious implications, not just economic but also educational in the ability of their systems to generate innovative and entrepreneurial skills for the future. Nor is a background of some 19% Euro area youth unemployment2 (as high as 30% in the 15 – 24 age group if under-employed part-time workers are included) exactly fertile ground for dramatically reducing this technology industry deficit. Remember these quite disgraceful youth unemployment figures over the last decade are now becoming structural (Italy and Spain still have 35% + youth unemployment) in spite of the extraordinary economic stimulus measures of the ECB from which they still have to exit successfully.

What of the UK? The current situation remains encouraging. According to the EY European Investment Report3, the UK remains, by some margin the largest recipient of tech FDI investment in Europe (from both EU and non-EU sources), some 27% of all projects. The predominance of London in particular stands out. The capital attracted 17% of all tech FDI investment in Europe with 168 investments, three times the equivalent in Paris and four times that of Berlin. Encouragingly also is the fact that the UK already has 13 Tech Unicorns (defined as tech companies with a market capitalisation of $1 billion +).

However, to maintain the UK Tech pre-eminence in the European economic zone, post Brexit, it is essential to ensure a competitive tax environment, a light regulatory touch , seed and venture capital support and the fostering of both homegrown and worldwide talent.

These are conditions that apply even more to the EU if it’s Technology deficit is to be addressed. The challenges of Artificial Intelligence and Robotics are already looming. The seemingly relentless growth of the Acquis Communautaire leads inevitably to the dead hand of over regulation and obstacles to healthy competition.

Europe of course does have technology successes, in particular SAP in Germany (IPO 1988) and ASML in the Netherlands (IPO 1995). Nokia in Finland and Ericsson in Sweden are other examples, but these were built up before Finland and Sweden joined the EU in 1995.

Unless their current culture is reversed, the EU is likely to be a laggard in the AI revolution and fall further down the international economic order. The UK will also need to build on its existing strengths and develop robustly into the new areas, in particular robotics, AI and gene therapy. UK strengths in finance, pharmaceuticals and aerospace need to be maintained, but much is needed elsewhere in the economy. UK expenditure on private sector R&D is not in the top rank and needs to be increased if the UK is to make the most of Brexit. The new world beyond the EU, some 80% of World GDP, gives the UK an opportunity, and certainly an incentive, to break into new areas of technology. Nothing will be automatic. Everything will depend on entrepreneurial and innovative spirit. As evidenced by radar, the jet engine and nuclear fission during World War II, Britain tends to be at its best when the going gets tough.