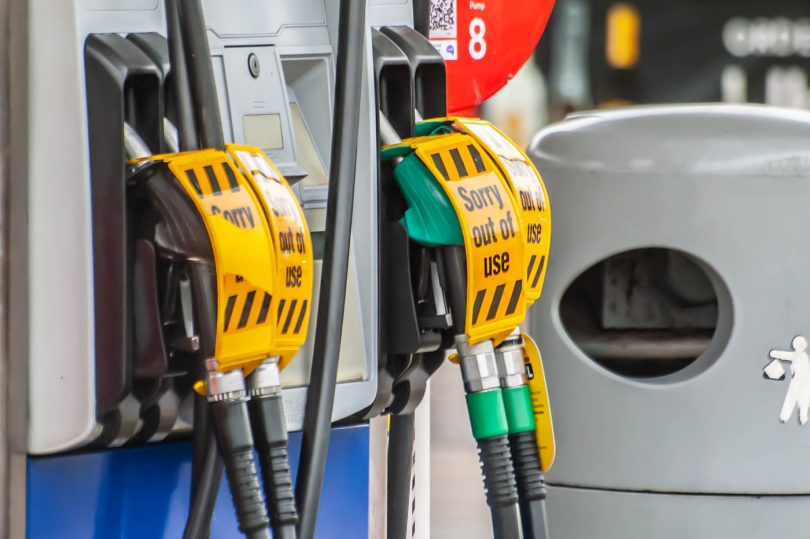 Gwythian Prins updates his earlier article on fuel shortages and uses the context of Ashby’s Law to demonstrate how Remainers were able to use minor shortages of fuel to create a national panic. Professor Prins sees this as part of a wider Remainer strategy which includes calls for the UK to rejoin the EU’s Galileo satellite project.

In my previous article on the ‘fuel shortage’ panic which swept the UK in late September 2021, I identified several of the salient data which help to explain both why and how it probably happened, and I explained how Ashby’s Law of Requisite Variety provides the correct theoretical tool to hypothesise linkages between seemingly very varied but simultaneously occurring events.

It should be no surprise that Dr W. Ross Ashby, a primary founder of the science of cybernetics, was by profession both a clinical and a research psychiatrist. Upon return from active service in the Royal Army Medical Corps in India, where he saw his share of mental breakdown, he wrote his seminal 1957 book An Introduction to Cybernetics while serving as Research Director at a private mental hospital converted from a Victorian lunatic asylum. His work on cybernetics developed as part of his quest to restore balance to the troubled mind.

I freely admit that Ashby’s Law is not easy to grasp at first. So it may be helpful to provide readers with its operation in diagrammatic form. 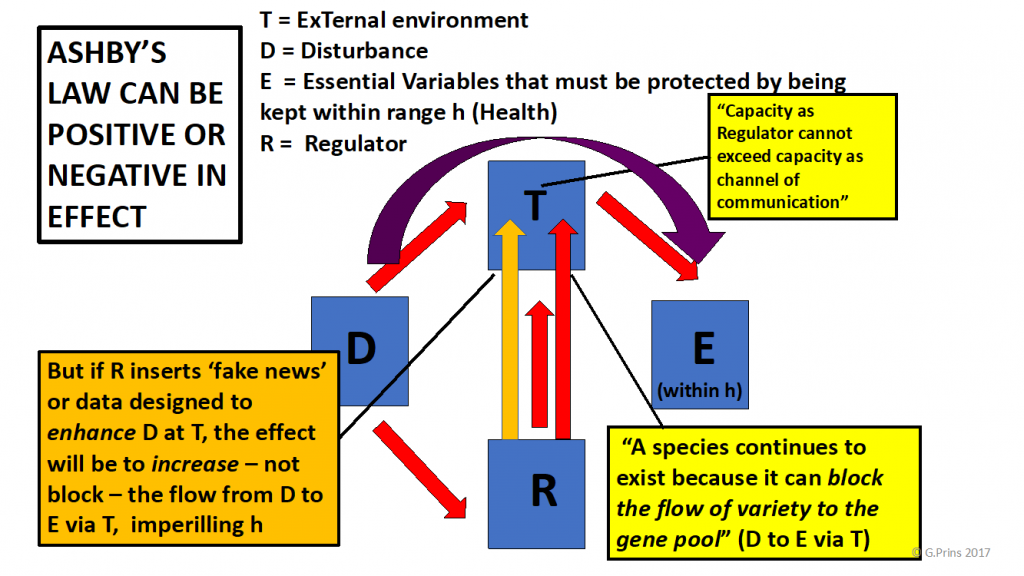 Ashby’s quotations show that his thinking had gone beyond the formation of psychiatric treatments   to a significant contribution in evolutionary theory. Our purposes are more humdrum, but nonetheless powerful.

A hypothesis for Rejoiner Central

I have added the orange box and arrow to help form a robust hypothesis of what “Rejoiner Central” may be up to now, as it single-mindedly drives on with its intention to reverse Brexit.

My hypothesis is that Rejoiner Central may have just tripped over a new method which gives it fresh hope of achieving its goal, given that the “Millerette routine” – pranced exquisitely before the courts by QCs such as fox-basher Jolyon Maugham – ran out of parliamentary indulgence with Boris Johnson’s thumping majority and is now frozen out, as the Prime Minister said in Manchester, by the greatest Frost since the Great Frost of 1709.

The new Rejoiner strategy may be cynical beyond the normal expectations of normal people; as such it is a sign of the fanatical rage that drives Rejoiners ever onwards, heedless of every and any democratic constraint – for it is to exploit actively the fragility in public mood which makes stochastic catastrophic collapses in trust both easy to exploit and to engineer.

The framing concept is Catastrophe Cusp theory (first popularised in psychological research by Fazey and Hardy in 1988); and, in mathematical terms, it exploits Lanchester’s Square Law. Lanchester’s law derives from a pair of differential equations defined during the First World War which helped to predict – from the relationships between the size, firepower and effective rate of fire of two opposing forces – which was likely to win in attritional combat. The Law states that the power of a force of individual shooters is proportional not to the number of shooters, but to the square of the number of shooters. Therefore, even a marginal advantage in fighting power between two forces of equal size will lead to a catastrophic collapse of the loser.

For our hypothesis, it means that an apparent equilibrium can be suddenly disrupted by factors which stoke public paranoia and which panic government, so the situation slides to the dangerous – lower – control surface of the approach to a catastrophe cusp.

A topographic diagram may help to make that clear: 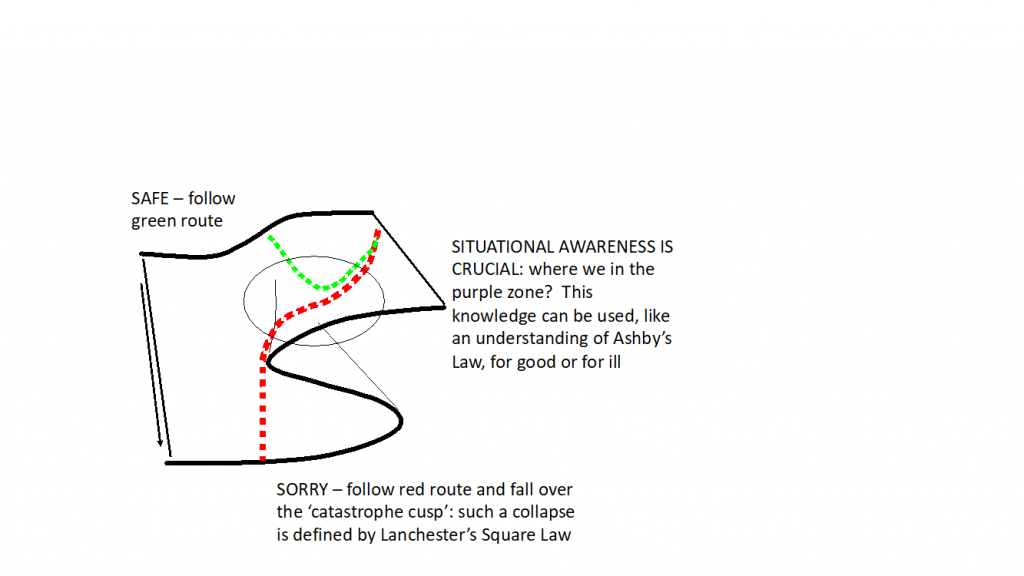 The Rejoiner objective is to argue, like Gina Miller, that Brexit is the cause of all current miseries (the pandemic having lost its usefulness as an argument to delay Brexit), and to normalise that view so that it becomes fact rather than theory.

In my first essay I explained why the evidence suggested that the truth was more likely to be exactly the inverse to the Miller view.

Since then, more information has been appearing. First, the Petrol Retailers’ Association has now published evidence which confirms just how small a drop in fuel deliveries to petrol stations in the South East actually occurred in late September. Small, but enough to trigger stochastic collapse over the catastrophe cusp into panic propelled by negative Ashby’s Law forces. Second, evidence is also emerging of the operation of another old friend: the Law of Unexpected Consequences.

For environmentally invalid and economically damaging reasons that I explain in The Worm in the Rose, a comprehensive analysis of ‘green growth’ and ‘net zero’, to be published next week, the decision was taken to increase the ethanol content in motor spirit from 5% to 10% (E-5 to E-10). E-10 is in every way an inferior fuel. The policy is a classic example of lazy green virtue-signalling. One of its harms is the corrosive damage which it can produce in tanks, pipes and seals. It also has a much shorter storage life. Some petrol retailers, under compulsion to degrade their product, seem to have been sensibly running down their E-5 stocks and, it is reported, renewing seals etc. – meaning that some fuel stations may have been below usual stock level and therefore prone to running dry more quickly than usual.

We may therefore enrich our earlier assessment as follows:  all fit into a perverse application of Ashby’s Law. Input variables are now seen to be six:

(a) slight drop in deliveries caused by deranged eco-loons and Police lassitude, as my fluid mechanics piece explained;

(b) low tanks at filling stations because of the switch from less to more ethanol (E5 to E10) caused by self-harming ‘green’ policies;

(f) Ministers like Mr Shapps being not up to speed and failing to combat the “Millerette” narrative.

From Rejoiner Central’s point of view, it has all worked rather well. EU media, including official EU media, have been assiduous in blaming Brexit for shortages. There has been some relaxation of visa rules for EU HGV drivers, even though the driver shortage is Europe-wide and  there was no shortage of fuel at petrol stations the week before the panic with the same number of available drivers. Five thousand extra visas are not going to bring back free movement and endless cheap labour for Rejoiners to exploit, but they might have it as a marker for the Immigration Bill as it goes through the Rejoiner Lords.

Adding fuel to the fire

But timing is key and the panic begins to subside. Other stories grab the front pages. And so it must be rekindled. Hence we see, once again, supposed eco-activists (whose prominence  at this particular juncture is nothing short of miraculous) sitting down in the middle of a major traffic artery under the complaisant eyes of the police. The Home Secretary needs to get her new punitive legislation into place as swiftly as possible so that the protestors may, in the PM’s lapidary Conference speech phrase, be “well insulated in prison.” Meanwhile, what is the legal objection to motorists removing obstacles which impede the lawful conduct of their business if the police refuse their duty?

But for me the tell-tale fingerprints of something organised and nasty in the wood-shed are to be seen with the sudden reappearance of a concerted effort to pressurise the government back into the EU’s faltering GALILEO satellite programme. Hello? Why now?  Especially since it has been reported that the EU is considering buying into Britain’s OneWeb.

Since 2018 Sir Richard Dearlove and I have published a cumulative sequence of four articles on Briefings for Britain which, before the event, made the case for the UK bailing out of GALILEO and buying into Low Earth Orbit (LEO) ‘swarm’ satellite platforms via OneWeb; and then, after the event, defended the correctness of that decision against continuing sniping from both industry and civil service sources who still sought to get back into GALILEO.

As with another live line of pressure seeking to persuade the government to agree to participate in the EU “Defence Union” via PESCO operations (on which see many articles that I have written on this website), the risk to the UK is the same. All EU initiatives are like spiders’ webs: everything is linked to everything else. Therefore, it was a flat out untruth when a House of Commons Library researcher wrote recently as follows: 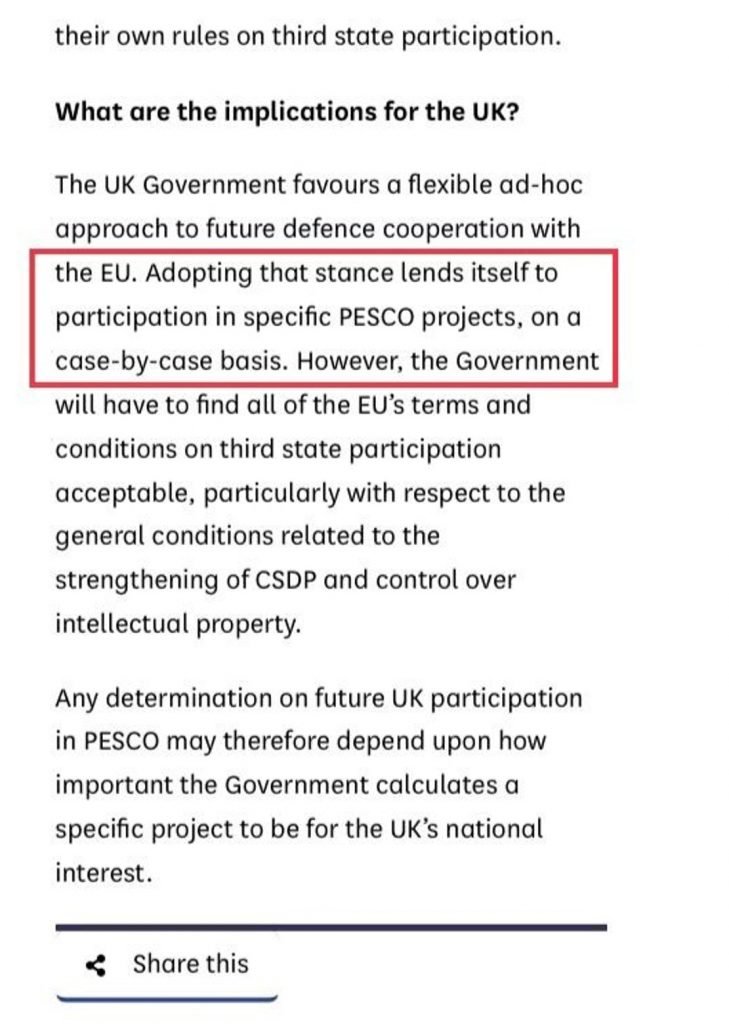 Pick and choose is expressly not possible; and I find it very disturbing that a source which most MPs tend to treat as gospel is publishing what is, in effect, pro-EU and Rejoiner narrative. I shall return to this topic in another essay soon.

Nothing has changed in any of these areas, except that Communist Chinese hostility is even more overt. But, as ever in political culture wars as deep and bitter as is the Rejoiner attempt to subvert Brexit, one asks Metternich’s question upon being told of the death of Talleyrand: “I wonder what he meant by doing that?”

In this case, I think a reasonable hypothesis is clear and is well supported in terms of the three governing theories of psycho-political dynamics – Ashby, Catastrophe Cusp and Lanchester: broaden the bandwidth of the attack to multiply the disruptive variables and to maximise stochastic chaos. To do this is to help normalise the empirically ill-founded assumptions in the Rejoiner narrative.

The moral of this update? Keep your eyes and ears open for the next front to open and be prepared to shut it down promptly with rapid rebuttal: that is how Ashby’s Law works to protect health and balance. Proper horizon scanning and pre-emptive action should be undertaken, since attack is often the best defence. Above all, do not underestimate the lengths to which, in their grief and rage, the Rejoiners and their supporters overseas will be prepared to go.