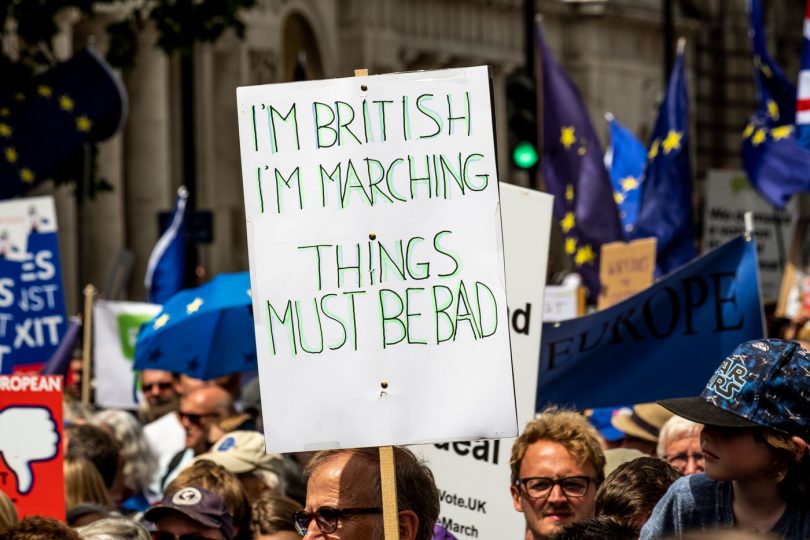 A group of former British diplomats have urged the Prime Minister to give up Brexit. The weakness of their arguments, and the lack of judgment displayed, are sadly typical of the official attitudes that have caused us such trouble since 2016.

On February 14 – St Valentine’s Day – The Guardian reported that “more than 40 British ambassadors and high commissioners have written to the Prime Minister warning her that Brexit has turned into a ‘national crisis’ … The letter underlines concerns that British influence in the world will wane if the country leaves Europe’s trading and foreign policy bloc”.

Subsequently it transpired that it wasn’t a letter to Mrs May – pace St Valentine’s Day – but a statement by them.  No definitive text seems to be available, but we can be confident of the trustworthiness of the coverage of the event given to it by The Guardian.  On this basis, it would seem appropriate to concentrate on five passages, as representing the message of the “more than 40” as a whole:

(1)  There is no possible deal that will be a sensible alternative to the privileged one we have today as members of the EU.

(2)  If the Prime Minister’s deal is passed in Parliament, it will not be the end of Brexit but will in fact mark the start of year upon year of negotiation and negotiation – truly a ‘Brexeternity’ of endless uncertainty for both citizens and businesses alike.

(3)  Our advice to Theresa May today is clear: we should not leave the EU when we have no clarity about our final destination.  Instead we most use the mechanisms at our disposal; above all we must seek to extend the Article 50 negotiating period.

(4)  The Brexit fiasco has already weakened the UK’ s standing in the world. We strongly advocate a change of direction before it is too late.

(5)  There is now, in addition to extending Article 50, a powerful argument to go back to the people and ask them whether they want the negotiated deal or would prefer to stay in the EU.

The validity, or even the relevance, of each of these propositions individually is questionable.  Taken together, one is obliged to conclude, with the highest respect to all those concerned, that the text must rank among the more egregious documents in British diplomatic annals.

Let us look at each of these five pearls of wisdom in turn.

First, the question was/is not whether we are looking for more favourable deal with our partners, but whether we want to stay in the EU or not.  We decided in the Referendum that we did not.  The decision was confirmed overwhelmingly in the General Election of 2017.

Secondly, the word “privileged” is misleading.  Any opt-outs we or others may have are not “privileges”: they are rights, in the face of undemocratic pressure from the centre to go faster than popular opinion would accept.  We have paid through the nose for our membership.  We got no credit from our partners when we voluntarily waived part of our rebate at the turn of the century. Now more than ever, the EU needs our lovely money.

This begins oddly:  “if the deal is passed in Parliament“.  Where else could it be passed?  If it is to be succeeded by a “Brexiternity” the responsibility for that misfortune will be wholly that of our EU partners, who insisted on taking the withdrawal arrangements and the future relationship in sequence,  rather than in tandem, as envisaged in paragraph 2 of Article 50, and as endorsed in Mrs May’s “trigger” letter of March 29,  2017.  Allegations of ‘Brexiternity’ in fact constitute an expression of no confidence in the EU.  In effect, the ‘more than forty’ are saying: “as we don’t trust the EU to keep their side of the withdrawal bargain, we should remain their near-captives for ever and anon.

It is not the case that the UK does not see the post-Brexit way ahead.  Mrs May’s trigger letter deserves full marks: it is comprehensive, clear, co-operative, forward- and outward-looking.  But when have we ever had complete clarity? When can we ever expect to have it, except in the Keynesian sense that in the long run we are all dead?

Or is the suggestion that we have clarity about our final destination now, by virtue of membership of the EU?  In that case, what is it?  What will the EU be in a decade or two?  And, as a matter of some democratic interest, how does one reconcile fixity of “final destination” with the notion that “a democracy has the right to change its mind”?

We are told that the Brexit “fiasco” has weakened our standing abroad.  The signatories do not understate their qualifications for expressing an opinion on the question: “as former diplomats who have served around the world, we have a clear understanding of what contributes to Britain’s influence in the world”.

On the basis of their assessment, the authors “strongly advocate a change of direction before it is too late”.  In the light the rest of the message, what can that mean other than that Mrs May should go immediately into reverse, whatever the political damage?  What would such weak and self-contradictory action do to our “influence in the world”?

Even a cursory reading of the five passages establishes beyond doubt that the prime purpose of extending Article 50 is to “go back to the people”, induce them to change their mind, and opt to remain.

The impression is created that this will be a costless and painless process.  Much is made of the ruling of the European Court of Justice that we have the right to revoke our notice of withdrawal.  Does anyone seriously imagine that our partners would stand idly by after all that has happened?  That they would be glad if we stayed is not open to doubt: “our hearts are open, our doors are open”, they tell us.  They do not, however, tell us that their minds or their wallets are similarly prepared.

Five absences from the letter-statement readily invite our attention:

(i)  the absence of any hint or suggestion that present problems might be attributable in any way to the EU.  The fault is laid solely at the door of the UK

(ii)  an absence of any recognition of the difficulties which the Prime Minister faces in trying to deliver the verdict of the Referendum, overwhelmingly endorsed by Parliament

(iii)  an absence of any suggestion that there is more than one side to this or that contentious issue.  Diplomats are traditionally thought to be unable to avoid saying “on the one hand” and “on the other hand”.  But this document reminds me of a line from Terence Rattigan: “my father always sees both sides of the question: his side which is right, and the other side which is wrong”

(iv)  an absence of political judgment, implicit in the notion of “going back to the people” and inviting them to accept that they got it wrong.  Seventeen million members of one of the most sophisticated and level-headed electorates in the world voted to leave.  They would quickly send packing any biassed exhortation to change their minds.

(v)  an absence of historical perspective.  Le vieux continent has enjoyed over the centuries many a political configuration.  All the more ambitious among them have come to grief in one way or another.  Has it never occurred to any member of a group as talented and experienced as these former diplomats that it could conceivably be better for the UK to be a warm supporter on the outside, rather than leading the Awkward Squad on the inside?

Goethe said that we had the courage to be what Nature made us: that does not mean perpetual subservience to a moribund Anglo-Brussels orthodoxy