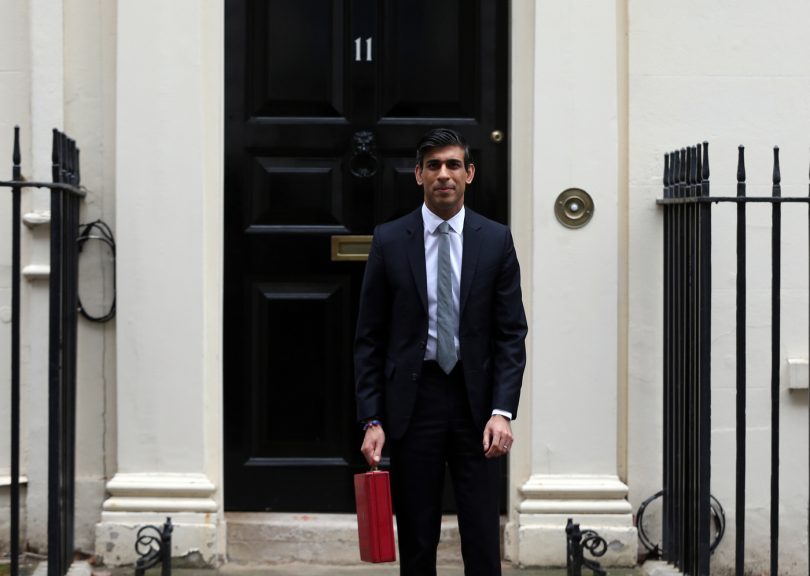 The OBR has again claimed that Brexit will have a big long-term negative impact on GDP. These claims are based on a misleading interpretation of recent trade figures and on a supposed link between trade intensity and productivity which is not supported by the evidence. It is quite inappropriate for a supposedly independent body to produce such unbalanced reports.

The Office for Budget Responsibility (OBR) has recently reiterated its claim that Brexit will have a large negative long-term impact on UK GDP. This has led to a barrage of media reports suggesting the government’s ‘own figures’ show Brexit will be very damaging for the economy and the public finances. We have strongly criticised the OBR’s estimates of Brexit impacts in the past. Unfortunately, we need to do so again in this article.

The basis of the OBR’s claim is that trade data in 2021 support the view that the UK’s exit from the EU single market and customs union will result in a sharp drop in trade and ‘economic openness’ and that this in turn will have a big negative effect on productivity – reducing it by around 4% in the long term. Both these claims are dubious.

Looking first at trade, the OBR suggests the emerging evidence points to UK trade volumes being cut by around 15% due to Brexit. A cursory glance at the data seems to provide some support for this view – UK export volumes in August 2021 were indeed about 16% below their January 2020 levels. But a more careful examination of the figures shows a different picture. 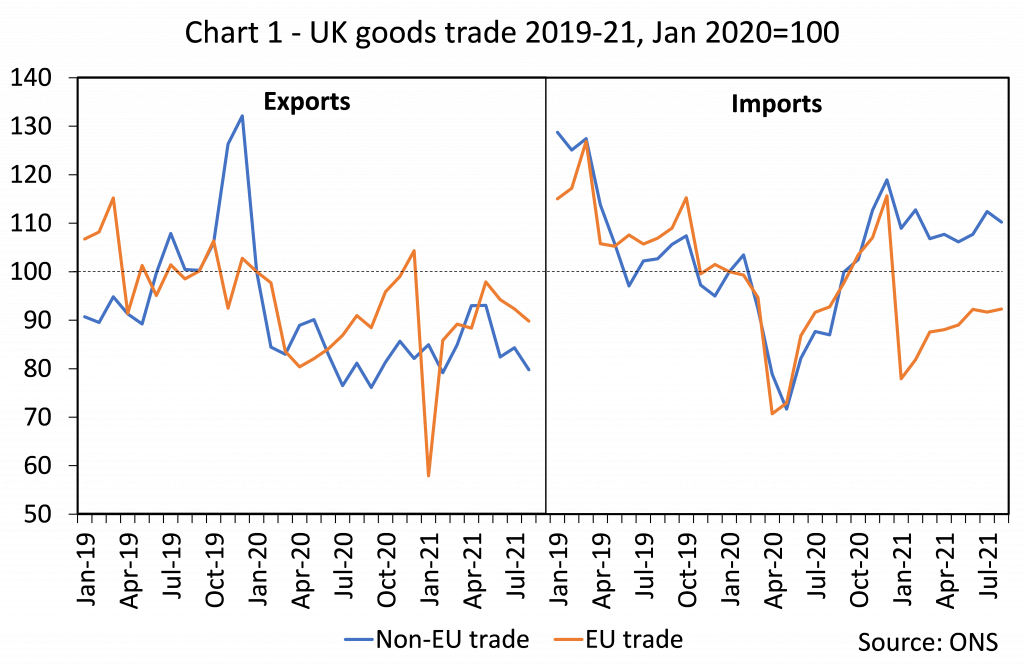 Two important observations immediately jump out. First, while UK exports in August were indeed weaker than their pre-pandemic levels, this was not the case for imports – while imports from the EU were lower, non-EU imports rose offsetting this. So, any trade weakness we can speak of in 2021 is primarily on the export side.

Second, on the export side the greater weakness was not in sales to the EU but in exports to non-EU destinations – UK exports to the EU in August were about 10% below their January 2020 level, with non-EU exports down about 20% (see Chart 1). Given that Brexit has not led to significant changes in the UK’s trade relationships with non-EU countries (with almost all trade deals inherited from the EU rolled over), the main part of the weakness in UK exports seen this year cannot be due to Brexit.

Digging deeper into the data, it becomes increasingly unclear whether much of the apparent weakness in UK exports in 2021 can be attributed to Brexit. For non-EU exports, there has been a clear drop in sales relative to the long-term trend even when oil and erratic items are stripped out. But for EU exports, the levels of recent months excluding oil and erratics are actually very close to the linear trend seen since 2000 (Chart 2). A crucial point to make here is that the trend growth rate of UK goods exports to the EU over the last two decades is very slow – only around 0.6% per year versus over 3% per year for non-EU exports. 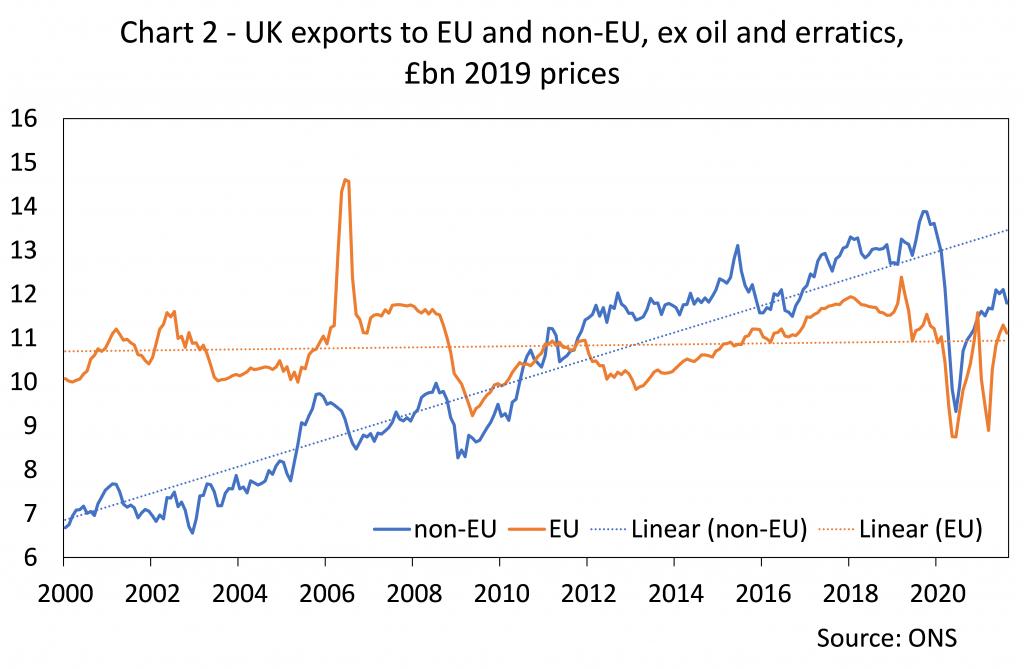 Indeed, weakness in EU demand looks like a key factor explaining the recent trajectory of UK exports to the EU. Total eurozone import volumes in July from all sources were around 2.5% below their January 2020 levels, while UK exports to the EU excluding oil and erratics were about 2% below their January 2020 level in August 2021. So, both weakened to a similar extent (Chart 3). 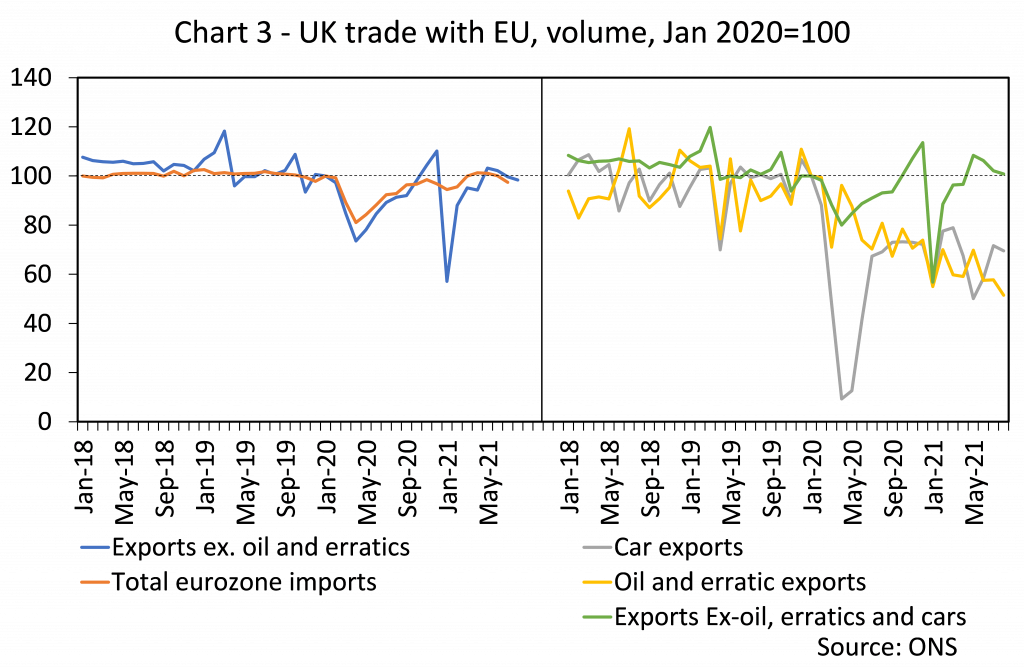 In our view, it is essential to judge any underlying trend in UK exports to the EU using the series that strips out oil and erratic items. Exports of these two items have dropped by around 50% since the start of last year, with declining sales of oil accounting for the majority of this. The drop in oil sales cannot be attributed to Brexit as there have been no significant new trade barriers to oil sales. Rather, this looks like a structural supply side decline.

There is also a case for stripping out car exports which in 2021 have been badly hampered by the global chip shortage. Notably, UK and German global car exports have followed similar negative trajectories in recent months (German exports in August were 25% lower than in the same month in 2019). A series for UK exports to the EU excluding oil, erratics and car sales was actually slightly higher in August 2021 than in January 2020.

Properly interpreted then, the data does not really support the idea that 2021 has seen a big drop in UK trade that can be attributed to Brexit, as the OBR claims. Most of the headline decline in exports relates to weaker sales to non-EU markets while the underlying picture for exports to the EU shows broad stability. On the import side, overall UK imports are little changed since early 2021 – largely as you would expect given UK GDP has not yet fully recovered from the coronavirus recession that began in Q2 of 2021.

The OBR further claims that analysis by the Centre for European Reform (CER) supports their estimate of a 15% drop in UK trade. The CER ‘doppelgänger analysis’ tries to construct a counterfactual path for UK trade based on trade trends in a set of other economies which the CER claim have shown similar patterns of fluctuation to the UK in the past. We are very sceptical of this approach as previously noted. The set of economies CER use includes economies with very different trade patterns and industrial structures to the UK and which over the last two years will have been subject to very different policy regimes. Any resemblance in trade trends in the past could be purely coincidental, and the likelihood that this set of economies would have been a good guide to UK trade trends (in the absence of Brexit) during the coronavirus crisis – with its pattern of unsynchronised lockdowns and varied sectoral shocks – is low. 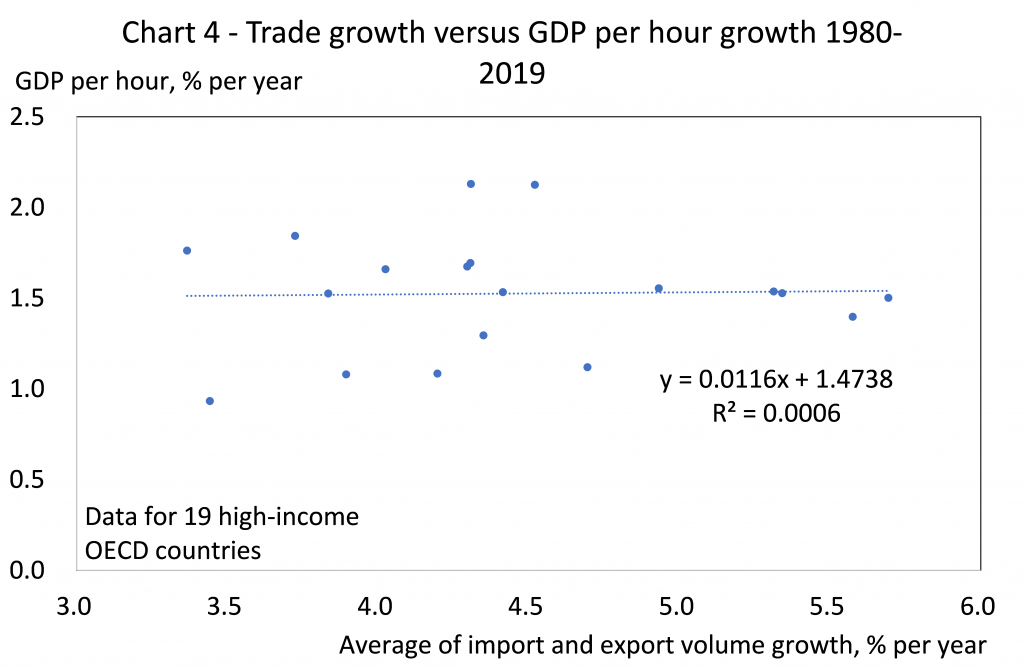 We now turn to the productivity issue. The OBR’s productivity claims are based on analysis dating all the way back to 2016 performed by the UK Treasury and others which is highly contentious. As we first argued three years ago, claims that changes in trade intensity have a strong causal link to productivity are not well supported by the evidence. Indeed, far from the trade-productivity link being well established in the economic literature, the evidence for its existence is at best inconclusive and at worst non-existent.

The literature review in Wales et al. (2018) suggests the weight of evidence favours the notion that productivity drives trade, rather than trade driving productivity. UK Treasury studies which have pushed the trade to productivity link in the past have cited the study by Frankel et al. (1999), but this study admits its results are ‘not very precisely estimated’ and only marginally statistically significant.

The association of trade and productivity growth found in many previous Brexit studies is also frequently based on studying large samples of mostly emerging economies. For high income economies, and for the UK alone, no statistical link between trade and productivity is visible. For a sample of nineteen high-income OECD economies, there is zero correlation between growth in trade and growth in output per hour between 1980 and 2019 (see Chart 4). 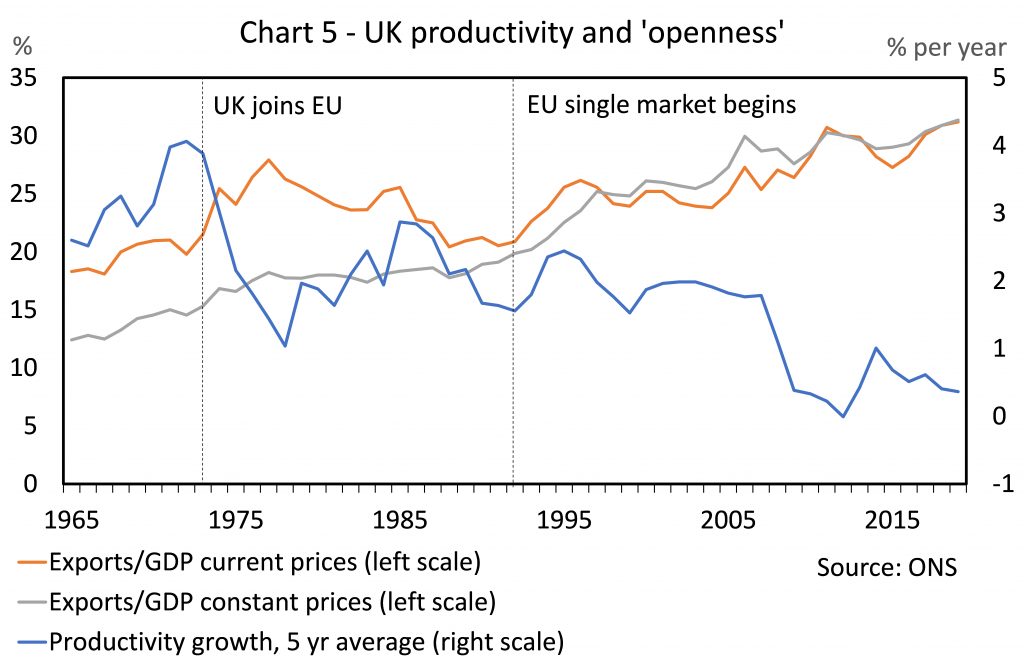 Finally, a firm-level study by the Office for National Statistics (ONS) does not support the notion that Brexit will lead to large negative effects on UK productivity. It shows that exporters to non-EU countries are about 20% more productive than non-exporting firms – but for exporters to the EU, the ‘productivity premium’ over non-exporting firms is minimal. The study also shows evidence of a negative link between export intensity and productivity. These findings make it hard to argue that reduced exports to the EU, resulting from Brexit, would have large negative effects on aggregate UK productivity.

Overall, the OBR’s claim that recent UK economic developments support their view that Brexit will cut long-term GDP by 4% is both unconvincing and arguably misleading. It is based on a questionable interpretation of recent trade data, an interpretation that can also be considered extremely premature given the coronavirus-related distortions (affecting both the supply and demand for UK products and the level and pattern of UK import demand) currently affecting the trade figures.

The OBR claims are also based on continuing to assert a strong link between trade intensity and productivity despite strong evidence such a link may not exist. It is important to note here just how important this questionable trade to productivity link is in underpinning OBR’s claims. Even if the OBR proves to be right about Brexit reducing total UK trade by 15% in the long run (which we think is unlikely) without the productivity effect this would produce only a small long run impact on GDP – most standard economic models would yield an effect of less than 1% of GDP.

It is disappointing and inappropriate that a supposedly independent body like the OBR continues to produce Brexit analyses which are so unbalanced, especially given the continued political sensitivity of the issue.