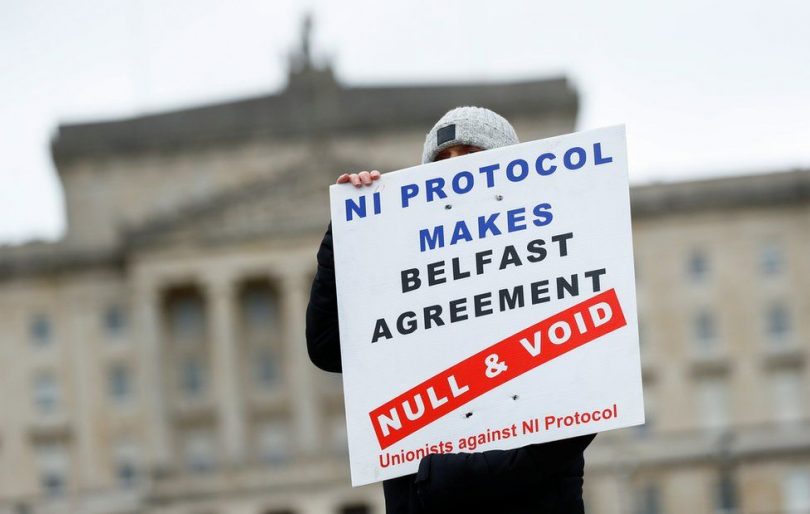 Roderick Crawford argues that it is better for the EU Commission to wake up now to the risk which the potential UK use of safeguards poses to the current protocol and make the concessions that are required. The question may not be whether Johnson knew what he signed, as whether the Commission did.

The jibes thrown at the prime minister over the Northern Ireland Protocol —based on the obvious statement that he signed it — have been that he is either a liar or a fool; a liar because he knew full well what he was signing up to, or a fool for not knowing what he was agreeing to.

Does anyone think that officials told him that the protocol would prevent people in Northern Ireland having access to some cancer drugs? Or guide dogs being unable to move between GB and NI?   Keir Starmer has repeated the jibe about Johnson. A further version is that Johnson did not care if Northern Ireland paid the price so long as the UK left the EU.

There is another view, rarely heard, and it is worth being given a hearing. By the time Johnson had become PM the pass on the Protocol had already been sold — almost certainly back in December 2017 in the Joint Report which has legal effect.  With little credible leverage on the EU,, he had only a few cards to play and he played them.  Unlike the original backstop, he put consent at the heart of the deal, addressing, at least in part, the democratic deficit inherent in EU regulations applying to Northern Ireland without anyone there having a voice on them.

Despite the powers available to the Commission’s representatives, they, like government’s everywhere, would have to act with the democratic sword of Damocles hanging over them.   Ignore the interests of Northern Ireland by insisting on heavy-handed enforcement and there would be a risk that the Assembly would not give its consent to its continued application.  The Commission would surely want to avoid such a humiliation and would be sensible and act proportionately.  Besides, the protocol has plenty of language that can be used to provide the case for light enforcement: these include the key commitment to ‘upholding the Belfast Agreement in al its parts’; this includes the East-West dimension, for there can be no cherry picking of the Belfast Agreement.

It became apparent quite quickly that the Commission had little interest in being practical or respecting the opinion and valid interests of the people of Northern Ireland when they departed from its own take on those interests. The protocol was not simply a means of avoiding a hard border but continued to be both a means of keeping the UK tied into the EU regulatory orbit and a test of UK good faith: only strict compliance to the Commission’s reading of the protocol and the meeting of its concerns, regardless of the costs to the other key aims of the protocol, would suffice to meet this test.

The idea that the consent vote had any relevance to the commission’s approach and language was dismissed from the start.  The protocol, as written and agreed, was permanent and unalterable.  Now this position is not at all in line with the protocol.  Maros Sefcovic, the Commission Vice-President with responsibility for the Withdrawal Agreement and the Trade and Co-operation Agreement, has a constant refrain that ‘there is no alternative to the protocol’.  If that is so, then consent is meaningless and if consent is meaningless then the democratic legitimacy provided by consent is invalidated and with it the legitimacy of the protocol itself.

Did Johnson misread the text of the protocol?  Probably, but not because he is a fool: it reads one way and delivers in another. Did he do all he could to correct it and incentivise the Commission to aim at a light touch regime? Yes he did: getting consent into the protocol was the best that could be done and should have, and still might, shift the Commission’s approach.  He had article 16 safeguards as well as the safeguard of the Northern Ireland Assembly vote that could actually remove the trade element of the protocol with its replacement subject to its conformity with the Belfast Agreement, rather than the wider aims set out in article 1 of the protocol.

The latest attempt to sell the UK a Swiss-style SPS deal may be a sign that the Commission is waking up to the unsustainability of the protocol in its current form whilst attempting to answer that with another shot at keeping the UK in its regulatory orbit.  When this fails, as surely it will, what can they propose then? Though the protocol is imbalanced in terms of its impact on the North-South and East-West dimensions of the Belfast Agreement, it does contain legal criteria, language and other stated aims and commitments that give the UK and the Commission both reasons and means to ensure that the protocol can be implemented practically and acceptably.

The best hope that such reform will come is because of the safeguards that the protocol contains: UK unilateral action under article 16 and the effect of the article 18 consent clause.  Better for the Commission to wake up now to the risk this poses to the current protocol and make the concessions that are required; if it gambles on the vote then it risks finding itself negotiating a new protocol with the UK against the sole criteria of applicability with the Belfast Agreement, criteria that the Commission must now know includes East-West as well as North-South dimensions.  The question, therefore, may not be so much whether Johnson knew what he signed, as whether the Commission did.

Roderick Crawford was the founder and editor of Parliamentary Brief 1992-2012. He runs If You Are Safe I Am Safe, a charity promoting conflict resolution and has worked on the Northern Ireland protocol since 2018.