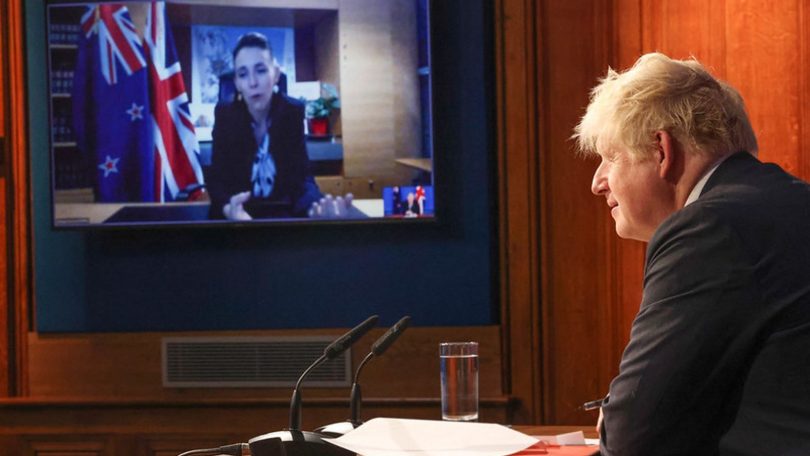 The UK would benefit from importing the food that New Zealand produces more efficiently than the UK or the UK’s other suppliers, if we would only drop our tariffs and quotas. And let’s stop pretending these restrictions are there to help UK farmers – we are already importing these goods in massive quantities from the EU. The loser is the UK public.

The outgoing Australian High Commissioner, The Hon George Brandis QC, complained in an interview with the Financial Times that he was ‘aghast’ at the ‘culture of fear of global trade’ among UK farmers. I am not sure that the farmers are the culprits, it could have been the trade negotiators but if Brandis was aghast by the UK Australian trade deal, the UK New Zealand trade deal does nothing to assuage his judgment.

The UK New Zealand Free Trade Agreement should have been the easiest in history. The two countries have a shared history, culture and language and each country exports what the other imports. However, while New Zealand has removed tariffs on all UK goods, the UK has not returned the compliment. Even though the UK is not able to feed its population without imported food, and three quarters of New Zealand’s exports are agricultural goods, the UK will only gradually lower its high tariffs on these goods over 4 or 8 years and will only increase its small quotas over 5 to 16 years. Why would any nation that relies on imported food do this?

New Zealand went through a farming revolution in the 1980s when it defied common practices and stopped subsidising its farmers. Rather than go out of business, agriculture was turned into a massive export industry. Agricultural exports produce about US$30 billion each year for New Zealand while according to DEFRA’s Agriculture in the UK 2020 page 26 – the UK’s total income from farming was only worth £4.1 billion (US$5.2 billion) in 2020. Roughly one sixth of the value of New Zealand’s agricultural exports.

New Zealand’s agricultural products are competitive internationally because they don’t try to provide all goods to all people. They concentrate on nine product areas where they have a natural advantage: Dairy products, sheepmeat, beef, fish, onions, apples, kiwifruit, honey and wine.

Although New Zealand has a currency advantage, the New Zealand dollar bounces between 1.9 and 2.10 to the British pound, farm wages are higher than in the UK. The medium weekly earnings for Agriculture, forestry, and fishing was NZ$1,096  in June 2021, worth about £563 at today’s exchange rate, and accommodation can be deducted from farm wages, as it can be in the UK. But according to the UK Government publication Agricultural Workers Rights even a Grade 6 (top) agricultural worker in the UK, working 6 days a week would only get £392.34 and could have £4.82 a day deducted for living in a caravan – often mandatory.

Also New Zealand products will have much higher transport costs to most of their markets and especially to the UK, so why were the UK’s trade negotiators so scared about lifting trade barriers on New Zealand’s agricultural products?

The UK already imports large quantities of all of the products New Zealand sells. The UK imports each year: (5-year averages)

New Zealand could help supply the UK with all of these imported products, so why have we agreed to a Potemkin trade agreement instead?

What trade barriers have we not changed?

Incredibly, tariffs on butter, ranging from £1.58/kg to £1.93/kg will only be reduced over 6 years while the quota will be limited to 7,000 tonnes in the first year, increasing to 15,000 tonnes in the fifth year. Even though the UK imports almost 80,000 tonnes of butter each year. Why would the government do this to UK consumers? Although New Zealand’s Anchor butter has been produced in the UK since 2012 to get around these tariffs, other New Zealand butter brands are available. Or at least they will be in 6 years’ time.

Cheese tariffs ranging from £1.16/kg to £1.85/kg will only be reduced over 6 years and quotas will be limited to 24,000 tonnes in the first year and increase to 48,000 tonnes in 5 years’ time. Again, the UK imports almost 500,000 tonnes of cheese each year – so why restrict New Zealand cheese? The UK’s largest cheese import by volume is cheddar from Ireland, so why not let New Zealand’s Mainland compete with it? Or let New Zealand’s Mahoe Gouda compete with the Dutch original? Or let UK consumers try something completely different – New Zealand Airedale. Who are we protecting? Not British farmers, who have to compete with 500,000 tonnes of mainly EU cheese that is imported tariff free every year.

Beef import restrictions are worse – the UK’s high tariffs, ranging from 12% + £1.18/kg to 12% + £2.54/kg, will remain in place for 10 years while tariff free quotas are gradually increased from a mere 12,000 tonnes in the first year to only 38,820 tonnes in 10 years’ time, with additional Product Specific Safeguards in case people import too much New Zealand beef. Why would this be a problem? If supply increases, prices could come down for consumers. The UK already imports about 280,000 tonnes of beef almost all from the EU tariff free and UK consumers eat over one million tonnes of beef each year. It is becoming obvious that the product safeguards are not there to help British consumers any more than they help British farmers.

Sheepmeat tariff free quotas for New Zealand are already large so although the FTA retains tariffs for 16 years while tariff free quotas are gradually increased, imports from New Zealand probably won’t increase. They are already the UK’s biggest out of season lamb supplier. But there is a catch. New Zealand has perfected exporting sheepmeat, by dividing a carcass amongst 40 different markets, only sending countries the cuts of meat they want. This reduces waste and transport costs. But the UK trade deal measures the weight of imported sheepmeat by the equivalent carcass weight. So, for the purposes of calculating the total tariff free quantities, a conversion table can be found on Part 2B-4 of the trade agreement: a whole carcass counts as its actual weight, but boneless cuts of meat must be counted as their weight plus 67% or 81% of their weight.

Why would the UK use this system in their new trade agreement? Weight efficient trade lowers transport costs and emissions: it should be part of the Government’s ‘Green’ agenda. However, equivalent carcass weight was a system of restricting trade inherited from the EU, but the UK is no longer part of the EU so why keep this restriction?

New Zealand onions and shallots will only see the UK’s 8% tariffs reduced over 8 years. While dried onions will see the UK’s 12% tariffs reduced over 8 years. Onions prefer sandy soil and a dry climate, the UK imports a massive 360,000 tonnes each year, so why are we keeping tariffs on New Zealand onions – it is not as if we are self-sufficient. If New Zealand farmers can undercut Spain and the Netherlands – then let them.

Fresh apples will see their seasonal tariffs of 8% (1 Aug – 31 Dec) and 4% (1 Jan – 31 Mar) reduced over 4 years and with quotas limited to 20,000 tonnes for the first 3 years. Fresh cider apples will see 6% tariffs reduced over 8 years, and apple juice will see its 18% to 30% tariffs reduced over 8 years. The UK produced 200,000 tonnes of desert apples and 92,000 tonnes of culinary apples in 2020, but also imports on average almost 360,000 tonnes of apples each year.  Although South Africa was our biggest supplier in 2021, usually it is France, while UK apple juice is mainly imported from Germany, the Netherlands, Poland, and Ireland – all imported tariff and quota free. So why not just drop all tariffs and quotas on New Zealand apples and apple juice as well?

At least New Zealand Manuka honey will see its 16% tariff eliminated immediately. Likewise, the 8% tariff on kiwifruit. How generous of us. But lowering tariffs on these exotic products probably won’t help reduce most weekly shopping bills.

Even products that are not major exports for New Zealand will only have their trade barriers removed over many years. For example, New Zealand exports just over 16,000 tonnes of jams, marmalades and nut purees, the UK imports on average over 75,000 tonnes but still the 20% + £.19/kg tariffs will only be reduced over 4 years. The UK is already a net importer of these products – why would we want to keep tariffs on them if they come from New Zealand?

Rather incredibly even pet food will only see its tariffs ranging from £85/tonne to a whopping £793/tonne reduced over 8 years. The UK imported 600,000 tonnes of pet food in 2021. New Zealand exported just under 24,000 tonnes. Why are we keeping consumer prices high with tariffs – even for our pets?

We will even take 4 years to remove the £1.03/kg tariff off Milk Albumin, who is this helping? The UK only imports about 20,000 tonnes and its biggest suppliers are the Netherlands, then Germany and then the USA. Surely these three suppliers are capable of competing with New Zealand and if New Zealand can undercut them, so much the better for UK food and medicine manufacturers.

What is the point of trade?

The UK really seems to have forgotten why countries trade. The UK population would benefit from importing the goods that New Zealand produces more efficiently than the UK or the UK’s other suppliers if we would only stop making New Zealand products more expensive with tariffs and quotas. And let’s stop pretending these restrictions are there to help UK farmers – we are already importing these goods in massive quantities from the EU.

So, who really losses from the UK’s trade paranoia? Not New Zealand, they have lots of markets for their high quality, well priced products. No, the loser is the UK public, who must continue to buy overpriced products from the EU while we keep tariffs and quotas on two thirds of the nine agricultural products where New Zealand is one of the world’s most efficient suppliers. This is even more ridiculous when you consider that the UK presently imports around 45% of its food and drink by value.

Seriously, what is the point of this trade deal? It is almost as if the UK wanted to claim it has a trade deal with New Zealand, without wanting its population to benefit from it.

If the UK is so scared that they can’t compete with New Zealand products in the UK’s backyard, what chance will UK agricultural products have when they try to compete in New Zealand’s backyard, under the transpacific partnership? Then it will be UK products that have the higher transport costs. Maybe we should be studying how New Zealand agriculture has excelled in nine product areas and try to emulate them rather than limiting UK consumer’s access to goods imported from New Zealand.

Catherine McBride is an economist who writes about trade and agriculture having spent many years trading equity, financial and agricultural commodity derivatives. She is a fellow of the Centre for Brexit Policy think tank and a commissioner on the UK’s Trade and Agriculture Commission scrutinising the UK’s new trade agreements.