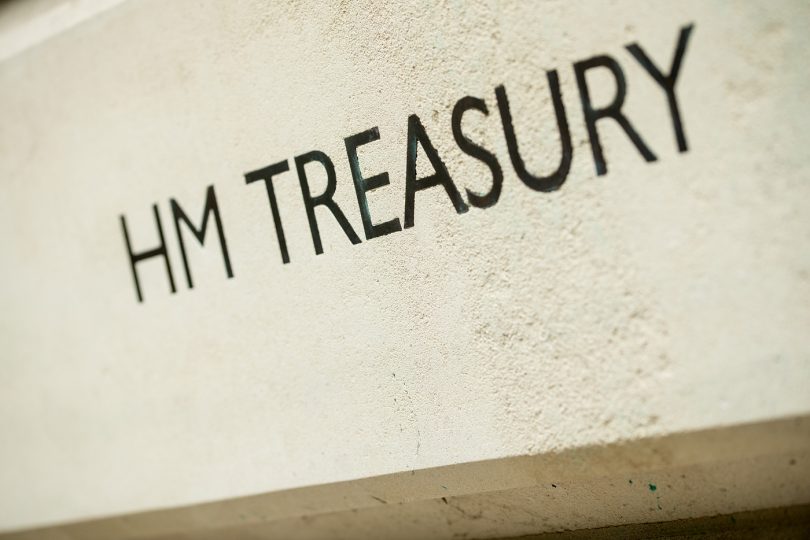 The Treasury claims that UK membership of the EU did not cause any diversion of UK trade away from non-EU trade partners and hence that any UK trade lost due to Brexit will not be redirected to the rest of the world. This article by a senior private sector economist shows that this claim is extreme and is contradicted by a wealth of historical and empirical evidence.’

In its 2016 study of the long-term impact of the UK leaving the EU, the UK Treasury made a number of extreme assumptions in order to generate big negative ‘headline’ numbers for the effect of Brexit on UK GDP.

One of these was that the UK’s membership of the EU had not caused any significant ‘diversion’ of trade away from non-EU trading partners towards the EU. Trade diversion is the replacement of trade with one partner or group of partners by trade with another, resulting from changes in relative trade costs (e.g. raising tariff barriers against one trade partner). It is generally thought to be negative for a country’s welfare as it implies shifting demand towards more expensive and less efficient sources of supply and away from cheaper and more efficient suppliers.

The Treasury then went on to assume that, given no historic trade diversion, Brexit would not generate any increase in UK trade with non-EU countries or any welfare gains from shifting UK trade away from the EU to non-EU suppliers. 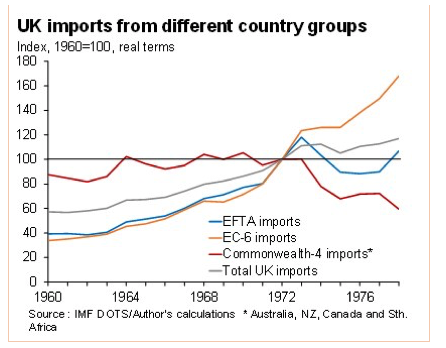 Just how extreme this claim is can be shown by reference to wide range of evidence. First, it flies in the face of the historic record – the pattern of UK trade in the years after the UK joined the EU in 1973 shows evidence of major trade diversion. From 1972-78 (by which time new trade arrangements with the EU had been fully phased in), UK imports from the EU-6 increased by almost 180% in real terms, while UK imports from the EFTA group stagnated and UK imports from the ‘big four’ commonwealth suppliers – Australia, Canada, New Zealand and South Africa – slumped by 44% (see chart). With total UK imports rising around 20% over this period, the evidence of a marked shift away from Commonwealth suppliers (and to a lesser extent EFTA suppliers) to the EU-6 is clear.

This should hardly be surprising given that the UK joining the EU meant the UK abandoning its preferential trading arrangements with the Commonwealth and adopting the EU’s range of high tariff and non-tariff barriers to trade in foodstuffs – this led to a massive deterioration of the competitive position and degree of access of Commonwealth suppliers to the UK market. That such effects would result from the UK joining the EU was considered a given in the years running up to UK accession and was the cause of much soul-searching within the UK and concern in the Commonwealth. Yet apparently the Treasury wishes us to believe this never happened.

Evidence from the interwar period also illustrates the scope for trade diversion from changes in trade protection. After the UK adopted protection and preferences for imperial/commonwealth trade, the pattern of UK trade shifted sharply: the share of UK imports from the Empire and Commonwealth rose from 30% to 42% in less than a decade, from 1929-38 (see De Bromhead et al. 2007).

The Treasury’s claims are also at odd with many empirical studies of the trade creating and trade-diverting impacts of the EU. Much of the literature finds a mix of trade creation and trade diversion by the EU, for example Baldwin and Rieder (2007), Eichengreen and Bayoumi (1995) and studies cited in Ghosh and Yamarik (2004).

Strangely enough, it was not so very long ago that the Treasury itself agreed with this literature: in its unpublished study of 2002 the Treasury estimated the UK’s EU membership had led to trade creation of 7% with EU countries but trade diversion of 3% so that around 40% of the (relatively moderate) trade creation gains were offset by diversion. One can only speculate as to why the Treasury shifted from this relatively mainstream view to a much more extreme one by 2016.

Widely-used models of world trade also do not agree with the Treasury’s 2016 view. An example is the GTAP model developed by Purdue University is a multi-sector, multi-country model that is often used to analyse changes in international trade resulting from trade agreements.

Using this model, Ciuriak et al. (2017) constructed a scenario in which the UK left the EU and shifted to trading on the basis of WTO rules (implying the introduction of tariff and non-tariff barriers between UK and EU trade). Their results show UK bilateral trade with the EU falling by 20-30% by 2030 but total UK trade falling only around 7% which (given EU trade is currently around half the UK total) implies a considerable rise in UK trade with the rest of the world. Similar results are visible in a recent study, also using the GTAP model, by Oxford Economics.

There are plenty of reasons for doubting that UK trade will rapidly and costlessly shift from the EU to the rest of the world – specificity of products, existing supply chains and sheer commercial inertia are all factors that may retard this. Nevertheless, the Treasury’s suggestion that UK exports currently sent to the EU cannot be diverted anywhere else is impossible to take seriously and is contradicted by an abundance of evidence, not least the facts that many firms export similar products to a range of destinations across the world and that UK exports have been re-orientating away from the EU to rest of the world destinations for two decades.

Similarly, it is quite clear that the UK would have, after Brexit, the opportunity to switch from EU imports to rest of the world imports – with potential significant savings in areas like foodstuffs. Reversing the trade diversion in this area caused by EU membership could have wider benefits too – by cutting the cost of living and so potentially boosting competitiveness across a range of other industries. This was an argument used by Sir Robert Peel against agricultural protection as far back as the 1840s and by the likes of Douglas Jay opposing EU membership in the 1960s.