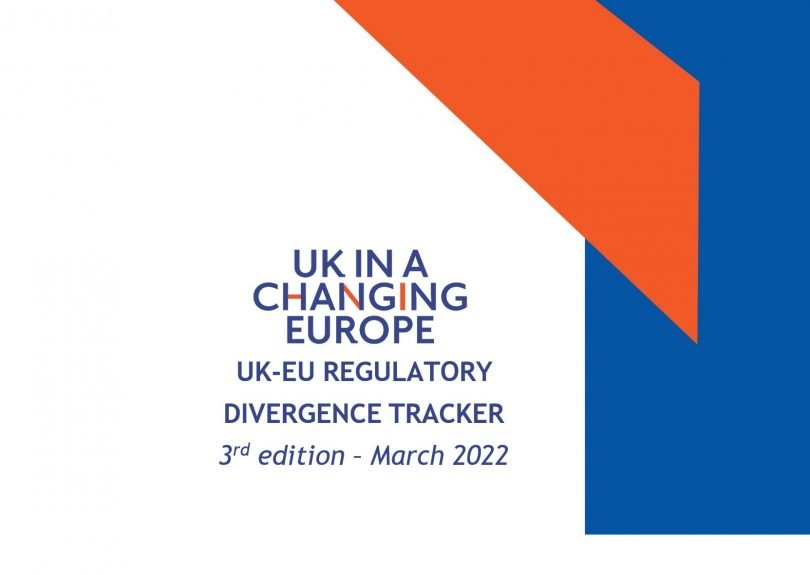 This is the third edition of the UK in a Changing Europe’s UK-EU regulatory divergence tracker, covering 27 cases of divergence since December 2021. We thought it would be useful to record this on the BfB site to keep track of how Brexit is being implemented. This report contains links to the first and second reports.

There have been three important developments since the last edition of the tracker was published. Firstly, Lord Frost has resigned his role as de facto Brexit Minister, replaced by Jacob Rees-Mogg as the first ever Brexit Opportunities Minister in the Cabinet Office. This has also resulted in changes to the wider government architecture for managing the various consequences of Brexit. Rees-Mogg’s unit will be tasked with making the most of post-Brexit regulatory opportunities; while oversight of the UK-EU Trade and Co-operation Agreement (TCA) and Protocol on Ireland/Northern Ireland moves into the Foreign, Commonwealth and Development Office (FCDO); and responsibility for the Union and the review of intergovernmental relations sits in the Department for Levelling Up, Housing and Communities (DLUHC).

This tripartite split of responsibilities may prove a challenge, especially in terms of managing internal divergence – which this tracker shows to be an issue of growing importance. Plans for the UK Shared Prosperity Fund and Professional Qualifications Bill have both been critiqued by devolved governments for potentially diverting major decision-making powers (and in the former case also funding) back to Westminster. Moreover, UK plans for electronic travel documents for visa-free travel could introduce paperwork (albeit not physical infrastructure) for non-UK and -Irish nationals before they cross from Ireland into Northern Ireland, potentially undermining the notion of an entirely open Irish border. An EU Directive on medicines moving from Great Britain to Northern Ireland is a notable example of the UK and EU coming closer to resolving a dispute around the Protocol. However, new EU rules around pharmacovigilance, persistent organic pollutants, energy duties, vehicle safety and the E171 food additive (as well as UK VAT changes on energy-saving materials) will all see Northern Ireland diverge from the UK’s rulebook and could mean Northern Irish traders face new financial and administrative costs which put them at a competitive disadvantage compared to the rest of the UK. The latest conclusions of the review of intergovernmental relations are considered by experts to provide a better structure for engagement between the four UK governments, but to be nonetheless far from sufficient without plenty more political goodwill. With internal divergence issues potentially cutting across at least three different departments at once, there remains a significant risk that the voices of devolved governments might fall through the gaps.

A second key development is the publication of the UK government’s ‘benefits of Brexit’ paper. At 105 pages, it is not short of ideas for Brexit opportunities. However, many could have been realised within the EU, and most were re-cycled from previous announcements. Moreover, there is no sense of strategic priority or weighing up of trade-offs, and the Brexit Opportunities Minister’s decision to invite Sun readers to send in their suggestions for inherited rules to scrap is more likely to create unwanted work for civil servants who have to parse the many responses, than it is to create a clear sense of direction for divergence. One sign that a clearer strategy may be emerging, however, is the new Minister’s reported preference for continued acceptance of EU authorisations such as the CE product mark – although as the tracker shows the government has been quick to state this is not official policy.

A third development is the full-scale Russian invasion of Ukraine. Among the many questions this raises for the UK and the EU’s foreign policies is how to sanction Russian individuals and entities most effectively. UK and EU principles have been relatively aligned, but the UK – operating under its new, independent sanctions regime – was initially slower to impose sanctions than the EU (and US). Limited resources and sub-optimal legislation have been blamed, highlighting the practical and bureaucratic challenges in getting an independent sanctions system to work effectively. Somewhat ironically, emergency UK legislation seeks help the government more easily replicate EU decisions.

More widely, the Treasury again stands out as the department with the most coordinated plans for divergence. Pace is gathering around reforms of existing EU Solvency II insurance rules and the wholesale markets regulation. This reinforces the sense from previous trackers that the department has accepted that there is no prospect of regaining access to the Single Market for UK institutions through equivalence, and is instead actively seeking to loosen some inherited regulations in pursuit of a competitive edge for the UK.

Other cases of active divergence cover a wide range of themes. The new checks at the GB-EU border are creating delays and new administrative costs for business, which plans to digitise export health certificates would only minimally offset. The new trade agreement with New Zealand removes tariffs on exports but is expected to have a minimal impact on UK GDP. Amendments to the Online Safety Bill bolster already significant ambitions to control online harms, and are a notable case of the UK potentially going further than the EU on regulating internet companies, although, paradoxically, concerns have been raised about how much power it could place in the hands of said companies. Plans to reform passenger compensation for domestic flights could also have a significant impact on airline revenues and/or the level of customer refunds, although much depends on the final design of the scheme, while a planned ban on imports of hunting trophies appears mostly symbolic in effect. The TCA removed the recognition of UK Blue Badges in the EU, and the lack of bilateral UK recognition agreements with 11 EU/EEA states including France, Italy, Greece Spain and Portugal considerably limits the travel options available to the UK’s 2.3m Blue Badge holders. Capita’s take-over of the running the Turing Scheme also poses some questions about the scheme’s future cultural value.

In terms of passive divergence, EU has unveiled plans for four major reforms around the themes of ‘digital sovereignty’ and ‘strategic autonomy’. These comprise a mixture of new obligations on the wealthiest companies (Directive on Corporate Sustainability Due Diligence and the Data Act) and measures empowering the EU to protect domestic manufacturing against international competition (the Anti- Coercion Instrument and the Chips Act). In general, there is little likely impact on the UK, as these measures mainly target large state and non-state actors based in the USA and Asia, although there could be more significant implications for UK companies involved in the supply chains of major EU-based companies. More fundamentally, the EU’s plans reflect a significant desire to impose its regulatory weight on big tech and emerging technologies – which raises an important strategic question for the UK in terms of whether to align or diverge via its own future regulation. Will the UK choose to copy or accept major pieces of EU legislation in these areas (EU updates to vehicle safety standards are another relevant case) in order to facilitate trade for businesses engaged in the EU market, and to minimise potential future bureaucracy for business from having to adhere to diverging EU and UK rules? Or will it instead seek competitive advantage in these areas by developing regulatory infrastructure which imposes fewer obligations on companies, potentially attracting investment and boosting innovation, albeit with the risk of greater barriers to trade with the EU? For the time being, the answer remains unclear.