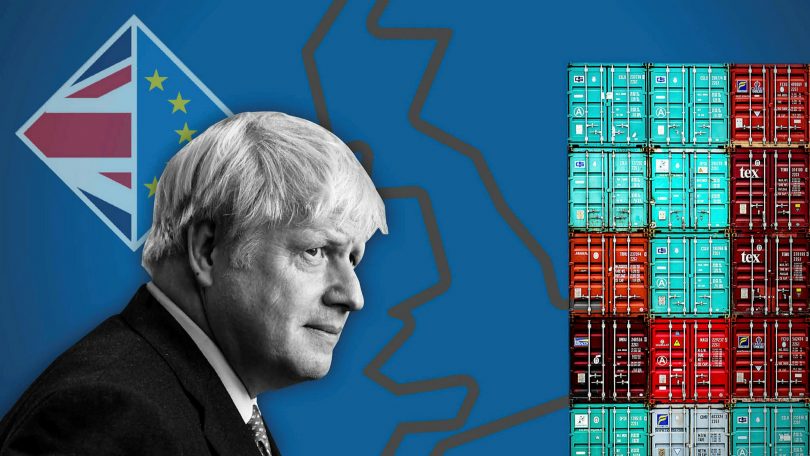 UK exports to the EU continued to recover strongly in May and are now above pre-pandemic levels. The latest data support our long-standing view that claims of huge trade losses after Brexit were massive exaggerations.

UK exports to the EU continued to recover strongly in May and are now above pre-pandemic levels. The latest data support our long-standing view that claims of huge trade losses after Brexit were massive exaggerations. Nor is it clear that UK exports to the EU are underperforming relative to EU demand as some observers have recently claimed. Some sensitive sectors like food and chemicals are lagging, but even here exports have recovered strongly from the disruption seen at the start of 2021.

We have consistently argued, since before the UK’s EU referendum in 2016, that predictions of massive UK export losses post-Brexit were wrong – being based on greatly exaggerated estimates of the scale of post-Brexit trade barriers between the UK and EU. The incoming UK trade data continues to vindicate this point of view.

May data shows UK export volumes to the EU rose a strong 9% on the month. Exports to the EU are now close to the recent peak of December 2020 (which was significantly boosted by stockpiling ahead of the UK’s exit from the single market and customs union) and actually above their pre-pandemic levels. Non-EU exports also continue to grow solidly, by 6.4% on the month in May (see Chart 1). 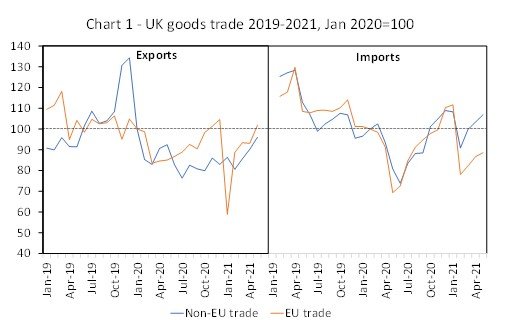 On the import side, imports from the EU remain depressed relative to late 2020 levels and are 12% below the level seen at the start of 2020. Imports from non-EU destinations look much more buoyant and have accounted for over 50% of total imports for the last five months – a share unseen since the current statistical series began in 1997. This likely reflects, in part, the beginning of some shift by UK consumers and firms away from EU goods as the cost advantages of the latter begin to wane. This may go further as the UK begins to open up third country markets with new trade deals.

Confronted with rebounding UK exports to the EU, some observers who previously predicted massive UK trade losses have recently shifted their ground, arguing instead that the rebound of UK sales to the EU represents an underperformance compared to total EU imports or EU demand.

But even this fallback position is getting harder to sustain. Relative to (pre-pandemic) January 2020 levels, UK export volumes to the EU in May were at a similar level to German total import volumes – which are a decent proxy for overall eurozone import volumes. Looking at total eurozone non-EU imports (only available in value terms and with partial data for May), there is a small gap of 2.8% (see Chart 2). But even if we assume all this gap is due to higher trade barriers facing UK exports (which it may well not be), it is a tiny impact compared to claims that UK exports might fall by up to 40% as some past analyses have claimed. Instead, it is rather a vindication of careful and unbiased studies such as that by Kee and Nicita in 2017 who argued UK exports to the EU might only fall around 2% after Brexit. 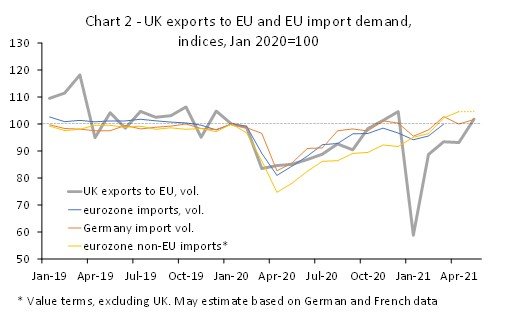 Looking at the product level, a very varied picture emerges. A number of UK sectors such as raw materials, machinery and electrical machinery, metals, and beverages saw May exports to the EU 15% or more above the level in the second half of 2020. These sectors also saw strong growth in non-EU exports. Export performance was less impressive in sectors potentially most sensitive to new trade barriers such as food, fishing, chemicals, and clothing (Chart 3). But apart from clothing (where the problem relates to the UK no longer working as destination from which to re-export goods imported from the far east), all these sectors have seen exports rebound quite strongly in recent months from low levels in early 2021. 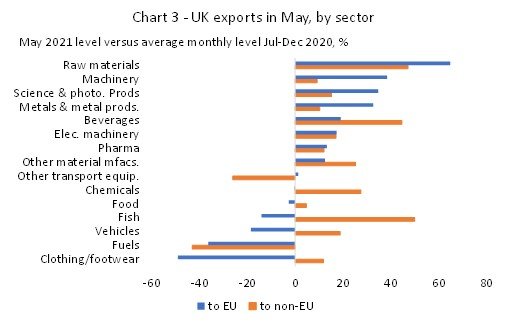 The country-level data also show a mixed picture. On the export side, sales to Belgium and the Netherlands were strongly up in May versus the levels of the second half of 2020 – by 45% and 32% respectively. Sales to Italy and France (again, despite media stories focusing on border problems) have also rebounded strongly. Among the UK’s top EU trade partners, the least impressive recovery in exports is to the Republic of Ireland (Chart 4). Imports from Ireland have also weakened more than for most major trade partners. This may reflect a focus on food trade, but also probably reflects some re-routing of goods via Northern Ireland (see our recent piece). 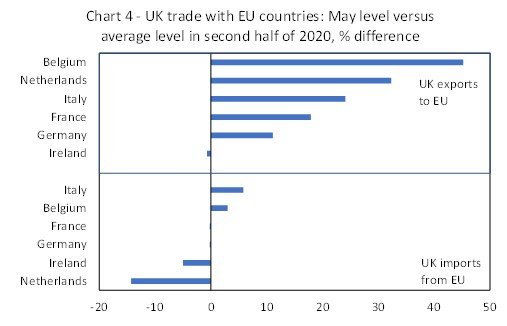 Overall, the picture looks positive. UK exports to the EU in May continued to grow strongly, with decent performances even in sectors most vulnerable to higher trade barriers. There is no evidence from the UK data of the export catastrophe widely predicted over the last five years.

There is one final pessimistic argument that should be rebutted. This relates to the EU (Eurostat) data showing a more negative picture, with somewhat lower UK exports to the EU and a weaker rebound from the disruption at the start of the year. The UK ONS has now published a useful blog on this. It appears that the gap between UK and EU estimates of UK exports to the EU results from changes in the way UK exports are measured by the EU. Before January 1st, the EU measured UK goods imported into the UK, and then resold to the EU, as imports from the UK. They now no longer do this, instead recording these trade flows according to the country of origin rather than the country of dispatch. As the UK data are being reported on a more consistent basis, these are the better guide to what is actually happening.