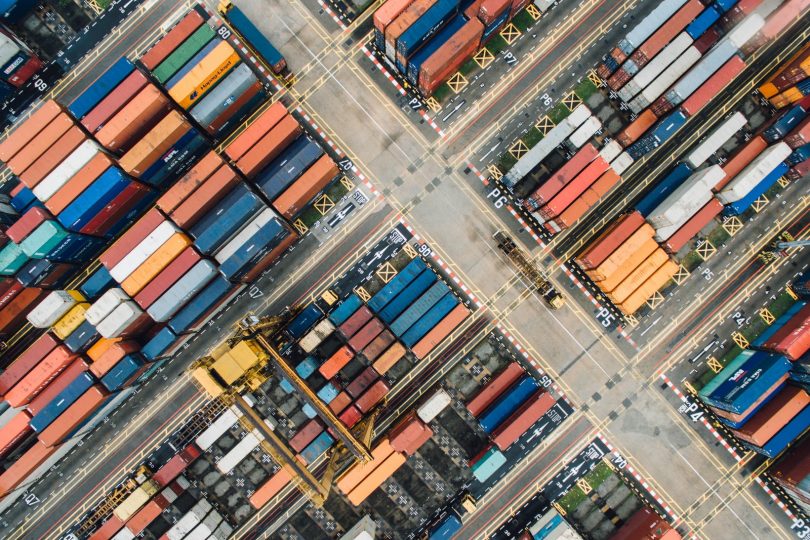 Interpreting UK export data in 2021 is complicated by statistical distortions and the lingering impact of the coronavirus pandemic. But a few trends look clear. Underlying sales of goods to the EU have held up much better than Remainers claimed they would, with survey evidence more upbeat than the official figures. There has been extensive re-routing of sales to Ireland via Northern Ireland. And concerns about services exports looked to have been largely unfounded with financial services exports re-orientating to non-EU markets.

Ex-Bank of England governor Mervyn (now Lord) King famously remarked that we should never read anything into the UK’s monthly trade figures due to statistical anomalies and the tendency for them to be revised dramatically over time. This warning is probably even more appropriate at the current juncture, given that trade figures have been affected over the last two years by the coronavirus pandemic and by the UK’s exit from the EU single market and customs union, which has created a new set of distortions to measurement of exports and imports.

Nevertheless, we think the data, even with its imperfections, can provide us with some useful information. Below, we look at three broad areas – the overall performance of UK exports, especially sales to the EU; exports to Ireland; and exports of services particularly financial services. The pattern that emerges is one of resilience – in sharp contrast to the ongoing, overblown claims of Remainers that Brexit has hugely damaged the UK’s trade performance.

Overall performance in exports of goods

Over the period 2016-2020, there were widespread claims by politicians, lobby groups and academics that UK exports to the EU would fall dramatically once the UK left the EU single market and customs union. Some modelling exercises claimed declines of up to 40% were likely, and in the early weeks of 2021, when UK exports to the EU did fall sharply, some Remainer commentators claimed these studies had been vindicated. 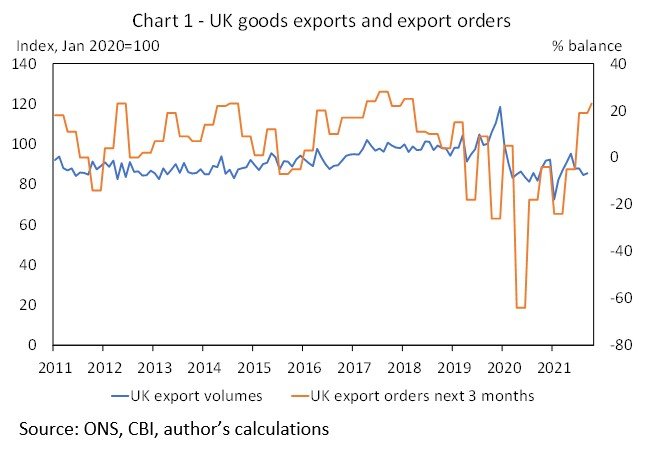 These claims soon turned out to be baseless. As we argued in March, trade at the start of the year was depressed due to late 2020 stockpiling, firms delaying moving goods due to fears of disruption and problems adjusting to new border processes (which firms had very little time to get used to given the last-minute nature of the UK-EU trade deal). Once these effects faded, UK exports to the EU rebounded quickly to broadly regain their previous levels.

Subsequently, Remainers have shifted their ground and now claim UK exports may not have collapsed but are still doing much worse than they might have done, had the UK stayed in the EU. But even this less dramatic claim is hard to stand up based on a careful reading of the data. In September, UK total exports of goods were about 15% lower than in the same month of 2019 (the best base of comparison given 2020 pandemic distortions). But it would be wrong to read too much of a ‘Brexit effect’ into this shortfall for several reasons: 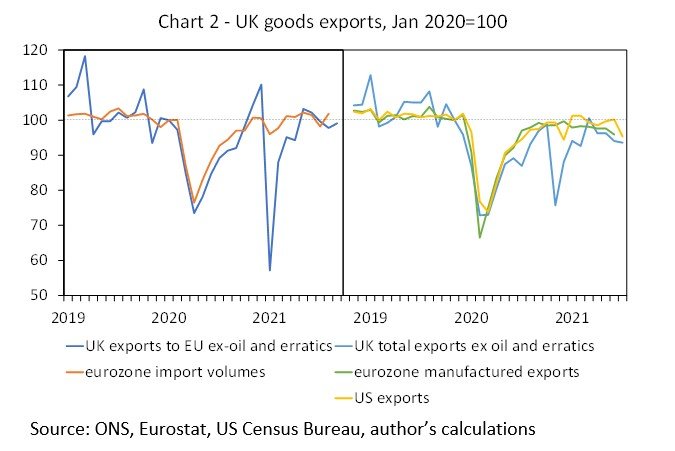 If we strip out the various distorted and erratic items, we can see that UK exports of goods to the EU have tracked EU demand fairly closely over recent months, with no evidence of a large effect from trade barriers. Total UK exports of goods ex-oil and erratics have underperformed US and eurozone exports of manufactures, but only modestly, by around 5% (versus 2019) and as noted above this is mainly due to weaker sales to non-EU countries (see Chart 2).

Faced with this data, which shows at worst a rather small underperformance of UK exports, Remainers are instead now referring to studies based on tortuously constructing supposed counterfactual paths for UK exports based on the trade data of other countries – often countries with very different economic structures and trade patterns and varied policy approaches. This approach is deeply dubious in our view. Among other issues, as others have noted, the way these supposed counterfactual paths for UK trade have been constructed has tended to shift significantly over time to obtain a ‘good’ fit.

Overall, then, after nine months it looks like underlying UK export performance has held up far better than many observers claimed it would after leaving the EU single market and customs union. We do not claim higher trade barriers have had no impact, but the impact looks to be moderate – this in turn implies that earlier very large estimates of the scale of EU trade barriers were overstated (as we consistently argued they were). Indeed, even where barriers are undoubtedly highest, in agri-food products, UK exports to the EU have held up remarkably well.

Exports of Goods to Ireland

Interpreting the figures for UK trade with Ireland since the start of this year is particularly difficult. This is because the combination of the partial creation of a trade border in the Irish sea between GB and NI (ameliorated via grace periods on important categories of goods), the creation of customs borders between Ireland and GB, and the NI protocol maintaining an open border in Ireland has led to massive re-routing of trade flows. Specifically –

Given the way that Irish trade statistics in particular are collected, these shifts in trade routes are creating major distortions in the measurement of cross-border trade. In particular, it is likely that a substantial chunk of the increase in sales from NI to the Republic reported by Irish statistics are actually goods that originated in GB – as we have previously argued. Port freight data are also now of limited use as a proxy for trade flows, especially between GB and NI. 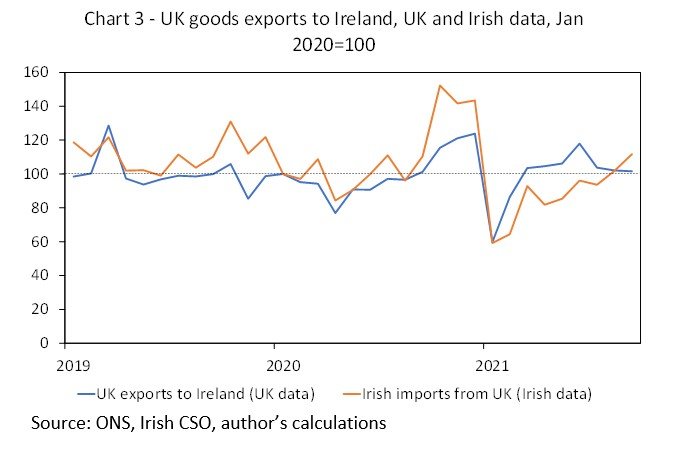 In the early part of 2021, a significant anomaly in the measurement of UK-Irish trade emerged, with UK data showing much stronger UK to Ireland flows (i.e. UK exports) than the Irish data did. We speculated at the time that this might be due to changes in the measurement of UK exports on the Irish side, specifically Irish data no longer counting goods coming from the UK whose origin was in the rest of the world (i.e. re-exports) as UK goods. Intriguingly, this anomaly has now disappeared. The latest figures from the Irish side now show total imports from the UK higher than the UK data suggest (Chart 3) and back at ‘normal’ levels.

But what has changed is the Northern Ireland share in the UK total of sales to Ireland – now at almost a quarter versus a historic level of 10-15%. It seems that UK exporters may have circumvented EU trade barriers at Dublin and other Irish ports by routing goods through NI.

If the flat trend in UK to Ireland exports over the last three years looks disappointing, it should not really be considered so. UK sales to Ireland have been growing very slowly for the last two decades – at just 0.4% per year, with a marked decoupling from the broader trend in total Irish imports since around 2014 – note this is a pre-Brexit date (Chart 4). Irish customers have been shifting from UK goods for some time, or UK exporters have been losing interest in the Irish market. 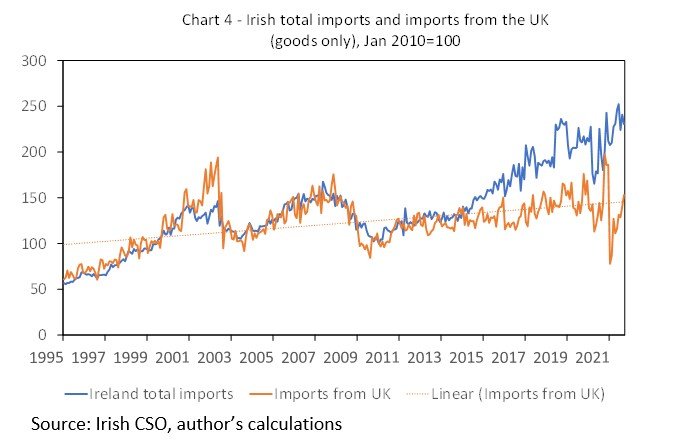 One crude approach is to look at UK services exports excluding travel and transport, the two sectors worst affected by the pandemic. If we do this, we find that UK services exports to the EU (ex-travel and transport) have edged down slightly, by 3%, in the first half of 2021 versus the same period in 2020. They are about 6% lower than in the first half of 2019. Some of this will certainly be pandemic-related as excluding travel and transport does not capture all the pandemic effect. So, there is no sign here of a collapse in sales of services to the EU from leaving the EU single market.

Some observers have claimed a longer-term negative effect on UK exports of services to the EU dating back to the referendum in 2016. We dealt with that issue in another recent piece – like most such assertions, it is not backed up by the available evidence: in fact, UK services exports seem to have performed better since 2015 than those of key competitors such as the US or France. 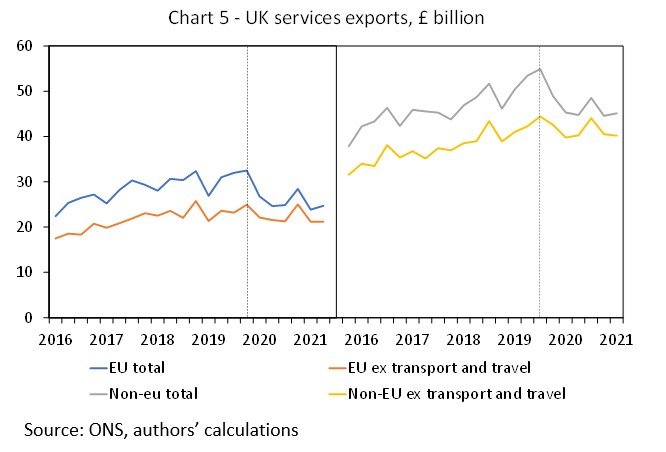 What about financial services exports? These were the subject of some of the most lurid pre-Brexit doom stories, with claims that the UK finance industry might shrink dramatically with a mass exodus of firms and workers to the EU. Some studies claimed hundreds of thousands of jobs would be lost and financial services exports might shrink by a quarter. 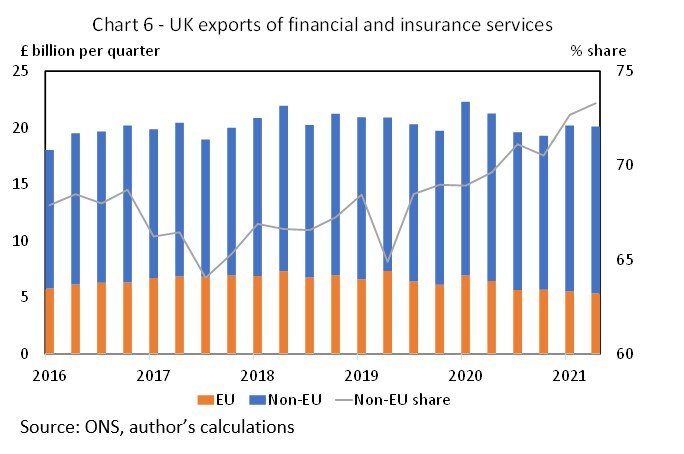 The claims on job losses have already proved laughably inaccurate, with industry estimates now suggesting just a few thousand roles have moved to the EU or been created there due to Brexit – a process that has already largely ended. London has also maintained, and even strengthened, its position as a global financial centre especially in areas like FX trading.

The available trade data largely back this picture up – financial services exports have been steady over recent quarters. However, there does seem to be something of a geographical shift going on. Sales to the EU have trended lower since 2019, but sales to non-EU destinations have picked up. As a result, the share of non-EU sales in total financial services exports has risen to 73% from 65% (see Chart 6).

It is possible that some of this shift is of the smoke and mirrors kind, with some business being routed through non-EU destinations even where EU entities are the final customer, but there is no hard evidence to this effect. In any case, what this shows is that the orientation of the important UK financial services sector is now overwhelmingly to non-EU markets. On this basis, any thought of shadowing EU financial regulations to preserve trade with the EU is quite redundant.