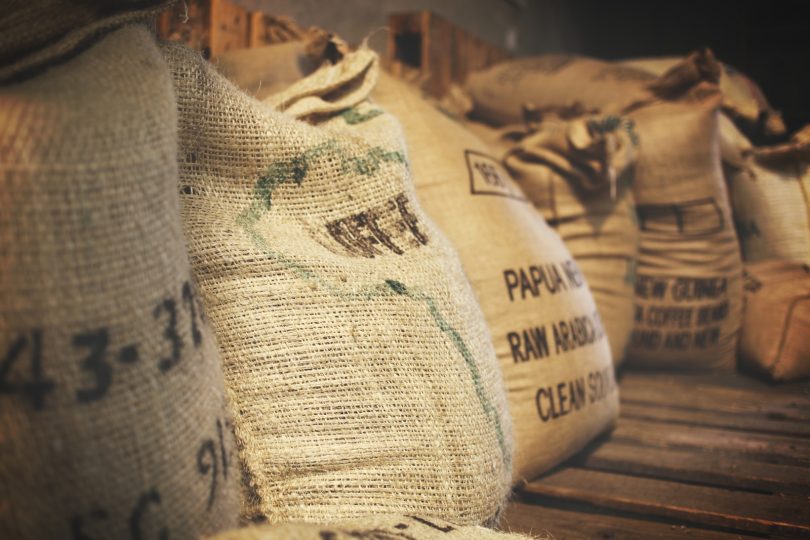 Remainers continue to claim that UK food exports are performing disastrously. But their claims rely on misleading or outdated figures and ignore the recent trajectory of UK overseas food and drink sales.

While some subsectors have seen a clear fall in sales, in June overall UK sales of food and drink to the EU were slightly above pre-pandemic levels. This outcome is dramatically at variance with Remainer claims over the last five years that UK food and drink exports to the EU would be decimated by massive non-tariff barriers to trade. Moreover, with exports to non-EU destinations growing fast and full border controls on EU food imports due to come in next month, the UK food industry has opportunities to divert sales away from EU markets.

We recently noted that UK Remainers are increasingly resorting to exaggerating adjustment problems in some sectors of UK business in an attempt to keep a ‘Project Fear’ narrative going. Nowhere is this truer than in the food and drink sector.

In the run-up to the 2016 EU referendum, and in the years since, Remainers and some industry lobby groups repeatedly claimed that UK food and drink sales to the EU would be hugely reduced by the UK leaving the EU customs union and single market. Even with a tariff-free trade deal, it was argued, UK exports would drop steeply due to high non-tariff barriers to food trade (including border formalities and regulatory compliance costs).

Some lobby groups are still playing this tune. The Food and Drink Federation (FDF) recently produced a report arguing that UK food and drink exports to the EU had fallen ‘by £2 billion’ which was gleefully seized upon by Remainers as a vindication of their earlier warnings. But in fact, the data does not support their catastrophising at all. 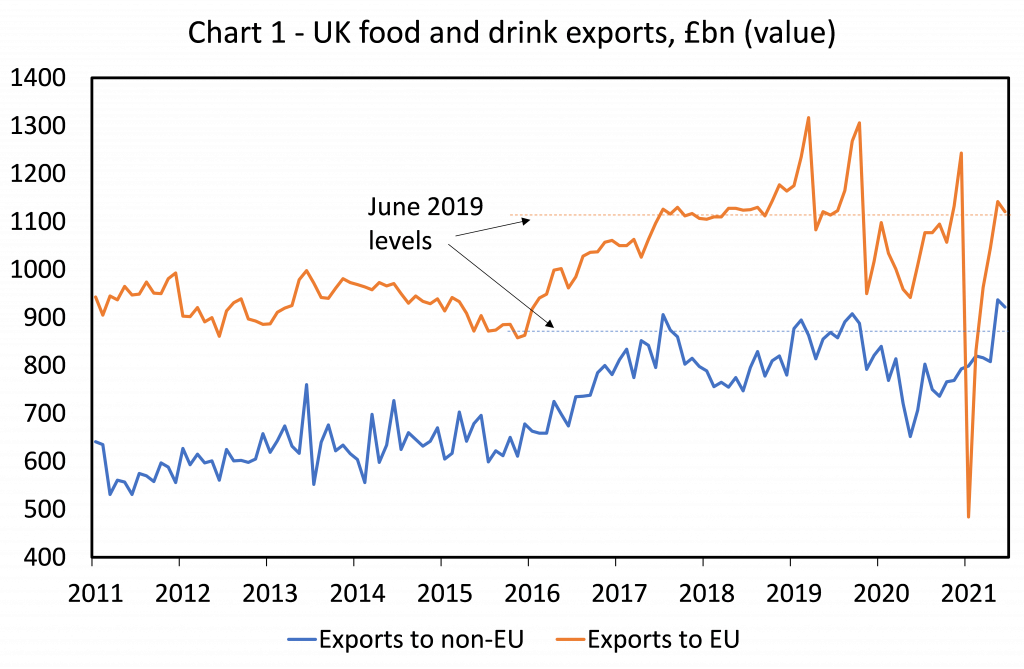 It is true that in January and February of this year, there was a significant interruption to UK food and drink sales to the EU, which reflected a variety of factors including border disruptions, stockpiling at the end of 2020 ahead of the UK leaving the single market and customs union, and the impact of Covid-related lockdowns.

But as with other UK exports, the pattern has changed significantly since then, with UK exports to the EU of food and drink recovering strongly. In June, the value of such exports to the EU was slightly higher than the pre-pandemic level of January 2020 and also a shade above the level recorded in June 2019 (Chart 1). Mixing in the highly disrupted early months of 2021 with the later months, when businesses had had time to adjust to new trading arrangements, is misleading. The more recent data is a much better guide to the ultimate impact of Brexit on UK food and drink sales. 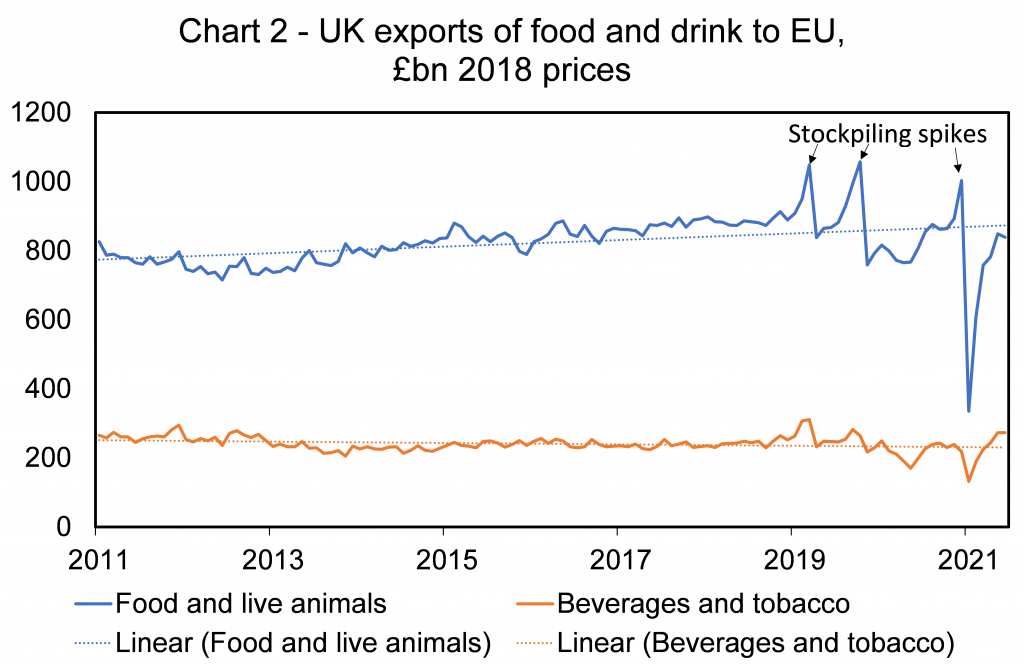 To be clear, we are not suggesting that new border processes and other trade barriers have had no effect on UK exports of food and drink to the EU. But the size of the permanent effect (as opposed to the temporary disruption at the start of the year) appears to be small so far. In June, food and drink exports to non-EU countries were 6% above June 2019 levels, versus 1% above for exports to the EU. So, assuming both might have grown at the same pace in a no-Brexit world, that might suggest EU exports have been permanently reduced by 5%. Looking instead at the volume of exports of food to the EU, June’s sales were perhaps 4% below the long-term trend (Chart 2). 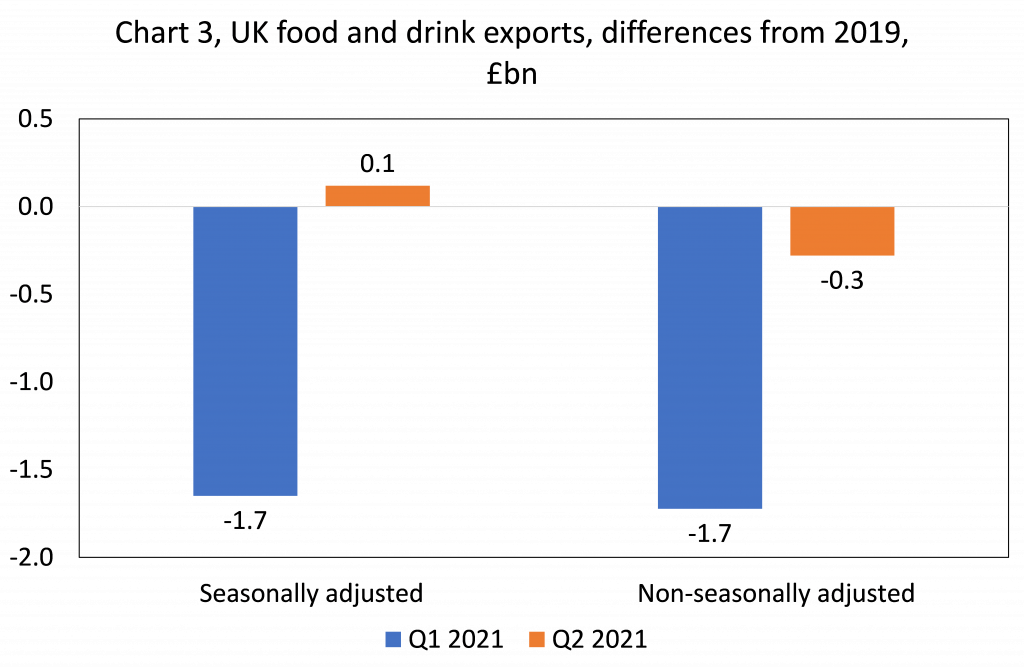 Even these modest numbers may be upper bound estimates, as part of the rise in exports of food to non-EU destinations may reflect a diversion of sales from EU markets. The long-term trend is also hard to measure after 2019 given substantial volatility. And notably, drinks exports to the EU are now actually above their long-term trend. 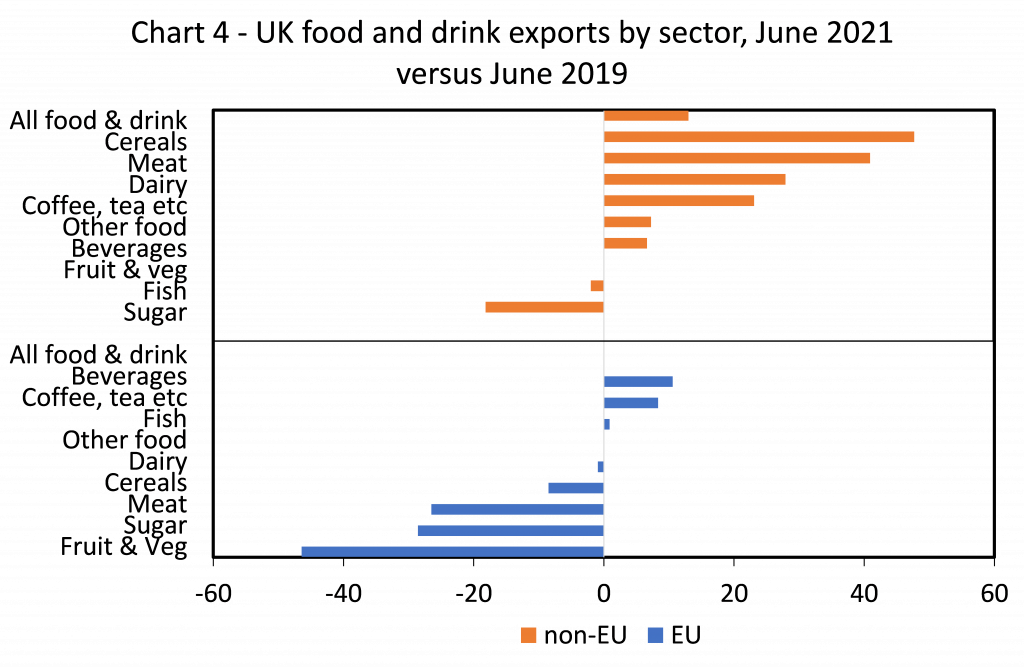 We are also not claiming that some sectors within the food and drink industry have not encountered significant problems due to the new trade arrangements. Fruit and veg, sugar and meat sales to the EU in June were all considerably lower than in the same month in 2019 (note the first two are relatively small export sectors). However, beverages and coffee and tea sales were higher and dairy, other food products and – remarkably – fish sales, all held up very well. As a result, aggregate sales to the EU were broadly flat. Meanwhile, several sectors recorded strong rises in sales to non-EU destinations – cereals, meat, dairy and coffee and tea sales to non-EU countries were 20-50% higher in June 2021 than in June 2019 (Chart 4).

This is a pattern of structural adjustment, not one of disastrous industry-wide collapse. And it is very important to understand just how at variance this outcome is with the claims of the Remainers. According to the Remain story, non-tariff barriers to exports of food and drink products to the EU were going to be perhaps 15-20% of export values and the resulting – permanent – decline in UK exports of these products to the EU would be 30-40%, assuming a modest price elasticity of around two. Moreover, it was also repeatedly claimed that there was little or no scope to expand exports of food and drink to non-EU countries.

The UK leaving the EU single market and customs union was always going to be a significant challenge for the food and drink sector. Producers of fresh produce and small-scale producers (for whom new border processes weigh most heavily) face the sternest challenges and there is going to be a long-term decline in sales to the EU from these parts of the industry. But the evidence so far suggests that the scale of the aggregate decline in food and drink exports to the EU could be remarkably small, with a number of subsectors performing well.

In addition, UK food and drink producers have other outlets for their goods. As noted, sales to non-EU countries are rising strongly and will be further assisted by new trade deals. The implementation of full border checks on EU food imports from this October is also likely to open up substantial opportunities for import substitution. EU exports of food to the UK have already dipped a little, and the share of non-EU food imports in the total has risen by around three percentage points from 27% to 30% (Chart 5).

But the share of non-European goods in UK food imports was around 60% before the UK joined the EU so there could be significant further gains to come for both non-EU producers and UK producers, as imports from the EU become relatively more expensive. An obvious straw in the wind here are the decisions of various UK supermarkets to end sourcing of beef from the Irish Republic and concentrate on UK supplies. 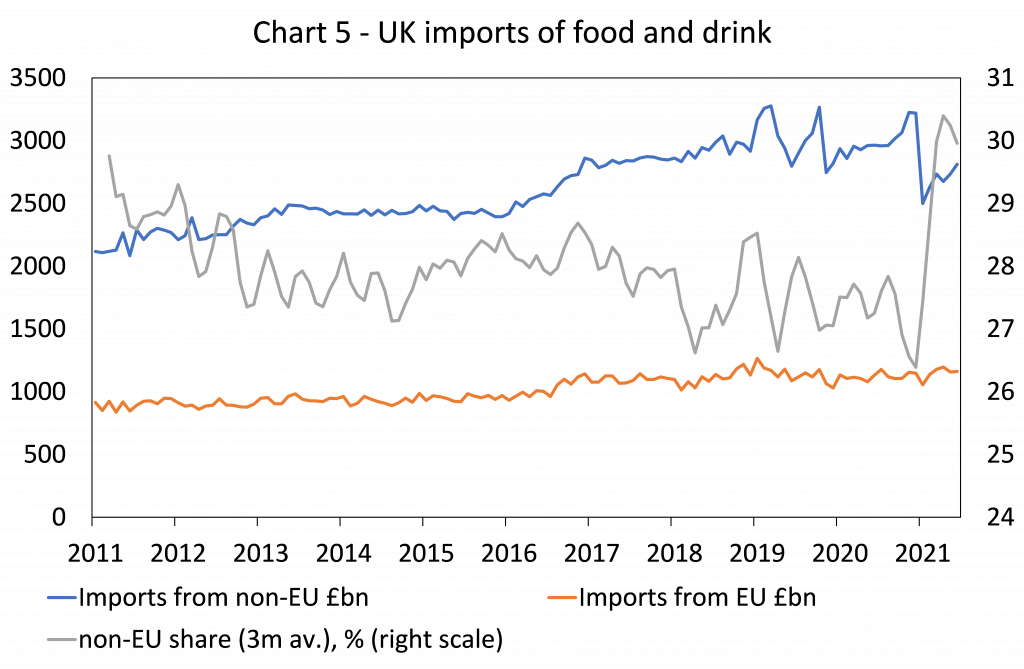