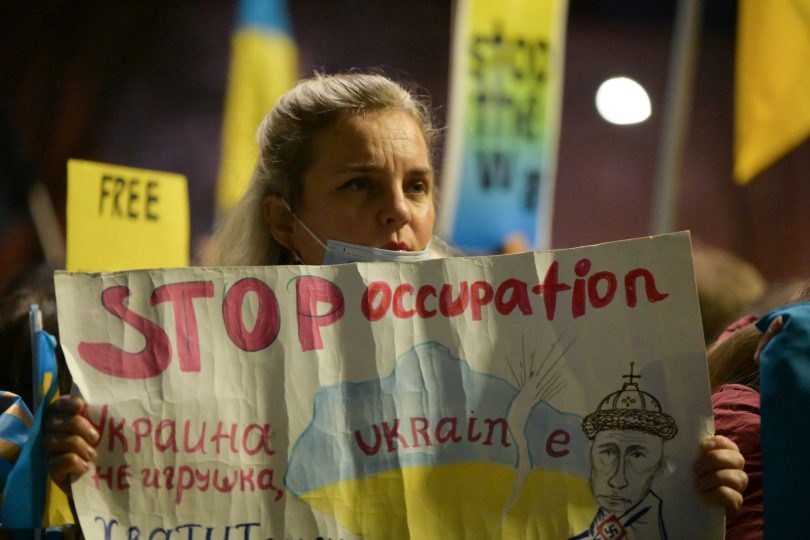 Recent days have seen a G7 Summit beside a German lake, NATO meeting in Madrid, and the Swiss hosting an attempt to find a way to peace and reconstruction of Ukraine from the relaxing tranquillity of Lugano.

Recent days have seen a G7 Summit beside a German lake, NATO meeting in Madrid, and the Swiss hosting an attempt to find a way to peace and reconstruction of Ukraine from the relaxing tranquillity of Lugano. I think Federal Councillor Ignacio Cassis was a brave man to go ahead but at least as a well-intentioned and genuine neutral he helped clear the air a little more and stimulate pledges for several billions of money. Forty countries and eighteen organisations attended. Liz Truss warned that we cannot trust the word of Putin.

Boris’s EU friends and allies are far from united. Indeed, Herr Scholz and Ursula von der Leyen, who run Europe since the French election, just about pay lip service to whatever communiques they sign up to after these pow wows.

Russia bombarded the outskirts of Kiev before the G7 and before NATO met in Madrid a Russian missile strike hit a shopping mall in the small town of Kremenchuk near Poltava. ( Where Peter the Great defeated Charles XII of Sweden on the 8 July 1709, one of the decisive battles in history.) About a 1000 civilians were inside the mall, at least a dozen were killed and many more injured. More further down on the state of the invading Russian army.

The usefulness of these summits can be judged as much by what wasn’t announced as by what was trumpeted to the North American networks.

EU customers for Russian oil and gas paid for Putin’s modernisation of Russia’s nuclear armed forces and have been paying for the Russian invasion of its peaceful, democratic and successful neighbour since the build up along the frontiers last winter. Germany imports 49% of its gas consumption from Russia, Italy 41% and France 29%. Oil consumption is less, about half the above but dependence remains significant. Joe Biden’s horrendously dated back-slapping has no impact on square-headed accountants and bankers in Dusseldorf and Frankfurt. They and their Paris business rivals both have invested each year for the last several years half a trillion Euros in modernising and expanding production in the Russian economy. They both want business as usual as fast as possible. The Russians can breathe a sigh of relief at their silence – raise the price of gas and oil even higher then focus on stealing the Ukrainian farmers’ grain harvest.

Before turning to the NATO meeting let me help keep your diplomatic bearings. Mr Sefcovic accused Britain of splitting the West at a crucial time by passing a law aimed at making UK law paramount within part of the UK.  Whereas the EU are responsible for the situation that gave Russia an excuse to invade Ukraine, seize the Crimea and three quarters of two eastern regions in 2014. Today the EU are blocking Russian access to the Kalingrad enclave – a chunk of the old East Prussia before 1945.  (A long time ago our friend Hubert von Blucher had a family castle there – he threw grenades into the champagne cellar one winter night that year. He put the best pictures in his motorbike sidecar — including a Rembrandt — and hurried west.)  War is dangerously possible by accident between Russia and NATO over this interface between the new German empire and Russia’s to both east and north.

NATO reacted clearly so Russia could not fail to understand the alliance’s message.

Reinforcements in the Baltics by Americans, Brits, Germans and Dutch. A British aircraft carrier group stationed in the Eastern Mediterranean as well as RAF NEAF based on Cyprus. Two USN destroyers are to be based in Spain. This would allow a British aircraft carrier to add an Aegis destroyer or even a pair to its escort force. NATO intends to increase its standby forces from 40,000 to 300,000. Reaching this target may be easier than one thinks if you add the Swedish and Finnish armed forces overnight. The Americans will base another pair of F 35 squadrons in East Anglia, bringing their strength to a pair of wings with about 100 aircraft. Given the performance of the Russian Air Force over Ukraine and eventually nearly 140 British F 35s, that’s an important deterrent force.

The US Navy are pleased to welcome the Swedes and Finns. For many years both navies have trained alongside the US Navy and are high end technology forces. As global warming melts the ice in the high Arctic so will arise the possibility of sending fleets to and from Asia by transiting the top of the World.

Meanwhile on The Battlefields

Russian forces have likely secured Luhansk Oblast although there may still be some Ukrainian resistance. Where the Ukrainians will draw the next line is not yet clear. They have given ground, finally, but inflicted severe casualties on Russia’s troops and destroyed a great amount of their equipment. On the 6 July the Russians made no claims to any further Ukrainian ground, a first after 133 days of war. Small actions take place on all fronts but appear unsuccessful.

The Institute of the Study of War (ISW) team in Washington DC believe this indicates an operational pause, when offensive operations may continue on a small scale while the main forces regroup and rebuild combat power to set the conditions for their next major offensive. This assessment was confirmed by the Russian Defence Ministry spokesman on Thursday 7 July.

None-the-less, the war has exposed some serious structural weaknesses of the Russian army starting with its methods and systems of command and control. Officer quality is low and what we regard as NCOs seem rare birds. Russian logistics methods are more like those at Tannenberg in 1914 than 2022. Supplies, ammunition, vehicles, tanks and artillery are moved by rail as far as possible and only the final stages made by road. Heavy ammunition is shifted by hand from rail wagon to truck; cranes and fork lifts don’t feature.

Consequently the Ukrainians target railway stations and nearby ammunition and stores dumps. Most likely US provided HIMARS rocket artillery systems were used to strike an ammunition depot at Melipotol airfield on the 3 July. Two strikes hit one of four Russian depots in the town.

Russia’s command system belongs to the nineteenth century – unless your country is a dictatorship with rigged elections and only the politically reliable are allowed any kind of authority or initiative.

The Kremlin is preparing for a long war. Not simply with bold words but also cunning legislation. Speeches are given that repeat Putin’s aim to absorb the whole of Ukraine into Russia. Military nationalists are critics of the execution, not the ambition. Occupied areas face laws that will absorb them into Russia. Covert conscription is enforced in the occupied areas. Russian industry faces tighter laws which allow the government to enforce new contracts on workers and industries – a lot of equipment needs replacing, and workers may be required to work at night or weekends for pay decided by the Kremlin. Covert industrial mobilisation is under way.

Ukrainian forces have recaptured Snake Island which the Russians quickly bombed with phosphorus weapons to destroy all the top end electronics their garrison abandoned. The port of Odessa is no longer monitored from Snake Island thereby opening up the possibility of international agreement to deliver grain to all those people who depend on Ukraine for their supply.

Zelensky won’t like the news about Boris being treated worse than Margaret Thatcher. Nor do I.

The Past May Hold the Future

As a young diplomat in Berne during the late 1970s one of my big jobs was evolving with the Swiss how the neutrals would pursue their role in the future Organisation for Security and Co-operation in Europe (OSCE). All manner of ideas were suggested. The Cold War was running warm.

Nearly fifty years later talking to a friend this week who leads his country’s delegation to OSCE, neither NATO, Ukraine nor Russia has made much use of the OSCE structure that’s in place and ready. Yet I gather the Russian delegation are anxious to keep the door open. I would encourage them although I asked if they were aware of the damage this war is doing to the future of their country’s relations with most of the others who have any money? And I’m not talking about their German and French investors. The former has its first trade deficit since 1991 and are hardly going to thank Putin for its steeply rising energy prices anymore than thank Britain for declining to give the EU a present of £40 billions a year ever increasing.

Yes, he said, they are and keen to open a dialogue whenever that moment comes.

Perhaps someone, somewhere is talking. Perhaps not, because it’s still too early. We need a change of behaviour and approach from the Russians. Who would trust Putin and Lavrov? Who would trust a neighbour who smashes your cities to rubble because their economic growth was nine times faster? Who lets gangs of rapists and murderers loose on your country villages? These messages will go to the Russians but Ukraine with a force capable of strategic manoeuvre may talk louder. Dare I suggest that NATO should deploy along both routes.