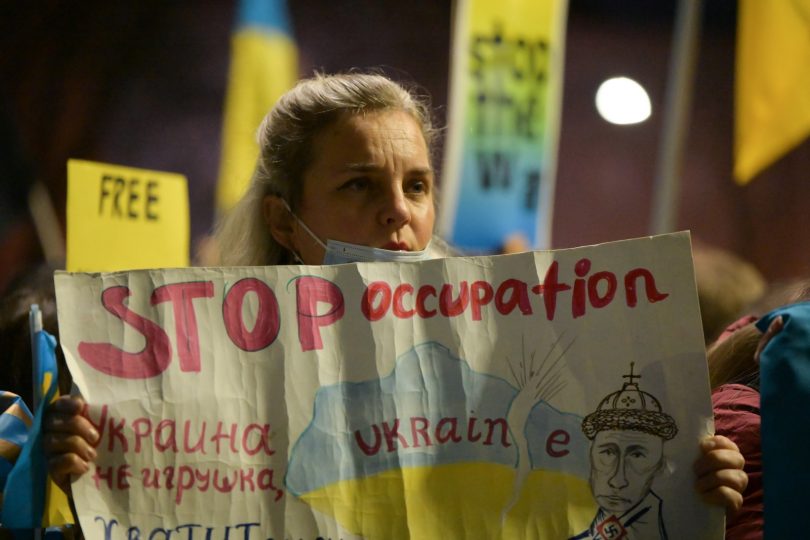 We intend to publish updates from former soldier and diplomat Adrian Hill, one of our regular correspondents

Reports from BBC World News tell of another Russian atrocity. On Thursday 7 April they attacked the railway line in eastern Ukraine, stranding thousands at the only railway station for miles. On the following morning they attacked the crowds with missiles armed with cluster bombs. BBC say that at least 52 were killed including 5 children and nearly 100 seriously injured. The local hospital has been doing 40 operations simultaneously and fears patients will die because they don’t have enough blood for transfusions.

The Ukrainians should stick to their tough line in any further talks. Putin plays for time while his forces regroup. Frankly, judging by the mess the Ukrainians will have to clear up around Kiev, the Russians withdrew because they were well and truly beaten. As the Director of GCHQ, Jeremy Fleming, told an Australian audience last week, Putin may not know the real situation in Ukraine.

Zelensky’s willingness to abandon an ambition to join NATO does not say much for Joe Biden, unless it’s a negotiating ruse to get more help from NATO members. Moreover, when negotiating with Putin, it’s a mistake. He fears a democratic Ukraine in NATO, he doesn’t fear one in the EU. The latter are in his pockets.

Zelensky’s address to the UN Security Council applies just as much to NATO – led by the timid Biden White House.

The Times reported that T 72 tanks had been spotted loaded on a train from the Czech Republic to Ukraine. Strela 2 missiles are being supplied as well. UK plans to supply armoured scout vehicles, also medium artillery which has long range and heavy shells. However, the artillery needs the means to spot its fall of shot – does it hit the enemy guns or tanks? UK will have to assemble the whole package and train the Ukrainians.

The latter sent a high level delegation to the UK last week for this purpose.

News of atrocities by Russia around Kiev is causing a surge of refugees from eastern Ukraine. Not surprisingly they want to get away before the next Russian attack.

Boris has a rare opportunity to show what Brexit Britain can do – and himself.  His Chancellor needs to wake up to world politics and maybe domestic as well.

This Is No Time for Tunnel Vision

I’ve never disputed the remark made by former Secretary of Defense Robert Gates that over four decades Joe Biden has called wrong every big foreign policy decision.   In fairness to Biden, the reduction of the US Army (enough capacity to fight two major wars and one regional war, reduced to enough for one major and one regional war) was made by Trump against a background where Europe had effectively disarmed, Germany and France busily investing in Putin’s robber state.  Trump wasn’t alone. Sixty-three Republicans in the House recently voted against a resolution in support of NATO.

The UK has started to re-arm but Rishi Sunak and his Treasury gnomes still don’t understand what’s happening beyond the white cliffs. Rishi should draw hot intelligence from his TV set rather than Treasury and FCOD Remainers. Parliament and the liberal establishment have just received their ‘peace dividend’: invasion of Ukraine by Russia.  Putin knows Europe won’t fight back and the Brits aren’t strong enough to do it alone.  He calculates that Joe is a timid warrior with a big mouth.  For once I find myself agreeing with Vlad although it’s no pleasure.

Perhaps it’s a blessing in thin disguise but this crisis has exposed that maybe NATO is near the end of its shelf life.

Russia, the USA and U.K. have been the security guarantors of Ukraine since the end of the Cold War.  This followed a remarkable act of teamwork and trust by all four countries – dismantling the Ukraine’s Soviet era nuclear arsenal of over 4,000 weapons.  Putin destroyed that trust for a long time to come when he invaded the Crimea and eastern Ukraine in 2014.

I’m no fan of the EU and thought Baroness Ashton was stirring up trouble for Kiev; however, be in no doubt that Russia’s generals slavishly follow Putin’s long term plan to restore the frontiers of the Soviet Union by force.  The Ukrainians have been under attack from Putin’s version of Russia ever since 2014 and expected further invasions.

There is strong evidence from the Ukrainians that China supported Putin’s invasion with cyber attacks that began during the Winter Olympics and reached a peak the day of the invasion including attacks on the border guards and nuclear regulators in power stations. To me this deserves their expulsion from the UN Security Council.

Only the USA, UK and Canada helped train the Ukrainian forces after the invasion of Crimea in 2014.  According to the Sunday Times, Ben Wallace had a long fight with our diplomats and had barely sent the first consignment of missiles before the Russians invaded.

NATO members may fall by the wayside.  Germany and France lobby for an EU defence pact.

Poland has declared its willingness to store nuclear weapons on its territory for the United States. Finland and Sweden are thinking about joining NATO, particularly after the shocking atrocities carried out north and east of Kiev by the defeated Russian Army.

I would rather see a new global alliance of willing democracies, both great and small.

America’s help is hampered by Joe Biden’s caution and to me, slow surrender to the ageing process. His walking worried me when he arrived at NATO HQ for a summit. He was very confused for several minutes at a White House reception for Obama. As for the NATO summit, Biden’s speech sounded sheer hypocrisy to my ears.

The Pentagon fears that with his back to wall, Putin may use chemical or biological weapons on Ukrainian civilians. Any such attack is against NATO as well. Although Putin makes a lot of noise I think he knows what will happen to Russia if he uses a mini nuclear weapon.

The Ukrainians need long range strike weapons, capable of attacking groups of troops – such as artillery crews who presently don’t take cover, massed armour and infantry, aircraft and bases, ships and ports, both within Ukraine and inside Russia.  The Ukrainians can only help Mariupol by a big counter attack that drives through the rear of the Russians besieging the city. Fortunately the NATO meeting early last week drew the sensible conclusions and the Ukranians will be armed with most of what they’ve been asking for.

The Times reports that Czech Republic has sent T 72 tanks by train and is supplying Strela 2 manpad SAMs. The Czechs have about 90 T 72s but I have no figure for their inventory of Strela 2 SAMs.

There are big problems with a no fly zone over Ukraine. Russia has long range air defences well inside its western marches, radar and SAMs able to shoot down aircraft flying over Ukraine or NATO territory. Russian radars and ground to air defences would demand destruction. NATO could do it but a no fly zone immediately involves a full air war with Russia. Zelensky knows this and Ben Wallace and MOD are doing the smart thing by supplying our new SAM.  Already there reports that Starstreak has shot down its first Russian helicopter. The Ukrainians took a week rather than three to learn how to fire it. As the missile is guided by the firer with a laser it’s not easy to dodge and can shoot down fighters and missiles.  Night flights will become much more risky for the Russians.

None of which makes sending the Ukraine all those old Soviet Mig 29 fighters a step change – given that US and Brit missiles have taken out dozens of fighters and missiles, not to mention 600 of Putin’s tanks. During a recent attack only 8 cruise missiles reached targets in western Ukraine – the other 62 were shot down by missiles we and the Americans provided.

Nevertheless, those Mig 29s and longer range artillery and missiles are as urgent as some tanks.  After defeat around Kiev – the Ukrainians need some air power to turn these defeats into modern Falaise Gaps – Putin is regrouping to try to cut off the Ukrainian forces in the east. To illustrate the absurdity of the Biden doctrine, which sounds as though it’s been ditched at last, the USS Harry S Truman has been launching around ninety sorties a day, some flying all the way to Lithuania. Rather than write a precis may I offer a link to US Naval Institute News which has a video and photos as well as a report.

Russian Aggression Must Be Defeated

Sanctions have hurt Russia but the split in NATO caused by Germany’s political and economic self interest has become much more visible. France has been caught as by far the main EU supplier of weapons to Russia.  The Times last week carried a story reporting how the Baltic states are critical of Germany leading a move to water down sanctions, particularly for energy supplies and minerals to keep their industry going. Scholz has made announcements which are in line with the German Army’s Plan 2040 – put it this way, I may bang on about it, but nobody in Scholz’s coalition has announced that Vorausshau 2040 has been spiked.

Sanctions are all well and good and should stay for the foreseeable future but this crisis will be resolved on the battlefield. There remains a danger that despite NATO leaning backwards to avoid a direct clash with Russian forces, some Russian foul up or foul deed will bring about a situation where NATO inevitably must respond.

The Ukrainians say they did not attack oil tanks in Russia. Perhaps it was a false flag stunt before the Russians fired missiles at oil storage in Odessa.

The poor performance and lack of discipline among the Russian troops and the mass graves all go together.  One grave had the bodies of mutilated children alongside adult men and women. Bodies and houses are booby-trapped. That indicates an attempt to hamper or slow their pursuers after losing a battle. The Americans and the EU are sending forensic experts to help the Ukrainians investigate the murders of so many civilians.

The Red Cross depot in Mariupol was attacked by aircraft and artillery early last week, most likely deliberate and intended to destroy the ICRC’s stock of medical supplies as part of Russia’s war mostly against civilians.

Judging from the kill rates of their soldiers, tanks and APCs, downed missiles and aircraft, one could argue that were there no Russian nuclear deterrent, NATO had an opportune moment to destroy the Russian conventional armed forces. One Ukrainian pensioner lady said the Russians were shabby and so disorganized that they abandoned ten tanks and BMDs at the local garage – which had no petrol or diesel.  Why not then also give the Ukrainians missiles such as Patriot against aircraft, missiles such as Brimstone and Harpoon to take out the Black Sea fleet, plus long range drones to hit Russian aircraft on the ground?

We have to use our imagination to help the people of Ukraine win and keep their freedom.